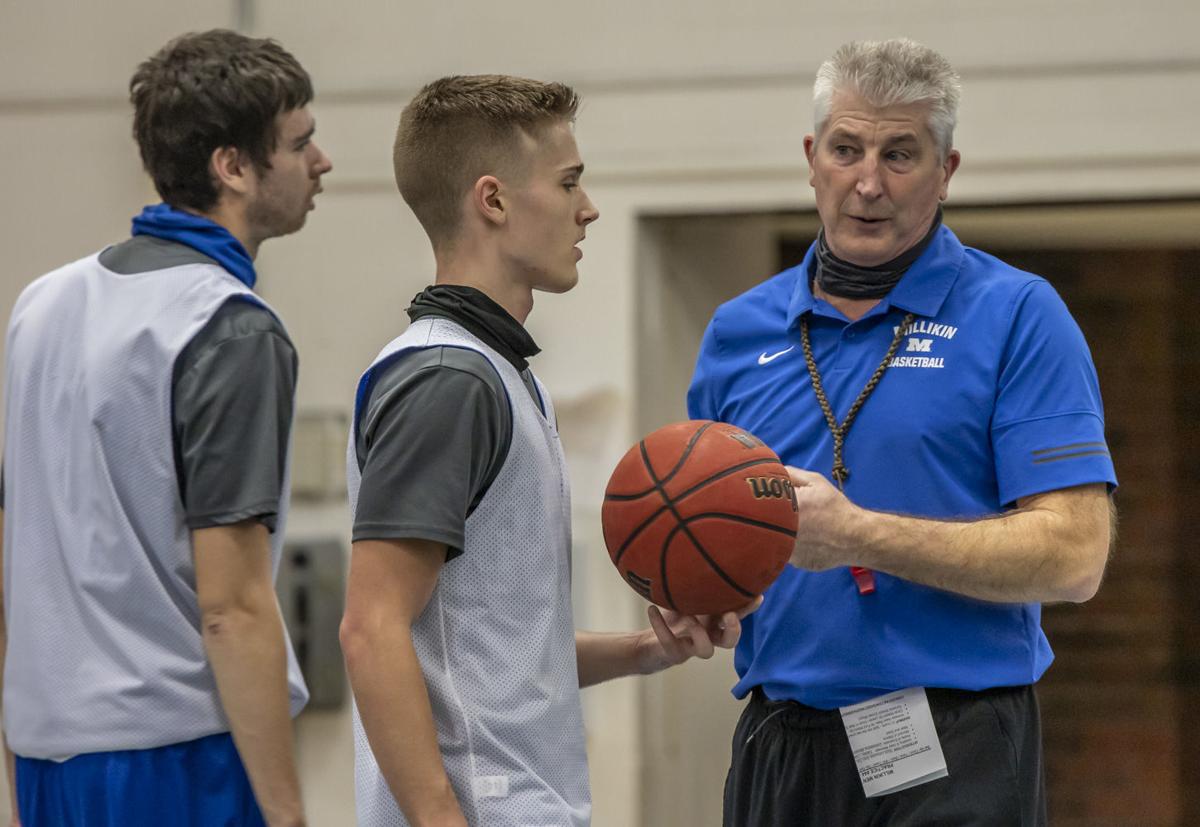 Millikin men's basketball head coach Mark Scherer talks to players before the start of practice last week at Griswold Center. The Big Blue return to action on Jan. 23 against Carthage. Visit www.herald-review.com to see a video from the practice. 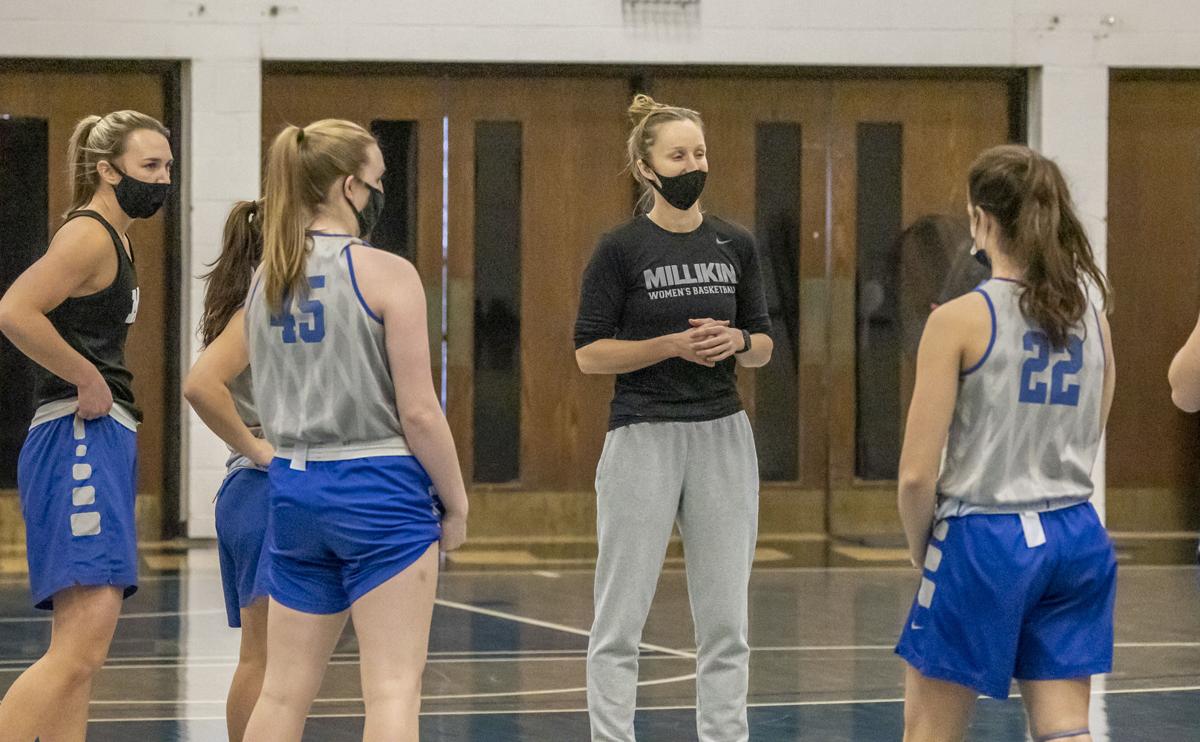 Millikin women's basketball head coach Olivia Lett talks to players before the start of practice on Friday at Griswold Center. Millikin returns to action on Jan. 23 against Carthage. Visit www.herald-review.com to see a video from the practice.

DECATUR — The Millikin men's and women's basketball teams open the 2021 season against Carthage College at the Griswold Center on Jan. 23.

The abbreviated basketball season will run from Jan. 23 through Feb. 27. Millikin faces Carthage on Jan. 23 at home and then heads to Kenosha for an away game on Jan. 25. The following week the Big Blue face Wheaton at home on Jan. 28 and away on Jan. 30. Using the same home-and-away format, they will then face Augustana (week of Feb. 1), North Central (week of Feb. 8), Elmhurst (week of Feb. 15), and Illinois Wesleyan (games on Feb. 16 and Feb. 23).

The realization that the season is about to start has motivated the women's team said head coach Olivia Lett.

"There is definitely a renewed energy in practice and that is fun to see. (During the holiday break), we have been working on getting better individually, doing that both on and off the court, but it is nice to actually feel you are preparing for something now," she said. "It is going to be a quick get ready (period) for some of the games but I think our kids did a good job after preparing themselves during winter break and trying to stay in shape."

In a typical season, the CCIW portion of the schedule follows several non-conference games and allows opposing teams the chance to get some in-depth research on playing tendencies. All that is out the window this season.

"We are big on really trying to focus on us and play our game. For us, it is a little irrelevant who we play to start off the schedule," she said. "We will go in there and try to do what we do. I think Carthage year-in and year-out is a very strong team on the women’s side. They are very well coached and I know they will be prepared. We will try to focus on what we do."

Each CCIW team will also have two bye dates throughout the schedule and both the Millikin men's and women's teams will conclude the regular season with byes in the final week (Thurs., Feb. 25 and Sat., Feb 27).

"I prefer the byes at the end of the season because the mindset of the guys is that we want to play and I think we will get into the rhythm of the new schedule," Scherer said. "I think routine is really important to a college athlete and I think it will be best. Hopefully, we will have a break before the conference tournament, come in in the top half of the conference and go from there."

Before the byes, Millikin plays six games in 12 days and Lett believes the team she has constructed will be up for the challenge.

"I think our depth in playing the back-to-back games could benefit us just because we are a lot deeper than what we were last year," she said. "It is going to be an interesting wrinkle with not a lot of time to really go over what happened the game before to make changes but I hope that is something that plays to our advantage.

"I think we are just excited to play and we are trying to not worry about the little parts of the schedule. We're going to show them that it doesn't really matter how the schedule is set up, we are going to come and play every night."

Schedules for the other fall sports moved to 2021 — football, men's and women's soccer and women's volleyball — will be released by the CCIW next week. Volleyball is tentatively slated to start in late February and March for football and soccer. A spring cross country schedule is also yet to be determined.

The wrestling season is slated to run three weeks with the CCIW Championships scheduled for Feb. 13.

St. Teresa multisport athlete Addison Newbon has been a standout in both basketball and volleyball throughout her high school career.

It is easy to focus on the limitations that the COVID-19 pandemic has brought the Millikin men's basketball team this season.

Maryland men's basketball team only made three of its final 13 shots, but the last two baskets were daggers to the heart in the Terps' 66-63 upset of the No. 12 Illini at the State Farm Center on Sunday.

Millikin University's basketball team is really looking forward to playing some actual games, and new saliva-based COVID-19 testing which started at the university on Monday will help make that possible.

Millikin has set its football schedule, but is still finalizing volleyball and soccer.

It was the start to a season that players and coaches dream about.

Millikin men's basketball head coach Mark Scherer talks to players before the start of practice last week at Griswold Center. The Big Blue return to action on Jan. 23 against Carthage. Visit www.herald-review.com to see a video from the practice.

Millikin women's basketball head coach Olivia Lett talks to players before the start of practice on Friday at Griswold Center. Millikin returns to action on Jan. 23 against Carthage. Visit www.herald-review.com to see a video from the practice. 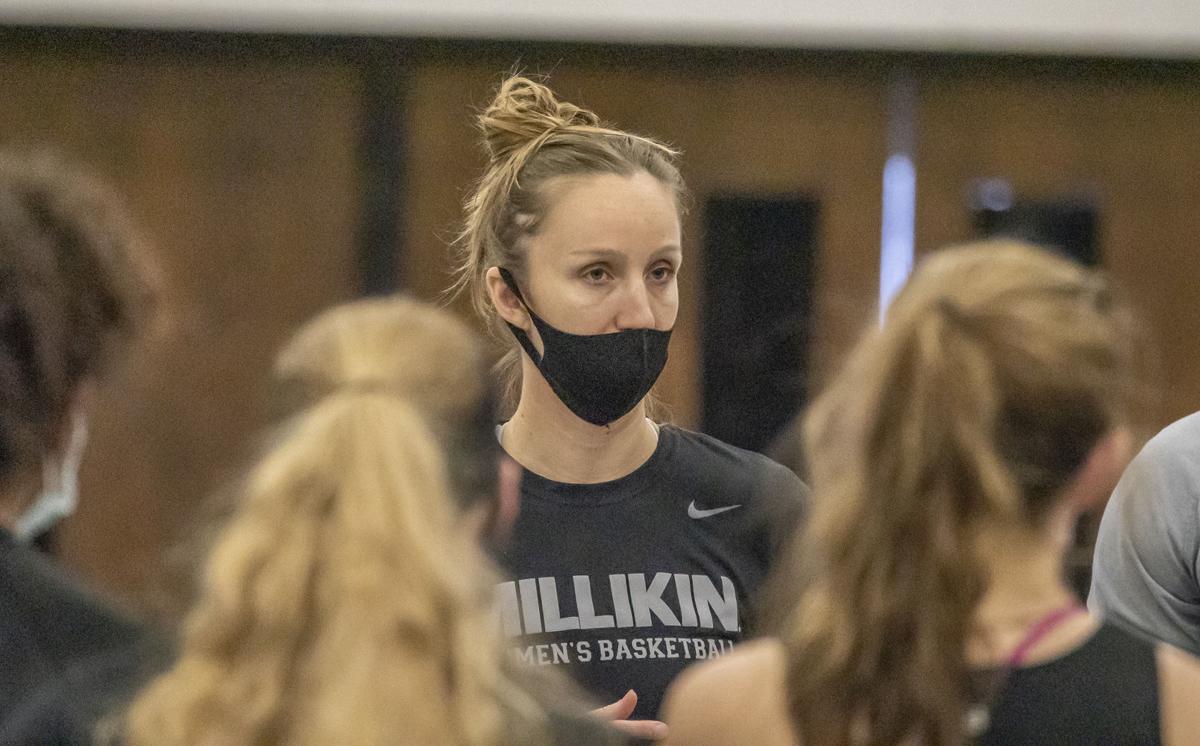 Millikin women's head coach Olivia Lett talks to players before the start of practice on Friday at Griswold Center. Visit www.herald-review.com to see a video from the practice.