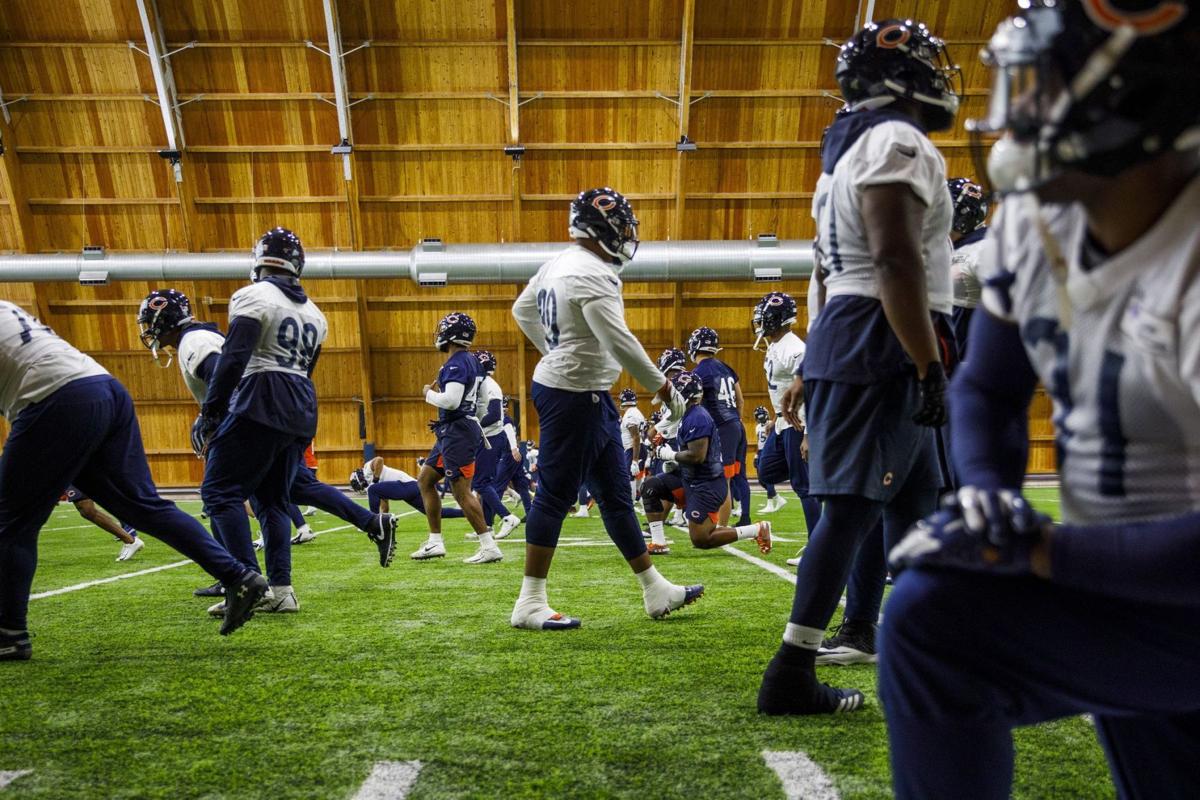 Bears players will be space out more at Halas Hall practices, and individual drills might involve less contact. 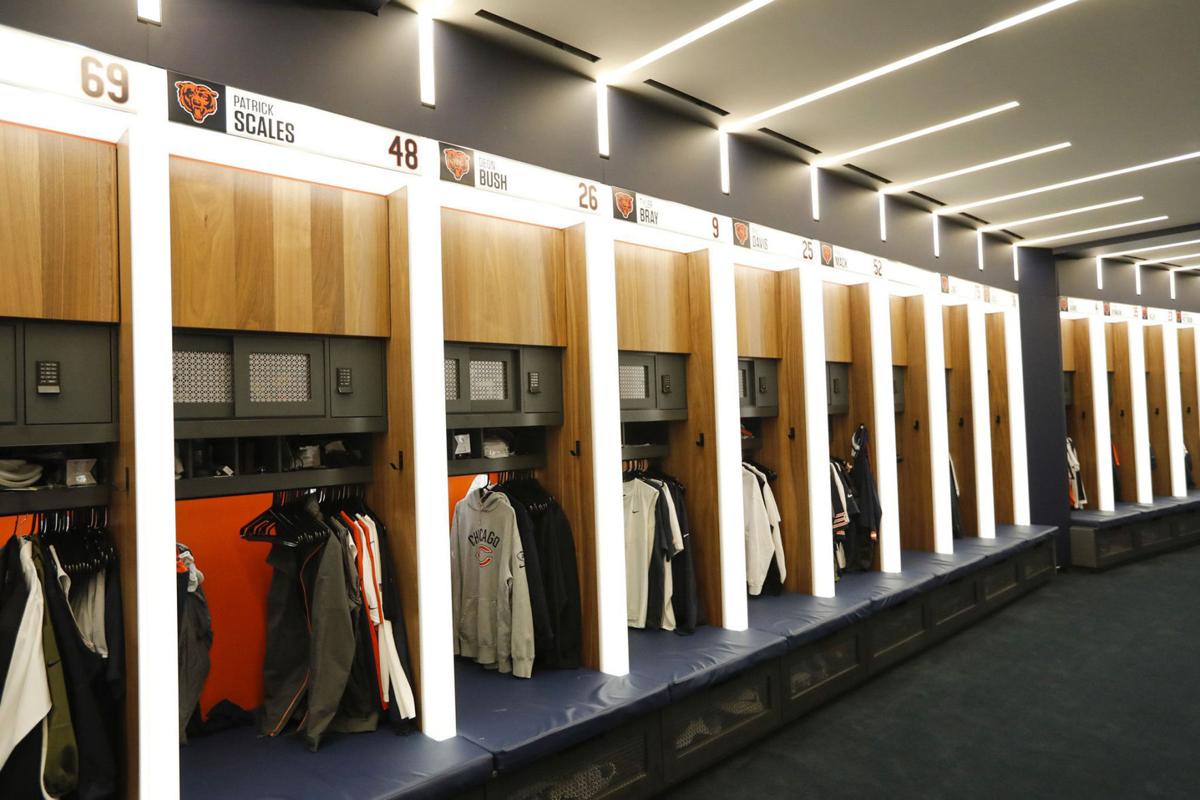 The Chicago Bears locker room during a media tour of the Halas Hall expansion on in August 2019, in Lake Forest. The NFL asked all teams to require physical distancing of at least six feet between individuals inside team facilities and to reconfigure their locker rooms to provide adequate spacing for everyone amid the coronavirus pandemic.

CHICAGO -- Chicago Bears Infection Control Officer Andre Tucker spoke with reporters on a Zoom call Wednesday morning to detail the team’s plans to prevent the spread of COVID-19 within Halas Hall this year.

Tucker, who is also the Bears head athletic trainer, is the team’s first point of contact when a player or staff member tests positive for COVID-19. He oversees club screening protocols and its disinfection program and has helped with coronavirus education for team employees.

He also aided the development of a plan that general manager Ryan Pace said goes “above and beyond” to help make the players feel safe.

“I really believe we have the best setup in the NFL in regard to how we’re handling this,” Pace said. “And then we know there’s going to be challenges that we’re going to have to adapt for. These are uncertain times, but I think that’s a great strength of coaches is just the ability to adapt when things are happening in real time. And that’s what we’ll do.

“I just want to stress what we’ve done with our facility. We have an advantage with our square footage, and then (it was) just being creative with how we’ve set up all of our work rooms and how we’ve spaced out. There’s been a lot of hands on deck making that happen.”

As Bears players report for training camp, here’s a synopsis of how Tucker said Halas Hall will be different this year.

What do players need to do each day before they can enter Halas Hall?

Safety protocol each day begins as soon as players wake up.

They must take their temperature twice, and it must be 100.4 degrees or lower. They then log into a Bears app to take a four-question screening test. If they pass both of those screens, they will receive a color-coded day pass and can travel to Halas Hall.

Upon parking in their designated spot at the facility, players go to the BioReference Laboratories trailer on Halas Hall property. The trailer has five testing bays where officials can administer PCR and antibodies tests. The testing process takes five to 10 minutes per player, and Bears tests are sent to a lab in Minnesota that is supposed to deliver results within 24 hours.

The NFL is mandating tests every day for the first two weeks. If a team’s positivity rate is below 5% after those two weeks, testing will move to every other day thereafter during training camp, as long as the rate remains below 5%.

After testing, players go through a touchless entry into the team facility.

They can visit a PPE station with face masks, hand sanitizer and gloves and take their temperature one more time at a thermal mirroring facial recognition scanner. They pick up their Kinexon proximity tracker, which will help the NFL with physical distancing and contact tracing, to wear all day. They then can get to work on their football activities.

How has the layout of Halas Hall changed?

All of the Bears’ high-traffic areas have been reconfigured to follow social distancing guidelines.

Players’ lockers have been spaced out, and the Bears converted the players lounge to an additional locker room to create more space. In the players’ bathrooms, every other shower head has been turned off, and plexiglass partitions have been added between urinals.

The Bears will use a second weight room at the Walter Payton Center practice facility so that two groups of 15 players can lift at the same time. Players are assigned their own racks and workout equipment.

In the training room, treatment and rehab will be done by appointment only, and partitions separate the taping tables and rehab equipment.

Tables and chairs in the cafeteria have been spaced out, and buffet-style dining is no longer permitted. Meals will be prepackaged.

Capacity in meeting rooms has been cut in half, and the team meeting room will be inside the Walter Payton Center, where appropriately spaced chairs, tables and video monitors have been set up.

What will be different at practices?

Coach Matt Nagy said full practices might not look all that different, but there will be some changes.

To start, there’s a longer ramp-up period than normal during training camp because the players have not had any on-field time together this year. After testing and physicals are completed, players will have eight days of strength and conditioning periods and walk-throughs. After that, there will be four days of practices without pads before the first padded practice Aug. 17. Teams will have 14 padded practices.

Some safety precautions can be taken during the practices. Individual drills might involve less contact. Team personnel can spread out around the entire field when they’re on the sideline to ensure social distancing, and everyone can wear face masks when they’re not on the field.

The Bears are encouraging players to wear the NFL’s newly developed face shields to pair with their helmets, though they are not mandatory. The equipment is designed to prevent the transmission of respiratory droplets.

There has been talk around the league about keeping a third quarterback quarantined in case of a COVID-19 outbreak. Pace said the Bears have talked about potentially keeping the third quarterback separated in meetings and also making sure position groups aren’t lifting together to help prevent the spread of the virus within one group.

What type of education will Bears players receive about COVID-19?

Pace, Nagy and Tucker all stressed the importance of making sure players and their families are educated about their responsibility to maintain best practices to help prevent a COVID-19 infection.

The Bears have signage all around the facility to serve as reminders, as well as on the floors of the team hotel where the rookies are being housed during training camp. The team also will hold virtual meetings with players and their families for such education.

“You don’t want to make it so specific or cookie-cutter that they now get into a situation where they’re like, ‘Shoot, this wasn’t addressed. What do I do?’” Tucker said. “I think I’m going to continue to educate and tell everyone -- not just the players, right? -- take a deep breath. Ask yourself the situation you’re putting yourself in, is the risk worth the reward? And trust your gut. If you’re hesitant about it, don’t do it.”

Tucker said planning will be important for families, including knowing what they will do if a family member tests positive.

“The most at-risk I think we are is when everybody leaves Halas Hall at the end of day,” Pace said. “It’s not just the players -- it’s the staff, everybody. That goes back to educating our players and staff. ‘Don’t make selfish decisions when you leave here. You owe it to your counterparts and you owe it to your teammates to make the right decisions as we go through this season.’ ”

Remember that ire in Matt Nagy’s face, the irate tone, the contentious incredulity?

It's hard for Josh Kreutz to recall the exact moment he first met Lovie Smith.

CHICAGO — The Chicago Bears made 13 of their assistant coaches available to the media this week, a Zoom Q&A binge that offered progress re…

‘Helping other people is more important than ever.’ Lovie Smith’s Illinois staff has 8 black coaches — more than any FBS program. Can it be an example that helps close the racial disparity in college football?

Like most young boys for generations in Texas, Lovie Smith rooted his heart out for the Dallas Cowboys on Sundays.

Mitch Trubisky says he’s in ‘a good mental space’ as he readies for the Chicago Bears QB competition. What else is he doing to prepare?

Mitch Trubisky knows not to send a group text.

With virtual OTAs underway, 10 things the Chicago Bears would be evaluating — if they were on the field

With organized team activities underway and minicamp scheduled for June 22-24, valuable time on the field will be conducted in a virtual world…

It’s the first of August and that means it’s time to be out in the woods in pursuit of some squirrels. The population seems to be high and the mast trees (nuts) look to me in fine shape with lots of acorns, walnuts, and hickory nuts.

Bears players will be space out more at Halas Hall practices, and individual drills might involve less contact.

The Chicago Bears locker room during a media tour of the Halas Hall expansion on in August 2019, in Lake Forest. The NFL asked all teams to require physical distancing of at least six feet between individuals inside team facilities and to reconfigure their locker rooms to provide adequate spacing for everyone amid the coronavirus pandemic.