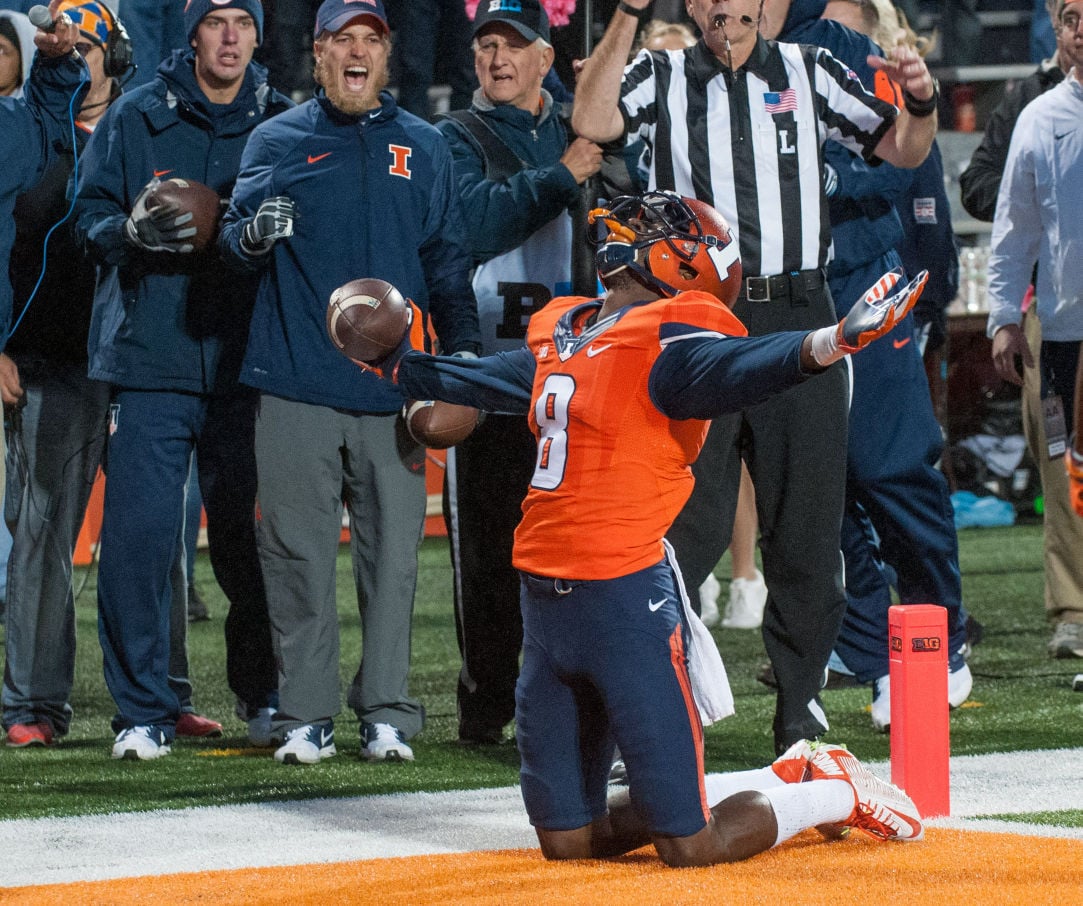 Illinois wide receiver Geronimo Allison celebrates his touchdown in the closing seconds of the fourth quarter to tie the game against Nebraska on Saturday. After the extra point, Illinois won 14-13. 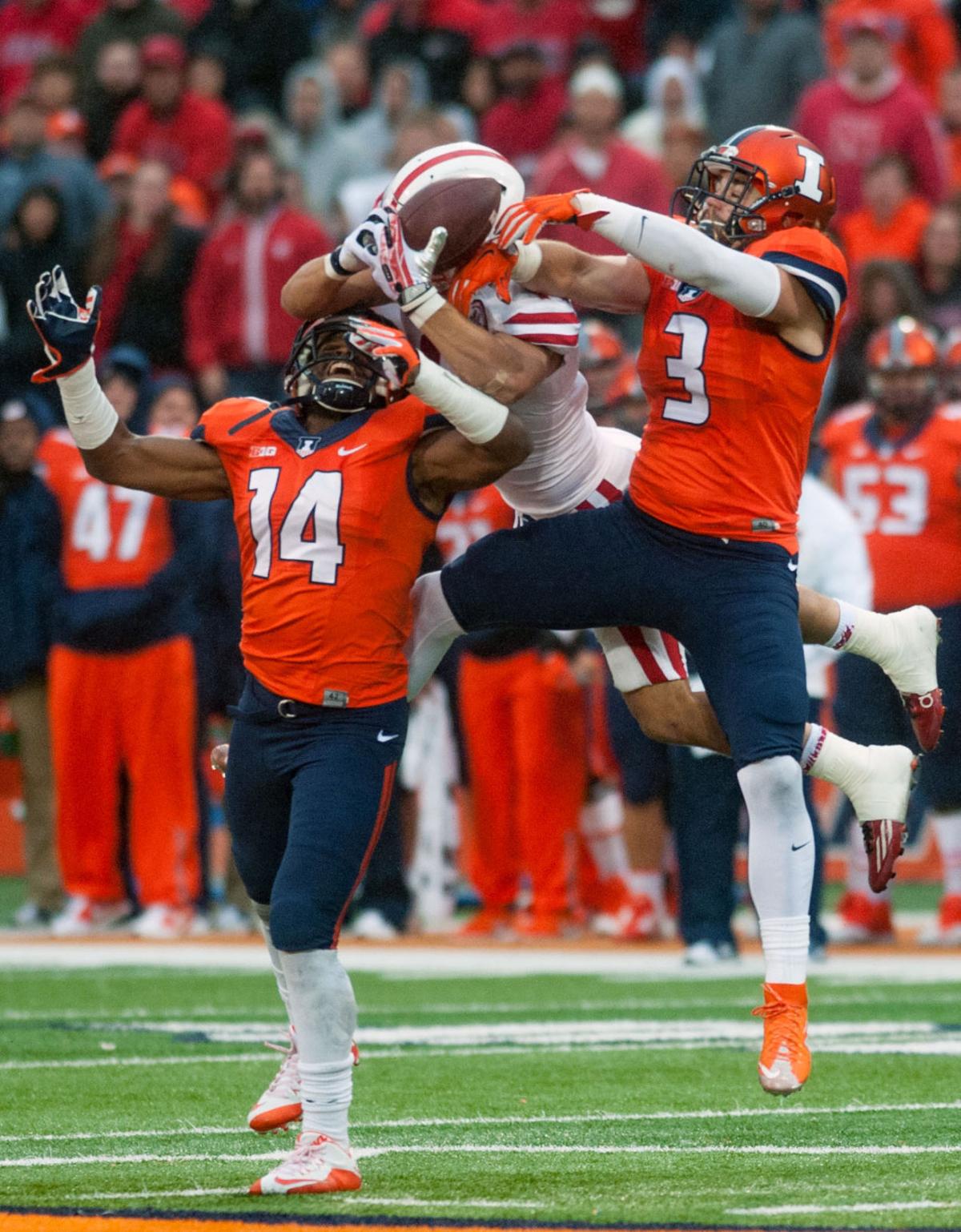 Nebraska wide receiver Jordan Westerkamp has a pass broken up by Illinois safety Eric Finney (14) and defensive back Taylor Barton (3) during the fourth quarter.

CHAMPAIGN — There were 38 seconds to play and Illinois trailed by six points, still 57 yards from the Nebraska end zone when quarterback Wes Lunt told wide receiver Malik Turner he was about to become a hero.

“I told Malik before the play, ‘Just run your butt off because you’re going to be open,’ ” said Lunt, who promptly threw a 50-yard strike that got the ball to the Nebraska seven.

From there, Lunt fired five end zone passes to Geronimo Allison, two of which resulted in pass interference penalties. Finally, with 10 seconds to go, Lunt found Allison on a diving catch near the pylon and Illinois rallied to stun Nebraska 14-13 at Memorial Stadium.

Illinois missed out on a number of chances and trailed 13-0 entering the final period. Finally, Lunt found Marchie Murdock with a 22-yard touchdown pass early in the fourth quarter. And when Nebraska turned the ball over on downs with under a minute to play, Illinois was given one final chance.

Acknowledging that this is the kind of game Illinois has traditionally lost, Lunt said it was a testament to a resilient team that has learned how to battle through adversity.

“Nebraska is a storied program, so for us to keep fighting to the wire, that’s a big win for us,” Lunt said.

The victory makes the Illini 4-1 overall, 1-0 in the Big Ten West going into next week’s game at unbeaten Iowa, which knocked off Wisconsin 10-6 Saturday. Nebraska slips to 2-3 overall, 0-1 in the Big Ten.

Lunt and his receivers may have been the heroes at the end, but it was a day-long performance by the Illini defense that drew praise from interim head coach Bill Cubit.

“No doubt, the key was our defense,” Cubit said. “This is the first time since I’ve been here that the defensive line looks like a Big Ten line. And he was the leading passer in the Big Ten.”

Nebraska’s Tommy Armstrong Jr. entered the game as the only quarterback in the Big Ten averaging more than 300 passing yards per game. Against the Illini on a windy day, Armstrong completed 10 of 31 passes for 105 yards and was picked off by safety Clayton Fejedelem. Nebraka’s offense, averaging 519 yards per game, was limited to 292.

Nebraska’s points came on a 19-yard touchdown run by Devine Ozigbo in the second quarter and a pair of field goals by Drew Brown, the second of which came with 2:55 to go in the third quarter and put the Huskers up 13-0.

But the Illini found an answer, despite having lost leading rusher Josh Ferguson to a shoulder injury in the first half. Ferguson never returned, which left all of the running back carries to freshman Ke’Shawn Vaughn (24 carries, 98 yards).

After Illinois scored on the Lunt-to-Murdock touchdown pass, Illinois had a chance. But that chance appeared to be slipping away when Illinois could not move the ball and punted to Nebraska with 4:38 to play.

The Huskers turned to fullback Andy Janovich, who bulled his way for two first downs and appeared to put Nebraska in position to run out the clock.

But on third-and-7 from the Illini 27, and with Illinois out of timeouts, Armstrong threw an incomplete pass, stopping the clock with 55 seconds to go. Had he run, at least 30 more seconds could have come off the clock, making the Illini comeback unlikely.

When Armstrong threw another incomplete pass on fourth down, Illinois got the ball back at its own 27. Lunt threw for 15 yards to freshman Sam Mays before the call came in to go deep to Turner.

“Before the play, (running backs coach and former Illini QB) Nate Scheelhaase said, ‘You know you have the wind at your back, so remember that,’ ” Lunt said.

“So when I threw it, I kind of felt like I shot-putted it. When I saw that safety react, I’m like, ‘Gosh, please get over that guy,’ and it worked out good. That was a big play.”

From the opposite sideline, Nebraska coach Mike Riley cringed.

“Well, I was surprised when somebody got that far behind us in that coverage,” Riley said. “I thought (Illinois) competed the whole game. It took them some plays to finally get into that rhythm, but they showed us when it was all on the line.”

Illinois missed two field goals and twice turned the ball over on fourth down before finally getting on the scoreboard.

One of those failed fourth-down plays was a surprise to Cubit and the Memorial Stadium crowd who rely on the down markers. On the opening possession of the third quarter, a mixup made most believe Illinois had come up short on third down and Cubit was prepared to punt when the officials realized they had lost track of down and distance.

They reviewed the sequence, then awarded the ball to Nebraska, telling an irate Cubit that his third-down run was actually fourth down.

Illini defense now a force to deal with

CHAMPAIGN – Numbers never tell the entire story, but in the case of an improved Illini defense they no longer document a very sad tale.

Illinois wide receiver Geronimo Allison celebrates his touchdown in the closing seconds of the fourth quarter to tie the game against Nebraska on Saturday. After the extra point, Illinois won 14-13.

Nebraska wide receiver Jordan Westerkamp has a pass broken up by Illinois safety Eric Finney (14) and defensive back Taylor Barton (3) during the fourth quarter.