During the 2018 season as Nagy's defensive coordinator, the typically no-nonsense Fangio sometimes would celebrate with his Bears defense when it forced a turnover in practice. He would run to his players and jump in the air with them, Nagy said, "think(ing) he looked cool, but he really didn't."

One time, Fangio kicked the celebration up a notch.

"He did a 'Ba-boom!' and spiked the ball on us," Nagy said. "It was on video. And the first thing he did was run into the video department and told them to delete that. But he forgot that I got 51% (of the vote), and I made 'em put it back in."

"I don't know what he's talking about," Fangio deadpanned.

Nagy and Fangio will meet again Sunday in Denver with bigger bragging rights on the line than in those practice battles. Each is searching for his first win of the season after disappointing openers for the Bears and Broncos.

Nagy's Bears offense flopped to open his second season with a 10-3 loss to the Packers. Fangio's NFL head-coaching debut wasn't any prettier in the Broncos' 24-16 loss to the Raiders.

Now each must try to rebound by matching wits with a coach who knows him well.

"That'll be the biggest question from everybody is how does Vic attack us, how do we attack him?" Nagy said. "In the end it really comes down to the players on both sides. And there will be some chess match going on between both."

In some ways, Fangio and Nagy are opposites across the NFL head-coaching spectrum: the old-school defensive stalwart and the young offensive innovator.

Fangio, 61, spent 32 years in the NFL, 19 as a defensive coordinator, before the Broncos gave him his first opportunity to be a head coach. Nagy, 41, went from working in real estate to becoming the 16th coach of the Bears in 10 years.

But there's a mutual respect from the year they had together.

Fangio praised Nagy as a play-caller with a "good imagination" who knows how to use his versatile players. Nagy said Fangio's experience was invaluable to him as a first-year head coach in 2018.

"For me coming in as a younger coach," Nagy said, "being able to rely on him for situational football and say, 'Hey, how would you look at this formation or this personnel grouping? How would you attack it?'. But really more so than anything, it was just trusting and believing the advice that he gave. You knew that there was merit behind it because of all his experience."

The Broncos are Fangio's eighth NFL team, so he had the opportunity to study the operations of several head coaches up close before he became one.

He said that helped this year with things such as organization, but he has found staying true to himself is the best route.

"If players that were with me in Chicago or San Francisco, if they were here now, (they) would tell you I'm basically saying a lot of the same things in a lot of the same ways," Fangio said. "Just talking to the whole team instead of half the team."

Players in Chicago talk of Fangio as a straight shooter who put his players in position to succeed and whose track record spoke for itself.

When he arrived with the Bears, Fangio joined John Fox in taking over a defense that in 2014 ranked among the bottom three in points and yards allowed. By the time Fangio left, the Bears had one of the most respected defenses in the league -- thanks in part to a collection of Pro Bowl-caliber players and in part to Fangio.

"When a guy like that speaks, you need to listen," Bears safety Eddie Jackson said. "I feel like he earns that respect from everybody."

Broncos outside linebacker Von Miller compared Fangio to a tough geometry professor -- someone who loves teaching and is good at and makes his students love his class even though it's difficult.

Miller said he already has developed an affection for Fangio's trademark gray sweatsuits.

"I haven't seen a coach that's up on fashion and has been great," Miller said. "All of the coaches that wear the same sweater and same shoes and really put ball first, those are great coaches. If you've got a coach that's up on fashion and all the new stuff, he's got to get his priorities in order. Coach Fangio is definitely not one of those coaches."

Nobody in Chicago is writing off the Broncos defense, even after it allowed Raiders quarterback Derek Carr to complete 22 of 26 passes for 259 yards with a touchdown, no interceptions and no sacks Monday night.

The wounds from the disastrous season debut for Nagy and quarterback Mitch Trubisky are too fresh and the esteem for what Fangio can do with a defense is too high.

"You can see that with his scheme there are a few tweaks here and there that are a little bit different," Nagy said. "The players are obviously different. ... But he's not changing anything. He's putting his stamp on everything he's believed in in the last 32 years."

Nagy said he didn't know if he and Fangio would talk this week until before or after the game as they're busy with preparations.

Fangio said he had fun watching the film of a strong Bears defensive effort against the Packers, and he expects to reminisce when he sees his former players during pregame warmups.

"I have a lot of fondness and good memories of being with those players," Fangio said. "I really liked being around them on a daily basis. And that's something that I'll never forget, and I appreciate that situation was there for me."

Something many Bears players won't soon forget? That jovial practice celebration of which Fangio pleaded ignorance.

"I do remember that," wide receiver Allen Robinson said. "Hopefully we get in the end zone, and there will be some balls spiked by us."

CHICAGO — Former Bears linebacker Lance Briggs is one of 122 modern-era player nominees for the Pro Football Hall of Fame's Class of 2020. 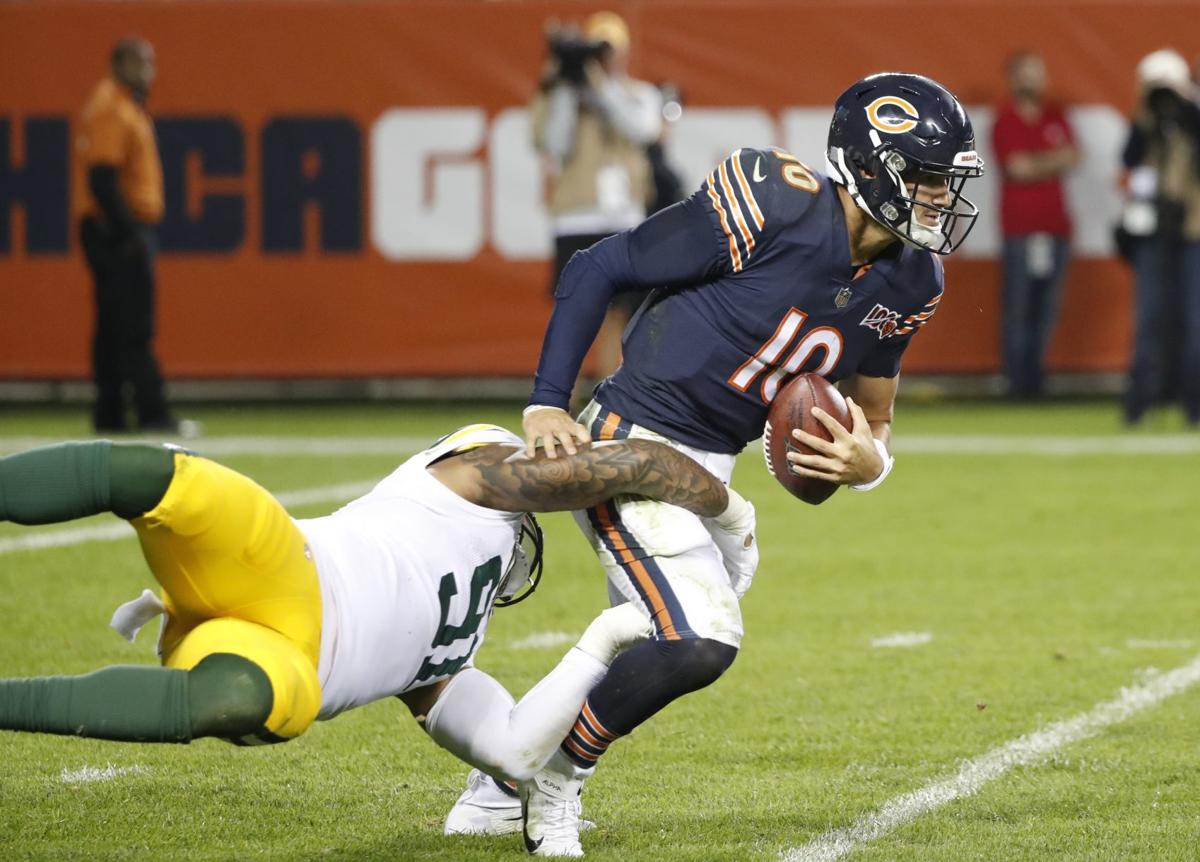 Green Bay's Preston Smith sacks Chicago's Mitchell Trubisky during the Packers' Week 1 win. The Bears will need to get their running game going to help Trubisky and the passing game. 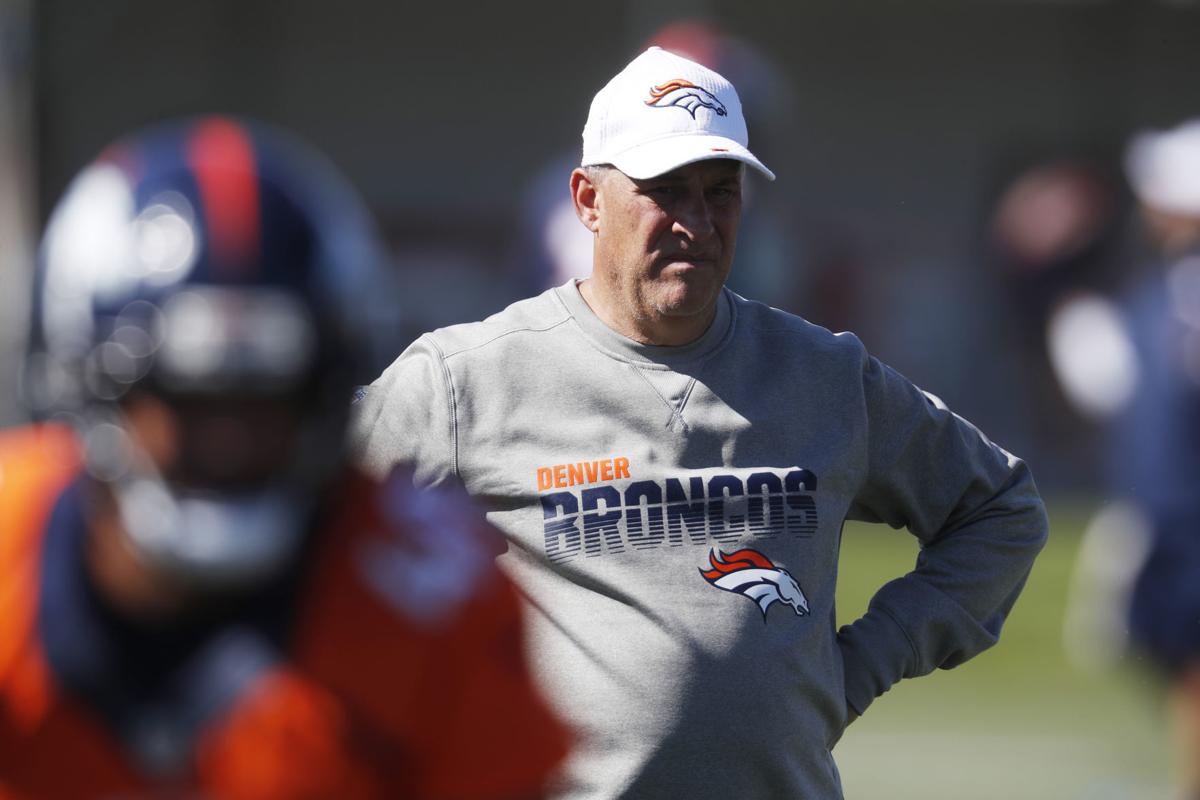