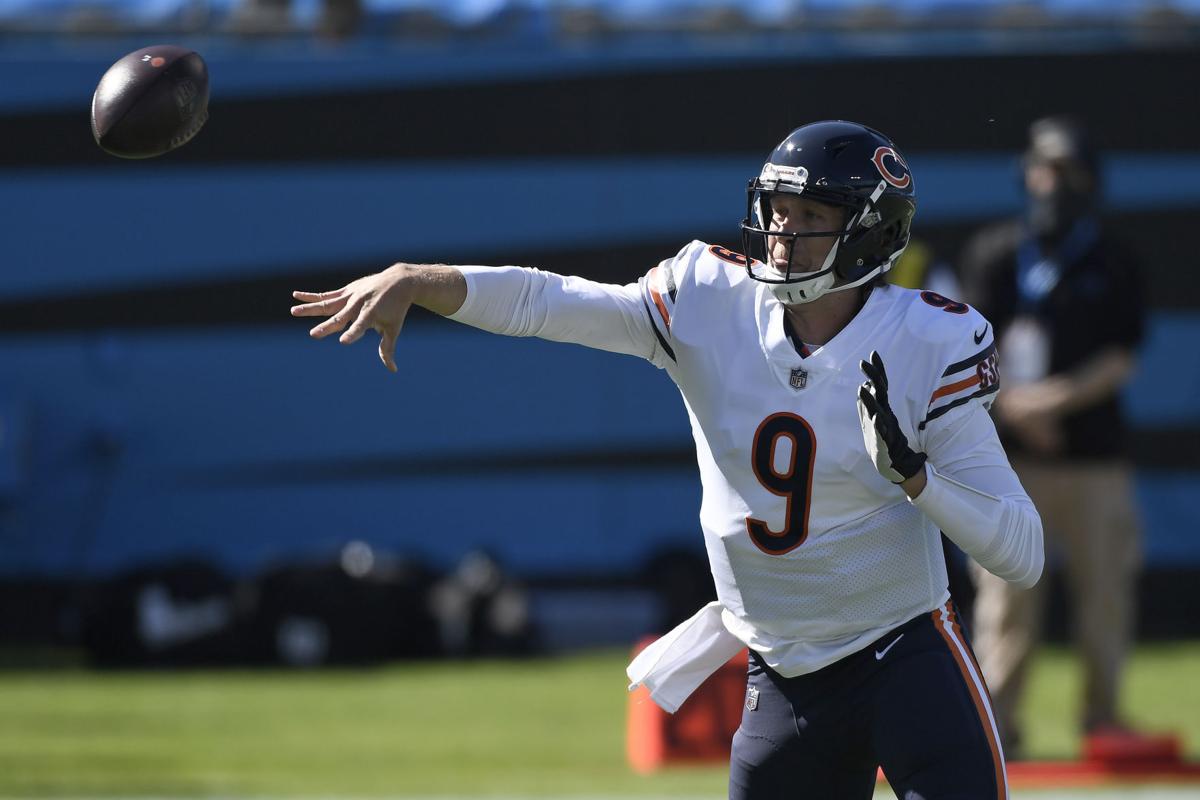 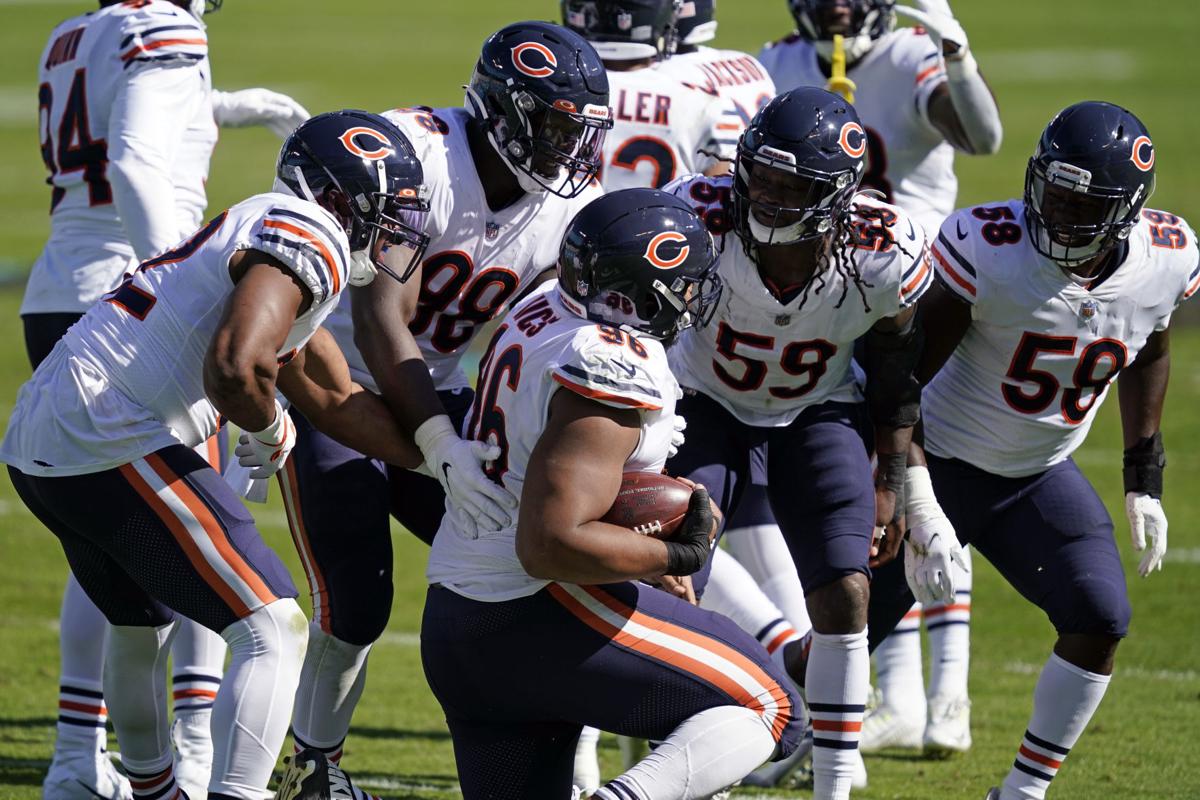 Chicago Bears defensive end Akiem Hicks (96) is congratulated by teammates following a turnover during the second half of an NFL football game against the Carolina Panthers in Charlotte, N.C., Sunday, Oct. 18, 2020. (AP Photo/Brian Blanco)

CHARLOTTE, N.C. — Chicago Bears coach Matt Nagy has found plenty to criticize about his team this season, even though Chicago keeps winning.

On Sunday, Nagy went out of his way to give credit where it was due.

“Hey, our defense played lights out today,” Nagy said. “They played awesome against a good offense.”

Nick Foles threw for one touchdown and ran for another, Chicago’s defense forced three turnovers and sacked Teddy Bridgewater four times and the Bears held on to beat the Carolina Panthers 23-16 on Sunday.

Once again, the Bears' 27th-ranked offense was just good enough to win.

Foles finished with 198 yards passing and a touchdown and David Montgomery added 58 yards on the ground as the Bears (5-1) opened the season 3-0 on the road for the first time since 2006, when they reached the Super Bowl.

It wasn't pretty, for sure, but Chicago improved to 2-1 with Foles as the starter. The 2018 Super Bowl MVP also rallied the Bears past the Falcons when Nagy benched Mitchell Trubisky in Week 3.

“Would you rather lose pretty or win ugly? I think that we’d rather win ugly,” Foles said. “We want to improve. We want to get better. We want to have rhythm. But ultimately in the NFL it’s about winning games. It doesn’t matter how you do it. It just matters that you get it done. If you put up 50 points and you lose a game, those 50 points don’t mean anything.”

Added Nagy: “The good thing is that we’re 5-1 and when we do get this thing clicking (on offense), it’s going to be a lot of fun.”

Receiver Allen Robinson said the offense is trending in the right direction.

“We haven’t had that breakout, explosive game but I think that is right around the corner," said Robinson, who had five catches for 53 yards.

In the meantime, the Bears' defense has been special.

Chicago limited Carolina to 303 yards and the Panthers were 3 of 13 on third down conversions. Bridgewater was held to a season-low 216 yards passing and was intercepted twice. He was forced to scramble out of the pocket eight times while trying to avoid pressure.

Still, the Panthers (3-3) had two chances to tie the game in the final 2 minutes.

On a fourth-and-2 from the Bears 36, D.J. Moore couldn’t haul in a one-handed catch on a pass that was slightly overthrown. Carolina’s defense came up with a stop, but safety DeAndre Houston-Carson intercepted Bridgewater on Carolina's next possession to seal the win.

“Great football teams capitalize in those two situations and we didn’t do that today,” Bridgewater said.

The Panthers' struggles started from the opening kickoff, where they were flagged for an illegal block.

Mike Davis then lost a yard on the first carry, Bridgewater was sacked at the Carolina 1 and then intercepted by Tashaun Gipson on third down. That set up a 9-yard touchdown pass from Foles to rookie tight end Cole Kmet to give the Bears a 7-0 lead.

“We got knocked off course from the opening kickoff and it was like we never got back on track,” Bridgewater said. "This game can humble you. It’s good for us and we can learn from it.”

Kmet's first NFL touchdown was extra special because his mother was among the 5,240 fans in attendance, with spectators limited by the COVID-19 pandemic.

He knew she was on her way to see his sister, who's attending school in Florida, and he landed her a ticket — not knowing for sure if she would make it. But she flew to Charlotte on Sunday morning.

“I saw her up there," said Kmet, who had one catch for 12 yards coming into the game. "She was waving like a mad woman up there in pregame. I found her and gave her a little wave. She was pumped up.”

With the Bears struggling to generate offense, Nagy turned to an up-tempo approach late in the first half.

“We had to change something up,” Nagy said. “It was first and 10 and then second and 11 — and something wasn’t working. So we said let's test it out and it worked.”

The Bears improved to 3-0 against the NFC South this season with wins against the Falcons, Bucs and Panthers. They look for the sweep on Nov. 1 when they host the Saints.

Ten Bears players and five Panthers knelt for the playing of the national anthem while several others held up their fists in protest of racial injustice.

Panthers: Played without wide receiver Curtis Samuel, who was listed as questionable with a knee injury. ... Safety Juston Burris was carted off the field late in the third quarter with a rib injury and did not return.

Bears: Travel to face the Rams on Monday, Oct. 26.

Bears coach Matt Nagy has found plenty to criticize about his team this season, even though Chicago keeps winning.

Brad Biggs: The Chicago Bears are in 1st place despite almost no help from the offense. Matt Nagy still is trying to figure out the 'why' part, and this will be a flawed team until he does.

Matt Nagy made a rare appeal to respect what the Chicago Bears defense has done. Pity he can't call a game to do that as his offense continues to struggle.

Mike Sielski: The secrets of Travis Fulgham's wild and unlikely journey to the Eagles

Son of diplomats. Lived all over the planet. Didn't play football until he was 16. Walked on at Old Dominion.

From Brit Miller to Sid Gepford, here's the complete list of NFL players from the Herald & Review area.

Chicago Bears defensive end Akiem Hicks (96) is congratulated by teammates following a turnover during the second half of an NFL football game against the Carolina Panthers in Charlotte, N.C., Sunday, Oct. 18, 2020. (AP Photo/Brian Blanco)