The American Legion has been the unofficial training academy of MLB players, and has produced hundreds of players who are Hall of Famers or will be, including Stan Musial, Frank Robinson, Reggie Jackson, Eddie Murray, George Brett, Roberto Alomar, Mike Piazza, Albert Pujols and Kris Bryant.

"For people like me, it is kind of nice for our kids to get to do the same stuff," said Forlines, who coaches Shelby County's American Legion team. "We hope that we can continue. If you look at MLB rosters, they are chalk full of kids that played Legion baseball. I hope it doesn't go away. Travel ball has it place, but I don't want this kind of program to go away."

That number took an even bigger hit post-COVID 19. According to a story in the Galesburg Register-Mail quoting Department of Illinois Baseball Chairman for American Legion Baseball Don Wallace, there were 200 teams statewide in 2012, 137 in 2019, and now just 57, plus 23 "junior squads."

The Lincoln American Legion program has been in existence since before World War II. And despite ever evolving challenges, Lincoln still has senior and junior teams.

“This year in particular what was so difficult was Legion baseball has very strict rules on when you can play and practice,” said Jason O’Brien, Lincoln’s past coach and current director of operations. “Because you’re only allowed to practice and play when high school baseball is over, we had to prepare for a season based on when the high school season would be over and that changed a half dozen times. Every time they made a change, we had to make a change.”

After not playing in 2020 because of the pandemic, Lincoln had a limited schedule this summer with hopes of returning to a full slate in 2022. The post will play approximately 25 games with its senior and junior teams combined.

Decatur's American Legion Post 105 team, Decatur Pride, lost the 2020 season to the COVID pandemic and did not field a team in 2021 due to several circumstances, Legion board member Sean Martin said. For Martin, Maroa-Forsyth's baseball coach, the IHSA's decision to move the baseball season into June put the American Legion season on uncertain footing.

"We were a little bit in limbo about when the high school season was going to end. You've got to make plans for Legion in the early fall before so we just really didn't have enough traction to know what was going to happen high school-wise," Martin said. "Legion starts about the first weekend of June/last weekend of May, so we weren't sure on the timing and that handcuffed us this year."

As recently as a few years ago, the team had strong participation numbers but as national numbers have fallen, so to has interested kids and coaches.

"When we started this, we had three teams and we had cuts and tryouts. There was a lot of interest but it just kind of dwindled from there," Martin said. "There was a lot of other Legion programs that were folding due to numbers issues. It wasn't just Macon County, it was Legion in general. I'm on the board but I'm not involved coaching-wise and it is getting harder and harder to find anybody to coach. That is another factor too, you have to have people to volunteer to coach and if you don't have that, you aren't going to have a team."

As American Legion baseball has dwindled across Illinois and the nation, the Shelby County program continues to be shining star of popularity in Central Illinois.

Part of the program's success — it has a prep (8th grade and 9th grade), junior (17 and under) and senior team — is its broad reach across many different communities.

"For kids that do Legion, there is a community angle. They are local kids that my kids are already playing from other communities that we see during the year," Forlines said. "I think they find it to be a lot of fun because they see each other during the school year. We have kids from Strasburg, Okaw Valley, Shelbyville, Sullivan and Pana.

"They are kind of all over the place and they get to razz each other and have a little fun. There are bragging rights during the regular season but then they get to come together and have fun."

Part of the wide net that Shelby County has is that if an interested player doesn't have a local team in their town, they are eligible to play at the next closest one.

"They are attempting to get everyone involved and they let you keep going until you find a place," Forlines said. "I know when you look at nation-wide, the numbers are down but just locally, the Shelby County team has always had good numbers."

Though Lincoln does lose players to youth baseball programs in larger cities like Springfield, Bloomington and Peoria, it can also pull players from other areas. While Lincoln’s roster has typically been 75 percent homegrown, the post could draw players from as far west as Havana, as far north as Heyworth and as far south as Springfield because there are not other Legion teams in that footprint.

There is a selling point for the legion programs that have survived — they're a cheaper option to travel teams.

Forlines, who was head coach of Shelbyville's football program from 2006-07 to 2010-11 and is Okaw Valley Middle School principal, see the American Legion game as a budget-friendly option for families.

"We spend $150 bucks and that is mainly uniform fees and paying for umpires. I know it is well over $10,000 for a summer (travel baseball) team for some people. In travel ball, you are spending much more over the summer with hotels because they are playing weekend tournaments. We get to play good baseball without breaking the bank," he said. "You are getting sponsored by the Legion, former veterans who are sponsoring the team, so it is a heck of a lot cheaper."

According to O’Brien, the Lincoln legion program, whose head coach is Chris Gober, offers decidedly less expensive summer baseball than other travel teams.

“It might be a tenth of the cost,” he said. “This season we charged $200 a kid. It might be thousands of dollars for travel teams.”

"We are willing to say, this kid wants to play second base for his high school team next year. He's not really ready to play there yet, but we are going to put him there tonight and we are going to let him get his feet wet," he said." He might make some errors but over the course of the summer, he is going to get better at it. You can't always do that when you go to a tournament and you want to win at all costs."

Ryan Karbach began playing for the Shelby County team at the prep level and now plays shortstop and pitcher for the junior team. Karbach, who is going to be a sophomore at Pana High School in the fall, feels he has improved his game through Legion baseball.

"If you play, you are definitely going to build you skills. You are going to have some fun and you will get better as you play," Karbach said. "I was able to start for my high school team as a freshman. I've been doing pretty good, pitching a little and making plays out in the field."

Karbach intends to continue playing as long as he can and enjoys the camaraderie he feels with his teammates.

"I have had a great experience playing with them. These guys really like baseball and like to come and play some good ball," he said. "I'll play as long as I can, until I'm 18 and I would like to play in college."

As long as they play

Martin hasn't ruled out a return for the Decatur Pride in 2022, but a long term fix to the problem is complicated.

"I hope it does return next year but I can't guarantee that it will. I'm sure we will have a (Legion board) meeting before too long," he said. "I'm not sure what the fix is. I've talked with coaches in other states and they kind of say the same thing: Travel baseball has taken over.  There are a lot of variables and there are a lot of travel teams and more elite teams. Those kids are going that direction instead of playing Legion baseball.

The key is opportunity, Forlines said. Travel ball isn't necessarily for every player, but that shouldn't keep them from the experience of being on a team.

"For me, I've coached a lot of sports and extracurriculars teach you all these lessons that you can't get in a classroom," Forlines said. "Learning teamwork. Learning how to be a leader and learning how to sacrifice and give yourself up for somebody else."

Arnold, who will continue to coach the 16U Decatur Commodores team, becomes just the fourth Mount Zion baseball coach since the program began in 1969-70.

DECATUR — When Millikin athletic director Dr. Craig White was playing in the NFL with the Buffalo Bills in the 1980s, he didn't have to naviga…

Arthur-Lovington-Atwood-Hammond softball defeated Ottawa Marquette on Monday to advance to the Class 1A State Tournament for the first time in program history.

Mount Pulaski baseball shuts out St. Teresa 3-1 to win the Class 1A regional championship on Monday.

St. Teresa baseball jumped out to a big lead on LSA in Friday's Class 1A regional semifinal at Sunnyside Park but the Lions never quit and battled to within one run, before running out of time and losing 8-7. 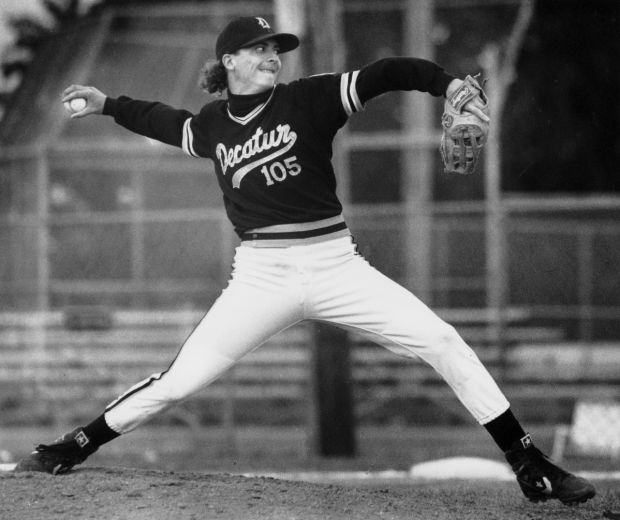 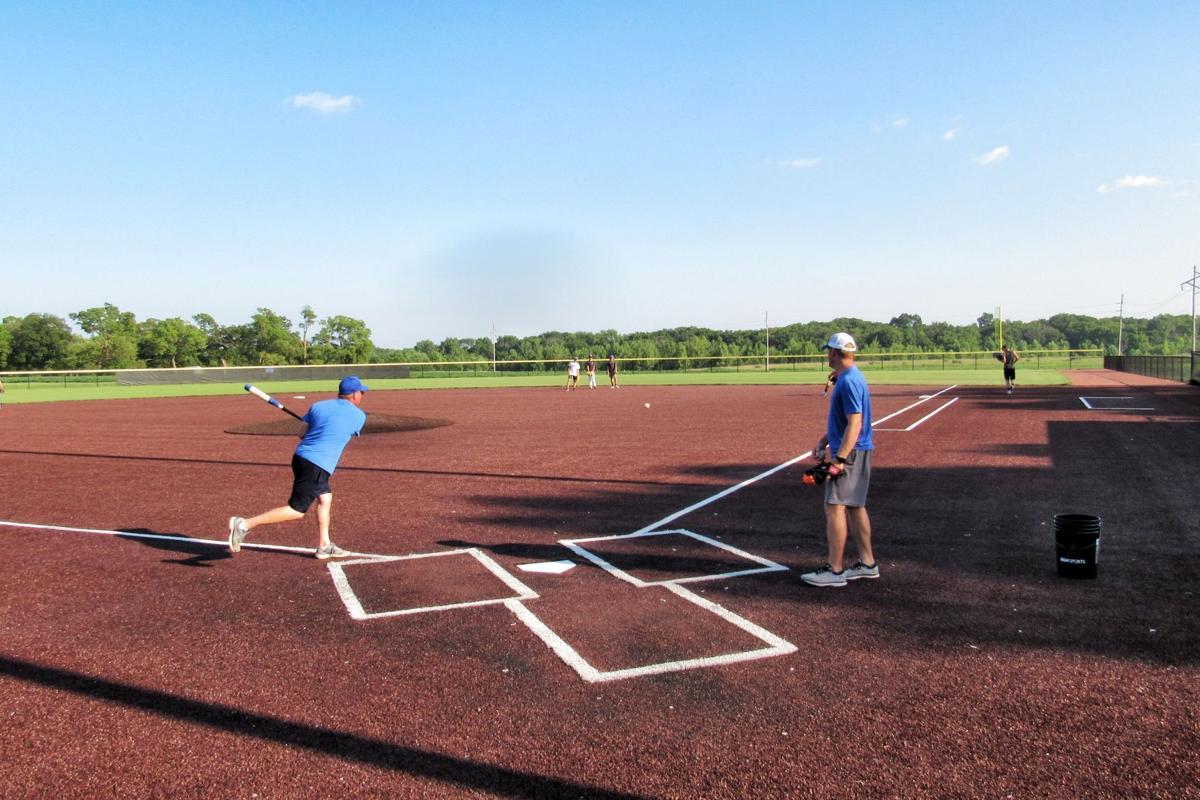 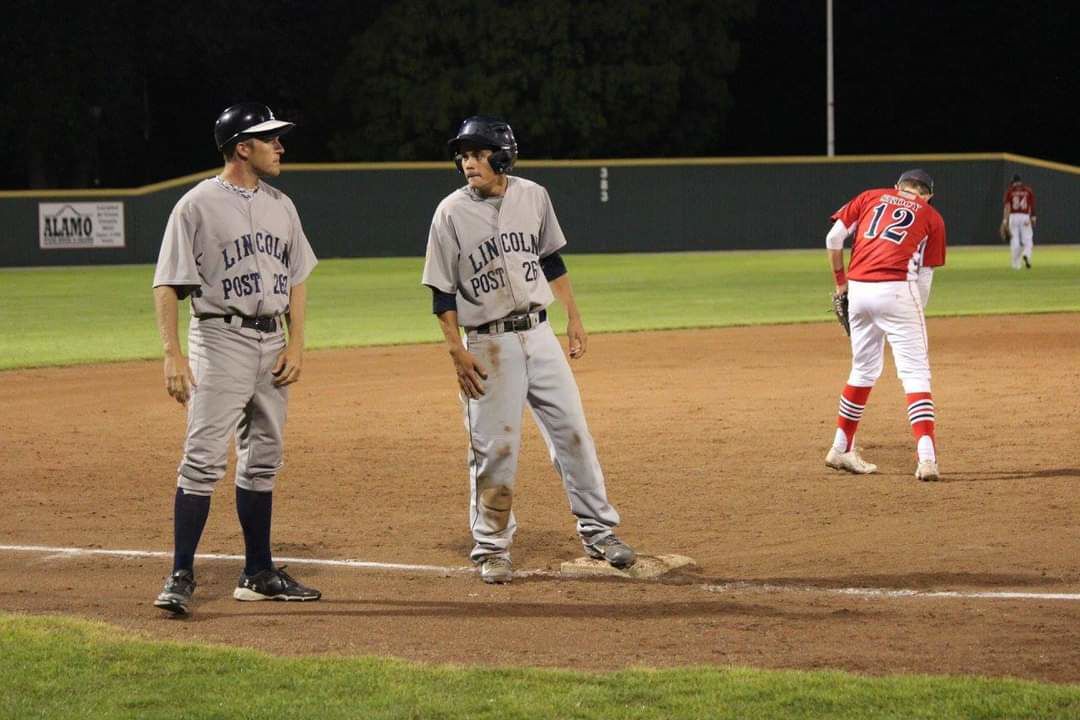 Former Lincoln star Ryan Schulz stands at third base with former Lincoln coach Jason O’Brien in 2017. Lincoln is one of the few area communities that still has an American Legion baseball team. 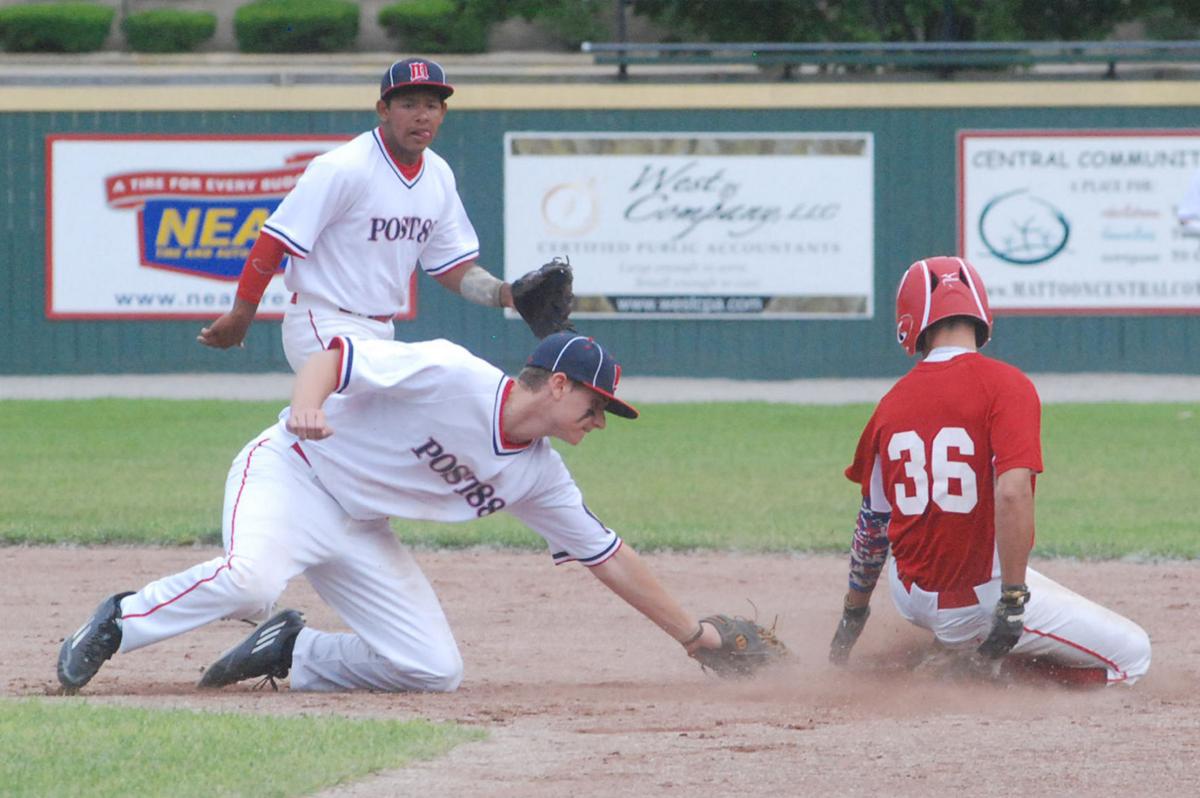 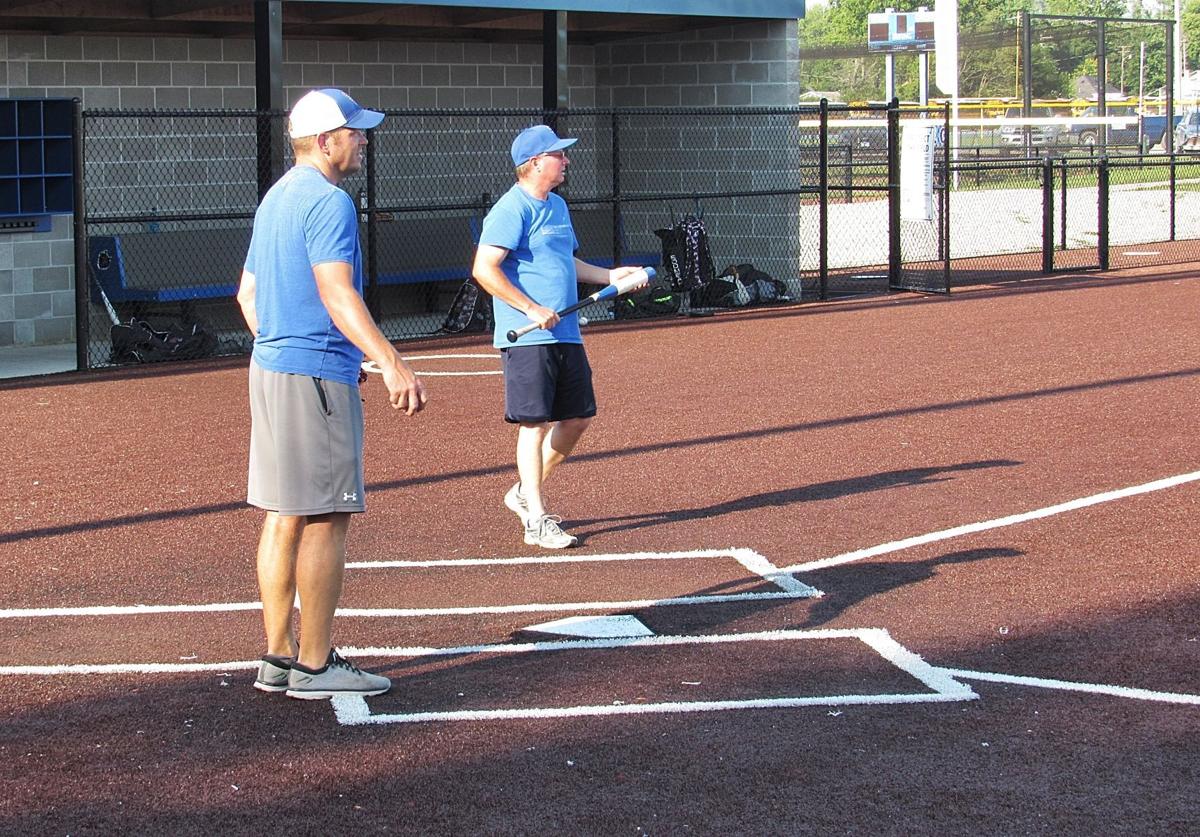 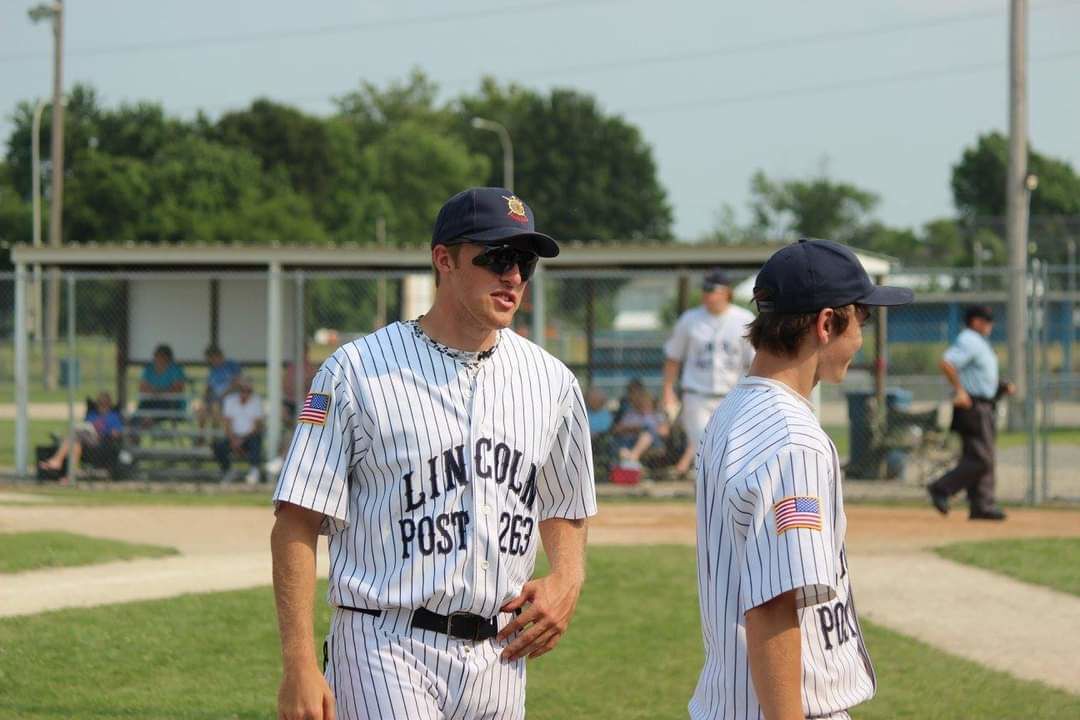 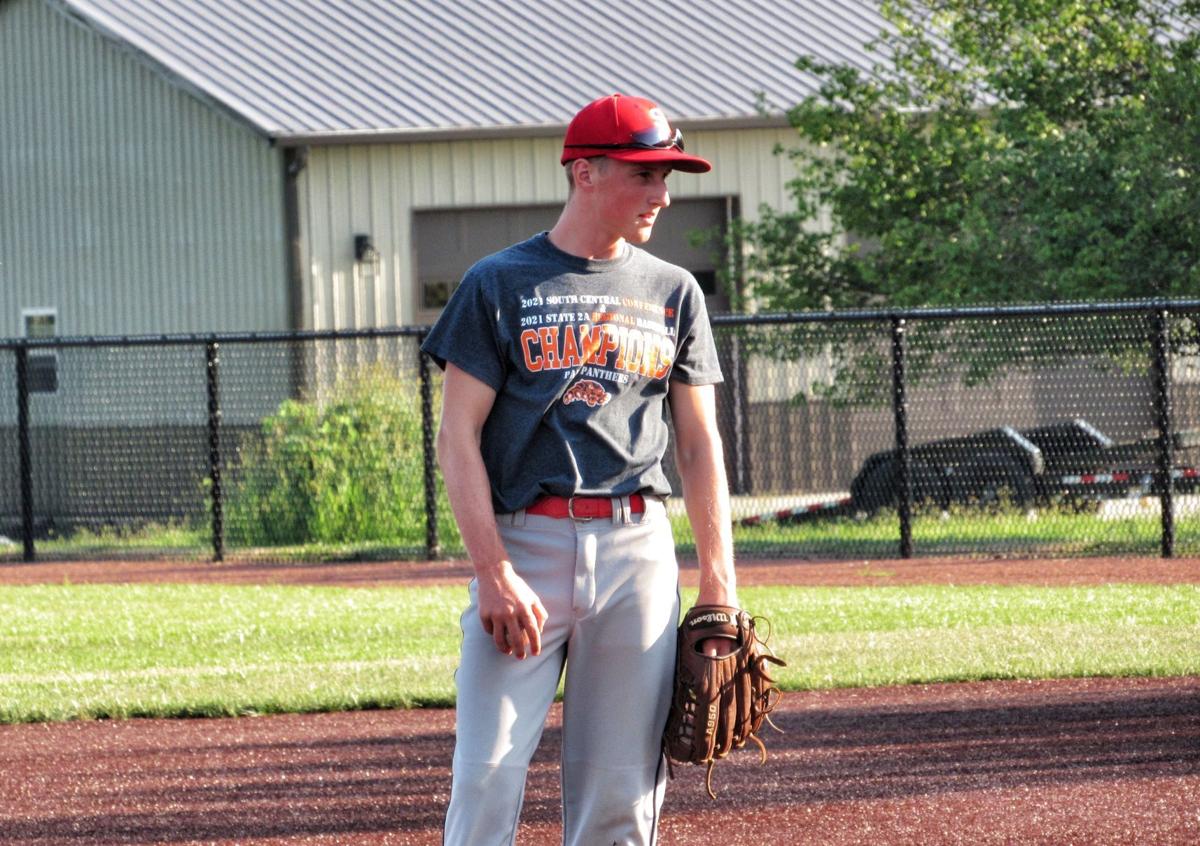 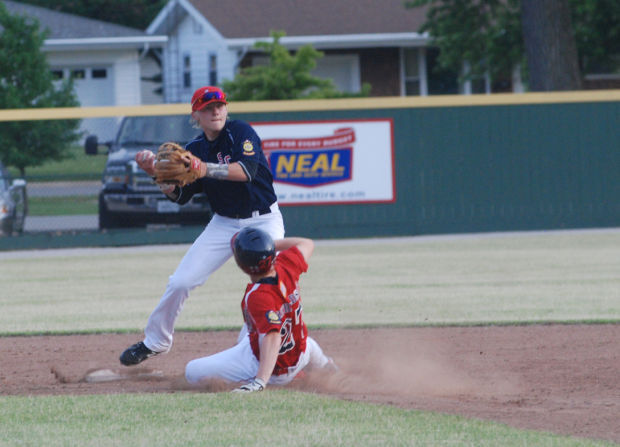 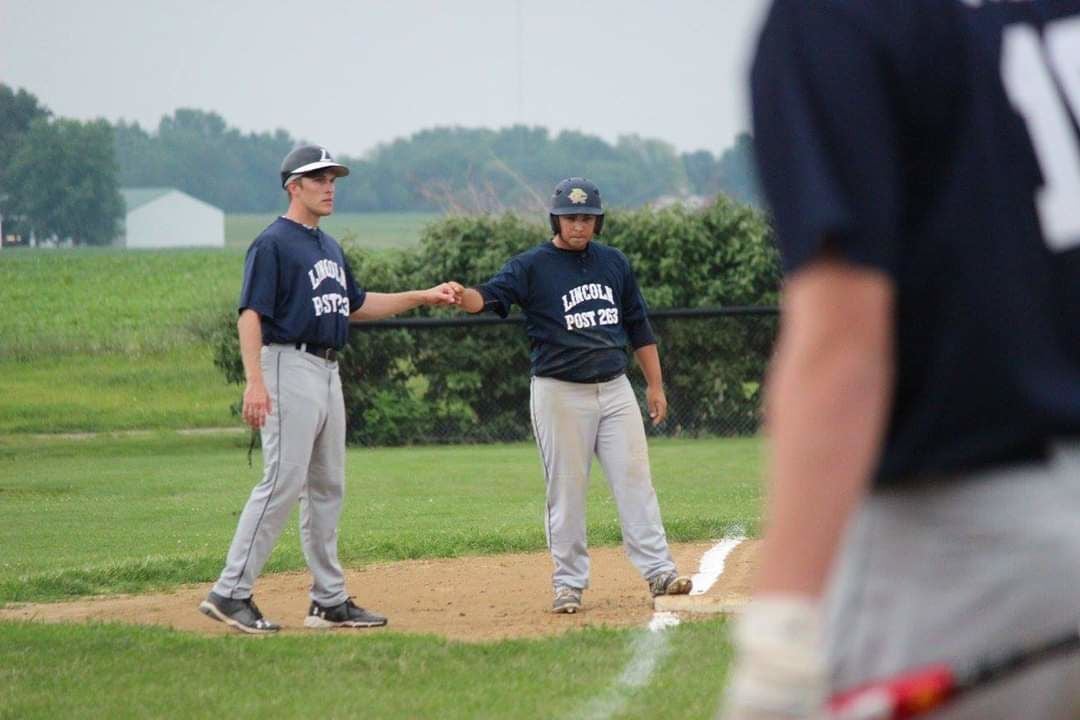 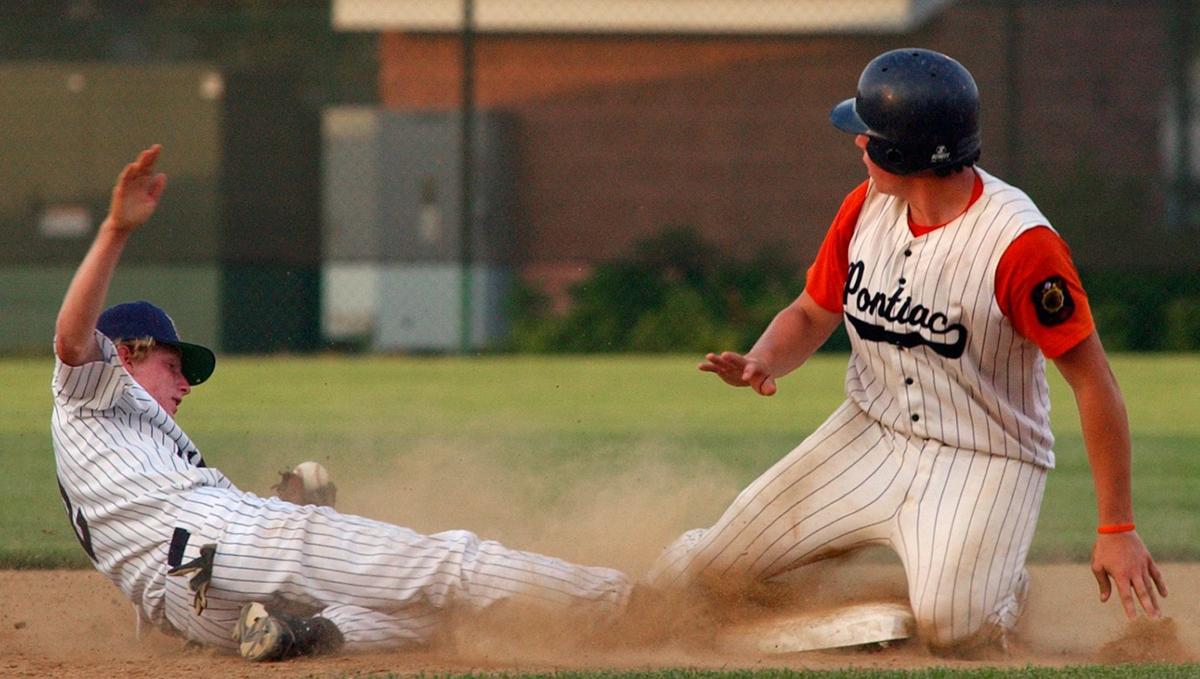 Lincoln's Gary Rodemaker hangs on to the ball as Pontiac's Zach Benning attempted to steal second base in the third inning of the American Legion Baseball at Jack Horenberger Field in Bloomington in 2005. 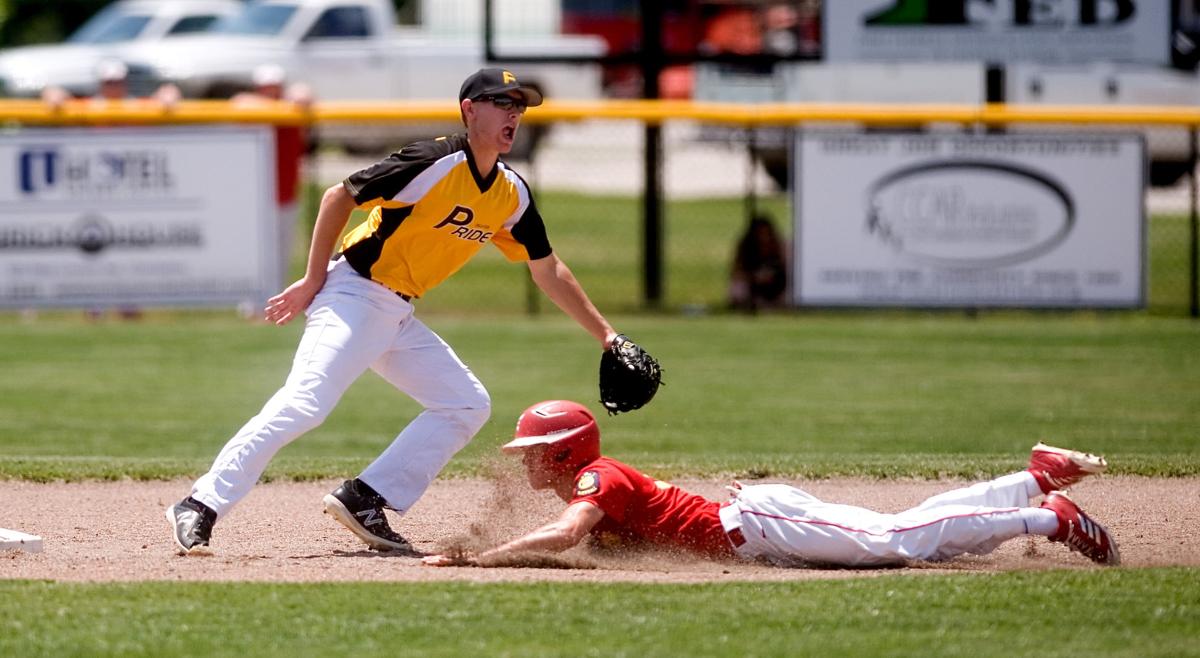 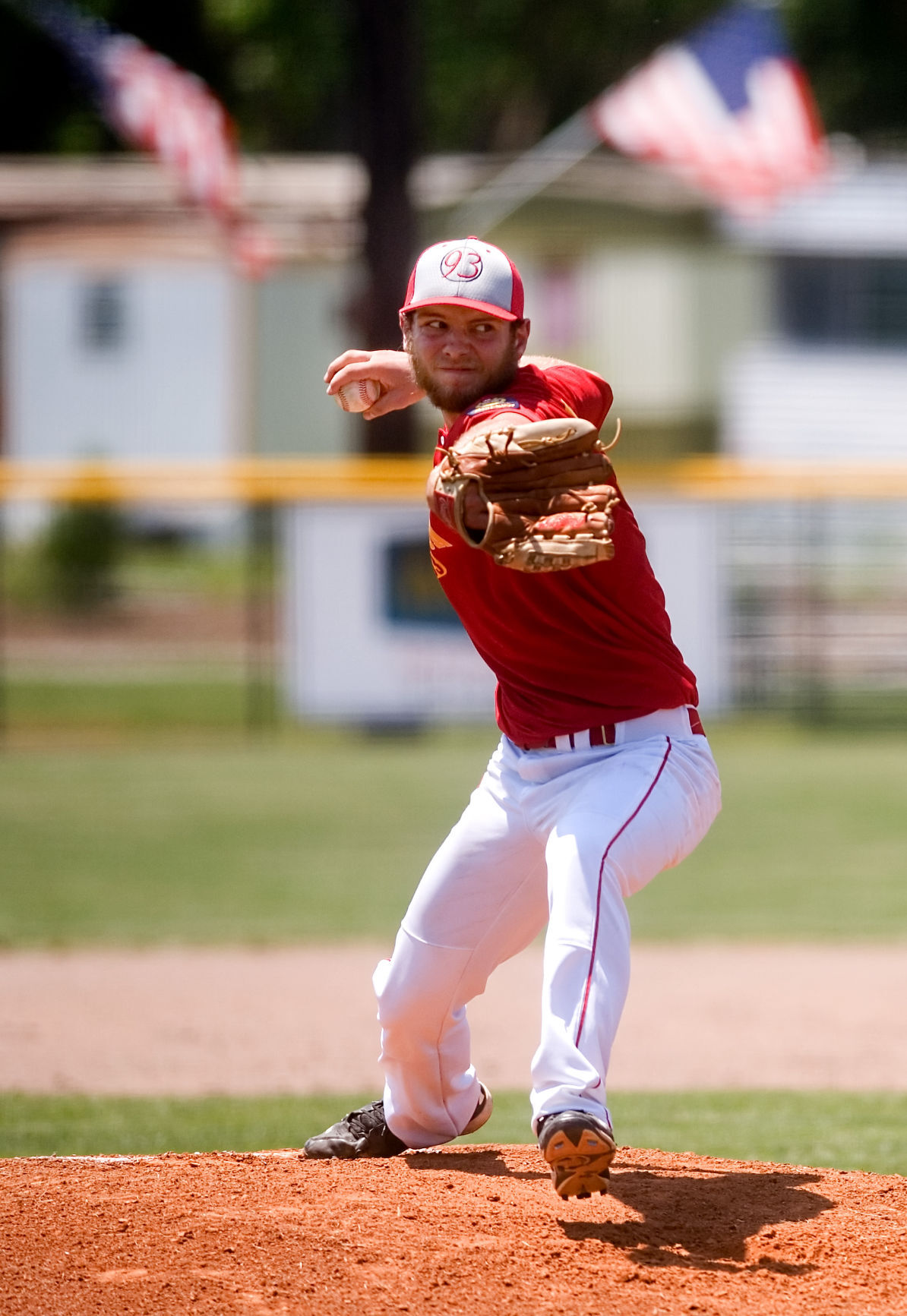 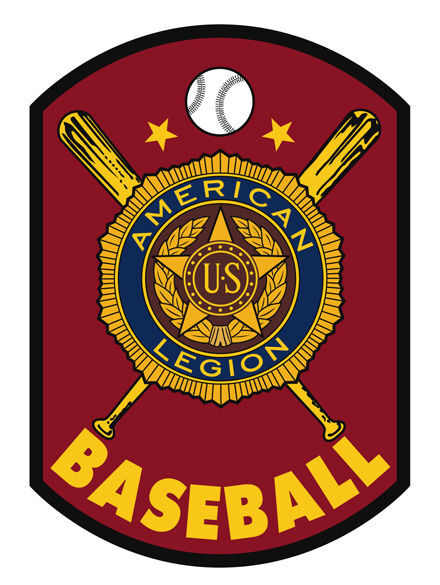 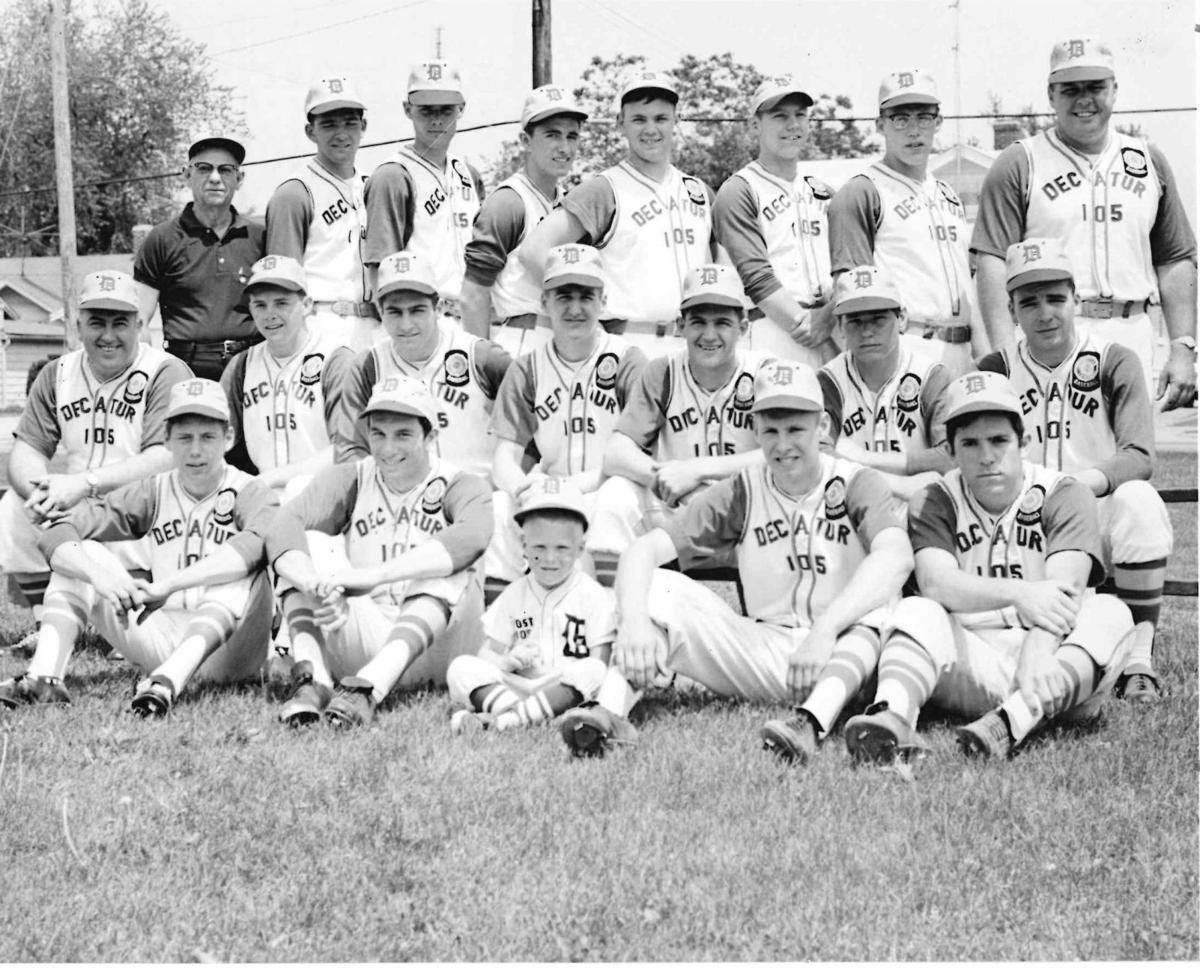 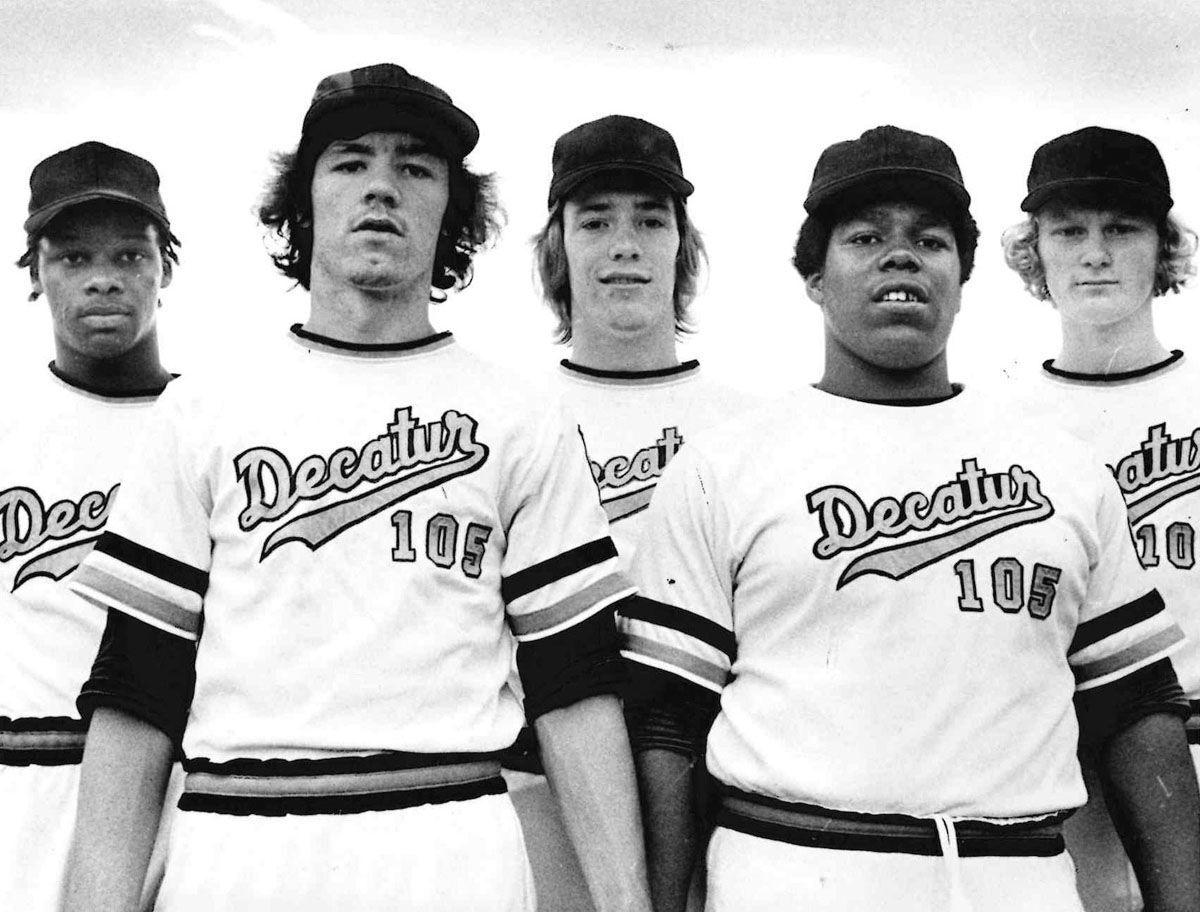