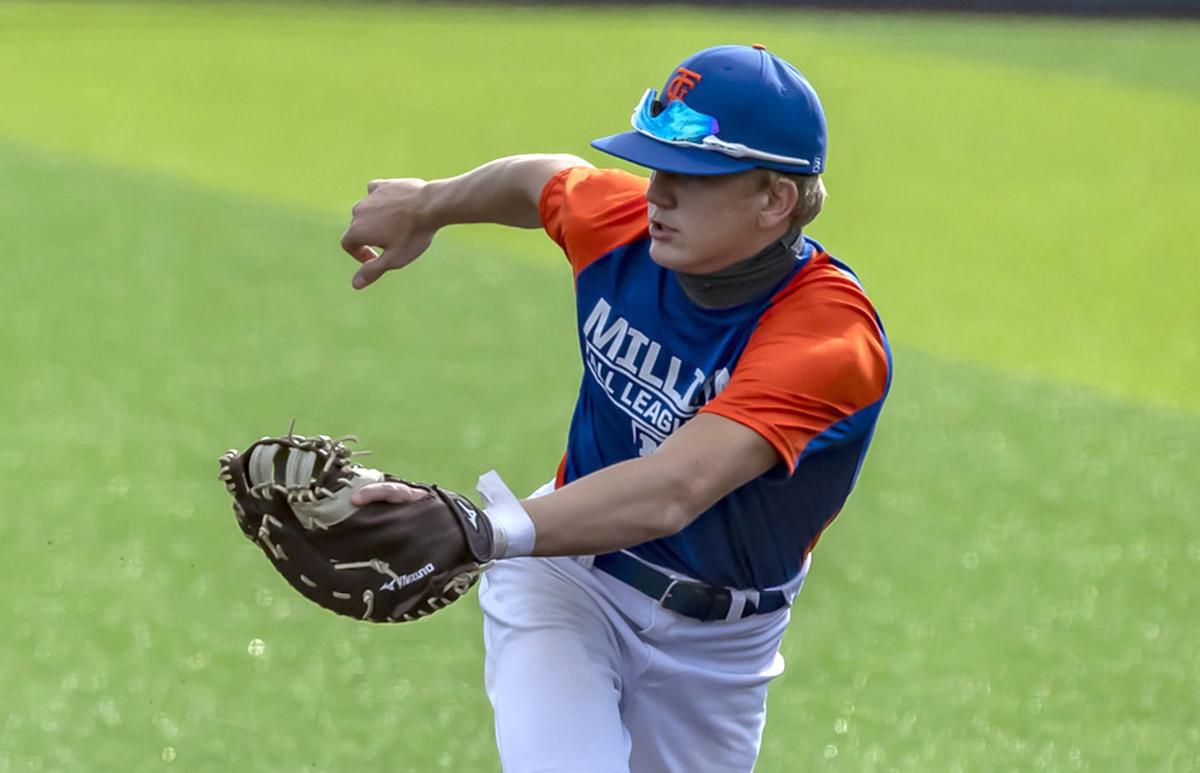 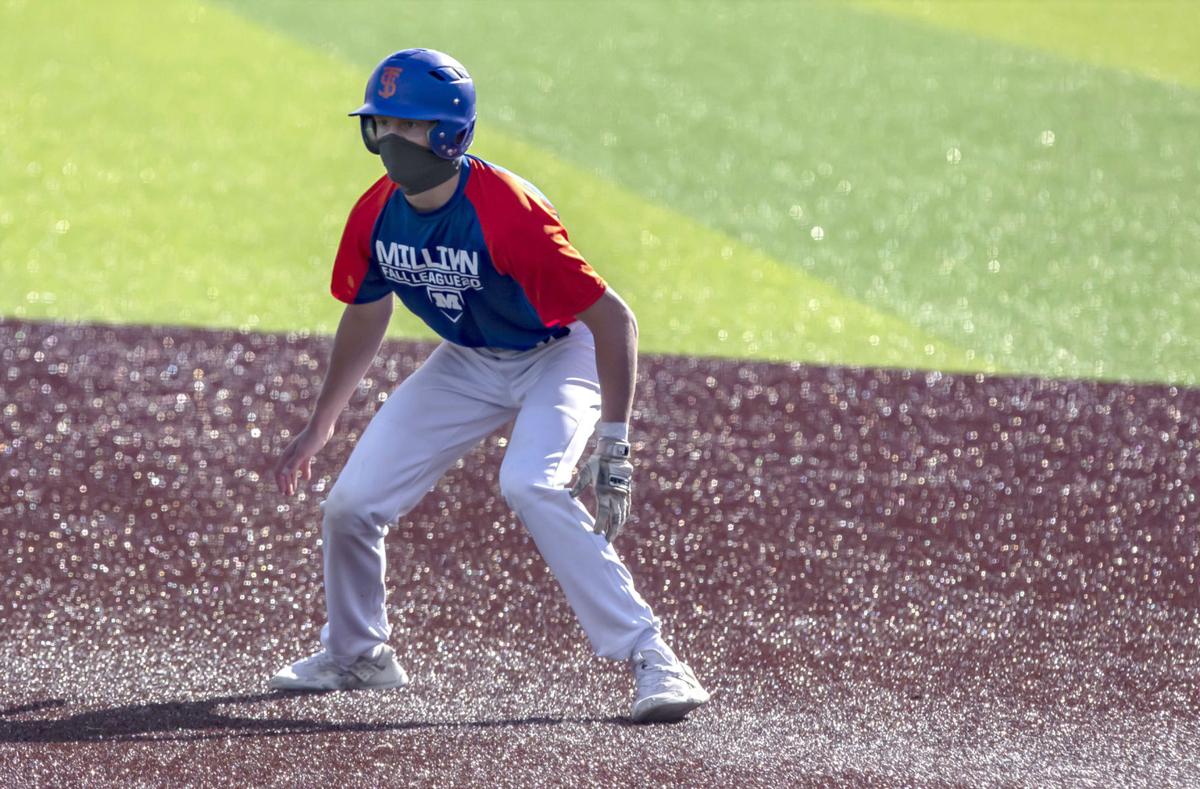 St. Teresa senior Chord Miller should be beginning his high school football season in a normal world, but instead is playing for the Millikin Fall baseball League. 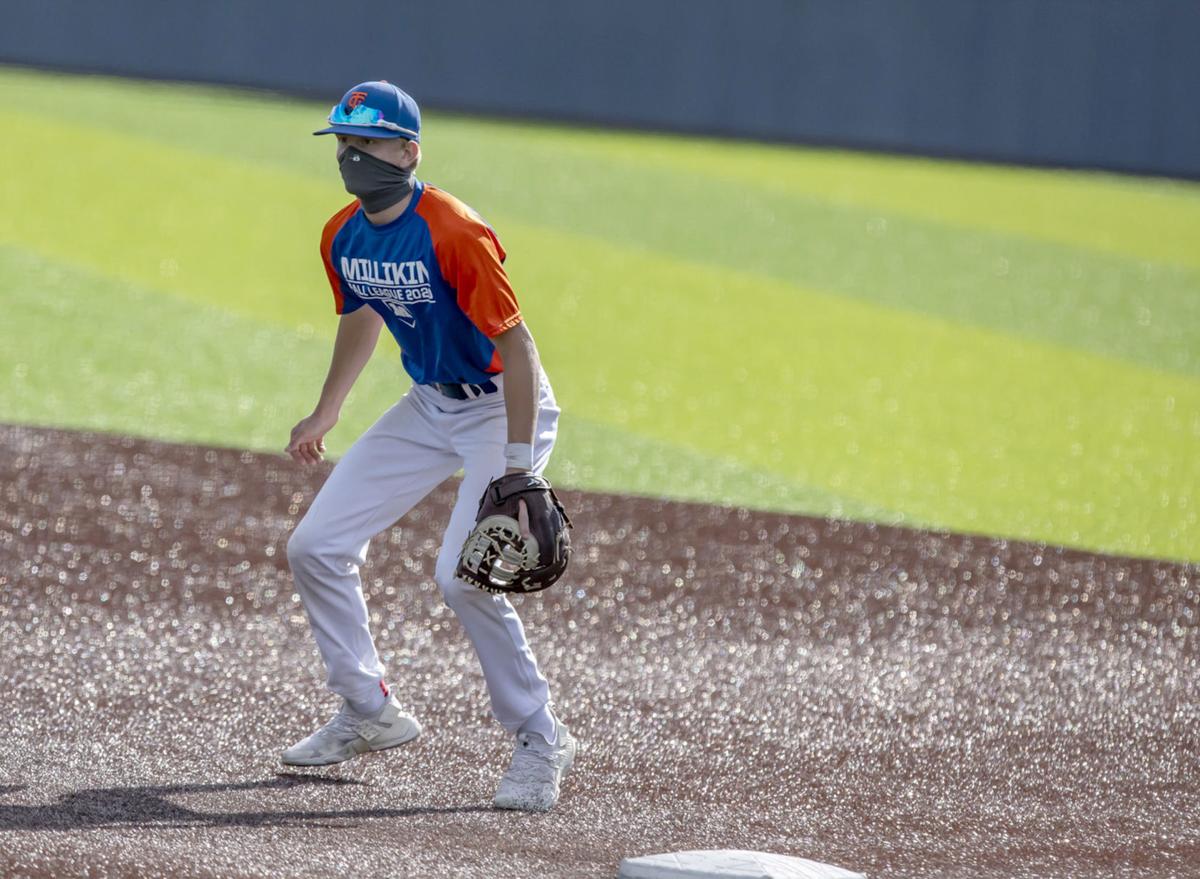 Chord Miller plays first base during the first weekend of the Millikin Fall Baseball League.

DECATUR — Just near 4 p.m. on Sunday, Chord Miller emerged from the dugout at Workman Family Baseball Field on the campus of Millikin University with white baseball pants, a blue shirt with orange sleeves and a blue batting helmet.

He was the No. 8 batter for Team Royal, made up of primarily St. Teresa students, in the new Millikin Baseball Fall League. Miller, a senior for the Bulldogs, worked a walk in his first at-bat and was hit by a pitch in his second before stealing second and third bases.

Not a bad debut. But in a normal, non-COVID impacted world, Miller likely wouldn't have been there. He was supposed to run onto the field two days prior, on Friday night, to begin his season as the starting quarterback for the Bulldogs. That would have taken all of his energy and attention.

"It’s my senior year, just focus on being the quarterback and do big things," Miller said.

Miller started at quarterback during the regular season last year in place of injured starter Jack Hogan and threw for 961 yards and 11 touchdowns while running for 361 more yards and a score. To boot, he added 31 tackles and four interceptions as a defensive back. With the graduation of Hogan, who returned for the postseason run to the state semifinals, this fall was supposed to be Miller's time as the quarterback.

That, though, must wait until the spring after the Illinois High School Association pushed football into March as a part of a revamped schedule.

"I thought he stepped in and really did a nice job of running the offense," St. Teresa football coach Mark Ramsey said. "Even though he's not a great big guy, I do think he's a threat, a running threat, all the time. He's pretty fast and he's got the ability to make people miss in the open field."

Instead, Miller is playing on Sundays at Millikin after having his junior baseball season canceled as a result of the novel coronavirus. It's a different schedule than what he's grown accustomed to as a high school and the baseball itself is a bit different. There are 14 batters — the size of the team — in a lineup rather than the traditional nine in order to ensure at bats for everyone. Mask wearing when within six feet of any other player: First base and batter's box, for example, is required. Count Miller in on the adjustments.

“Whatever sport comes at me, I’ve just got to play it," he said.

The last sport he played for St. Teresa was during basketball season and hasn't had the competitive feel of a game since a student-run 3-on-3 tournament at a private home during the shutdown. Returning to a competitive game is a welcomed feeling for Miller, who ran through the gamut of emotions on Friday night.

Rather than opening the season at home against Downs Tri-Valley, in what has been a quality season-opener in recent years, he was at his house watching other high school football teams play on ESPN. He and the rest of his St. Teresa teammates, are trying to stay in shape for the spring season, where the team has high aspirations. Though a group text message on Friday still reminded them that their typical fall season wasn't happening.

“We were just mind blown that we weren’t able to play. It’s just sad," Miller said.

Ramsey hasn't much talked to Miller about the fall league, but wasn't surprised to hear that he's playing. Miller is a fierce competitor, even if he carries himself with a calm, quiet demeanor. Like other athletes, his schedule has been upended. Typically he goes from football to basketball to baseball, follows that up with summer football camps and the cycle repeats.

It's a typical cycle for three-sport athletes; a non-stop run of competition. Without that, there's a void.

"Shoot, you look at it, some of those kids need to get out there and they've got to fill those competitive juices," Ramsey said. "It doesn't surprise me that he would want to get out and play. You look at kids who have gone from football to basketball to baseball and all the summer stuff and do it again ...

"For this to happen, and again everybody is in the same boat, but you get attached to your kids and you feel for your kids; the (Austin) Fitzpatricks, Jackson Arnolds, the Zeke Lewises and the kids who are seniors and the uncertainty of it all. I'm anxious to see them."

'It's a win-win,' Millikin Fall Baseball League will give high school players competition

Brandon Townsend has long considered the idea of running a fall baseball league for high school players. He's seen it done in communities like Peoria and Bloomington but it hadn't made it's way to Decatur — until now.

Ethan Willoughby fielded offers from Southeast Missouri State, Ball State and Illinois State, but it was the personal connection with ISU that made Willoughby choose the Redbirds.

Watch now: Decatur Commodores are building on the success they've had

DECATUR — It felt like everyone wanted to be a Decatur Commodore on Wednesday.

The Mount Zion school district in a social media post Tuesday said a student who was at the high school last week has tested posted for COVID-19.

Jennifer McCormick, an Arthur grad, who is entering her fifth season at Illinois College as the coach of women's basketball goes through the ups and downs of the team during the pandemic.

For the second consecutive year, Millikin was ranked among the top 50 in the category at No. 40 of 372 schools.

Saturdays in the fall are typically for recovering from a tough night on the field for Brayden Closs as a linebacker on Warrensburg's football team. This year, he's on on the pitching rubber instead.

St. Teresa senior Chord Miller should be beginning his high school football season in a normal world, but instead is playing for the Millikin Fall baseball League.

Chord Miller plays first base during the first weekend of the Millikin Fall Baseball League.