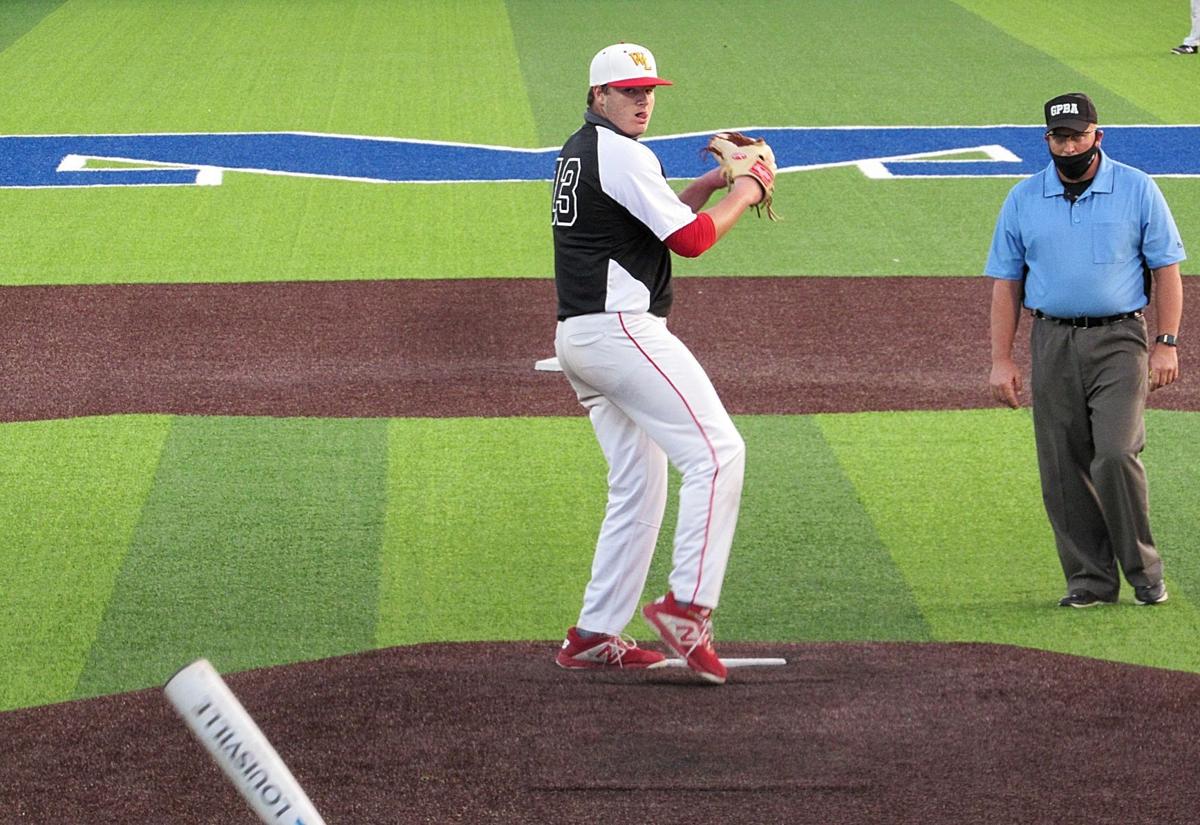 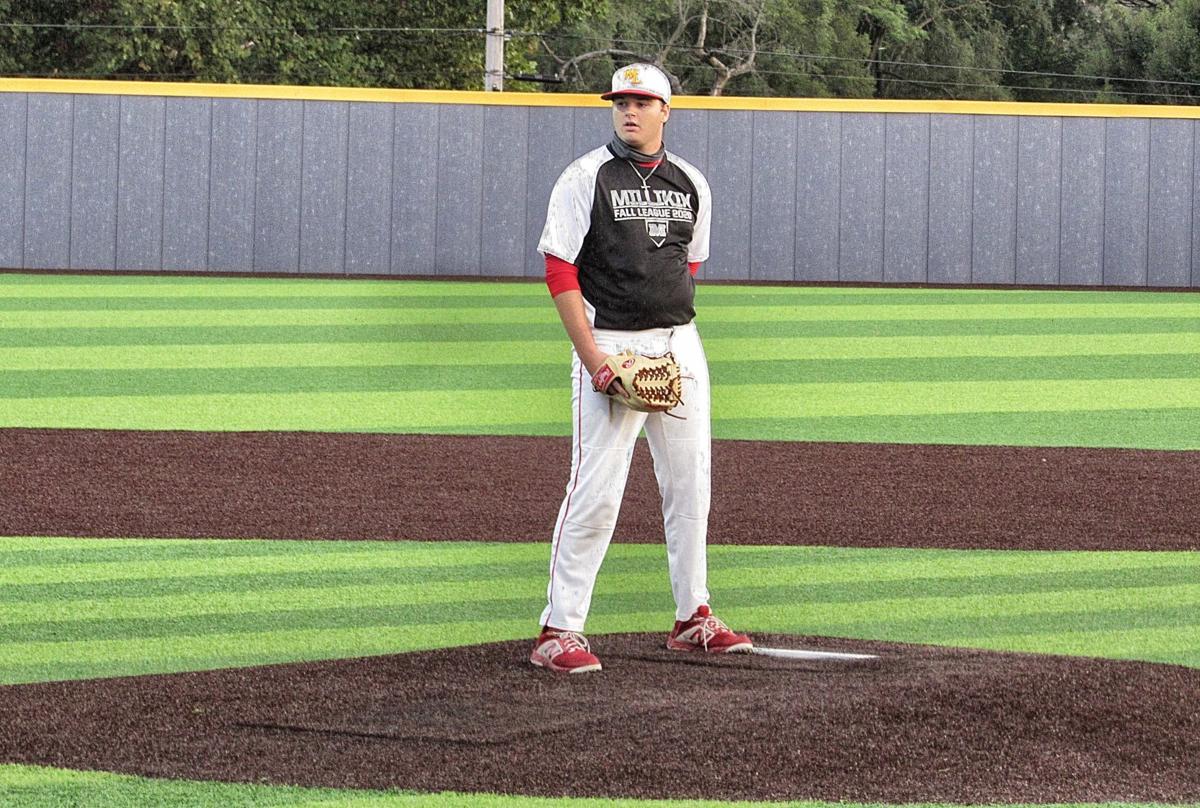 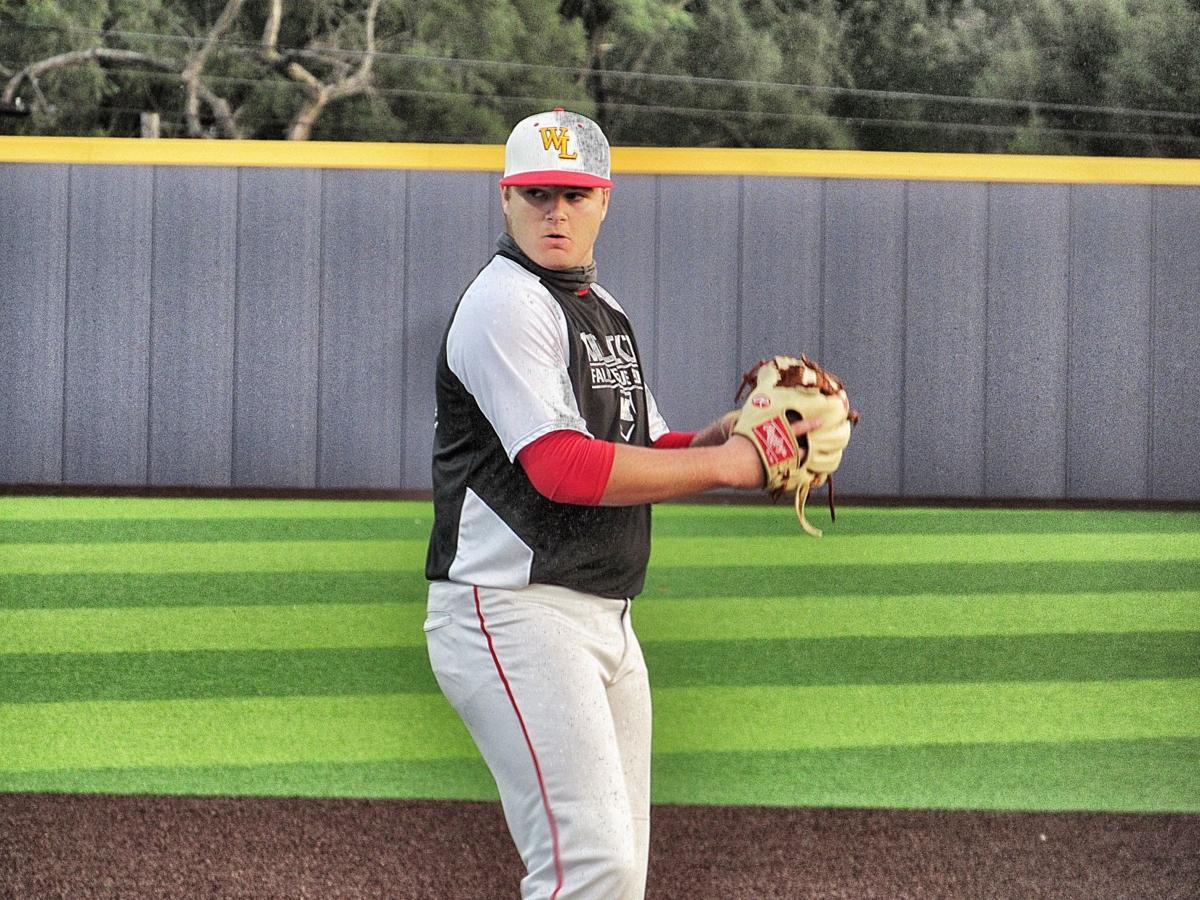 Warrensburg-Latham's Brayden Closs throws in the Millikin Fall Baseball League. Closs will pitch for the Decatur Commodores next season. 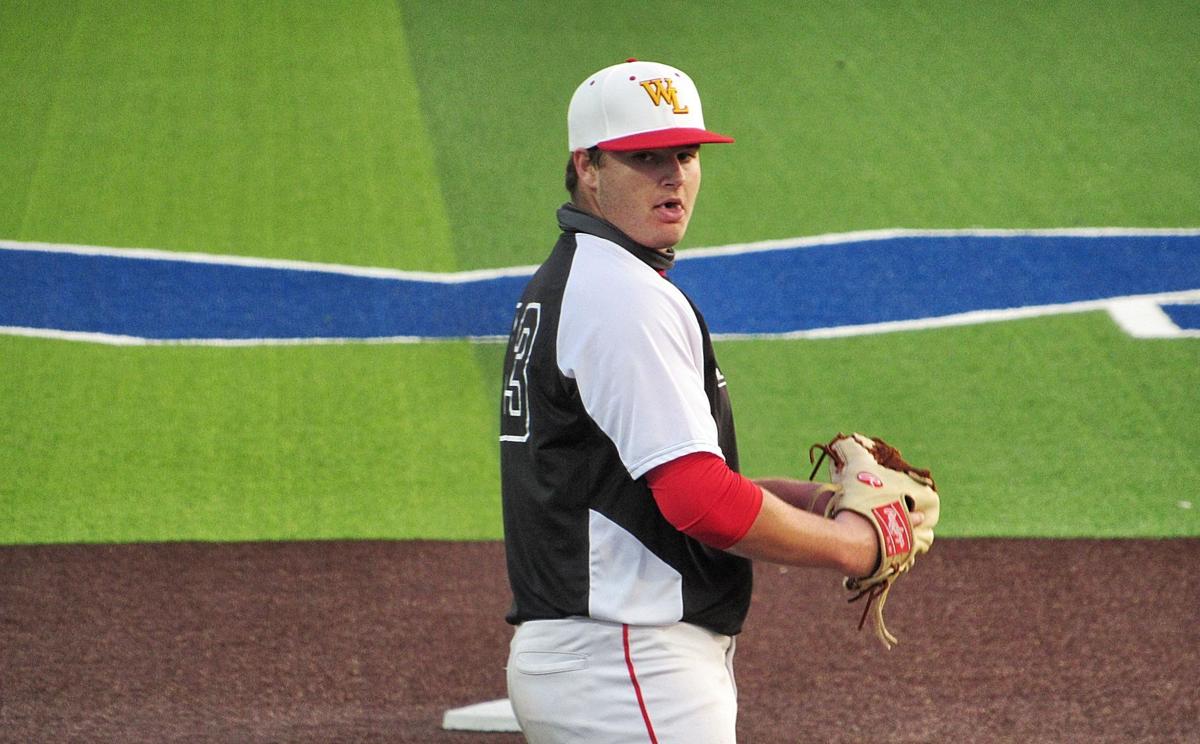 Warrensburg-Latham's Brayden Closs would typically be playing football for the Cardinals but with it being delayed to the spring, the left hand pitcher is throwing in the Millikin Fall Baseball League.

DECATUR — Saturdays in the fall are typically for recovering from a tough night on the field for Brayden Closs as a linebacker on Warrensburg-Latham's football team.

This year, the Cardinals senior is instead on the pitching rubber at Workman Family Baseball Field, striking out batters and growing his reputation as a dominating left-handed pitcher on Team Black in the Millikin Fall Baseball League.

"It has been different and we are finally going to get to start our (football) contact days here pretty soon and it is going to be fun to get to see those guys again," Closs said. "Football is very routine oriented with our schedule it is the same every year and the days are set up the same. It's always Fridays with football and you are always preparing for that Friday and it is weird to not have that."

Closs is a tall and imposing presence on the mound at 6-2 and 210 pounds, but in his underclassman years, physical intimidation wasn't a part of his game.

"My size and strength were really underdeveloped my freshman and sophomore year and then I spent a lot of time in the weight room and got stronger and gained body control and it helped my velocity jump and my control improved," Closs said.

According to Prep Baseball Report, Closs is ranked as the 79th best prospect in Illinois in his class and is described as having a command of three-pitches, including a fastball that can reach the mid-80s and a curve in the mid-70s.

"I would say my fastball or my curveball are my best pitches," he said. "The velocity has really improved for me and my curveball ... I sort of just came up on it naturally. Some velocity comes along with it, and and a higher velocity you can get more spin on the curveball."

A physical comparisons to Clayton Kershaw is appropriate when seeing Closs on the mound, but he shrugs that off for a right-handed pitcher to model his pitching style after.

"I don't necessarily look at the hand and so I sort of model it after right-handed pitchers and just switch it to my side. I really like (Cincinnati Reds pitcher) Trevor Bauer and the unique arm path that he has," Closs said. "A lot of major league pictures go away from the curveball and stick to the slider but he is a guy that has a curveball in his arsenal as well as a slider. That is one thing I've tried to have both a curveball and a slider."

After losing his junior baseball season to the COVID-19 pandemic, Closs played for Champaign's Yard Goats summer team and will be on the Decatur Commodores next summer. He will face many of his future Commodore teammates in the fall league.

"It was tough to lose the spring season but I luckily had the opportunity to play in the summer, but it isn't the same as playing with your high school team when the games actually mean a lot more and there is pride for your school and playing with your friends," he said. "Playing on the Yard Goats was interesting because I don't know a lot of people from south of Champaign so I got to experience their side of baseball. Around here, it is Springfield or Decatur and I don't get over to Champaign that often.

"(I'm looking forward to facing pitcher) Brennyn Cutts from Cumberland. He's going to be on my summer team next year and I want to hit against him."

The fall league brings 14 teams into weekend competition and gives players the chance to face opponents they typically wouldn't get to see in IHSA competition.

"We are playing bigger schools out here and this fall league is bringing a lot more people from distance a lot more south like Effingham that we wouldn't get to play because they are a lot bigger than we are," Closs said. "We never get to play Mount Zion because they are too big and we get to match up and see where we stand against the bigger size schools."

Warrensburg-Latham High School is using remote learning this fall and so the baseball league has given Closs and his teammates a chance to see each other in person.

"The goal for the league is to get some at-bats and get some Innings pitched. We are using this as a practice and not necessarily going for the win. I have really enjoyed playing in the fall especially right now," Closs said. "The majority of my team are kids from Warrensburg and we don't get to go in-person so getting to be able to see these guys on a Saturday or Sunday when we have lost the social aspect at school is probably one of my favorite parts of school right now."

Warrensburg-Latham's Brayden Closs throws in the Millikin Fall Baseball League. Closs will pitch for the Decatur Commodores next season.

Warrensburg-Latham's Brayden Closs would typically be playing football for the Cardinals but with it being delayed to the spring, the left hand pitcher is throwing in the Millikin Fall Baseball League.