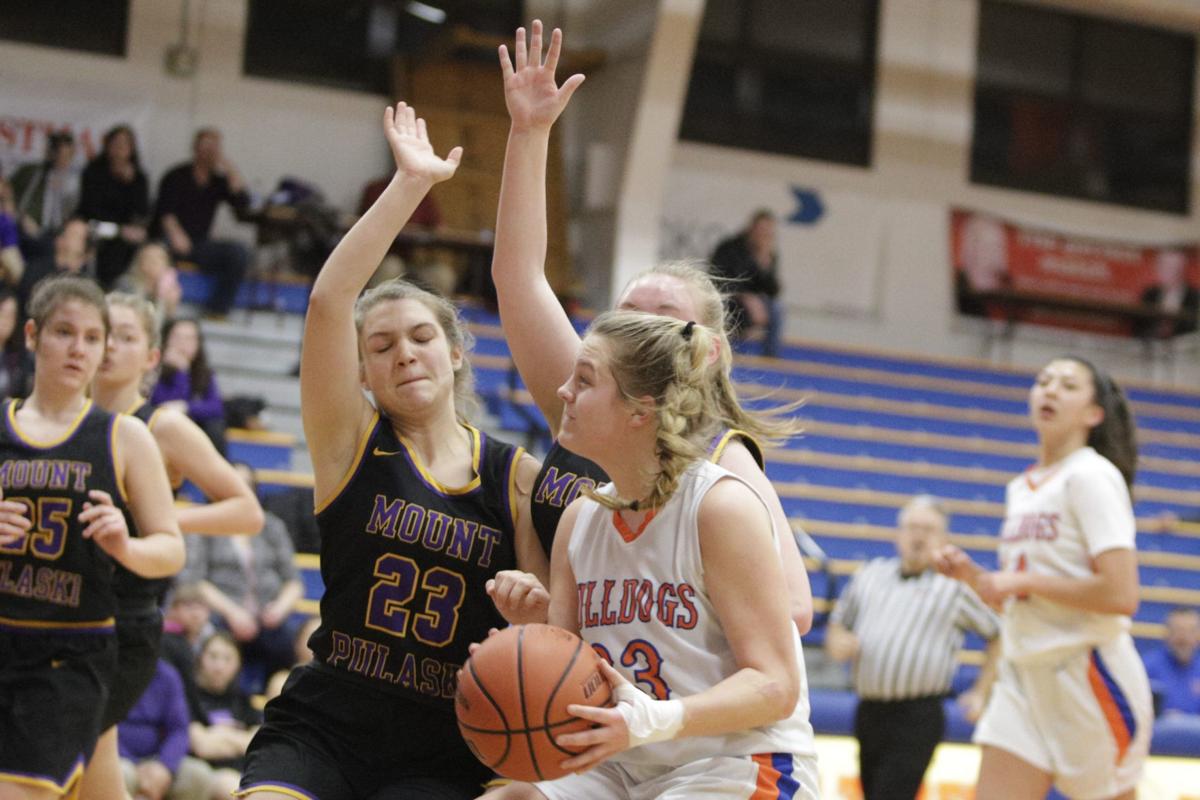 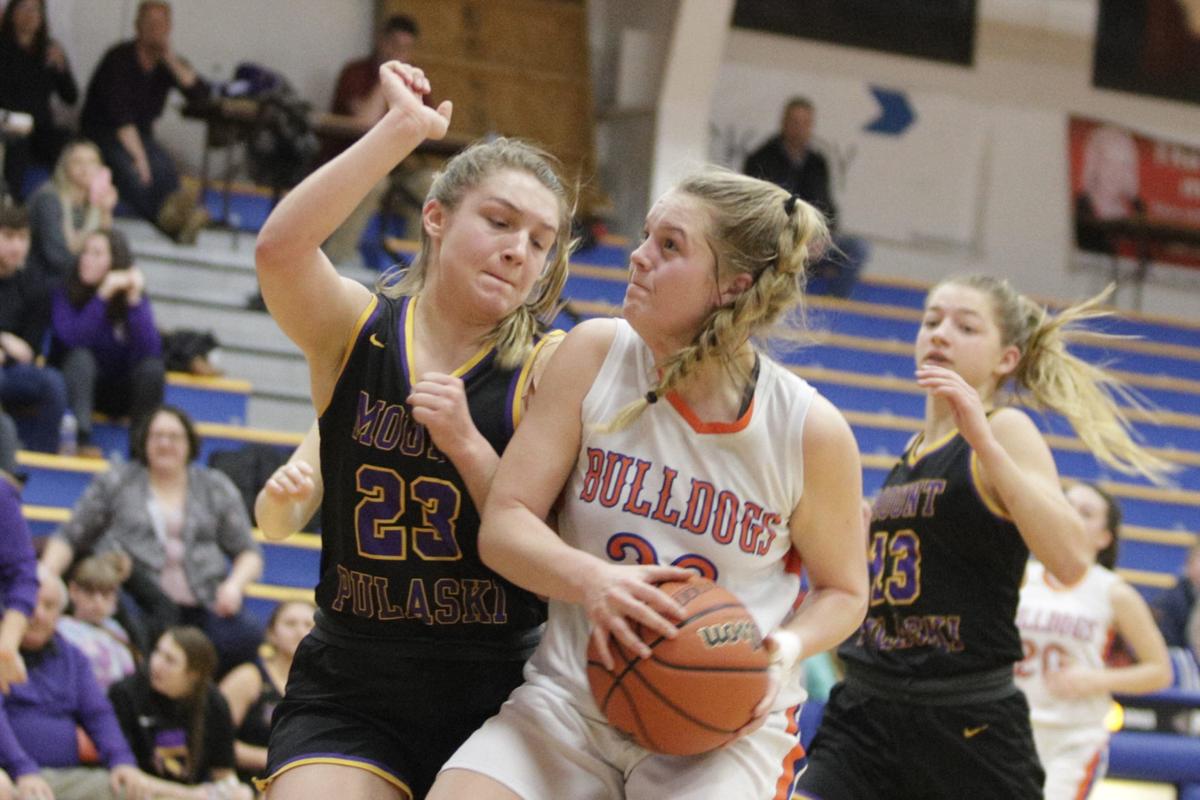 St. Teresa wins 70-34 against Mount Pulaski on Thursday for the Class 1A regional finals at St. Teresa High School. 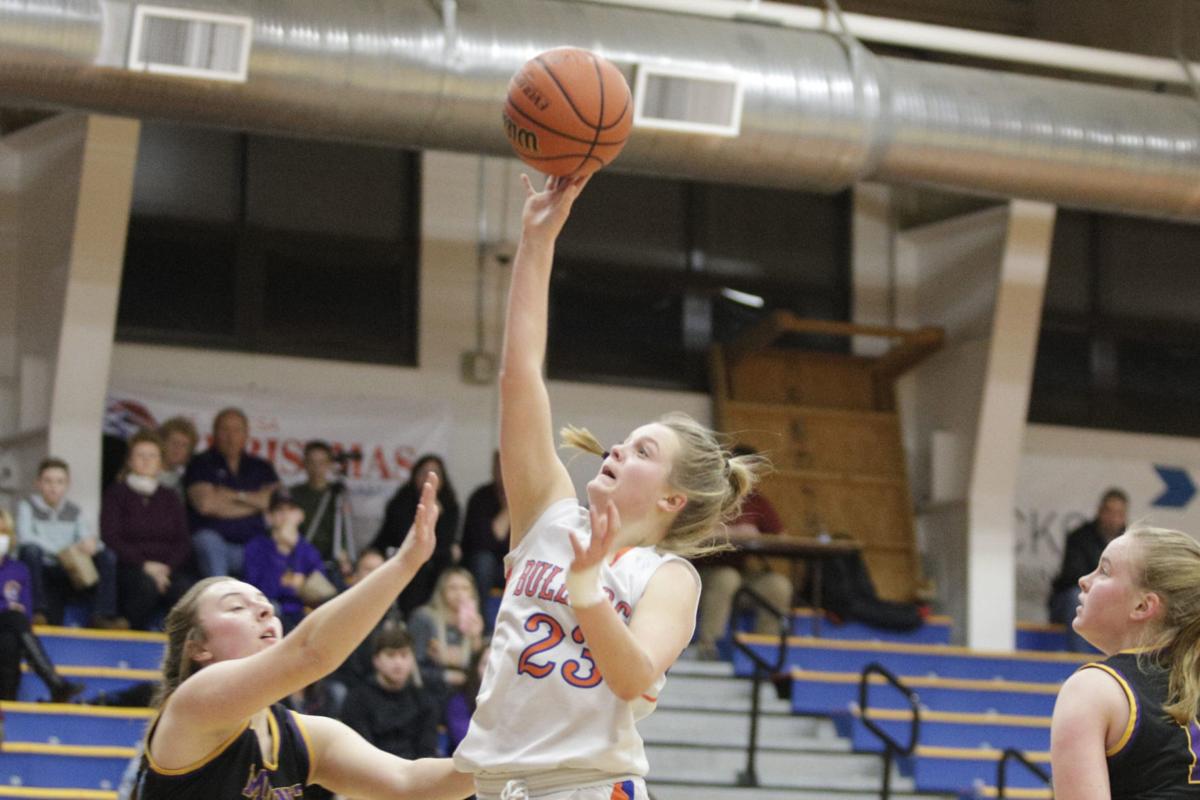 DECATUR — After photos with yet another regional championship, Addie Fyke posed for pictures with the plaque — her fourth in as many seasons on the St. Teresa girls basketball team. Her left hand that wrapped around the plaque was covered with white athletic tape and to her side was an athletic trainer waiting to give her ice to deal with some pesky hip flexor pain.

Not that any of that mattered for the near hour-and-a-half that preceded the photos. Fyke, a senior for St. Teresa, scored a career-high 25 points and was a key cog in a relentless Bulldog defense that forced 26 Mount Pulaski turnovers in a 70-34 win over the Hilltoppers on Thursday night in the Class 1A Decatur (St. Teresa) Regional championship game. It's the fourth straight regional title the Bulldogs (22-7) have won and did so without head coach Andrea Dorsey, who missed the game after recently giving birth to her child.

The Bulldogs will play Lexington at 6 p.m. Monday in the Class 1A Champaign (St. Thomas More) Sectional semifinals.

“That felt good," Fyke said of her new career-high. "I mean, it’s in a championship game. I’m glad I could help my team win."

Fyke drove the lane, hit layups, jump shots and pull-up jumpers. Early in the fourth quarter, she out-scored the entire Mount Pulaski team. On top of that, junior forward Addison Newbon added 21 points and 16 rebounds. Fyke entered the game with a certain bravado. She's been playing well recently, including scoring a team-high 17 points in a regional semifinal win against Farmer City Blue Ridge on Tuesday.

Newbon knows just how difficult it is to play with ligament damage in her thumb. She suffered a similar injury last season, but big games certainly help ease the pain, and Fyke delivered just that.

“She was hungry to score every single time," Newbon said. "I was like, I know she has it. She’s going. She’s going to get it in and that just is good for the team getting everybody going. She played great."

It wasn't all smooth-sailing for St. Teresa. Shots weren't falling early and Mount Pulaski wasn't exactly going away. The Hilltoppers were hitting shots and the Bulldogs hadn't quite settled into the defense. In fact, Newbon's layup as the buzzer sounded to end the first quarter tied the game. Fyke scored the first four points of the second quarter and St. Teresa had a 15-point lead at halftime.

The switch came on defense when the Bulldogs settled into their press and forced turnover after turnover. St. Teresa assistant coach Laura Zimmerman knows when the team wants to lock in, they can.

“It’s all about the energy that we bring to the press and to our defense," Zimmerman said. "When they’re playing hard, we make things happen."

Sadé Oladipupo was a catalyst on defense, jumping passing lanes and getting the Bulldogs on the run in the other direction. Collectively, the Hilltoppers struggled to break the press.

“Our press, I’d say," Fyke said. "We got a lot of steals, some and-ones and that’s when the game changed, really."

Said Newbon: “I think definitely basing it strongly on our defense and not what was going down on the offensive side. Sometimes when shots don’t fall, we get a little slow on defense, but keeping it together down there helped our offense get going more."

After the season ends — whenever that may be — Fyke said she'll need surgery on her thumb, but until then she'll keep being a catalyst on what could be a long postseason run. Winning a regional championship, she said, is a new normal. Sectionals are the next stop, and the combination of Fyke and Newbon give the Bulldogs more than enough of a chance.

“Once we both get rolling, I feel like it’s pretty hard for teams to stop us," Fyke said.

PHOTOS: St. Teresa girls win their own Class 1A regional

Charleston senior Morgan Hutchins' basketball career may be over, but she's still in her prime with her other competitive hobby — cattle showing — that has already led to winning national events.

Here are the polls with the Class 1A/2A girls postseason underway. Check out where area teams are ranked this week.

MacArthur boys use defense to spur offense in win over Jacksonville

There's an innate gamble in the type of press-and-trap defense MacArthur boys basketball coach Ron Ingram runs, and he knows it. When it works, the Generals force turnovers in droves. When it doesn't work, teams can get easy runs at the basket on the other end.

WAGNER: What to watch for in the high school girls basketball postseason

The Class 1A and 2A regoinals begin on Monday and Class 3A and 4A begin a week from Monday.

The Trojans were missing head coach Brad Oakley and had eight healthy players in Friday's loss to Taylorville because of an illness that gripped the team all week.

Central A&M boys too much for St. Teresa, repeat as CIC Tournament champions

MOWEAQUA — St. Teresa hung around with Central A&M in the Central Illinois Conference Tournament championship, even leading 15-13 at the e…

Christian Stoner is the man in the middle for St. Teresa boys basketball

In the summer, Tom Noonan's message to Christian Stoner was simple: Keep developing.

Burgener moved from the team's sixth man last season to a starter this year, and Hutchins grabs rebounds and attacks the rim through contact.

'You have to make something happen,' MacArthur junior Nick Spannaus clutch late in games

Spannaus has two game-winning shots for MacArthur in the last three games.

Phillips is averaging 14.3 points, 3.1 rebounds, 4.5 assists and 2.1 steals, and was key in Tuesday's win against Springfield Sacred Heart-Griffin.

Check out the area leaders.

Check out the area leaders.

Macon County will invade the Champaign (St. Thomas More) Sectional, and Eisenhower and MacArthur will also begin postseason play in Class 3A.

From just to the right of the hoop, Addie Fyke laid on the floor in dismay. She had to process the reality that her layup just above and to the right of the rim, bounced off the glass and fell safely through the net as the fourth-quarter buzzer sounded in the background.

CHAMPAIGN — Brittney Oakley knows how far the journey has been.

When the buzzer sounded on Thursday in a 69-32 win over Mahomet-Seymour, MacArthur (29-3) had its second consecutive regional championship.

St. Teresa wins 70-34 against Mount Pulaski on Thursday for the Class 1A regional finals at St. Teresa High School.