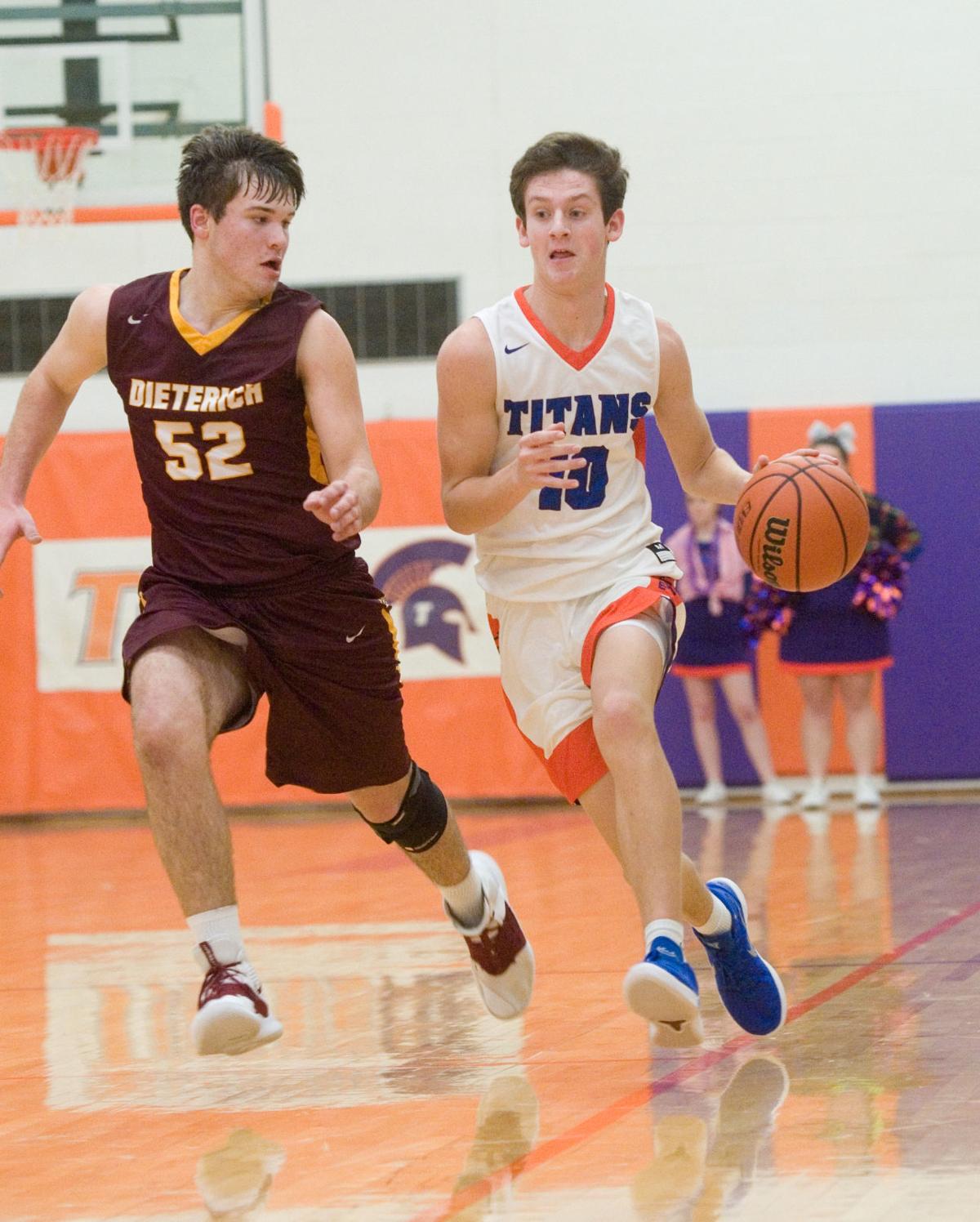 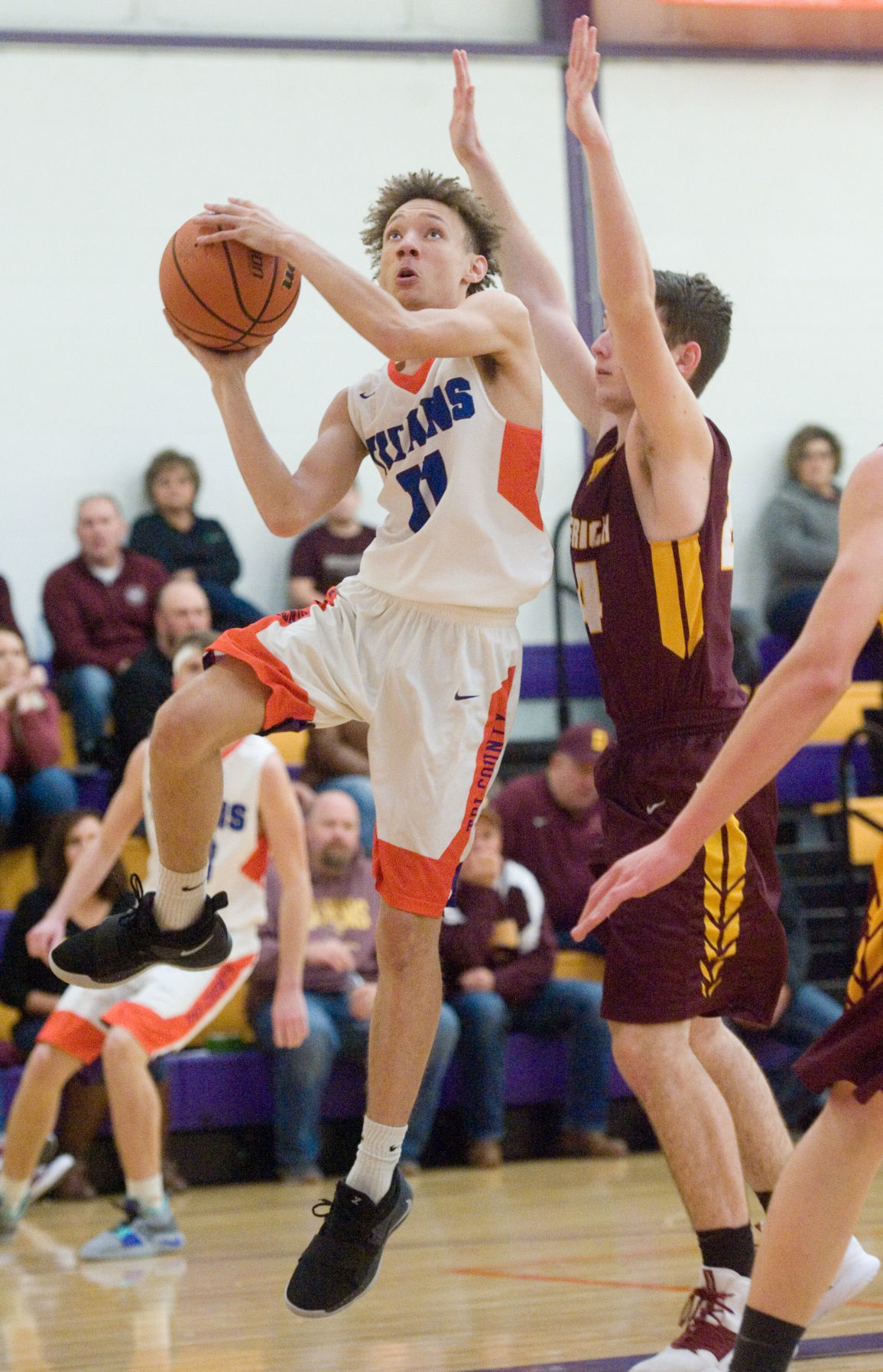 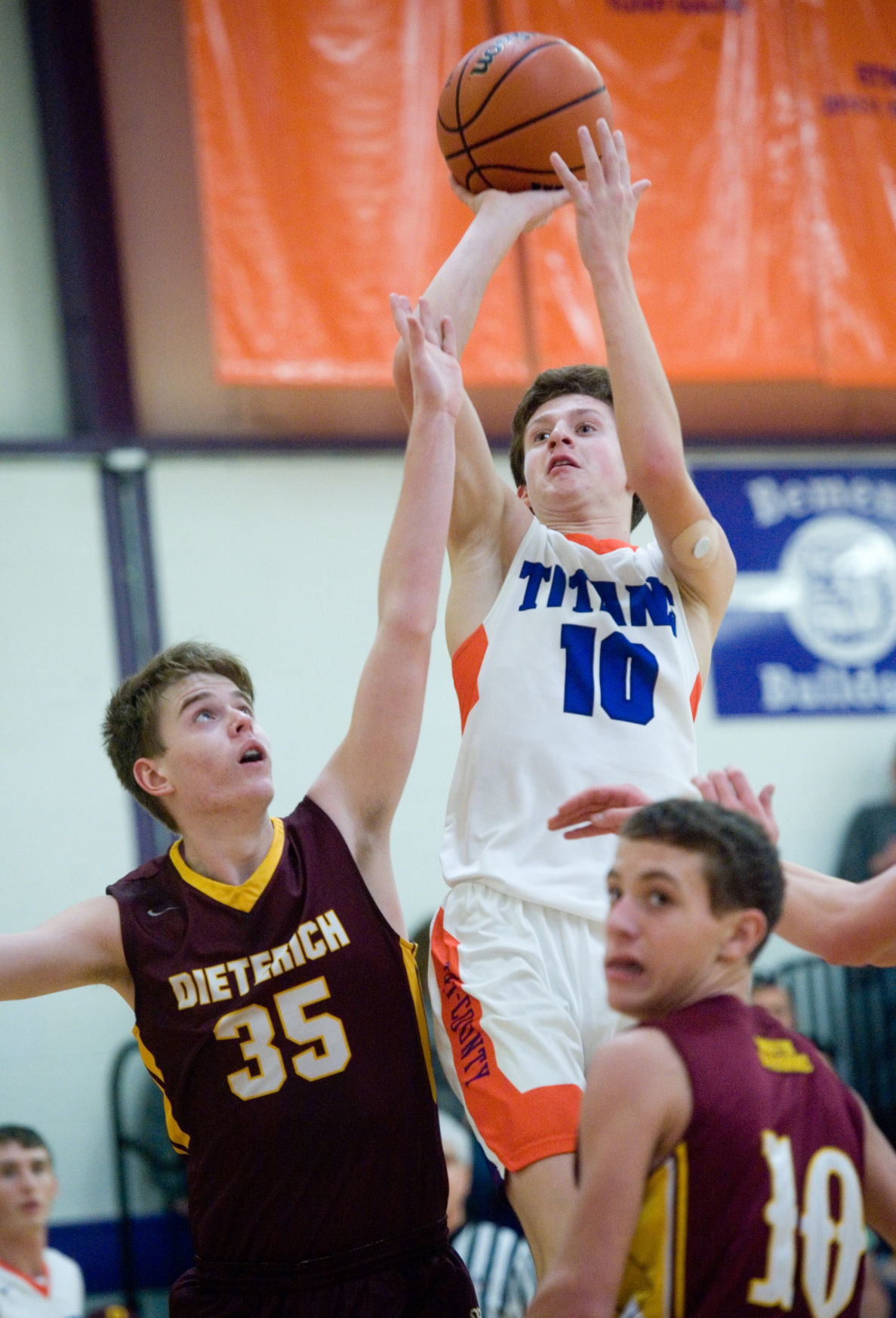 Tri-County's Mitch Pollock, background, puts up a shot against Dieterich at Kansas High School in Kansas on Friday.

DECATUR -- MacArthur jumped out to a quick 10-point lead after the first quarter and then exploded for 28 points in the second to comfortably defeat Central State 8 rival Rochester 89-60 Friday.

The Generals were led by Keon Jones who continues to light up the scoreboard with 21 points.

"Jones led us with scoring tonight and he's averaging right around 20 or 21 points a game. We actually sat him in the fourth quarter and didn't play him," Ingram said.

Kaeden Lawary also had a strong performance for MacArthur, falling a rebound short of a double-double.

"Kaeden had 18 points, nine rebounds and two blocked shots. He played big for us in the post," Ingram said. "The other guys just played hard and did what they had to do to finish out the game for us."

DECATUR -- With a smaller lineup, Eisenhower's boys basketball team lives or dies by their outside shooting. In Friday's Central State 8 matchup with Chatham Glenwood, the Panthers were ice cold, making 13 of their 34 attempts.

"This was another tough one for the young Panthers. By far, this was the worst shooting display we ever had. Right now, we are in the trenches. Besides being young, we are small, and any physical play takes a toll on the boys, especially on the rebounds," Eisenhower coach Rodney Walker said. "It's a process, and you can't teach grit. We will keep teaching and grinding it out like true Panthers do."

Glenwood, led by Bradyn Kilby's game-high 19 points, led 26-22 at halftime. The Titans limited Eisenhower to just 12 points in the second half.

Deterich started the second half the same way it did the first half by attacking the basket. The Movin' Maroons made 7-of-10 during the pivotal run that took 3:01. The run began with baskets by Derek Kuhl and a turn around by Colin Hartke made it 37-26 with 6:05 left in the third. Hartke scored the last four points of the run for the 18-point lead.

The Titans (12-9)used a 12-3 run to get the deficit back to single digits. Sophomore Cole McClain sank two shots and after a three-pointer by Dieterich's Dalton Budde, the third ended with buckets by Trenton Pinnell and McClain. A basket by Mason Hutchinson and two free throws by Pinnell made it a nine-point game.

Dieterich (13-7) led by as much as 10 in the first half, 19-9 after two free throws by Derek Kuhl with 2:03 left in the opening quarter. The Movin' Maroons were able to get the ball inside early hitting six of their first seven field goals, including a three-pointer by Hartke.

Tri-County's man-to-man defense tightened up and they scored six unanswered points starting with baskets by Kenzal Lloyd and by Caleb Ard to end the scoring in the first. Pinnell scored the first basket of the second quarter and it was 19-15. The Titans got within four one more time in the quarter, 23-19, but each time they did Dieterich would answer.

Hartke led all players with 20 points, while 6-4 sophomore Cole Niebrugge had 16 points for Dieterich, which was also helped by 13-of-17 shooting from the free throw line as a team. The Titans were led by Hutchinson with 13 points.

MOUNT PULASKI — Skylar Hayes doesn't really want to be in the spotlight, but the spotlight seems to find her.

DECATUR — If players on the MacArthur girls basketball team expected their coach, Michael Williams, to walk in the locker room and scream afte…

DECATUR — For St. Teresa’s Addison Newbon, one thing leads to another.

DECATUR — Watching Eisenhower senior Alexia Johnson hurl her bowling ball down the lane, it's hard to imaging that when she joined the Panther…

Tri-County's Mitch Pollock, background, puts up a shot against Dieterich at Kansas High School in Kansas on Friday.