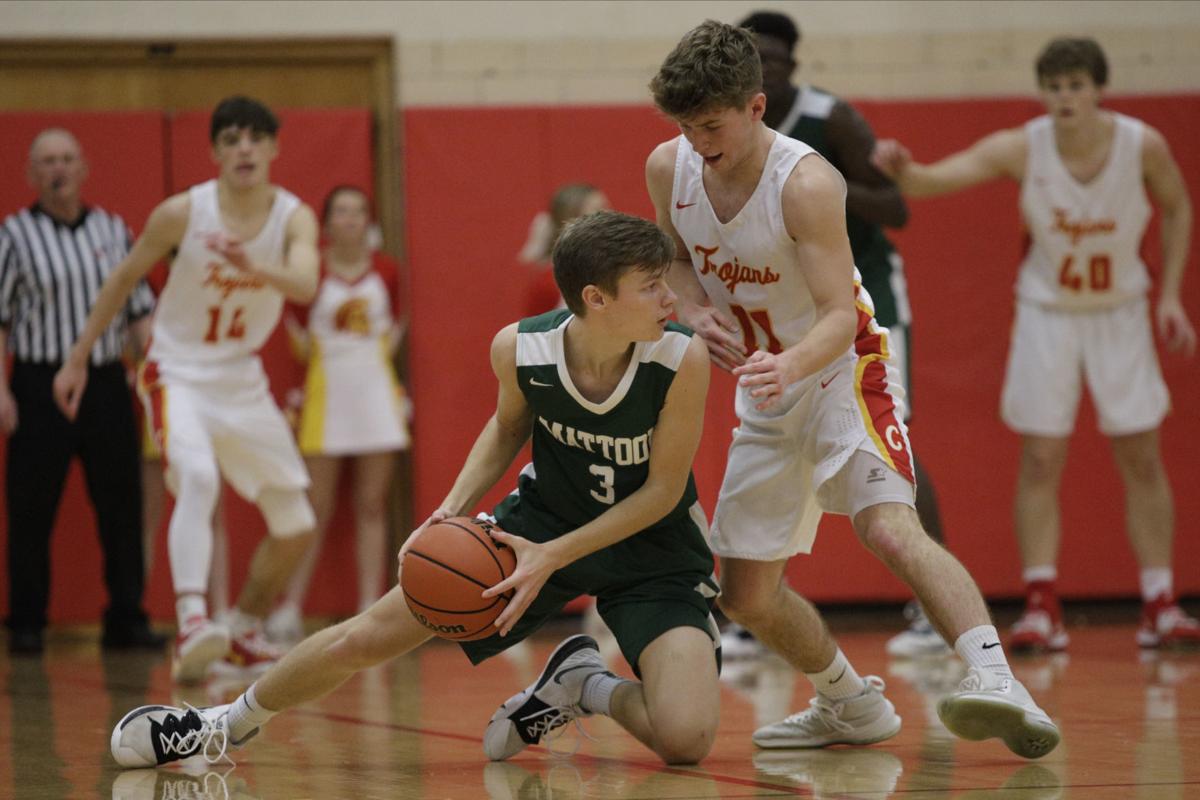 Mattoon guard Josiah Morton tries to keep his dribble alive in the first half of Friday's game against Charleston. 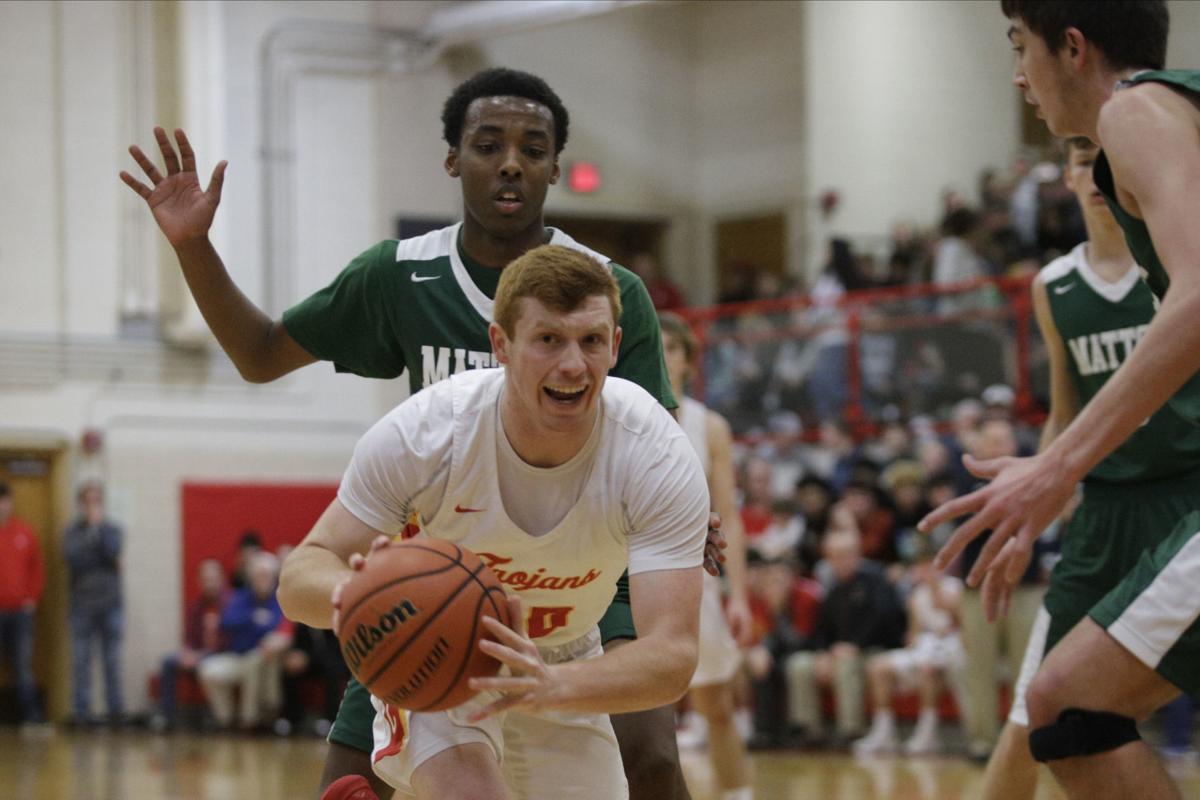 Charleston senior Lane Harrell looks for space to dribble against Mattoon's defense in the first half of Friday's game. 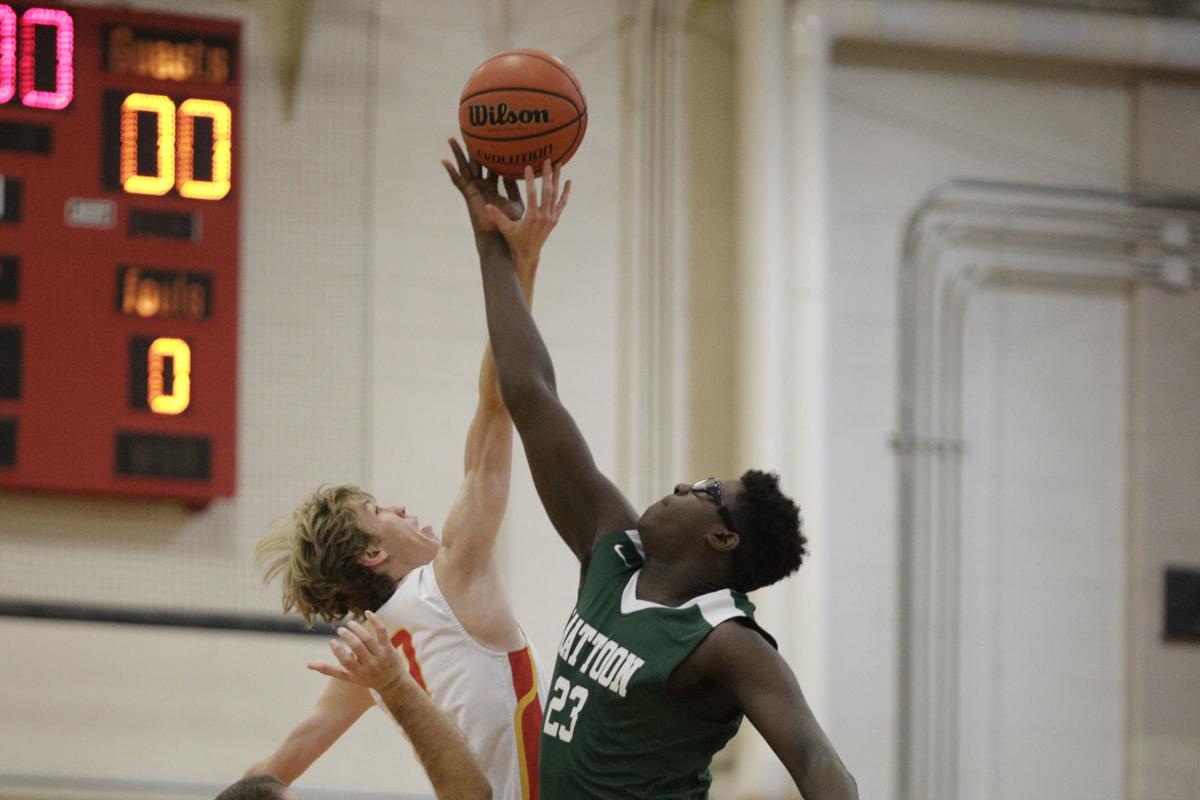 CHARLESTON – For 70 seconds of game time, Baker Gym drew quiet and hung on every dribble and pass as Charleston milked the game clock for one final shot.

This packed house was not treated to a flashy play that will go on a highlight reel. But, more importantly, it did decide the game.

Cade Landrus sank two free throws with 15 seconds left after he was fouled 30 feet from the basket on a reach-in, a proper ending to a slugfest of a game, as Charleston defeated Mattoon 53-49 Friday night, its first win in the series since 2018. This was the second straight game between the two rivals decided in the final 20 seconds.

Charleston led for 15 seconds all night. They were, of course, the most important seconds. The Trojans erased an early third quarter 13-point deficit to come back and win. They scored just 17 points in the first half.

For the first half and small part of the second, this one had a different feel than recent meetings, a lower-scoring game where jumpers drew iron and the two student sections drew each other’s constant ire. Until, that is, the fourth quarter brought optimal mania fitting of this rivalry. Charleston outscored Mattoon 19-8 in the final eight minutes, its offense finally coming alive against a Mattoon zone that ensnared it for two-plus quarters.

A four-point possession where Sam Bickford was fouled on a putback and Caleb Hurst made a jumper after a deadball rebound went back to Charleston tied the score at 45 with 3:40 left. Sam Bradbury’s layup with 3:32 left snapped a 45-45 tie and Cam’Ron Thomas followed with two free throws to give Mattoon a four-point lead. Hurst and Miller each made a pair of foul shots to knot it at 49 with 2:10 left.

From there, Charleston forced a turnover and decided to hold the ball for over a minute for the final shot. Mattoon had not turned the ball over all quarter until then.

To get here, the Trojans had to awake from a first-half slumber. Mattoon’s defense, primarily a 2-3 zone, lulled Charleston into a repetitive offense where all it could really muster in the half-court was a pass into the middle of the zone and a kick out for a 3-pointer.

The Green Wave’s rotations were sound, allowing few clean shots. Charleston did not score in its half-court offense in the entire second quarter, in which it managed just three points. Mattoon closed the first half on a 10-3 run and led 27-17 at halftime. Bradbury had six of those points.

The Trojans made four 3-pointers in the first quarter, the first two from Hurst off Isaac Miller passes. As the game went on, Hurst became a facilitator when he caught the ball in the middle of the zone and looked for shooters. By unofficial count, he had four assists to go with his game-high 17 points. Including assists, he accounted for 28 of Charleston’s 53 points.

Landrus had 10 points for Charleston.

Here are the Girls Basketball Stat Leaders as of Jan. 9, 2020

Here are the Boys Basketball Stat Leaders as of Jan. 9, 2020

Mattoon guard Josiah Morton tries to keep his dribble alive in the first half of Friday's game against Charleston.

Charleston senior Lane Harrell looks for space to dribble against Mattoon's defense in the first half of Friday's game.