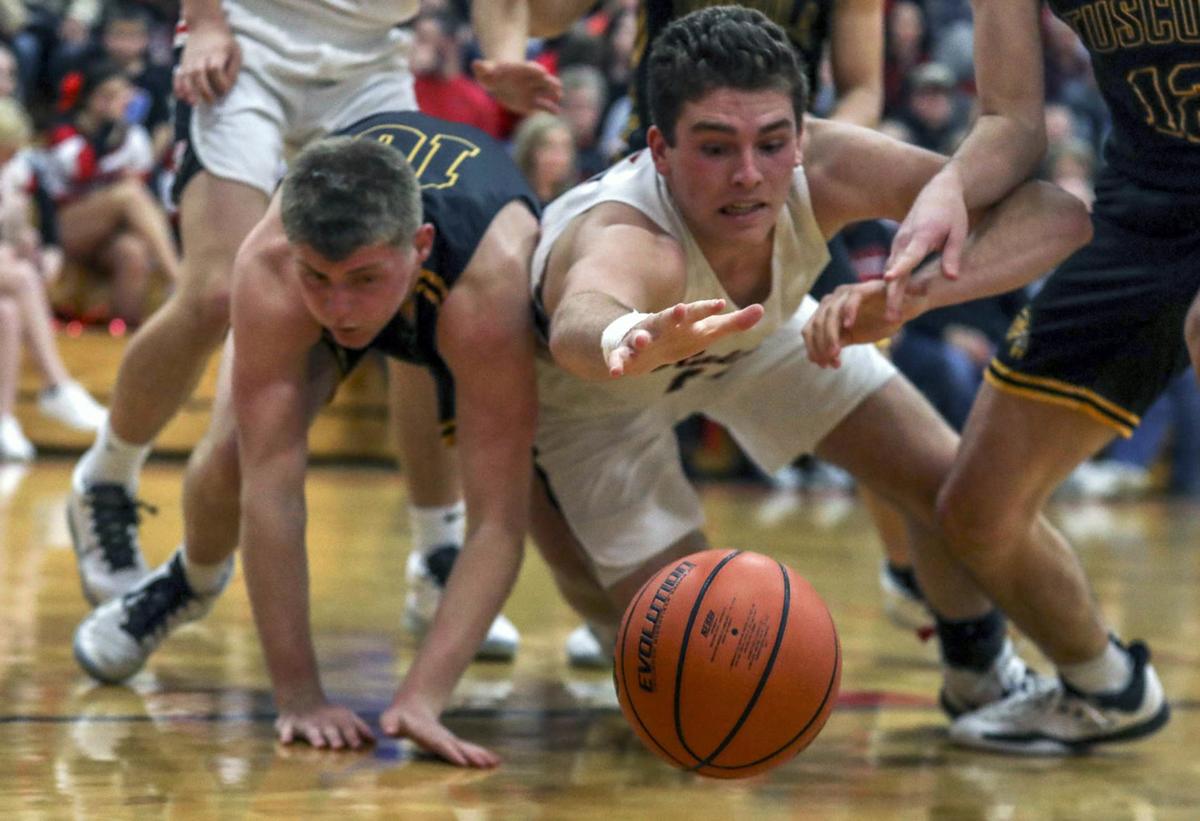 Central A&M's Griffin Andricks (14) goes after a ball against Tuscola on Tuesday. Andricks's physical play has been critical for the Raiders this season. 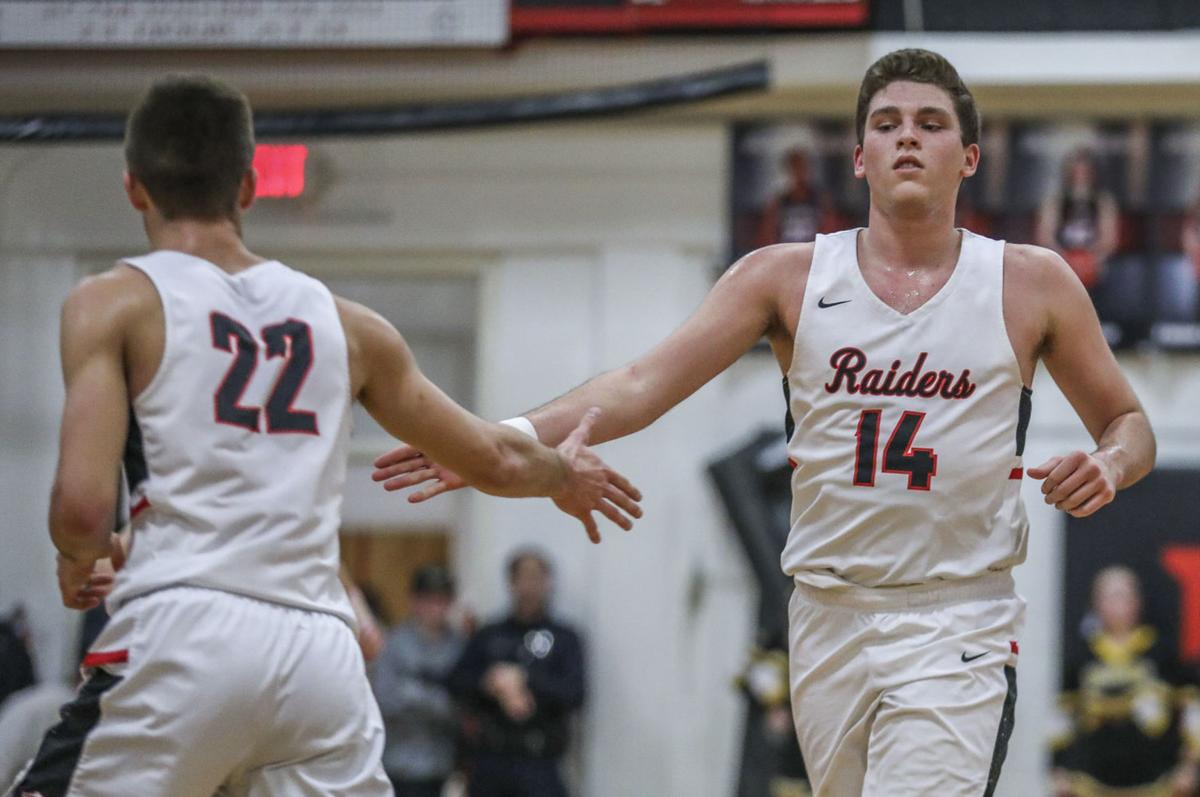 Central A&M's Griffin Andricks (14) and Connor Heaton (22) celebrate in the second quarter against Tuscola on Tuesday. Andricks has averaged 18.3 points and 9.6 rebounds per game this season. 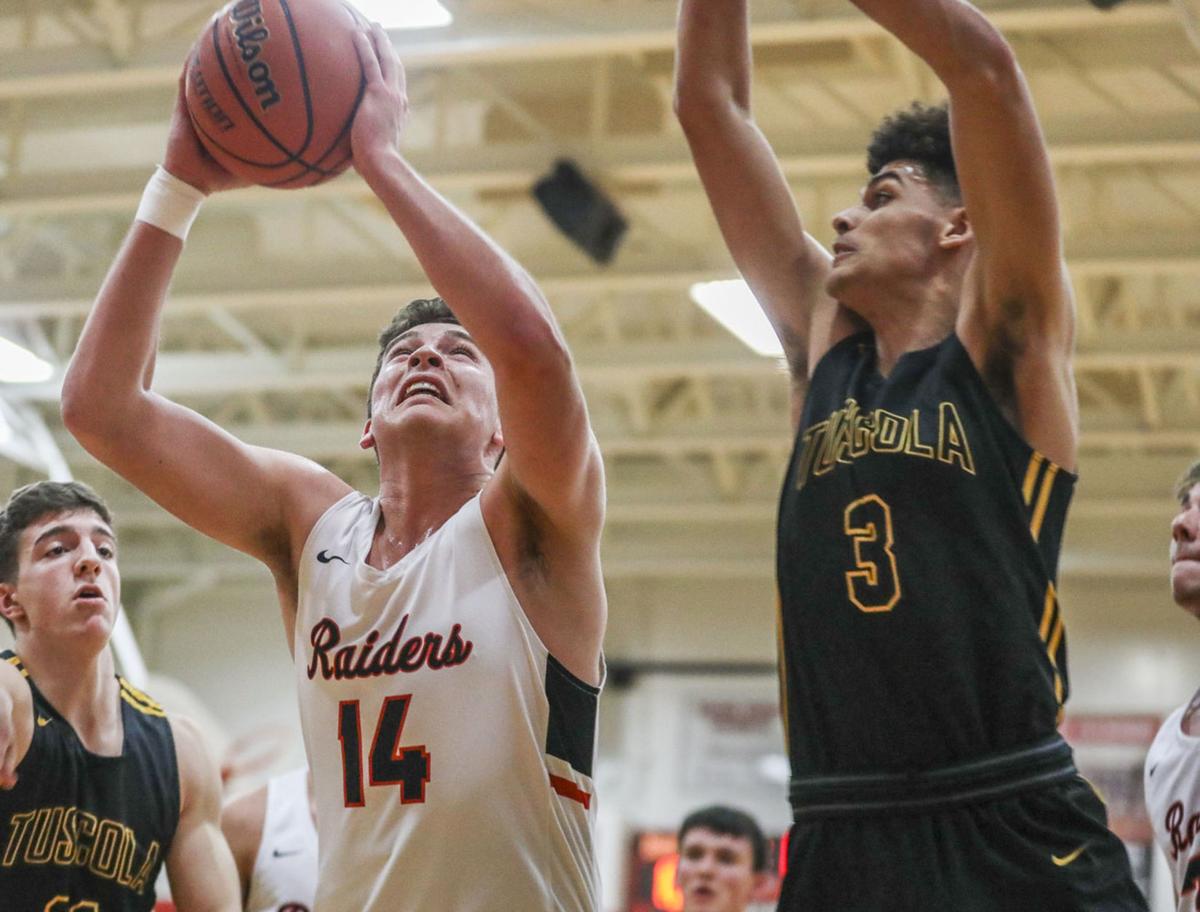 Central A&M's Griffin Andricks (14) grabs a rebound against Tuscola on Tuesday. Andricks has averaged 9.6 rebounds per game this season.

MOWEAQUA — As Central A&M’s Connor Heaton and Jacob Paradee were leading the football team to the Class 1A state championship game in November, Griffin Andricks was in the stands supporting them every step of the way.

Andricks never really got into football. When his family moved from Moweaqua to the Bloomington area as a child, his friends there didn't play and he never picked up the sport. So when he moved back to Moweaqua for his sophomore year, he became a big booster for the Raiders football team.

"It was a lot of fun to watch them this year," Andricks said. "I needed to be there to support them."

Andricks also helped hold things down in basketball practice until the football players joined the team. But now those football players have made the successful shift to the hardwood. Heaton, Paradee and Andricks are the three captains of the No. 2-ranked in Class 1A Raiders' basketball team (14-2, 2-0 CIC), which looks like a team that will be battling at the state tournament again this season.

Each Raiders captain has their own strength. Heaton is the Raiders all-time leading scorer, Paradee has unstoppable ball-handling skills, and Andricks is the rare 6-6 big man that is dangerous behind the 3-point line.

"(Griffin) is unbelievable shooting the ball," Paradee said. "There is not one night when he is off and it is incredible what he can do on the court.

"Coming into the game you might not think a tall guy like that can shoot the ball the way he does. He grabs those boards, too, and he is a really important part of this team."

Heaton and Paradee motivate the team with their words; Andricks sets the example.

"Connor and Jacob, they are more the spokespeople and I just go out there and play my tail off and people follow along," Andricks said. "I don't care about recognition. We all play as a team."

Andricks averages a hair under a double-double a night with 18.3 points per game and 9.6 rebounds. He is 29-for-59 from behind the 3-point line, making him the Raiders' top deep threat. He works on his perimeter shooting constantly, something his picked up from his father, Brett Andricks, a Mount Zion graduate and the Herald & Review Macon County Player of the Year in 1986.

"People around here typically don't expect big guys to shoot from out there but that is one of the things that I work on the most," Andricks said. "My dad was a really good shooter when he was in high school so he has instilled that in my brain to be a good shooter and repetition. Over Christmas break, I was in the gym every day getting 500 shots just around the 3-point line consistently."

During Tuesday night's battle with then-undefeated Tuscola, Andricks hit two 3-pointers and finished with a team-high 23 points, 10 rebounds and three blocks in a  61-39 win.

"He's an excellent shooter and a good all-around player," Central A&M coach Rob Smith said of Andricks. "(Over his years), I think he has gotten physically stronger and he holds his ground a lot better. He always makes great decisions with the ball."

Even when Andricks has a career night as he did when Raiders faced Meridian on Jan. 10 — Andricks scored 37 points and came down with 16 rebounds — his focus is always on his teammates.

"It was a heck of a game," Andricks said. "We all played well. That was the best part of that game. It was my favorite game of the season. Everyone was scoring, everyone was playing well — defense and offense."

"I was honored when we got back from state and it's just awesome," Andricks said. "(Connor and Jacob) are two really good players and two of my best friends, and it is great to see them do that. They have worked all their lives to be this good and it has paid off."

Next season, Andricks plans to play basketball for Olivet Nazarene University in Bourbonnais, but before then, he has more pressing matters. The Raiders face St. Teresa (11-7, 3-0 CIC) on Friday in a key CIC battle. The Raider beat the Bulldogs in the championship game of the Macon County Tournament in December, 62-54, and are looking for another win ahead of a possible third matchup in the CIC Tournament.

"We didn't play very well against them the first time but we came out with the win," Andricks said. "We were in football mode at the start of the season but I feel like we have come together. It was kind of hard at the beginning of the season but I think we are back in the flow now. We are clicking and now we are in basketball mode."

PHOTOS: No. 2 Central A&M boys cruise past No. 10 Tuscola

MOWEAQUA — Tuscola is undefeated no longer.

Weakly was a player the last time Central A&M made state. This year, he led them back as a coach.

Paradee helped lead Central A&M to the Class 1A state championship game for the first time since 2001.

Central A&M's Griffin Andricks (14) goes after a ball against Tuscola on Tuesday. Andricks's physical play has been critical for the Raiders this season.

Central A&M's Griffin Andricks (14) and Connor Heaton (22) celebrate in the second quarter against Tuscola on Tuesday. Andricks has averaged 18.3 points and 9.6 rebounds per game this season.

Central A&M's Griffin Andricks (14) grabs a rebound against Tuscola on Tuesday. Andricks has averaged 9.6 rebounds per game this season.