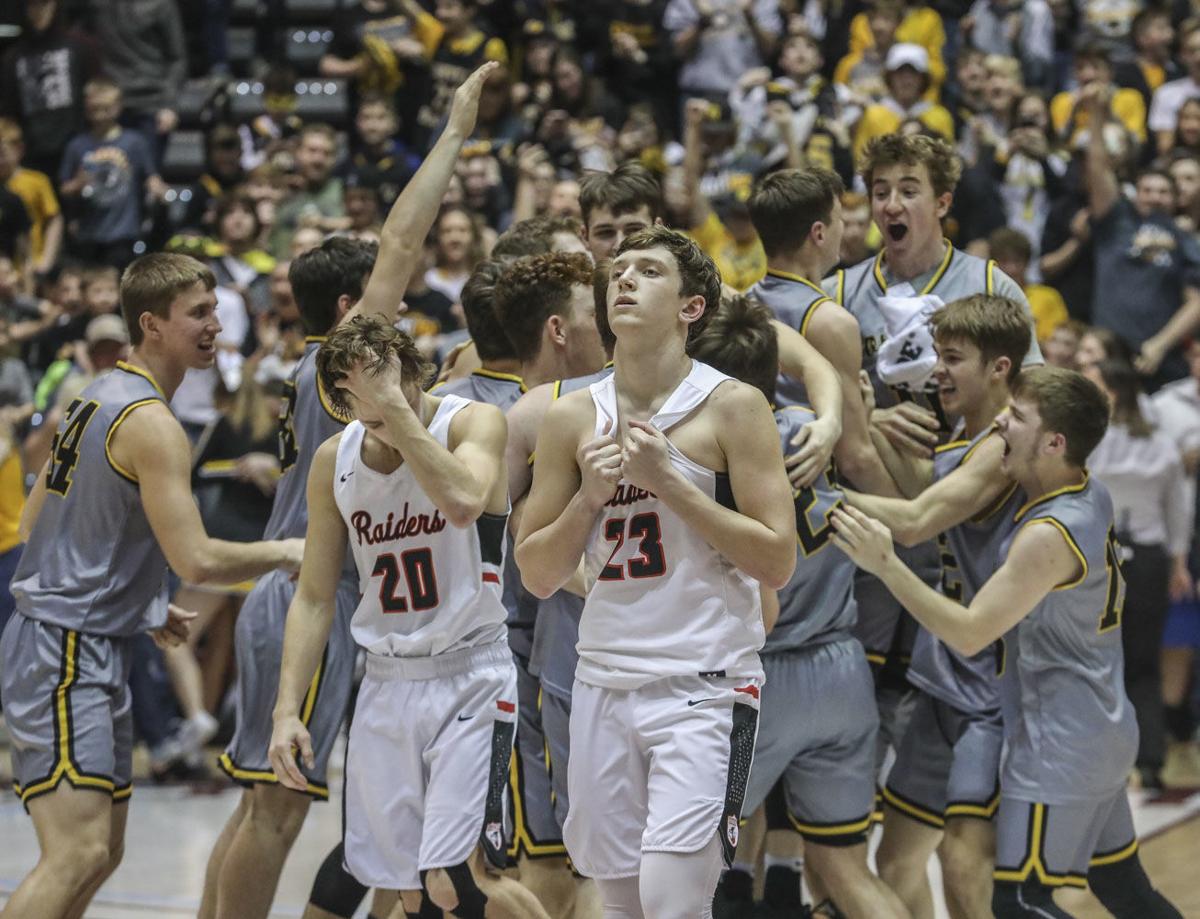 Central A&M's Jacob Paradee (20) , left, and Brycen Burgener (23) walk off the court as Goreville celebrates after the 71-64 loss on Tuesday during the Class 1A  Carbondale (SIU) Super-Sectional. More photos at www.herald-review.com 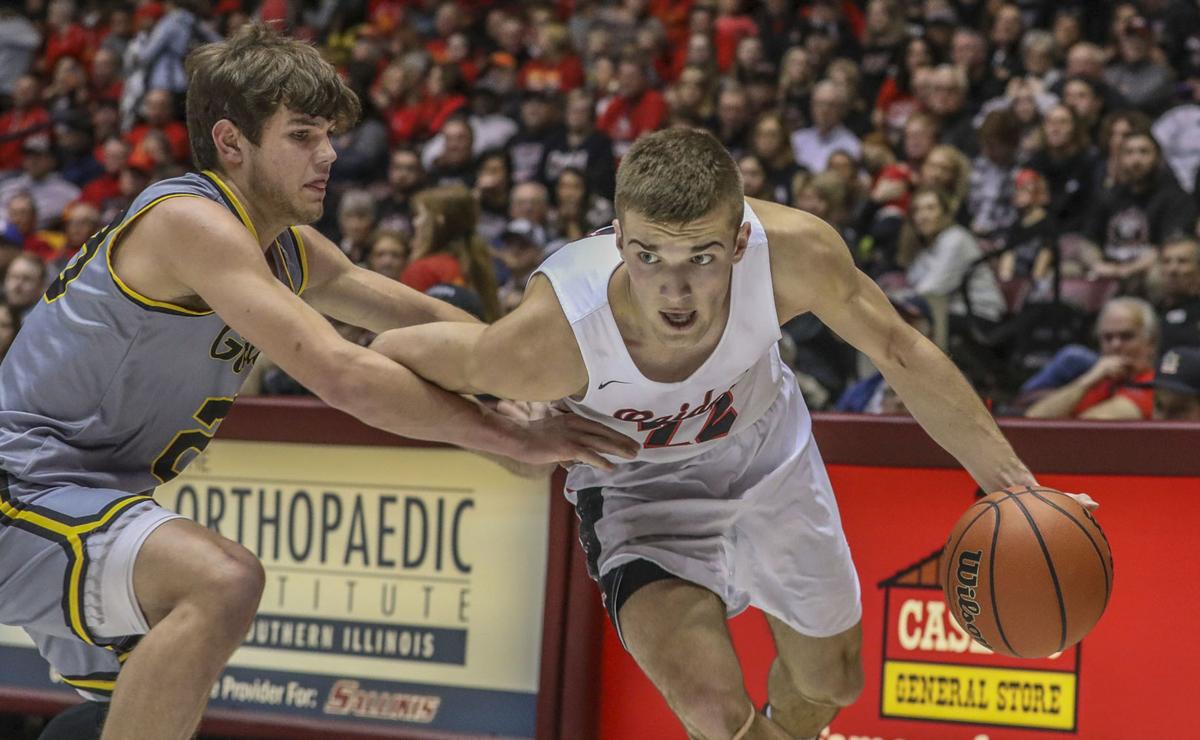 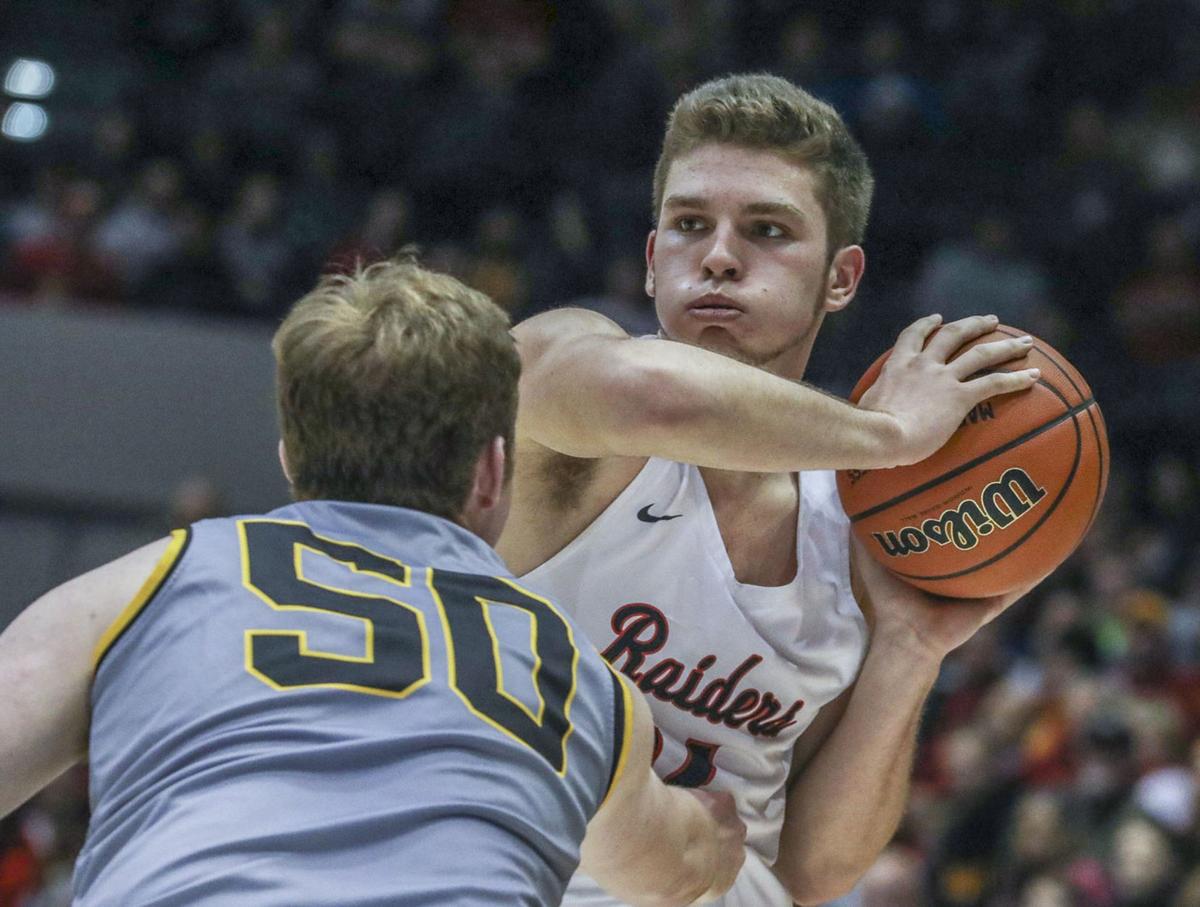 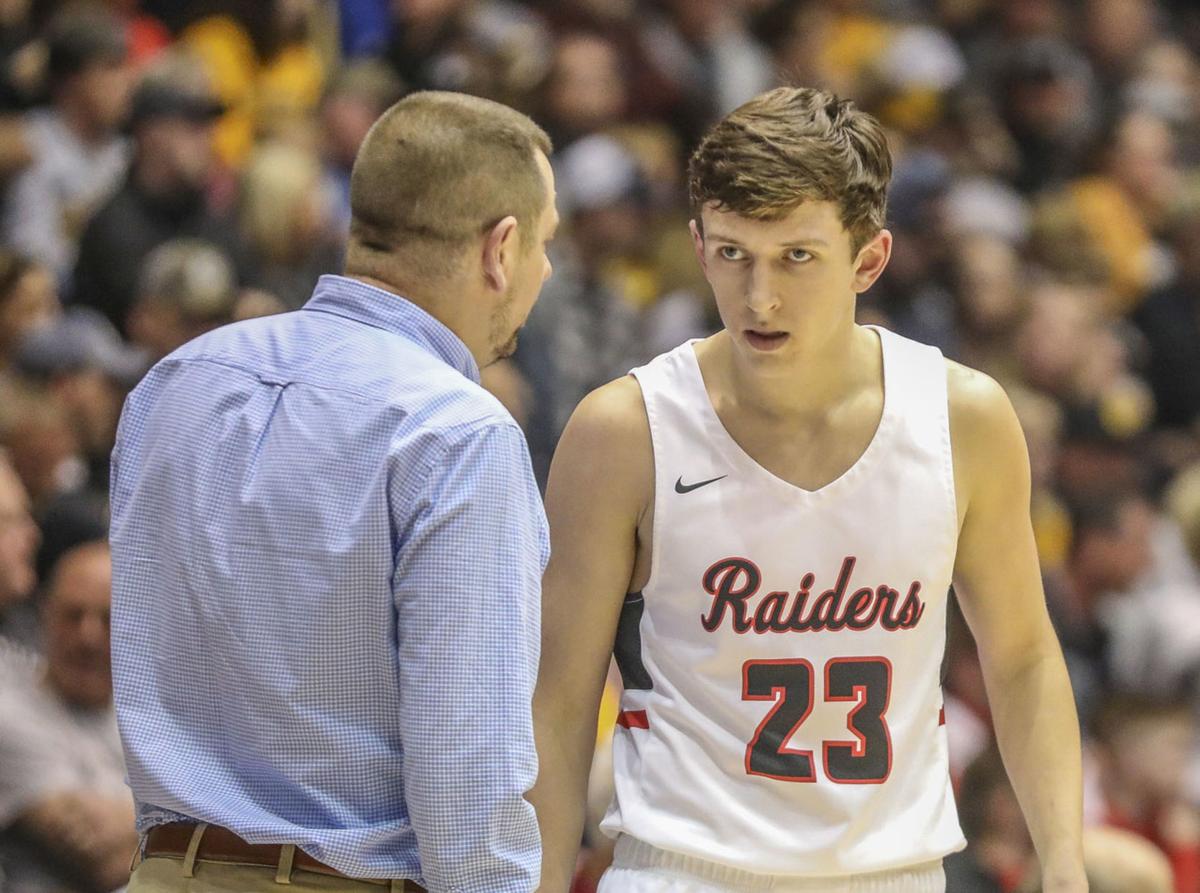 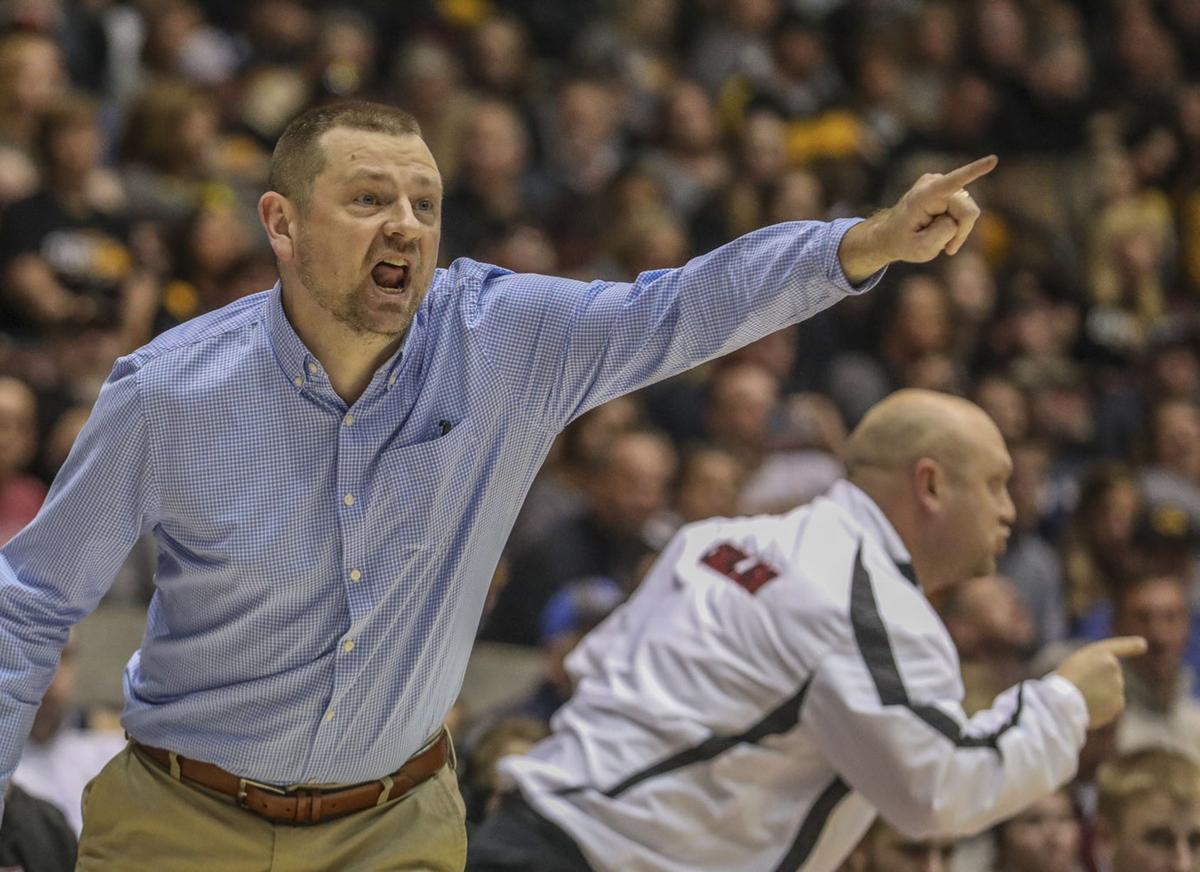 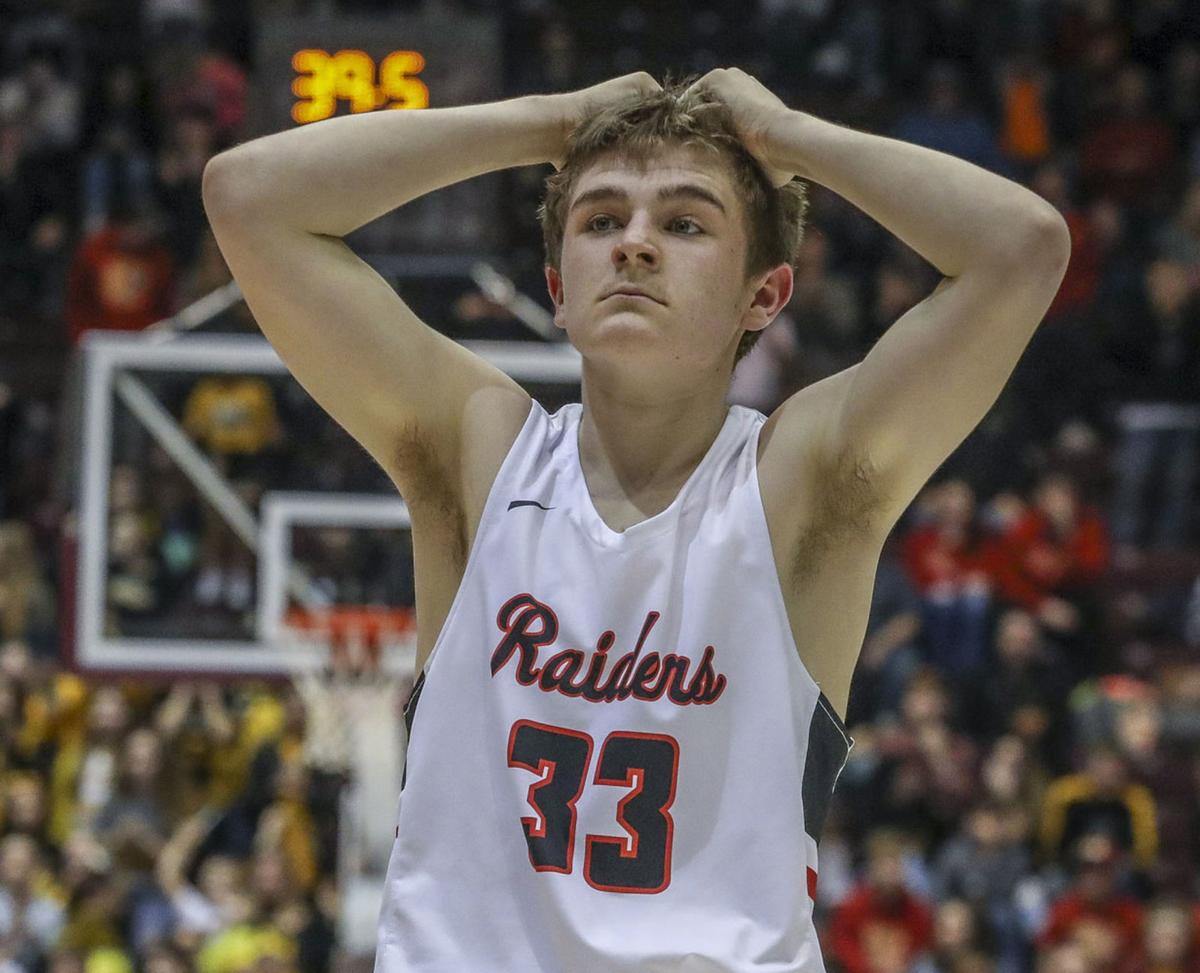 Central A&M Chris Enge (33) shows his emotions towards the end of the game against Goreville on Tuesday.

CARBONDALE — Connor Heaton and Brycen Burgener crouched down just inside the free-throw line, as if to absorb the reality of the moment of which they were stuck.

On the other end of the court, Goreville senior Luke Brown was hitting a pair of free throws with 0.2 seconds left on the clock to seal a 71-64 win in the Class 1A Carbondale (SIU) Super-sectional on Tuesday night over Central A&M. It's the second time in three seasons that Goreville has beaten A&M in the super-sectionals.

The loss abruptly ended Central A&M's season and ended what was a dominant three-year stretch of basketball that included a Class 1A third-place trophy, three super-sectional appearances and culminated in an 85-17 record.

"It was tough leaving that locker room and just knowing we're not going to come back next year and play with each other," A&M senior Griffin Andricks said. "It's part of life, you've got to get on to the next phase, but these guys mean the world to me. This is just real tough."

Goreville was on the cusp of punching its ticket to state comfortably with a 10-point lead and 2:21 left in the game before Central A&M (30-4) senior Connor Heaton reached back and took one more massive swing. He went on a personal 7-0 run to get the Raiders within three, 62-59, with 51.2 seconds left to go, but Goreville hit its free throws and sealed the game. Heaton finished with a game-high 29 points. Andricks had 15 points and Jacob Paradee had 10.

"It just wasn't there tonight.," Paradee said. "Coming into the game, we were pretty confident, then something just didn't click. We got in early foul trouble and that kind of hurt us. Our heads kind of got down. We had a 10-point lead and we blew it."

The Raiders had a 10-point first-half lead before Goreville stormed back to tie the game 31-all at halftime. The Blackcats (31-2) subbed players in and out of the game at rapid succession, playing 11 total players with four in double-figures and three players with eight points.

"Super deep team," Heaton said. "We're not used to that in 1A, there's not a lot of teams that play even more than eight guys. Foul trouble doesn't matter to them, really. They had a lot players. When they subbed, it was tough to react to it and keep go it with the pace of the game."

Said Andricks: "It's hard to keep up with that because we have just five guys, pretty much, I mean, we have a good bench but they have eight guys who can just rotate in and play non-stop and come back in and play 100 miles per hour. They've got shooters, they've got drivers, they've got everything. It's just tough going against that."

Goreville closed first half on a 15-6 run to tie the game took a lead on a 3-pointer early in the third quarter and never relinquished it as a part of a 12-2 run. The Raiders got as close as two points in the fourth, but Goreville had an answer for every run.

"It just seemed like key shots didn't fall or they got key rebounds or key turnovers," A&M coach Rob Smith said. "It just had a weird feel to it. You can't really attribute it to one thing and say: That was the game. There are certain things you can look at and say, 'We didn't do this or they did this.' It was a culmination of multiple things."

Members of the team slowly began to file out of the locker room, eyes read and voices breaking. The moment was hitting them. They've been a runaway train in the area and in Class 1A basketball around the state for three seasons and have played together since they were in fourth grade, and probably sooner on whatever miniature hoop would have them.

Senior Connor Hutchins joined the mix when they were freshman and Andricks moved back to his hometown when he was a sophomore. There was a chemistry to the team that paved the way for back-to-back 30-win seasons.

Each will have their next stop: Some will play football, some basketball and some won't. It's a part of life, and they know it, but they weren't ready to face it on a Tuesday night in Carbondale.

"It's hard to put into words what these guys mean to me and what we mean to each other," Paradee said. "It's definitely going to be the hardest thing moving away and leaving these guys."

Said Heaton: "It's tough to talk about. We're just super close and I know all those guys are going to go on and be successful. I'll always remember playing with them. I just love those guys to death."

Smith and his coaching staff have built in phrases for the last three seasons, from "Beat Nokomis" to "Why not us." This year's was, "We'd rather be us," and Smith still would.

"It's hard to put into words what they meant for this program," Smith said of the seniors. "I could talk forever about it. Whenever you can put together a run like that, it's pretty special. ... We'd rather be us, win or lose. We talked beyond basketball and wished the seniors luck and said they were going to be successful in whatever they do."

MATTOON — The third time was not the charm for Eisenhower against fellow Central State Eight Conference foe, Springfield Lanphier. Although fo…

Lincoln slips past Danville for Class 3A regional title

Lincoln scored the final four points to edge Danville, 60-56, in the Class 3A Bloomington Regional.

Connor Heaton got his hands on a pass and started his break. His path to the rim was unimpeded and he knew exactly what to do. Heaton slowed down just enough, left his feet and hammered home a one-handed dunk with 31 seconds left on Friday.

MacArthur forward Nick Spannaus was honest about his play in the first three quarters of the Generals' Class 3A Springfield Regional championship game against Springfield on Friday -- he was nervous and it disrupted his game.

Central A&M will play in its third straight super-sectional on Tuesday, but has faced its most difficult path in three years to get there.

Here are the postseason basketball schedules for area teams.

When his shots aren't falling, R.J. Walker has a tendency to let his confidence begin to waver a bit.

Connor Heaton's last seven day have been filled with ice and Ibuprofen — not that any of that was obvious on the court.

Jackson Hills will lead the Warriors (25-7) against Effingham St. Anthony at the Class 1A Casey Sectional at 7 p.m. on Wednesday.

While many areas are feeling the shortage, Newton High School and Jasper County are referee rich thanks to the arrival of four high school seniors — Braedyn Wise, Hunter Michl, Jarret Tharp and Zach Stark

For exactly 1 minute, 57 seconds, Jacob Paradee was a spectator — one of the things he least likes to be.

In an intense and physical Class 1A boys’ basketball regional championship, it was Casey-Westfield’s defense that proved to be the difference. The Warriors led by as much as 16 at one time before Okaw Valley rallied to within six with 7:06 remaining.

Lincoln boys break away from MacArthur in Class 3A sectional semifinal

Ron Ingram sat in the visitors locker room after the game with his hands pressed together trying to make sense of what just happened.

WAGNER: What has been the best single-game high school performance this school year? Let's make a bracket.

We want to know which player in the H&R-coverage area has had the best single-game performance of the 2019-20 school year.

Central A&M's Jacob Paradee (20) , left, and Brycen Burgener (23) walk off the court as Goreville celebrates after the 71-64 loss on Tuesday during the Class 1A  Carbondale (SIU) Super-Sectional. More photos at www.herald-review.com

Central A&M Chris Enge (33) shows his emotions towards the end of the game against Goreville on Tuesday.