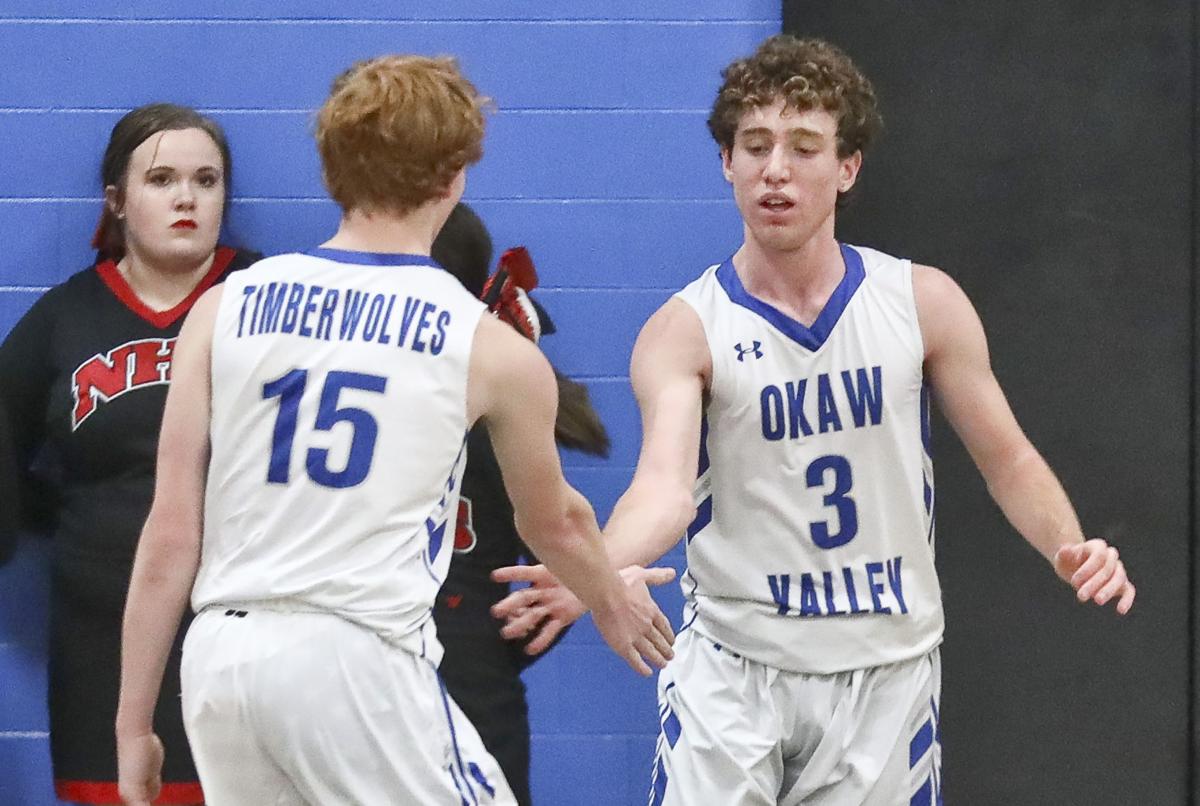 Okaw Valley's Cameron Sharp (3) and Eli Hagerman (15) celebrate after scoring against Nokomis in the first quarter on Tuesday at Okaw Valley. 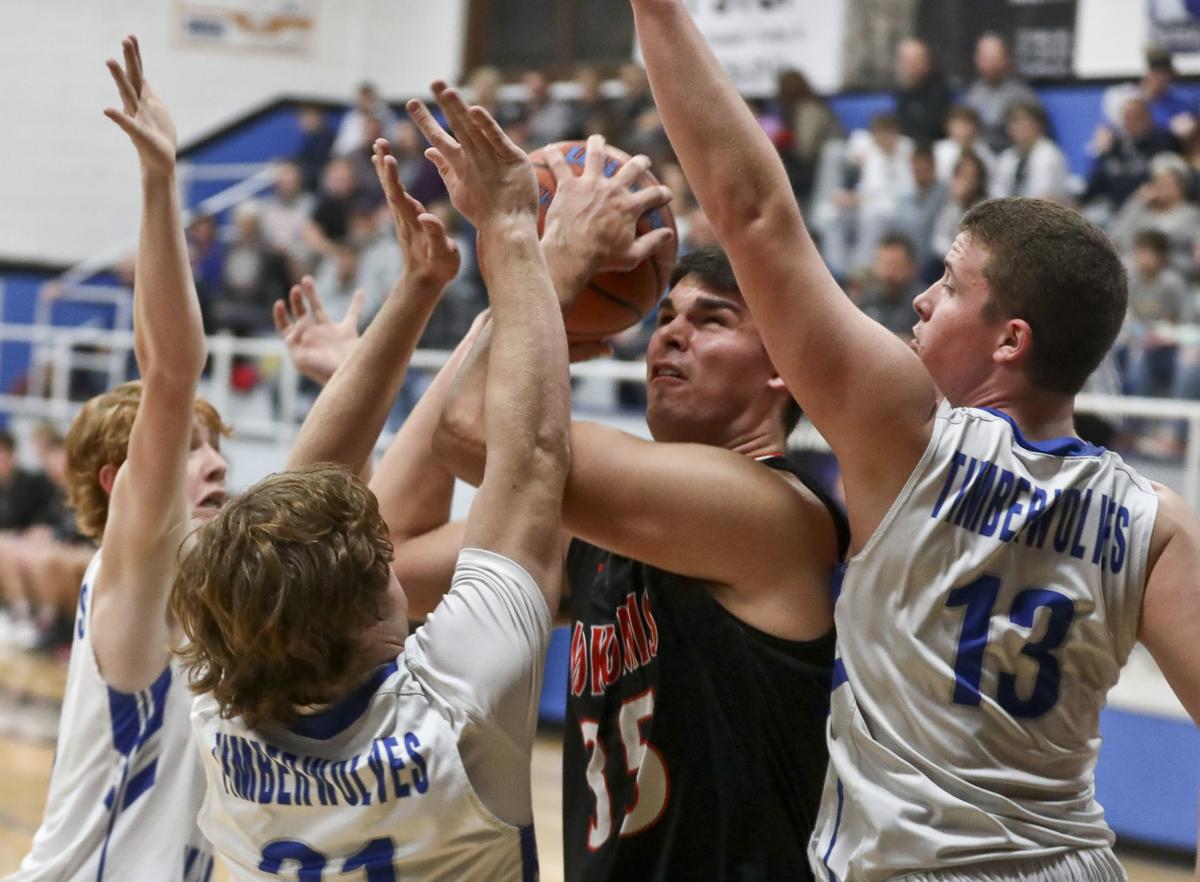 Nokomis' Carter Sobal (35) is guarded by three Okaw Valley players in the first quarter on Tuesday at Okaw Valley. More photos at www.herald-review.com 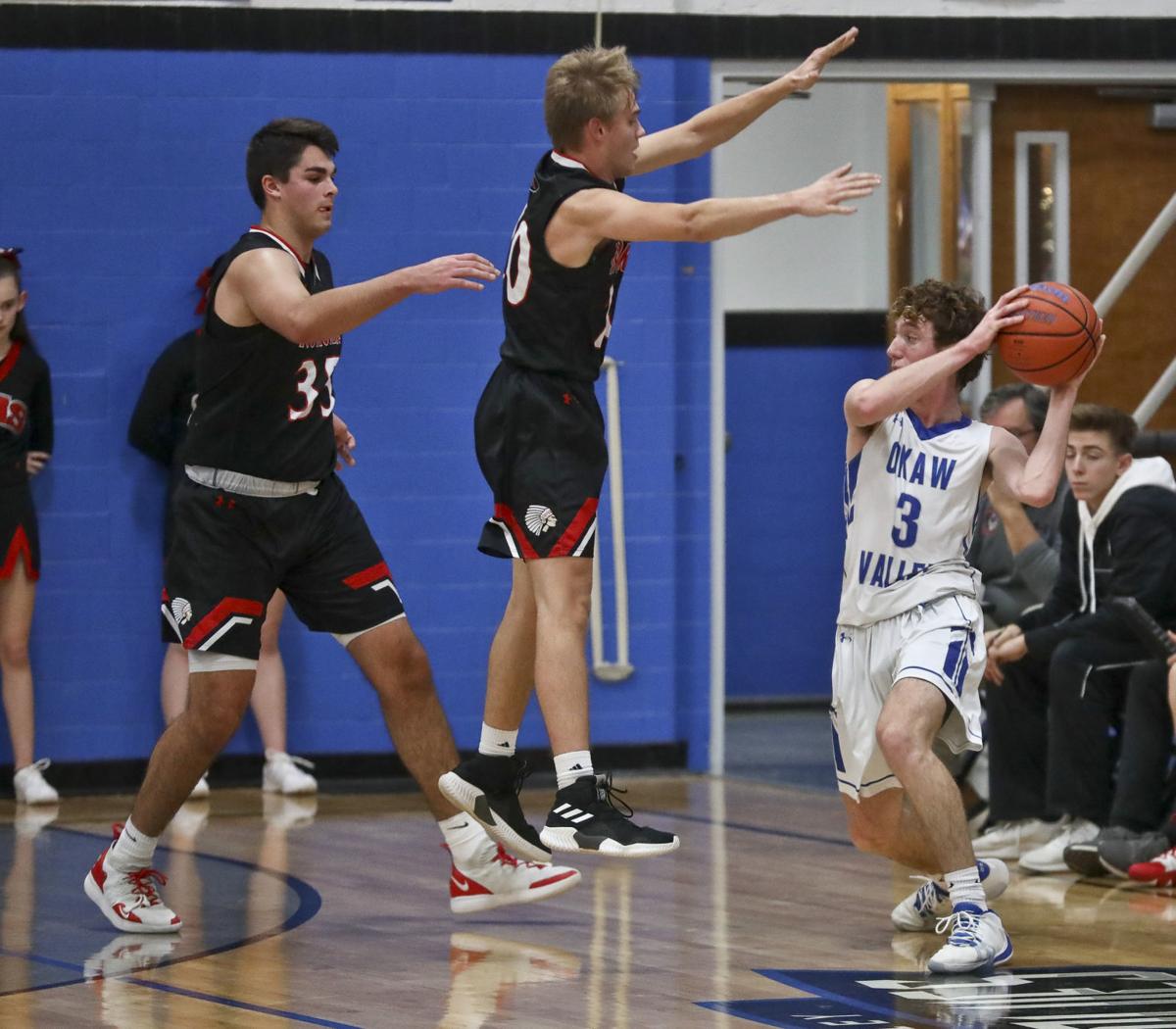 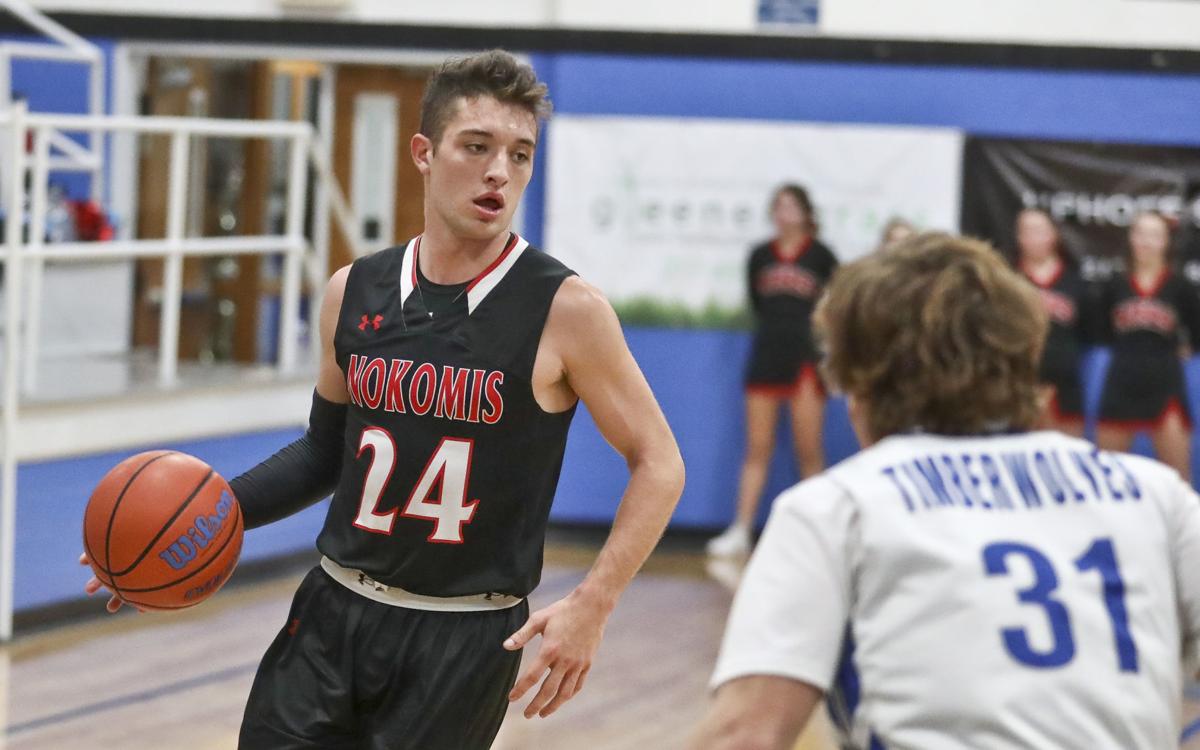 Nokomis Alex Tosetti (24) in the first quarter on Tuesday at Okaw Valley. More photos at www.herald-review.com 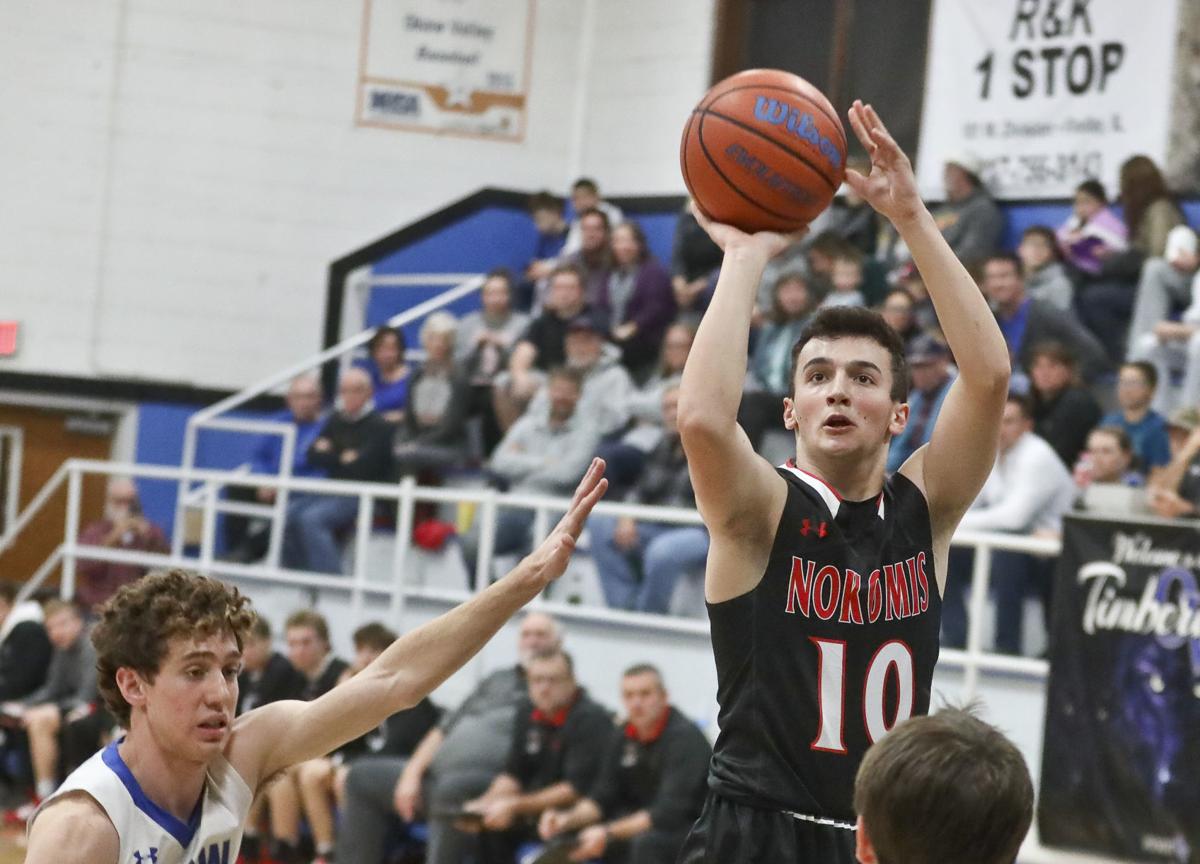 Nokomis's Evan Herpstreith (10) shoots against Okaw Valley in the first quarter on Tuesday at Okaw Valley. More photos at www.herald-review.com 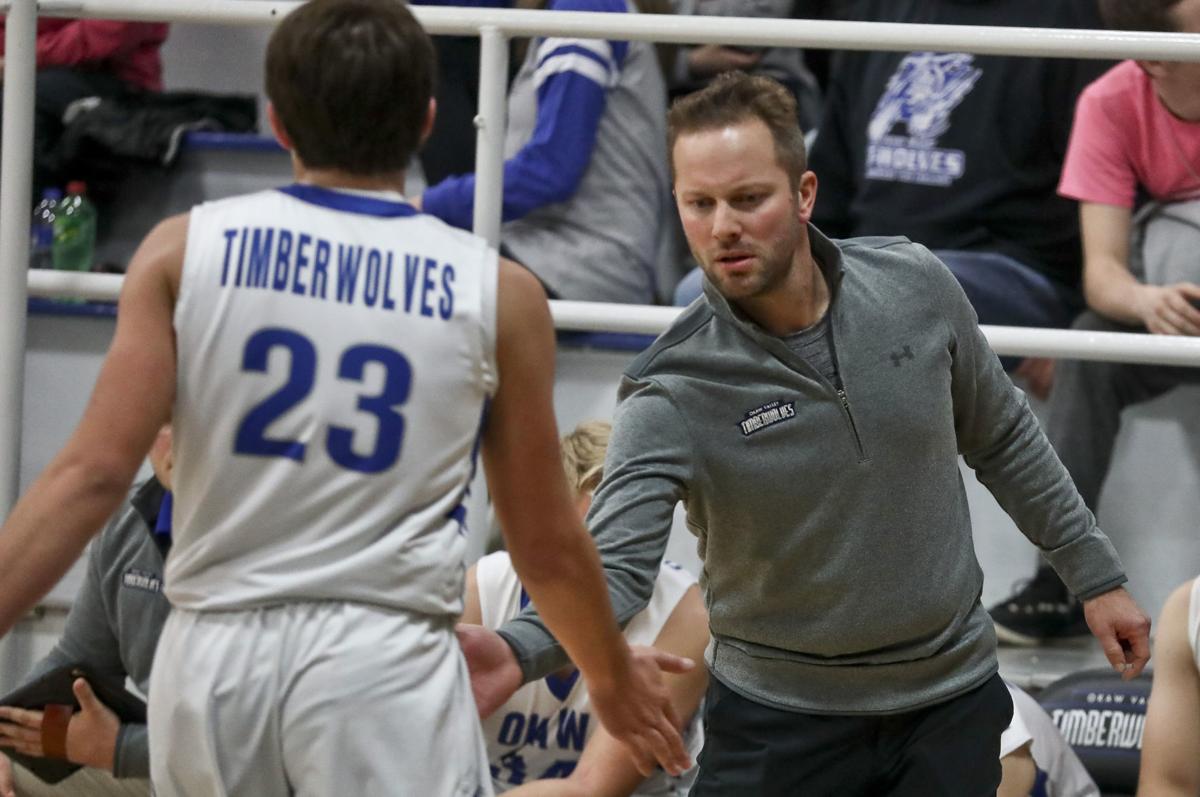 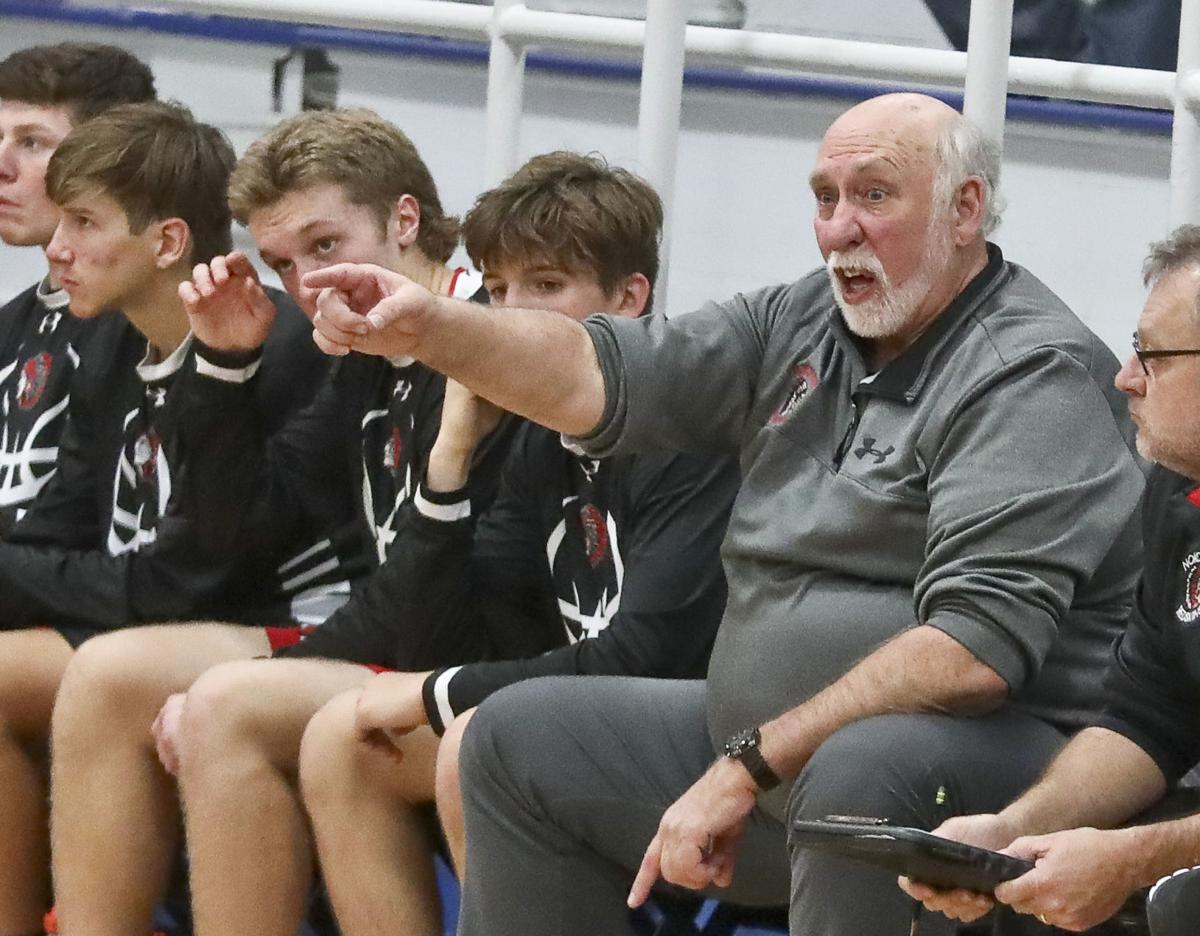 The Timberwolves led Casey-Westfield on Saturday only to watch the Warriors pick away at the lead on the way to a win. The Timberwolves led Dieterich on Friday, but watched that lead slip away. On Tuesday against Nokomis, Okaw Valley bucked the trend and held off Nokomis 65-63 to beat a team that has played for the Class 1A sectional championship in each of the last two years.

Timberwolves (2-2) senior Cameron Sharp dove in the passing lanes, cut through to the rim for easy layups and hit a pair of timely 3-pointers — a shot that wasn't always in his wheelhouse last season — in the fourth quarter to notch a big early-season win. Sharp finished with 24 points and Eli Hagerman finished with 20 points and hit six 3-pointers.

"I feel like it's a program changer, really," Sharp said. "I feel like it instills us with the confidence to go out there and know that we can do it."

Said Hagerman: "It's huge. We just barely lost against Casey. We could have beat them. Then to come out and get a top-10 game is just huge for us."

Okaw Valley led 34-26 at halftime and by seven points early in the third quarter before a 14-0 Nokomis (1-4) run ripped the lead away and threatened to give the Timberwolves another close loss early in the season to a team that's predicted to make a strong run in the postseason.

Sharp snapped the run with a spinning layup in the lane to climb back within five points before Nokomis answered back with a mid-range jumper from Evan Herpstreith and a dunk in transition from Carter Sabol, who finished with 24 points, nine rebounds to take a nine-point lead, 48-39, with 1 minute, 25 seconds left in the third quarter.

That was before Hagerman hit back-to-back 3-pointers to get back within three points to keep the game close. The latter 3-pointer came in transition on a pass from Camden Coleman.

"The crowd was electric," Hagerman said. "I set my feet, getting the shots up and getting good passes just got me going. "I made that first and that just set the tone for the rest of the game."

Okaw Valley got a little bit from everywhere. Tyson Montgomery hit a layup on a perfectly timed cut to the basket with 1:21 left in the game that gave the Timberwolves the lead for good, and the Timberwolves overcame a pair of missed free throws by Hagerman to stave off Nokomis after Kendall Knodle's last-second 3-pointer hit off the backboard.

"There are so many plays I can go back in my head that I'm just proud of our guys," Inman said. "They worked for it all preseason and they earned it tonight."

Sharp and Hagerman are the veterans of the group, but Okaw Valley is still a young team finding its way, and they took a big step in finding the road map in the home opener. Sophomore Tyson Montgomery was in the starting lineup and scored six points, Hagerman is a junior and sophomore Cale Roley got extended minutes.

In a matter of three days, the Timberwolves found a way to put away their late-game woes.

"Just learning from mistakes is what this team needs to do," Inman said. "We're still fairly young. We've got some experience but guys are still growing up. Just learn from mistakes and get the job done."

The Timberwolves play Shelbyville on Friday and Tuscola on Saturday, but they enter those games with confidence and a certain amount of swagger after knocking off a really good Nokomis team.

"We jumped out hot to start the year, but we've had struggles finishing," Sharp said, "but fighting back from the deficit was good."

Eisenhower point guard Cameron Rowe takes it as a point of pride that he led the team in charges last season.

7 things to watch this season in boys basketball 🏀

Basketball is unofficially on hold at Central A&M, at least for another week, until the Raiders play their Class 1A state football champio…

Quinn was already good enough as a freshman to be a driving force behind Tuscola's first boys basketball regional championship since 2008.

7 things to watch this season in girls basketball 🏀

The first boys and girls basketball polls of the season were released today, with Central A&M on top of the boys Class 1A rankings.

Okaw Valley's Cameron Sharp (3) and Eli Hagerman (15) celebrate after scoring against Nokomis in the first quarter on Tuesday at Okaw Valley.

Nokomis' Carter Sobal (35) is guarded by three Okaw Valley players in the first quarter on Tuesday at Okaw Valley. More photos at www.herald-review.com

Nokomis Alex Tosetti (24) in the first quarter on Tuesday at Okaw Valley. More photos at www.herald-review.com

Nokomis's Evan Herpstreith (10) shoots against Okaw Valley in the first quarter on Tuesday at Okaw Valley. More photos at www.herald-review.com