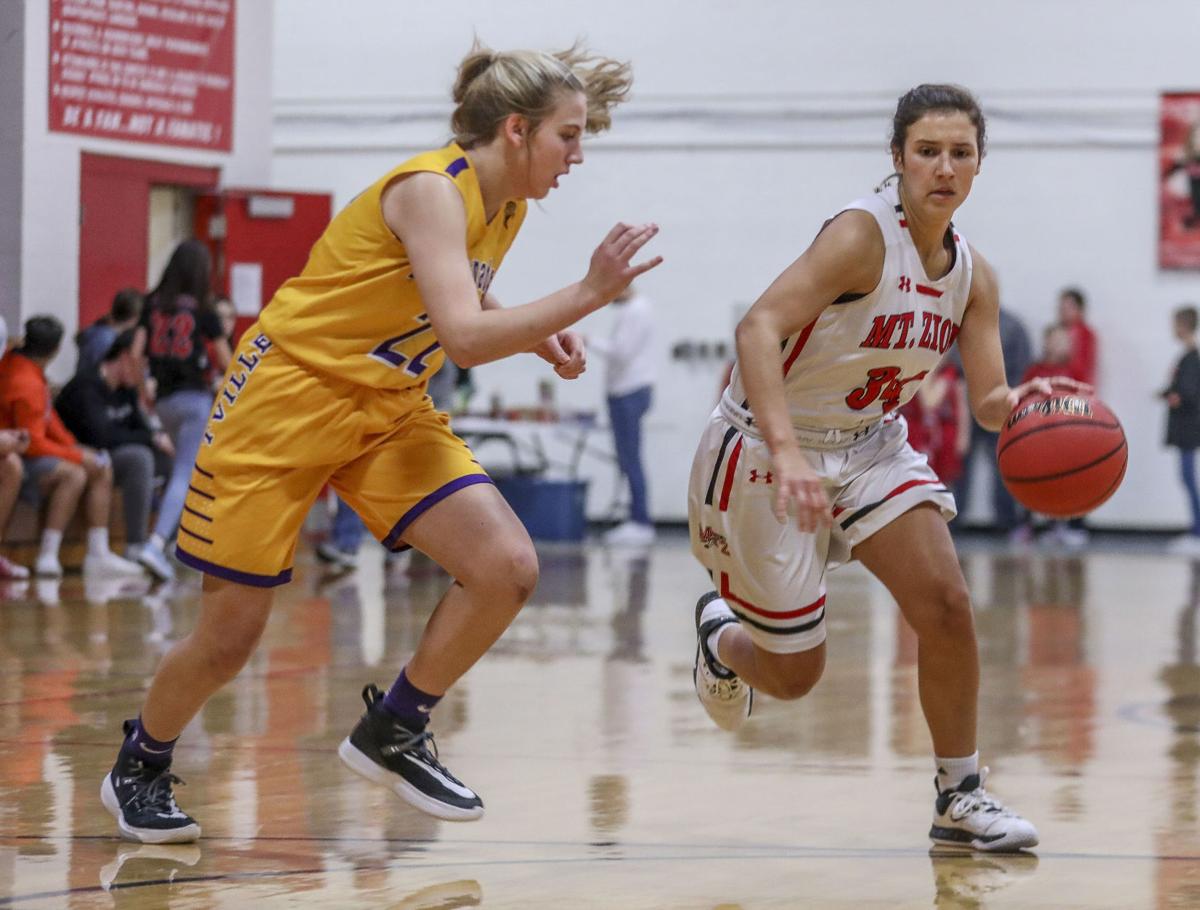 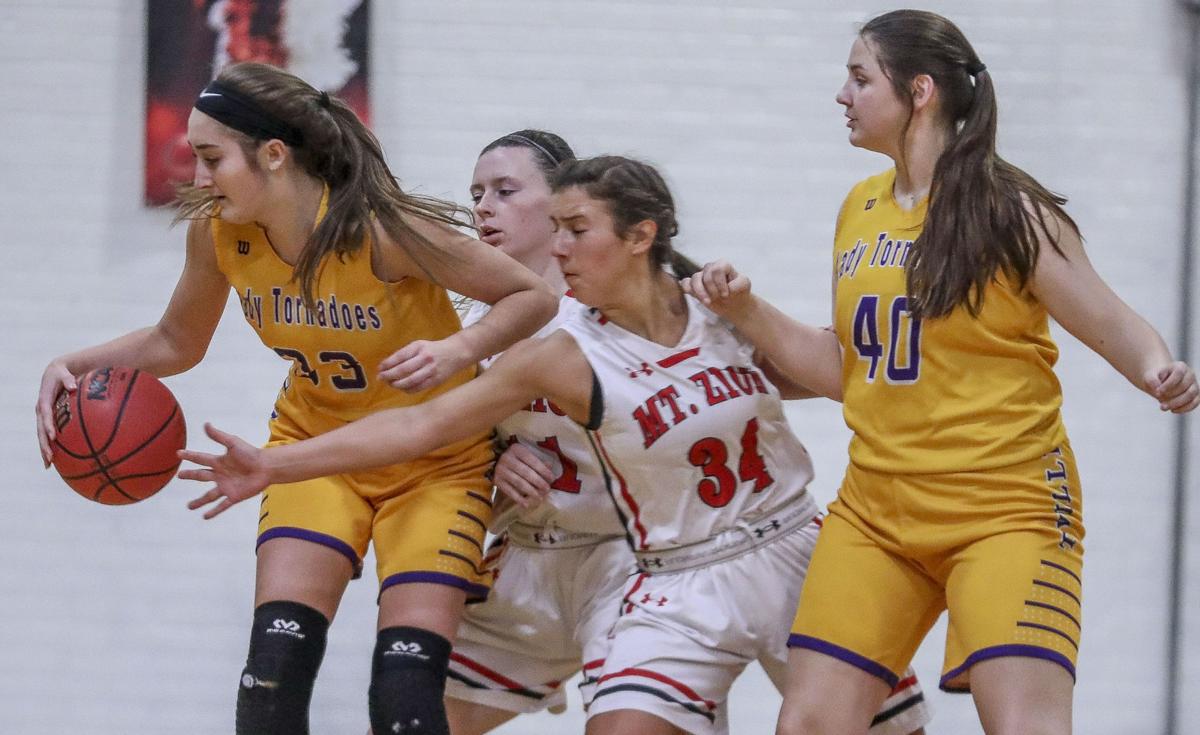 Mount Zion's Lainie Wolter (34) reaches for a ball against Taylorville's Haylee Donnan (33) in the second quarter at Mount Zion. More photos at www.herald-review.com

MOUNT ZION — At no point in Thursday's convincing win over Taylorville did Lainie Wolter look sped up or nervous on the court.

She dished passes to her open teammates, called plays on offense, jumped passing lanes on defense, confidently stepped into open shots and was in complete control over everything. That kind of confidence and know-how comes with 109 career basketball games, and counting, under her belt. Wolter, a senior on the Mount Zion girls basketball team, walked into the gym as a freshman and assumed the role of starting point guard.

Some of it, Mount Zion coach Shane Davis admitted, was born out of necessity. The Braves needed a true point guard who had the ball-handling ability and passing mind to get the offense rolling. Shane Davis' daughter, Alli Davis, had previously owned the position, but it wasn't her natural spot. It was, however, where Wolter excelled.

“Pretty much passing has always been my thing and ball handling," Wolter said. "I’ve never really been a true scorer. Ever since I was little I always had good hand-eye coordination and I was a point guard and I always could ball handle."

Wolter admitted she was nervous four years ago when Davis inserted her into the starting lineup. She said she remembers being in the Taylorville locker room as a freshman and vomiting because she was so nervous. But those games, and the ensuing games, have allowed her to grow, and to work some turnovers out of her system and assume control over the Braves' offense. That's exactly why, in the 21st game of her senior season, Wolter can't even pretend to show nerves.

“When Lainie came in, we needed a point guard, so necessity her freshman year, but from then on she grew with it," Davis said. "It’s been a joy and I’ve really enjoyed watching it."

She's been the face of consistency for the Braves, even in three consecutive losing seasons that preceded this year's 16-5 record. Wolter set the program's single-season assist record last year with 130, and is on pace to break her own record this year. Wolter's 86 steals this season has her in line to break Dottie Bradley's record of 107 in a single season, which was set in the 1997-98 season. The goal of breaking that record was set in the pre-season and leans on her quick-footed soccer background and point-guard instincts to help her read opposing players.

“I knew we had four other scorers on the team, and I knew if they get them the ball, they’re going to score," Wolter said. "I wasn’t really planning on being a leading scorer. Defense just means a lot to me. From soccer I’ve always been really quick and I just practice my footwork."

She was a good defender last season, Davis said, but has taken a big leap this year. Wolter had a season high of nine steals against Windsor/Stewardson-Strasburg on Dec. 27, had seven steals in a single game and several instances of at least five steals. Naturally, she's close to etching her name as another single-season record holder.

Wolter is also 24 points away from 1,000 in her career, which has only been done 10 other times in program history. She's averaging 13.6 points this year at the behest of Davis, who urges her to be more aggressive in her scoring to help create passing lanes. Prior to this season, she has never averaged more than 10 points in any of her three seasons, but she's comfortable with what she's doing on offense now and it's translating to shooting 49 percent from the field.

“It just made me more confident every single year, and watching the girls I’ve grown up with and played with have showed me how to improve my game on the court and what I need to do," Wolter said.

Wolter isn't the same player in January of her senior season that she was in Taylorville four years ago before her first game. Even if Davis played her out of necessity early in her career, he envisioned a career like this unfolding. Perhaps if he had another, older option four years ago he wouldn't have had to throw Wolter into the mix as early. Maybe she would have come off the bench and ended up winning the starting job mid-season. It's revisionist history. Four years later, though, she'll leave Mount Zion, in all likelihood, with two single-season records and as a 1,000 point scorer.

"I told her that I wish the scoring would have come a little bit earlier, but she’s just now gotten the idea that she has to score and look for her shot and set girls up. Where she could go, I didn’t know, but I thought she had the ability to really take off."

Monahan: Clark County rivalry brings out the best in Casey-Westfield

CASEY — During the long storied rivalry between Marshall and Casey-Westfield there have been upsets by both boys basketball teams. Friday was …

Mount Zion's Lainie Wolter (34) reaches for a ball against Taylorville's Haylee Donnan (33) in the second quarter at Mount Zion. More photos at www.herald-review.com