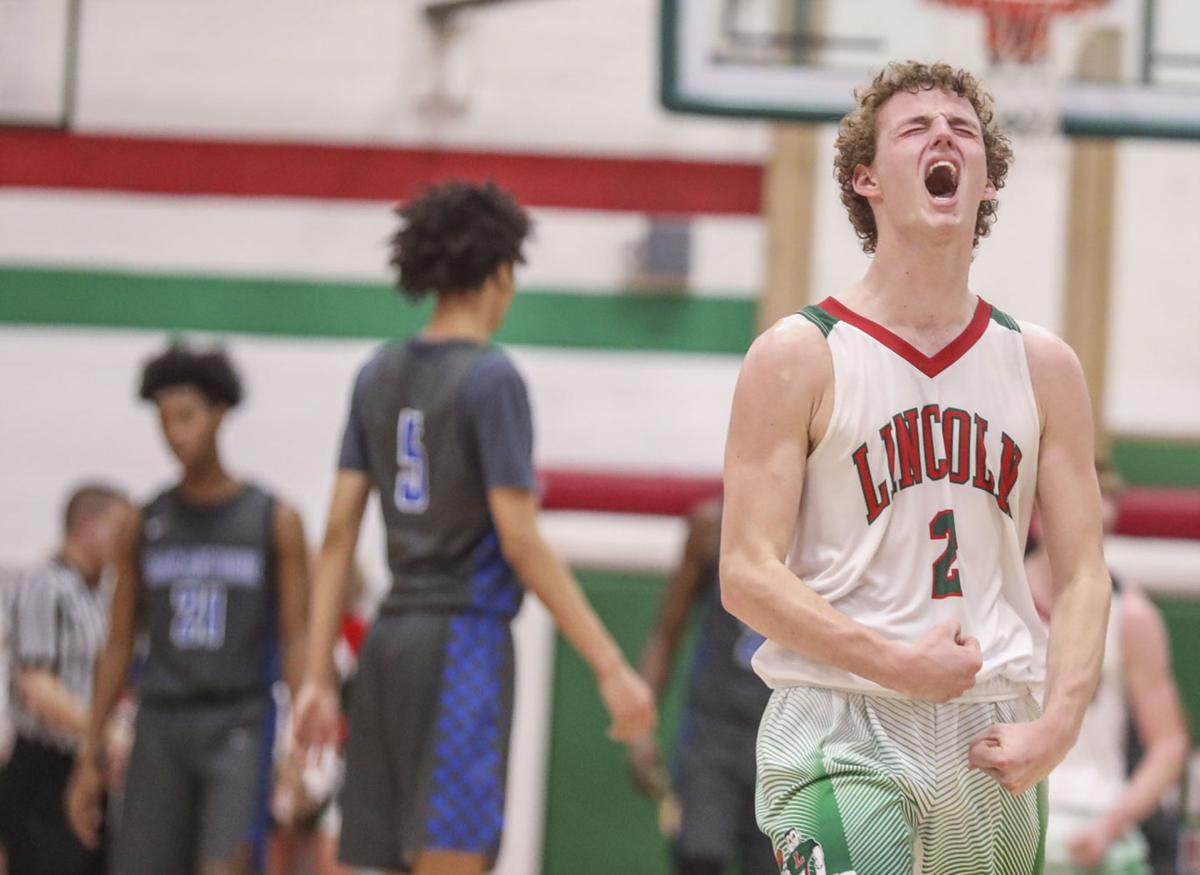 Lincoln's Kameron Whiteman (2) celebrates towards the end of the fourth quarter against MacArthur on Wednesday in the Class 3A Lincoln Sectional semifinals. More photos at www.herald-review.com 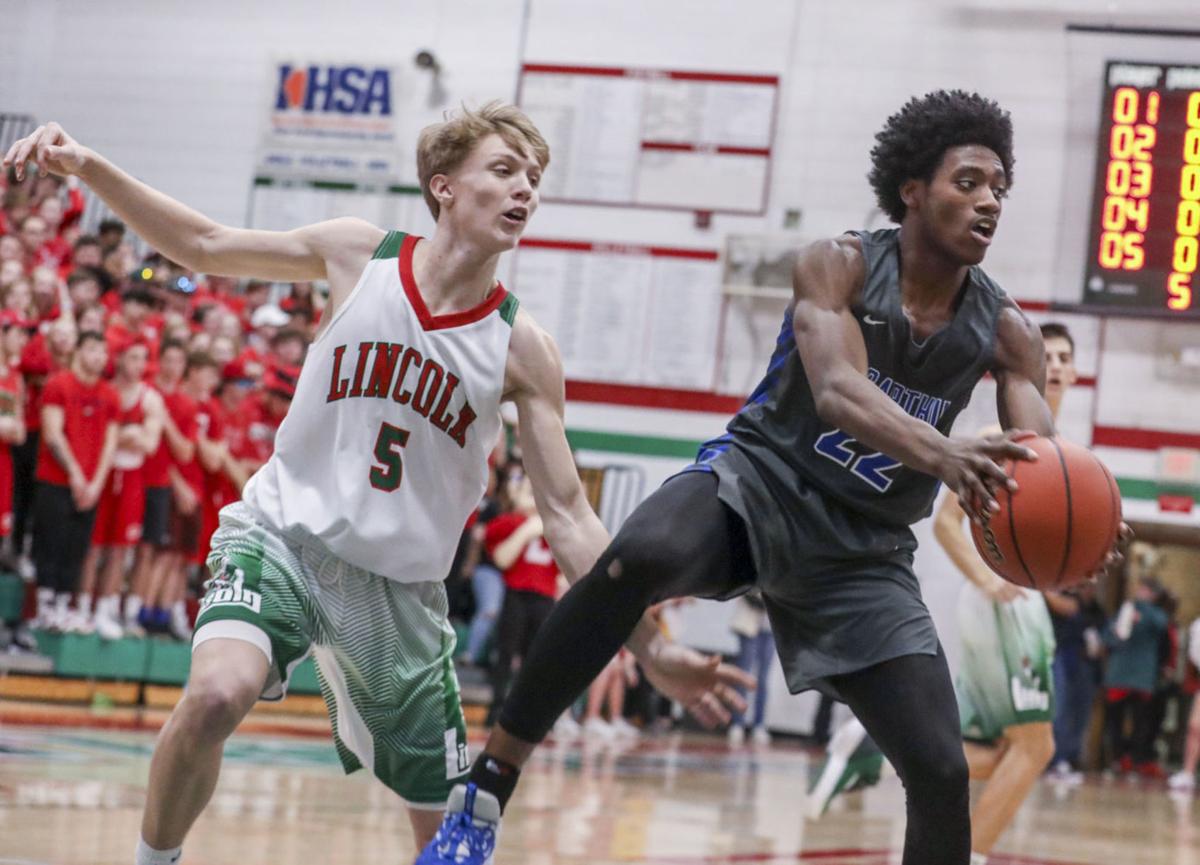 MacArthur's Nick Spannaus (22) is guarded closey by Lincoln's Kaden Froebe (5) in the first quarter on Wednesday. 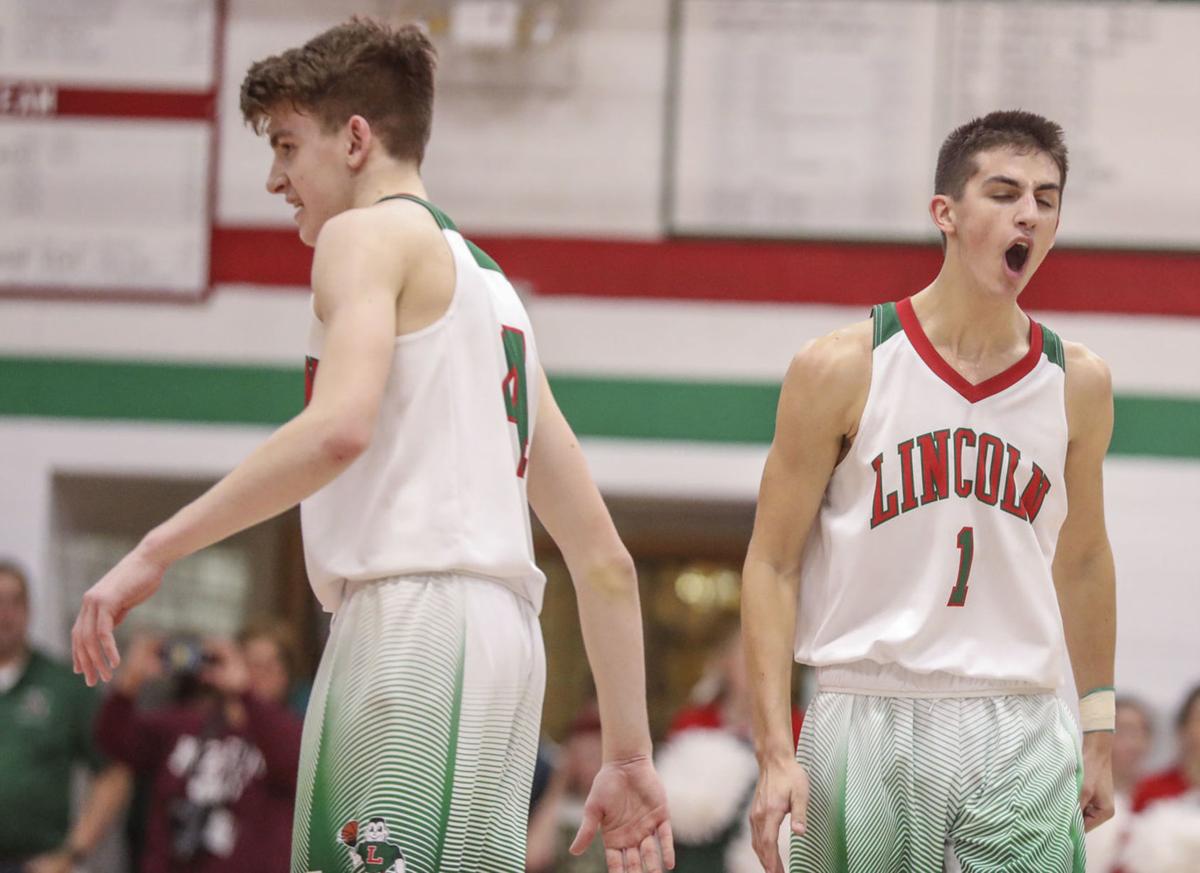 Lincoln's Will Ewald (1) and Landon Hullinger celebrate in the fourth quarter against MacArthur on Wednesday. 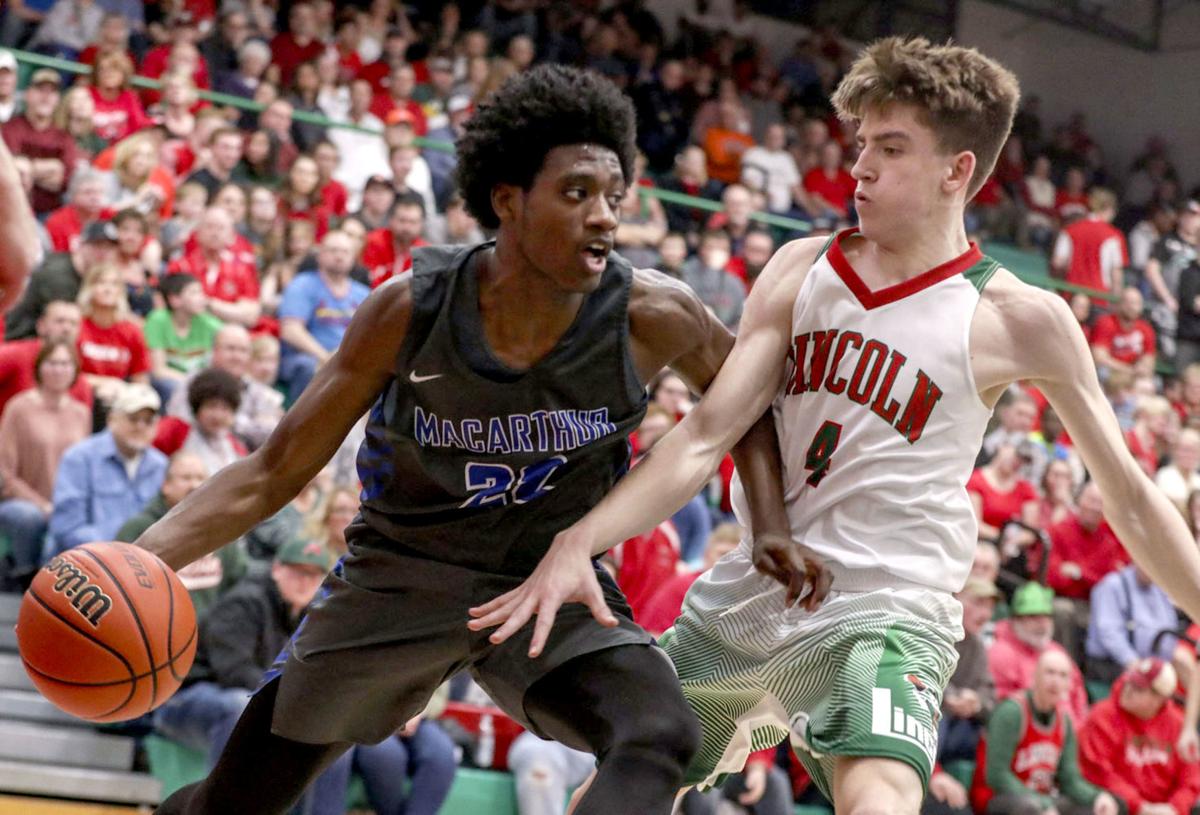 MacArthur's Nick Spannaus (22) is guarded by Lincoln's Landon Hullinger (4) in the third quarter on Wednesday. 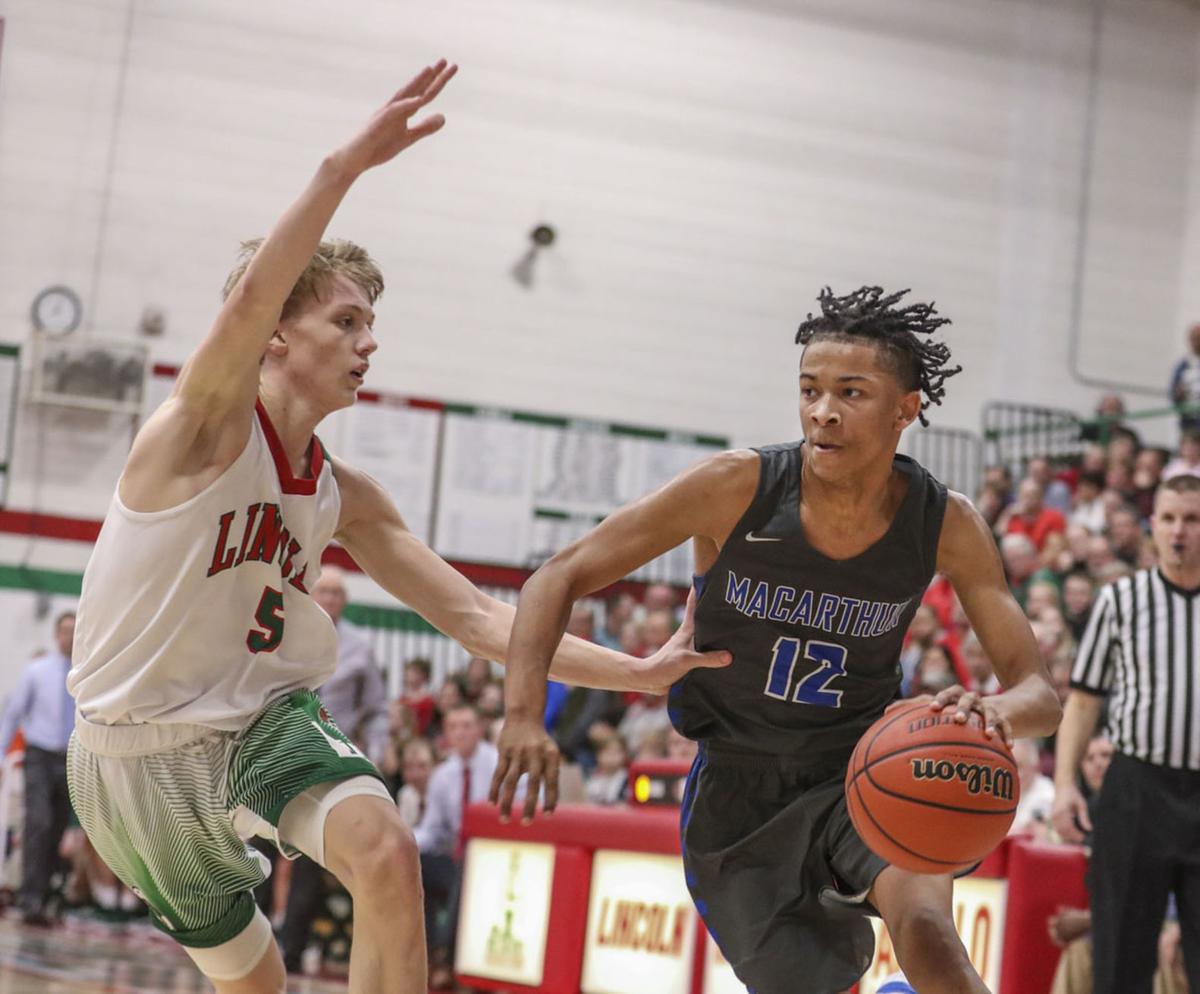 MacArthur's Qua Smith (12) heads to the basket past Lincoln's Kaden Froebe (5) in the third quarter on Wednesday. 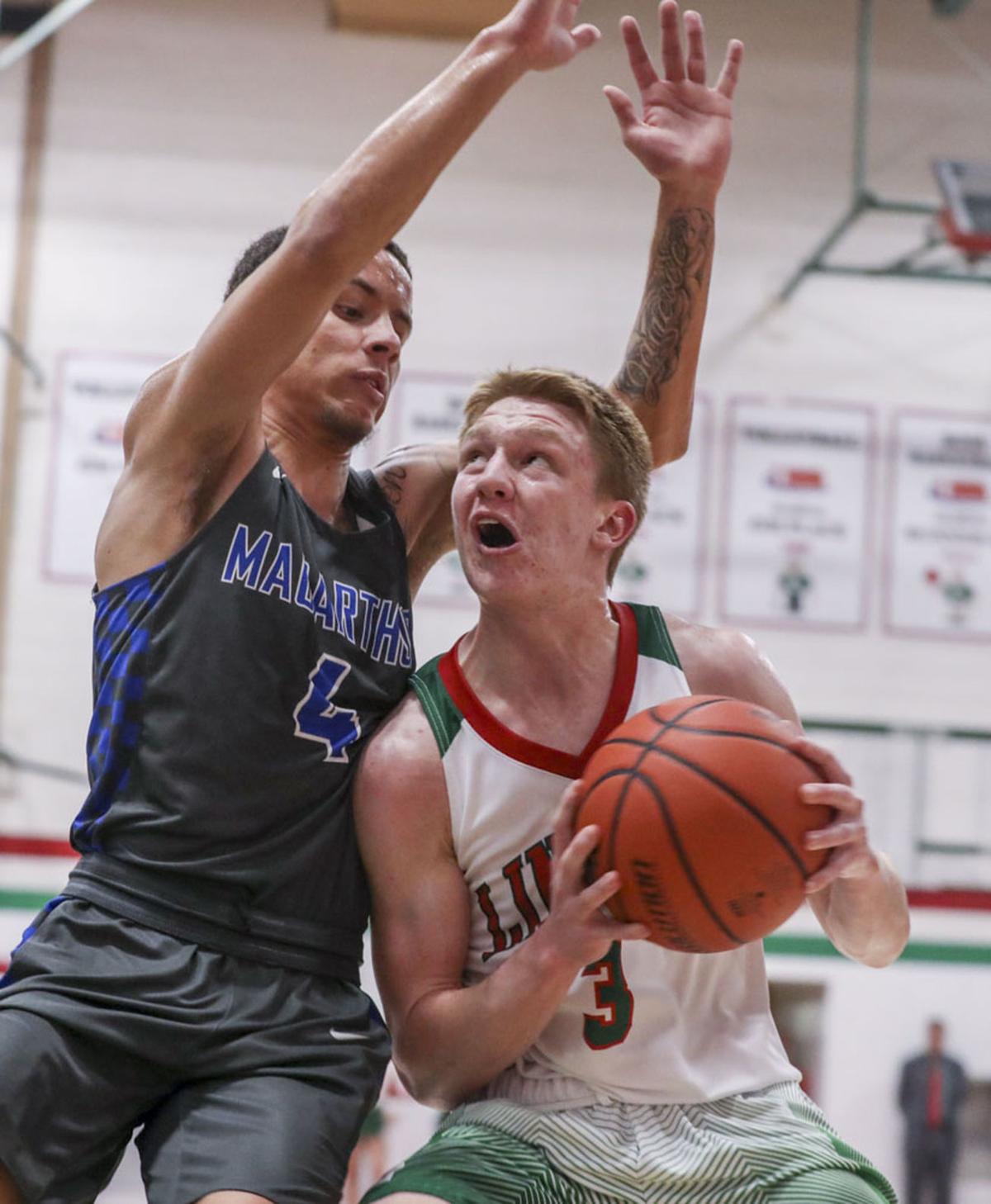 LINCOLN — Ron Ingram sat in the visitors locker room after the game with his hands pressed together trying to make sense of what just happened.

His MacArthur boys basketball did everything that it wanted to do except the one thing that is most critical when playing against a Neil Alexander-coached Lincoln team: Protect the ball.

The Generals did it well enough in the first half, only committing six turnovers. But in the second half, the Railers packed the paint, dared the Generals to shoot the ball and swatted at the ball every chance they could when MacArthur players drove into the paint.

Lincoln did what Lincoln does in the second half, finished the game by forcing 17 turnovers and beat MacArthur 60-41 on Wednesday in the Class 3A Lincoln Sectional semifinals. The Railers will play Springfield Lanphier at 7 p.m. Friday in the sectional championship.

"Everything they did today, we worked on it in practice: Their offense, the defense they run; they don't run many defenses, but we've been working on that," Ingram said. "We really thought we had a chance to come in here and disrupt everything they do and pull this game out. It didn't work out that way."

Ingram thought if MacArthur (16-17) could stay within 10 points, it would be fine, and the Generals did just that for most of the game. But Lincoln (32-2) used a 7-0 run to end the third quarter to take an 11-point lead. The Generals answered back with four straight before Lincoln put the finishing touches on a 14-4 run to ice the game with 2 minutes, 26 seconds left. Kaden Froebe led Lincoln with 18 points and had six during the final stretch to seal the game. Dylan Singleton and Landon Hullinger each had 12 points and Singleton added four steals. Will Ewald scored 10 for Lincoln.

Alexander wanted to force the Generals into jump shots, knowing well enough the problem with letting MacArthur get a head of steam to the rim. The Generals shot 26.1 percent in the second half and were 0-for-8 on 3-pointers.

"I think we were just boarding harder and packing it in a little more because they were getting to the basket really easy in the first half," Froebe said. "We wanted to pack it in and make them shoot a few more outside shots. That's pretty much what we did.

"In the first half, they sped us up and got up and down the floor. We knew we were going to do that coming in and they got us out of our game in the first half."

MacArthur got rebounds in the first half, particularly on the offensive end to get second-chance points and easy buckets against a traditionally stingy Lincoln defense. Nick Spannaus had a team-high six rebounds and 10 points for the Generals and Omarion Slaw finished with eight points, all in a first half where MacArthur never trailed by more than six points.

"We knew two things going in was their transition offense," Alexander said of the first half. "We had to have good transition defense and we didn't do that and we didn't rebound. I thought they had a lot of rebounds early in the game and that kept them in it.

"We got them out a little bit and they tried to dribble drive it and we got our hands on some dribbles and knocked the ball loose and we were able to pick up some loose balls."

Lincoln shot 5-of-22 on 3-pointers for the game, which were particularly effective in the first half. Lincoln's first three baskets were 3-pointers, but Ingram was prepared for that. They could live with 3-pointers, but not with the turnovers.

"The little mistakes that we made in turning the ball over; really that as it," Ingram said. "Our offense was working for us and we just threw the ball away and turned the ball over. Other than that our defense was doing OK; a couple of times we let them drive to the basket and we shouldn't have. We were willing to give up those 3s, but really we wanted to stop the driving to the basket and the penetration stuff, that hurt us more than the 3s they made."

Ingram didn't feel like the game had slipped away until that final push by Lincoln, which included seven points in less than 20 seconds.

"I really thought all through the game when they went on that run that if we at least kept it within 10 that we'd be OK," Ingram said. "It just didn't work out that way. Take nothing away from Lincoln. They're a well-coached team, they've got some really, really hard-playing ball players over there. It's a good program. They don't have a basketball team, they have a basketball program. They're at the place we're trying to get at, but we'll get there. We have the guys to get there with."

MacArthur forward Nick Spannaus was honest about his play in the first three quarters of the Generals' Class 3A Springfield Regional championship game against Springfield on Friday -- he was nervous and it disrupted his game.

Central A&M's bid to return to the state Final Four for the second consecutive season ended Tuesday night in Carbondale.

Here are the postseason basketball schedules for area teams.

Central A&M will play in its third straight super-sectional on Tuesday, but has faced its most difficult path in three years to get there.

Connor Heaton got his hands on a pass and started his break. His path to the rim was unimpeded and he knew exactly what to do. Heaton slowed down just enough, left his feet and hammered home a one-handed dunk with 31 seconds left on Friday.

Lincoln slips past Danville for Class 3A regional title

Lincoln scored the final four points to edge Danville, 60-56, in the Class 3A Bloomington Regional.

MATTOON — The third time was not the charm for Eisenhower against fellow Central State Eight Conference foe, Springfield Lanphier. Although fo…

When his shots aren't falling, R.J. Walker has a tendency to let his confidence begin to waver a bit.

Connor Heaton's last seven day have been filled with ice and Ibuprofen — not that any of that was obvious on the court.

WAGNER: What has been the best single-game high school performance this school year? Let's make a bracket.

We want to know which player in the H&R-coverage area has had the best single-game performance of the 2019-20 school year.

Lincoln's Kameron Whiteman (2) celebrates towards the end of the fourth quarter against MacArthur on Wednesday in the Class 3A Lincoln Sectional semifinals. More photos at www.herald-review.com

MacArthur's Nick Spannaus (22) is guarded closey by Lincoln's Kaden Froebe (5) in the first quarter on Wednesday.

Lincoln's Will Ewald (1) and Landon Hullinger celebrate in the fourth quarter against MacArthur on Wednesday.

MacArthur's Nick Spannaus (22) is guarded by Lincoln's Landon Hullinger (4) in the third quarter on Wednesday.

MacArthur's Qua Smith (12) heads to the basket past Lincoln's Kaden Froebe (5) in the third quarter on Wednesday.