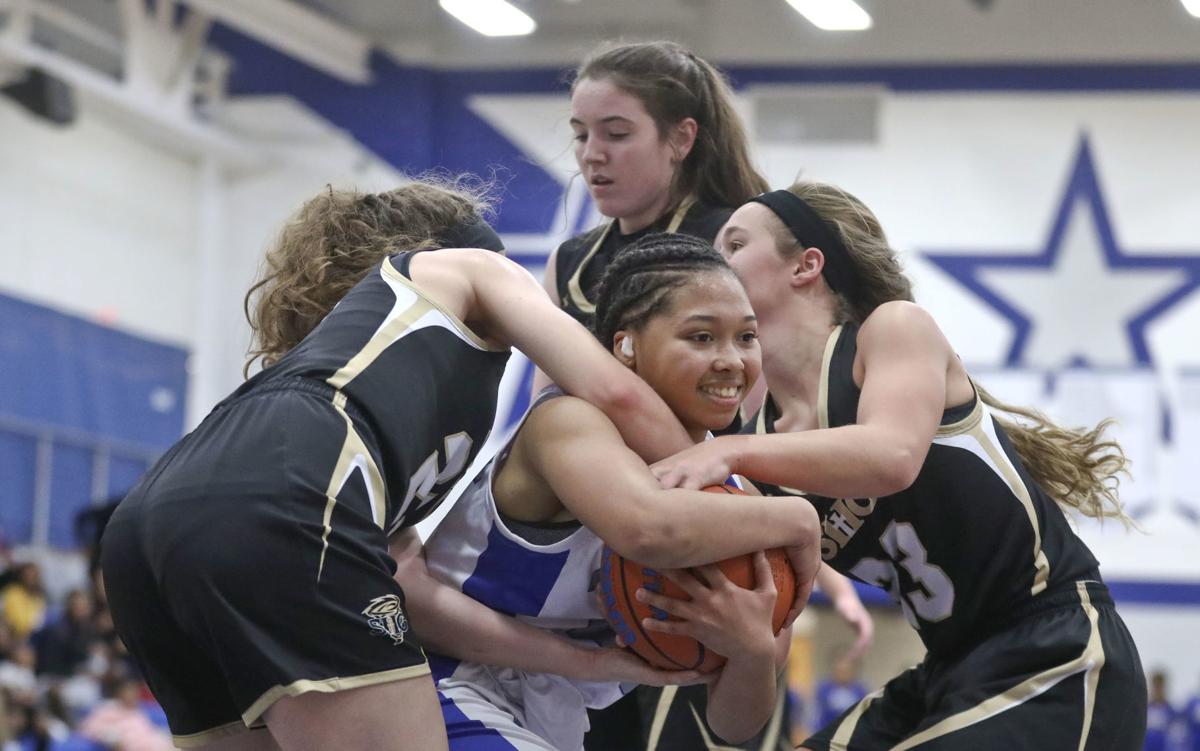 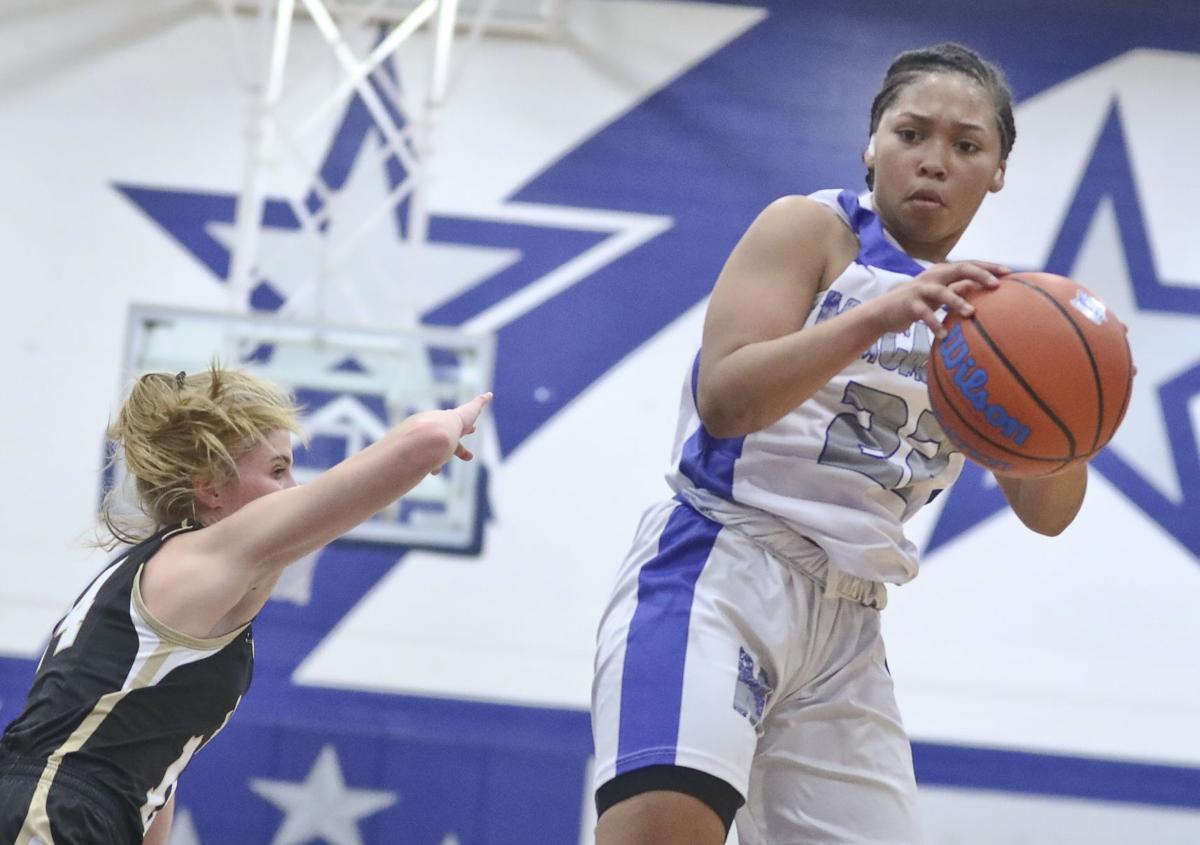 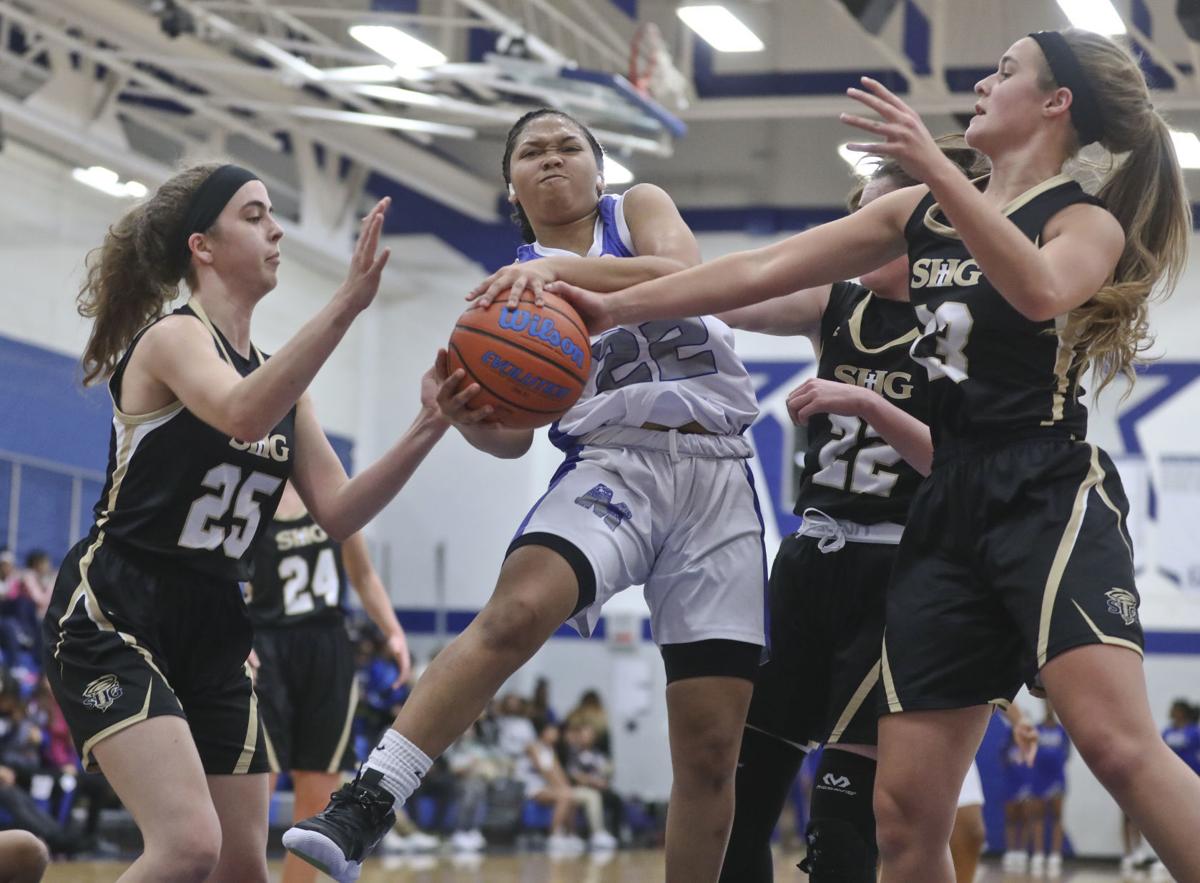 MacArthur's Jurnee Flournoy (22) heads in the basket against Sacred Heart-Griffin on Thursday at MacArthur. More photos at www.herald-review.com

DECATUR — Not every lesson is wrapped up and packaged in the same way. Some lessons come from tough losses, the extra pass that never happened or the open shot that didn't fall. Some come from wins, and the ability to beat two of a team's biggest rivals in a three-day span.

Some, in the case of MacArthur senior girls basketball Jurnee Flournoy, come from push-ups. Lots of them. Over and over until the point is hammered home.

When Flournoy transferred to MacArthur for her senior season after three years playing for Eisenhower, she had to find her niche in MacArthur coach Mike Williams' system. She'd followed the team from afar through its run to a Class 3A sectional semifinal last season, and knew that her role would eventually be defense and shooting to help propel the Generals (7-2) to their ultimate goal of Redbird Arena.

“I knew we had a lot of ball handling, and I knew I was going to come in and be another shooter to penetrate and kick out," Flournoy said. "Basically just play my role."

Problem was, she had a bit of a history of reach-in fouls, which Williams wanted to snap as soon as possible.

The trade-off was simple: Reach in during practice or a game and get anywhere from 10 to 20 push-ups. Flournoy said there's been growth in that part of her game and the fouls have decreased.

“So far I’ve only had about three fouls a game," Flournoy said. "They like to call me a hacker, but I think I’m doing better."

The reality is, the Generals are better off when Flournoy is on the floor. She hasn't quite hit her peak yet, but her intellect, shooting and defense make MacArthur better. She's averaging 6.0 points and 2.6 rebounds for the Generals. But Williams and his team have seen the best of Flournoy when they played against her at Eisenhower.

“Right now she’s being Tito Jackson," Williams said. "I need her to be Michael Jackson. I’ve been on her butt to be aggressive and move the ball.

An aggressive Flournoy unlocks the path to a deep postseason run. These Generals have seen it for years. Junior guard Taya Davis didn't exactly love playing against Flournoy when she was still at Eisenhower. Flournoy is too good a shooter for Davis to enjoy playing against her.

This current setup is a much-preferred outcome.

“She helps a lot," Davis said. "She bought her defense. She hasn’t really come out to be a scoring guard like she was at Eisenhower, but her defense, she’s been bringing a lot; even though she fouls a lot.

“Once she start getting into her composure with us, we’re going to be real unstoppable."

Flournoy is a steadying presence in her fourth year on varsity basketball. She's seen all there is to see in the Central State Eight Conference and can be the backbone of an experienced, yet still fairly young team trying to find the perfect lines on the road map through the season and postseason.

Flournoy created an easement from the past to the future.

“It helps a lot," junior Quincinia Jackson said. "When Jayda and them left, we needed somebody to fill those shoes. Jurnee and Ariana (Riley) stepped up."

Flournoy made the decision before last school year ended to transfer to MacArthur for her senior season. She didn't entirely bargain for all the push-ups, but it's been a seamless marriage.

“I knew from the jump that we were going to be great, and so far we’ve been living up to that expectation," Flournoy said.

Central A&M is back to defend its title at the 93rd edition of the Macon County Tournament, which begins Monday at Meridian.

Okaw Valley senior Cameron Sharp is settled into his role on the court and is shooting 3-pointers with confidence.

The first boys and girls basketball polls of the season were released today, with Central A&M on top of the boys Class 1A rankings.

Eisenhower point guard Cameron Rowe takes it as a point of pride that he led the team in charges last season.

In the scorebook Tuesday, Reed's night wasn't all that productive. Four points on 1-of-7 shooting. That, though, isn't nearly all of Reed's impact on the game.

St. Teresa and Central A&M won Thursday in their Macon County Tournament games, setting up a Bulldogs vs. Raiders championship on Friday that is a rematch of the 2017 tournament finals.

MacArthur's Jurnee Flournoy (22) heads in the basket against Sacred Heart-Griffin on Thursday at MacArthur. More photos at www.herald-review.com