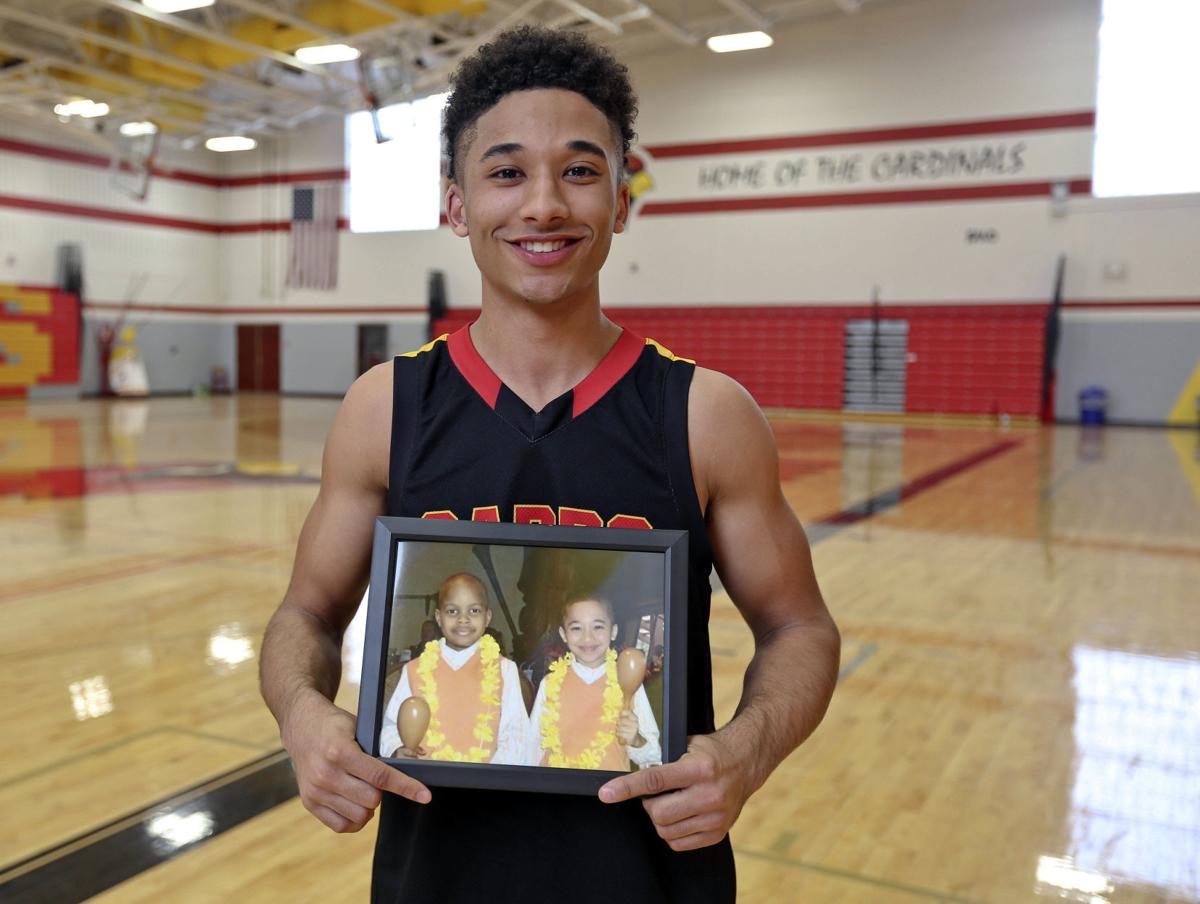 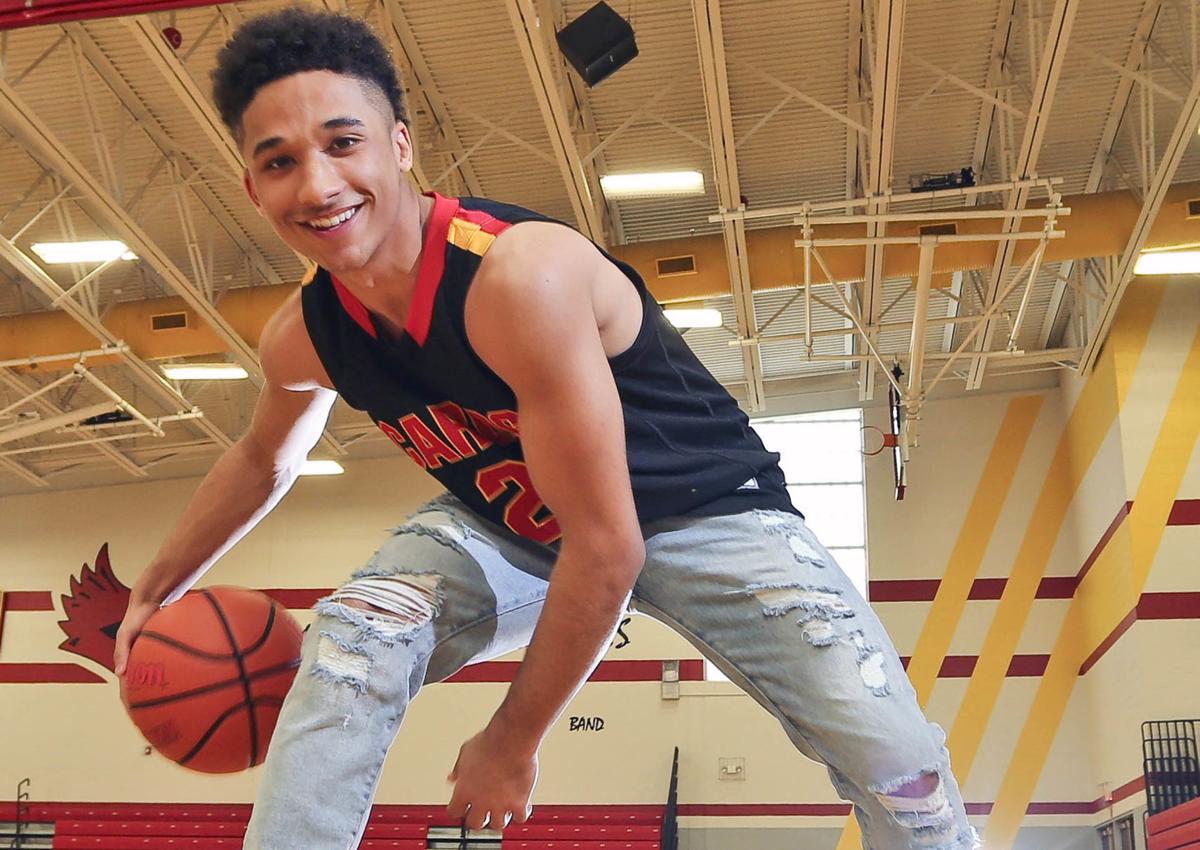 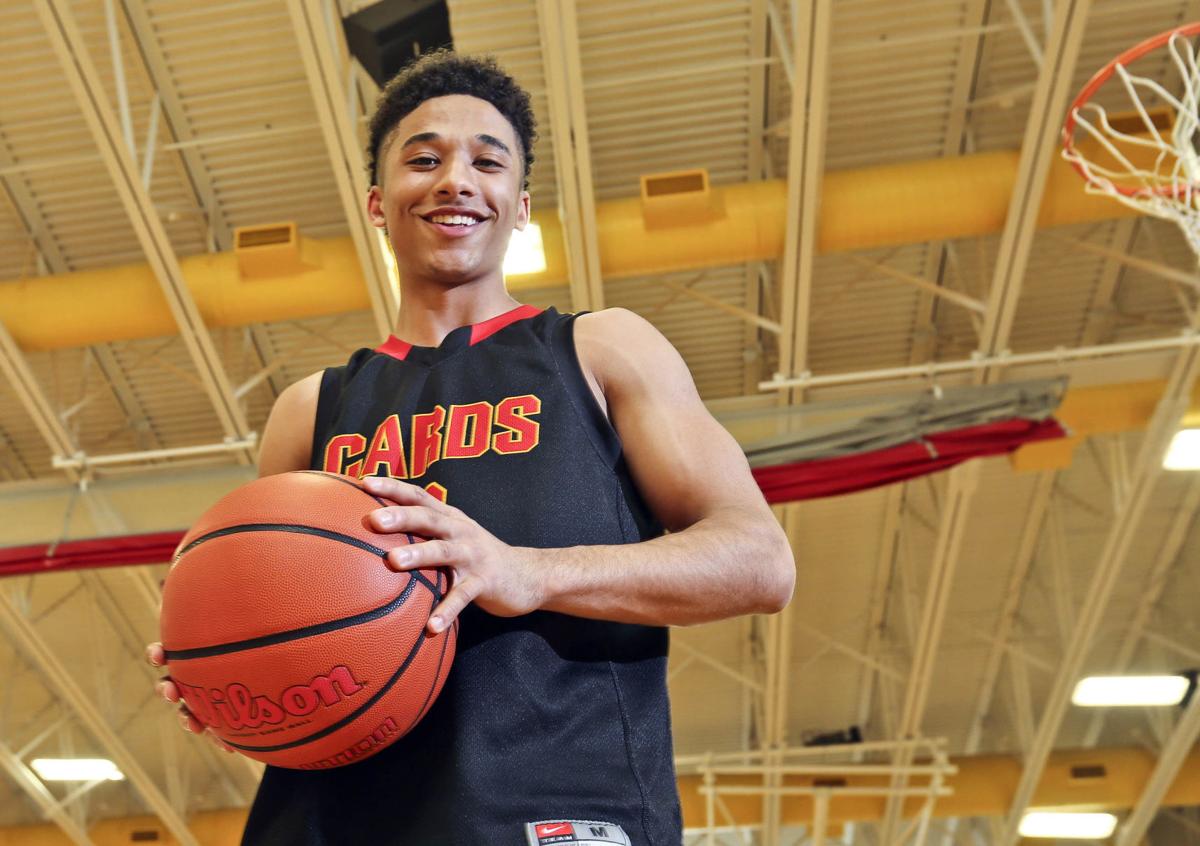 Meanwhile, Ingram sat at a table in a gray-hooded sweatshirt with "Millikin" spelled across his chest in blue, block letters and a pair of faded blue jeans. He was there to announce his intentions to play basketball next season at Millikin, where he received the Presidential Scholarship that includes full tuition for academic excellence, after wrapping up a career as the fourth all-time leading scorer in Warrensburg history.

He was hardly alone on this day, but he's never alone.

After the celebration and photos, Ingram sat in head basketball coach Vic Binkley's office in a black chair and rolled a basketball around with his left foot after his younger brother, J.R., delivered it to him.

Ingram shared everything — a deep dive into the 2009 death of his brother, Jaylon Ingram, after a two-year battle with cancer that inspired Jarius to be the face of the Cardinals' basketball team. As a senior, Jarius led the Warrensburg in scoring on all but two occasions en route to 23.7 points per game, including a season-high of 40 points, and is the Herald & Review Macon County boys basketball Player of the Year — the first Cardinal to win the award since Jacob Taylor in 2011.

“Today feels like a pinnacle of all that hard work," Jarius said. "It’s almost like (Jaylon) saying: All that hard work you’ve done for both of us, it pays off — literally and figuratively. In my mind, figuratively, I know I’m pleasing my brother and also the money aspect and being able to play college basketball."

Binkley, in his 31 years at Warrensburg, hasn't seen a season like Jarius', where his senior guard had be on his best game every single night. But not even Binkley knew where Ingram's motivation came from. He has coached Ingram for four years and only learned about Jaylon's death more than a month after Jarius' senior season ended. Jarius doesn't feel the need to talk about it. It's a personal motivator, he said, and there's no craving for validation from anyone else.

What Binkley did realize, though, was that when the decks are stacked against Jarius, he finds a way to kick the stack down and charge forward.

“It seems like in the second half he fired up," Binkley said. "When we really needed it the most, he would find a way."

Jarius' teammates didn't even know why he wore No. 2 on his jersey. It's a tradition that dates back to a trip to Disney World in Orlando, Fla., where he and Jaylon got "Thing 1" and "Thing 2" shirts in reference to the Doctor Seuss book, "The Cat in the Hat."

"Every time I put on my jersey, I think that I’m not just doing it for my singular self," he said. "It’s for both of us."

Jaylon and Jarius were as close to twins as possible without being born at the same time. They were born three weeks apart from each other — same father, different mother. Jaylon was older, just a hair taller and probably slightly better at basketball than Jarius. They did everything together — best friends.

When Jaylon was six years old he was diagnosed with Rhabdomyosarcoma, a form of cancer that begins in the muscles attached that are attached to bones. He underwent chemotherapy and fought for two years. At one point, Jarius recalled, he thought Jaylon had beaten the disease.

But when Jarius' father, Jeremy, picked him up from daycare on June 22, 2009, he told Jarius that Jaylon had died in the hospital at the age of 8.

“I didn’t quite understand or cope with it that well," Jarius said. "I wasn’t hysterical, but I was like, ‘Man. Basically my twin ... I’m not going to be able to grow up with him.’ I always think nowadays that would be so cool. We’d both be graduating now. It would be awesome. He’d be a best friend all the time."

After Jeremy delivered the news, the two swung through Krekel's, went to the lake and talked.

“He basically summed up that it’s always been me and Jaylon and since he’s not here now, 'You know what Jaylon would have wanted,'" Jarius said. "I put in twice the effort that I do in almost anything. I’m not just doing it for myself. I’m doing it for Jaylon and what he could have done. He didn’t get that chance and I do get that chance."

As Jeremy watched his son fight through the loss of his brother, he offered a piece of advice.

“When he passed, I actually told him to use that as a stepping stone for him to keep his focus and stay busy considering we had such a loss to our family," Jeremy said.

Even still, Jarius doesn't like to dwell on his brother's death. The times he does start to go down those wormholes, he flips the script. It wasn't so much that he only had eight years with Jaylon, but rather that he did have eight years and nothing but fond memories that included intense games of driveway basketball.

"Every memory of my brother is nothing but fun," Jarius said. "We were just young and having fun. It’s usually never sad, it’s just more of: I wish he was here. At the same time, I’m thankful for the time I did have with my brother."

Jarius used his brother's death to turn basketball from a fleeting hobby to a passion. Ten years after his dad broke the news to him in the car, Jarius can reflect that Jaylon's death is what eventually helped craft him into a college hooper. When Jarius was younger, basketball wasn't his best sport. In YMCA games, he scored so infrequently the he celebrated each basket as if it were a parade headed down a town's main street, sprinting up and down the court in elation. A "grand old celebration," he recalled.

But in the years since, he gravitated to the game. As a senior, he took a Warrensburg team that lost Ingram's right-hand man, Joe Gustafson, after he transferred to Springfield Sacred Heart-Griffin for his senior year, and led them to 18 wins and came an arm's length of a regional championship.

Again, Jarius Ingram can't be alone: In body or in mind.

“My team, we believed," he said. "It was one man down, the next man stepped up. In parallel, I’m not alone anytime I put my jersey on. It’s me and Jaylon."

Basketball is just part of Jarius Ingram. He's actively involved in the community and in his church. He takes books to basketball games and pushes the boundaries of being on time to home games so he can dedicate his time elsewhere. He's the class valedictorian, owns the school record for points, assists and 3-pointers in a season and is well known around Warrensburg and Decatur.

None of it is by chance.

“I’m not 100 percent sure what Jaylon would have done, but if I throw myself around everywhere, I’m sure I can’t disappoint him," Jarius said.

Before he walked out of Binkley's office and over to a track practice that he would surely be late for, he was posed with a question.

"Do you think Jaylon would be proud of you?"

With a scoff and his patented smile Ingram replied, "Yeah. 100 percent."

MONTICELLO — Monticello had Warrensburg-Latham on the ropes late in the fourth quarter, but the Cardinals came roaring back to life.

WARRENSBURG — Most basketball minds say that the mid-range shot is dying. It's not as automatic as a layup and doesn't come with as much rewar…

MAROA — Central A&M is on a mission to make some history at the Macon County Tournament.

DECATUR — There are a few certainties that Denita Mathews knows about her grandson, MyShaun Dozier.

Amir Brummett has always considered quarterback to be his natural position.

Look to the Chargers and Seahawks to make the playoffs

Look to the Chargers and Seahawks to make the playoffs

US Open: Can Phil Mickelson make the cut after A +4 Round 1

US Open: Can Phil Mickelson make the cut after A +4 Round 1