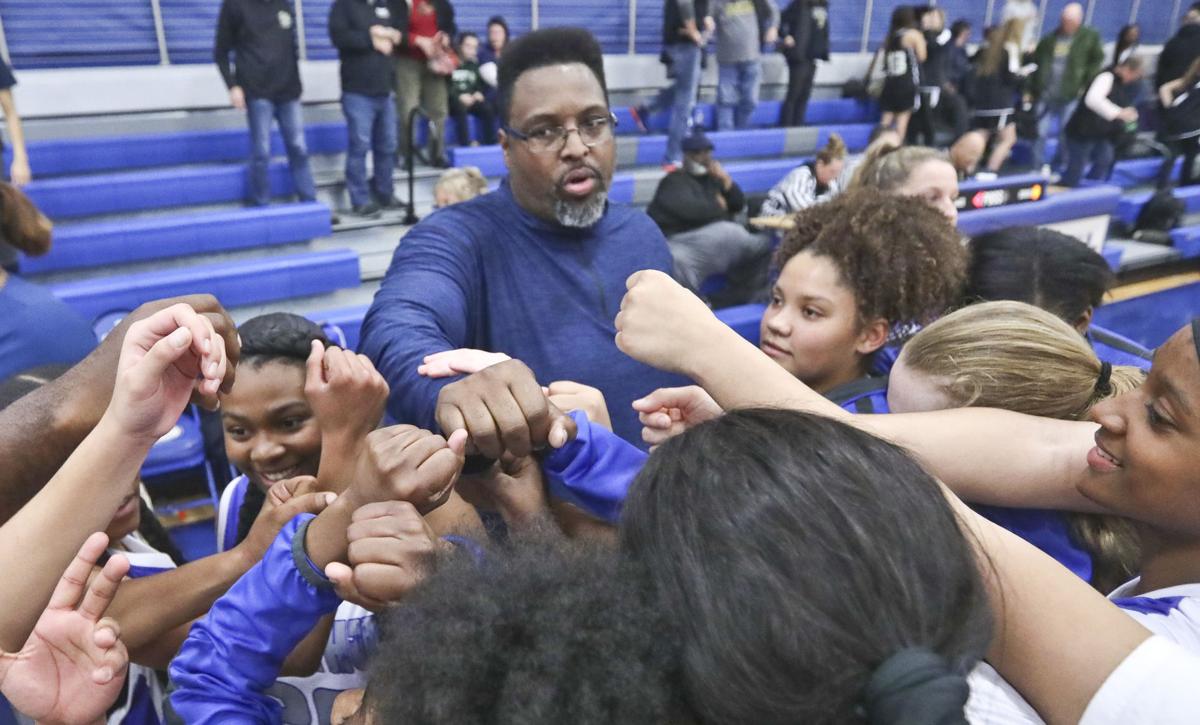 Mike Williams, head coach of the MacArthur High School girls basketball team, was passionate about the success of his players on and off the court. Williams, who coached the team to two regional titles during his three years at the school, died Wednesday morning. 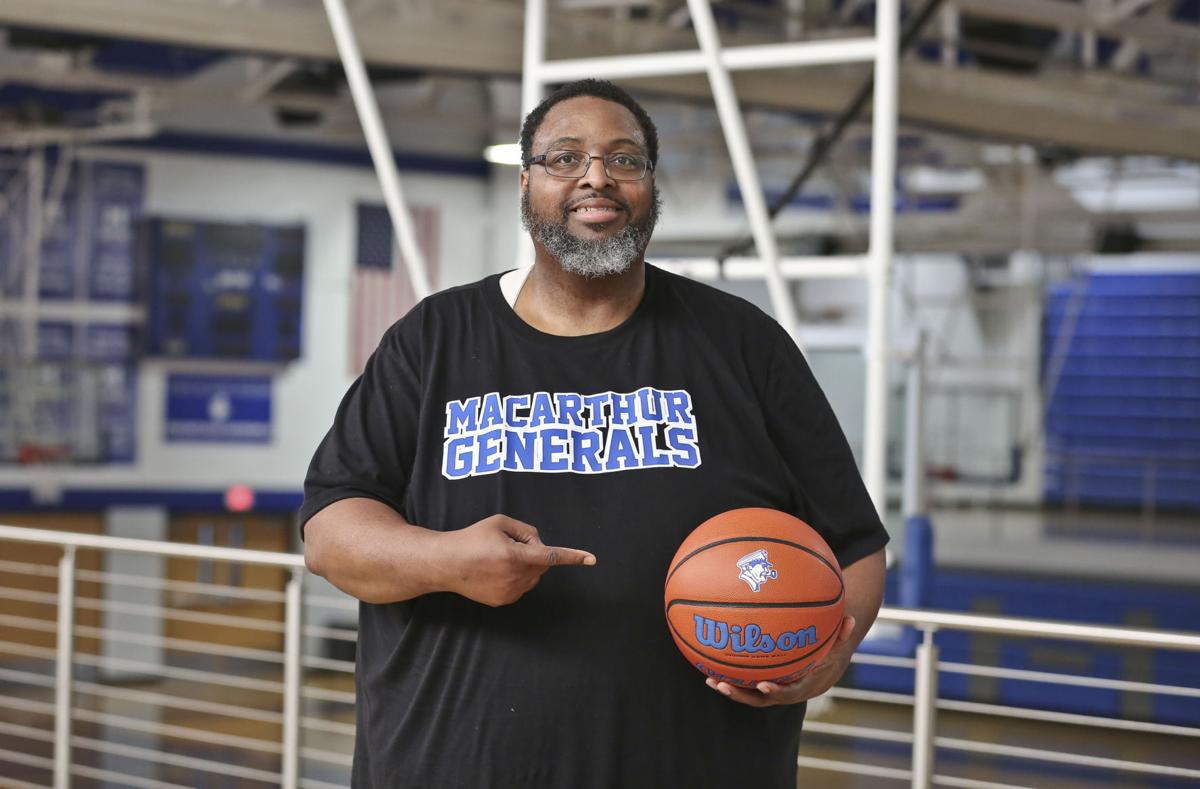 DECATUR — On Tuesday afternoon, MacArthur senior Taya Davis heard from a Division I head coach in the Big East.

She sent a message to a group chat that included her high school basketball coach, Mike Williams.

"What? Are you serious? Let's go!!!" Williams wrote back.

Williams championed each of his players for the opportunity to play in college. That was his passion. The success of his players was greater than his own success as a coach.

The 52-year-old Williams had been sick, friends said. But his response to Davis didn’t show anything but the enthusiastic support his players came to expect from their coach.

“He meant a lot," Davis said. "He wanted all of his kids to go (Division I). He was the coach that had faith in you more than you did."

Williams, better known as Dubbs for his outgoing personality and energy, had been the girls basketball coach for the Generals for three seasons. During his time on the bench he earned two Herald & Review Macon County Girls Basketball Coach of the Year awards and led the team to two regional championships.

Crutcher said he thought Williams was feeling better, but hasn't talked to the family to confirm what happened.

We Love You Dubb! You were great for our community, our school, and our kids. You were a father figure to all of kids, we are going to miss you. I could say a lot more, but I am just lost for words right now.Our prayers go out to his wife, daughter, family and friends!RIP Dubb pic.twitter.com/4o3IvJtqdN

Williams had a profound impact in the community, particularly around the girls basketball community.

"He was out there for the kids," Crutcher said. "He wanted to see the kids succeed, he wanted to get them in college. He taught them life lessons. He taught them the game of basketball and discipline. A lot of people kind of looked at him and say he was too hard on the girls and he needed to ease up on them and all that, but he was a father figure to all these girls. They looked up to him. He changed the culture of basketball around here at MacArthur."

The Generals are expected to be contenders to advance to the state final four in girls basketball after two straight regional championships. Williams longed to see that kind of success from the team.

TUPPER: With his wife at his side, Lou Henson's legacy stretches well beyond the court

'Better than nothing': Opinions differ on the IHSA modified schedule for the 2020-21 school year

“He was loved a lot as everybody can see," Davis said. "It’s just hard for everybody. We want to get to state for him next year because we know how bad he wanted that."

Williams' voice bellowed through the gym only to be met on the other end with an arm around a player and a word. He coached his players to reach the best of their ability. They all knew it.

“When he’s mad, we all understand, but other than that Dubb has always been a good person towards us, a good coach," Davis said. "He’s always been there for us. He’s our family."

Assistant coach and former Eisenhower girls basketball coach Sean Flaherty posted on Facebook that Williams called him to help volunteer in the summer and that blossomed into Flaherty joining the coaching staff and building a friendship.

“I’ve been coaching sports since 1996 in high school, and I truly mean this, I’ve never seen a man more dedicated towards the community and putting the community first for the betterment of girls or boys. He coached boys in the summer, too," Flaherty said. "He put in the extra hours opening the gym on Sundays, seven days a week, any time. He thought about the kids first to be successful in life."

Williams immediately turned around a program that had fallen on tough times before his arrival. He also was a founder with the SkyIce AAU team. Around MacArthur, he talked to anyone he encountered.

Our hearts are with the MacArthur girls basketball family today. Coach Dubbs made our community a better place. His passion will be greatly missed in our game and community. We pray for coach, his family, and his players. 🙏🙏🙏

"I'm still in my office right now trying to think that he'll never come back and sit in this chair," Crutcher said, his voice breaking. "... With all the crazy stuff going on, we're supposed to be here to help these kids and my girls are crushed. I know they are. I know they're going to need counseling. They're going to need a lot of things. What can we do when we're not even coming back to school. I don't know how to grieve with them."

"I've seen his daughter around coaching with him and his wife being supportive of him at the games and different things like that," Spates said. "When I heard that this morning, we were all pretty shocked. When you work with a guy for three years ... it kind of hits home, to see the pain and anguish that his girls are going through and his family and people that cared about him and his family and his program. It's one of those moments that should make us coaches and everybody else realize that sports are just sports and life is the thing that should be celebrated and lived to the fullest.

"We need to understand that we should cherish people while they're here because none of us know what's going to happen tomorrow or after the next few minutes, seconds"

When the buzzer sounded on Thursday in a 69-32 win over Mahomet-Seymour, MacArthur (29-3) had its second consecutive regional championship.

One to two inches of rainfall is predicted to accumulate Thursday with showers and thunderstorms lasting throughout the day, according to the National Weather Service at Lincoln.

Watch now: How MacArthur guard Taya Davis used her platform and gave back to the community, with Mike Williams on her mind

Her voice went up a level, her eyes beamed and Taya Davis pointed towards a grassy patch between the basketball court and a fence at Hess Park.

Wagner: Why Tarise Bryson should be the next MacArthur boys basketball coach

It didn’t take long for me to learn the importance of getting to games early. It’s a chance to settle in, talk to a few people, watch a gym, f…

Mike Williams, head coach of the MacArthur High School girls basketball team, was passionate about the success of his players on and off the court. Williams, who coached the team to two regional titles during his three years at the school, died Wednesday morning.