Watch now: How MacArthur guard Taya Davis used her platform and gave back to the community, with Mike Williams on her mind
0 comments
Share this
Return to homepage × 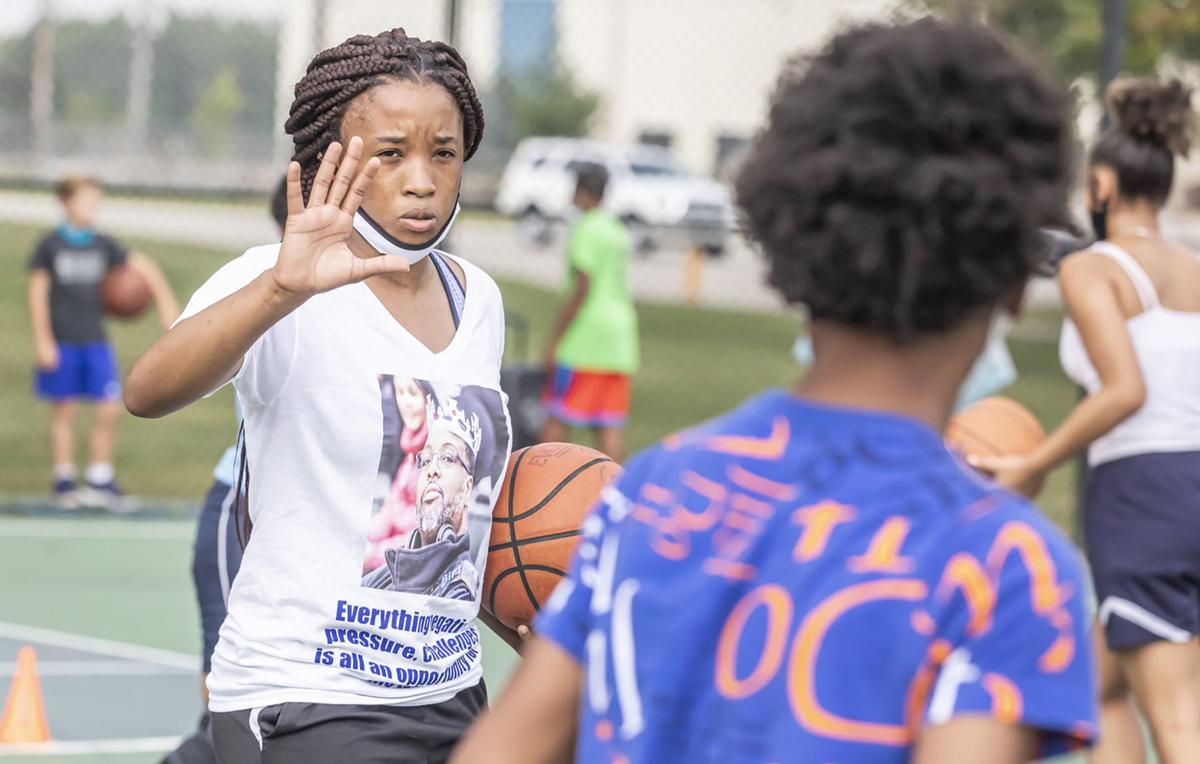 Using her former coach Mike Williams as inspiration, MacArthur senior Taya Davis decided to host a skills camp for young athletes at Hess Park. 'I never knew how much kids looked up to me,' she said, referring to phone calls she got from people wanting her help. Williams died unexpectedly over the summer. 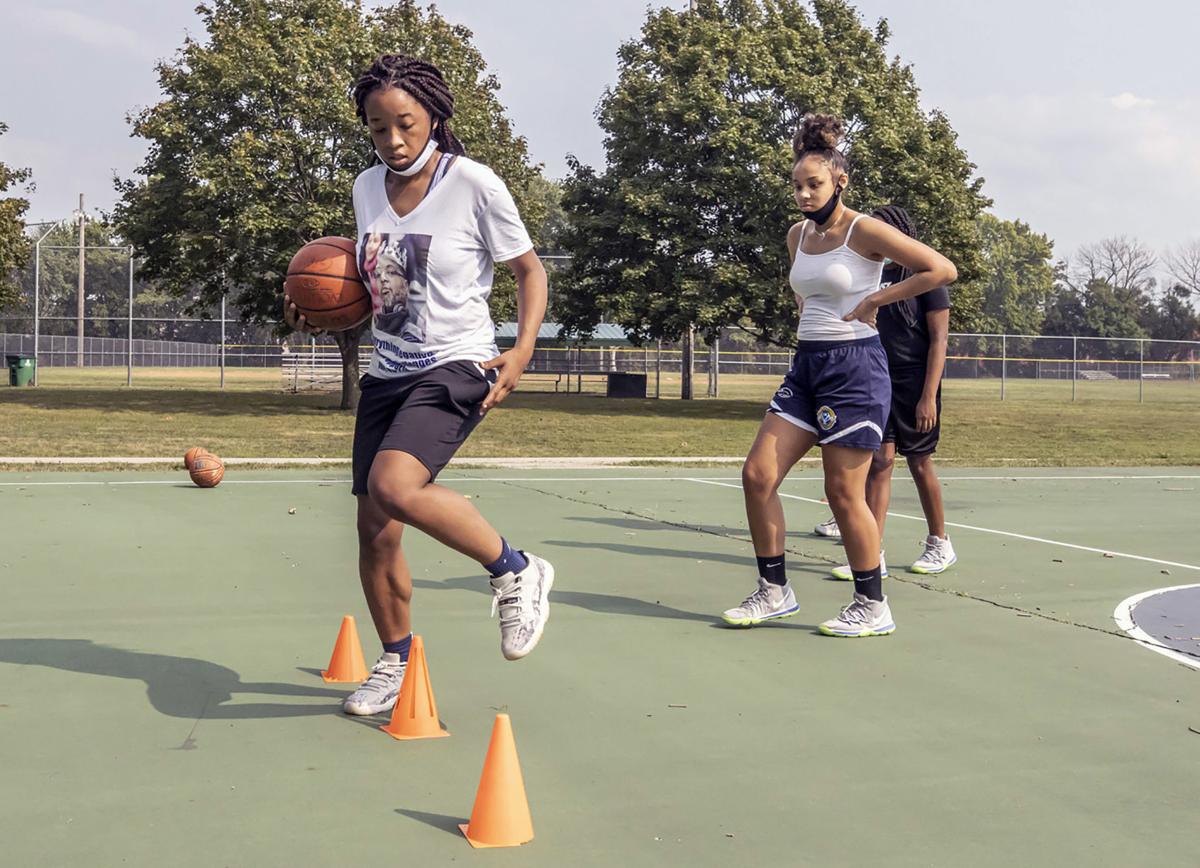 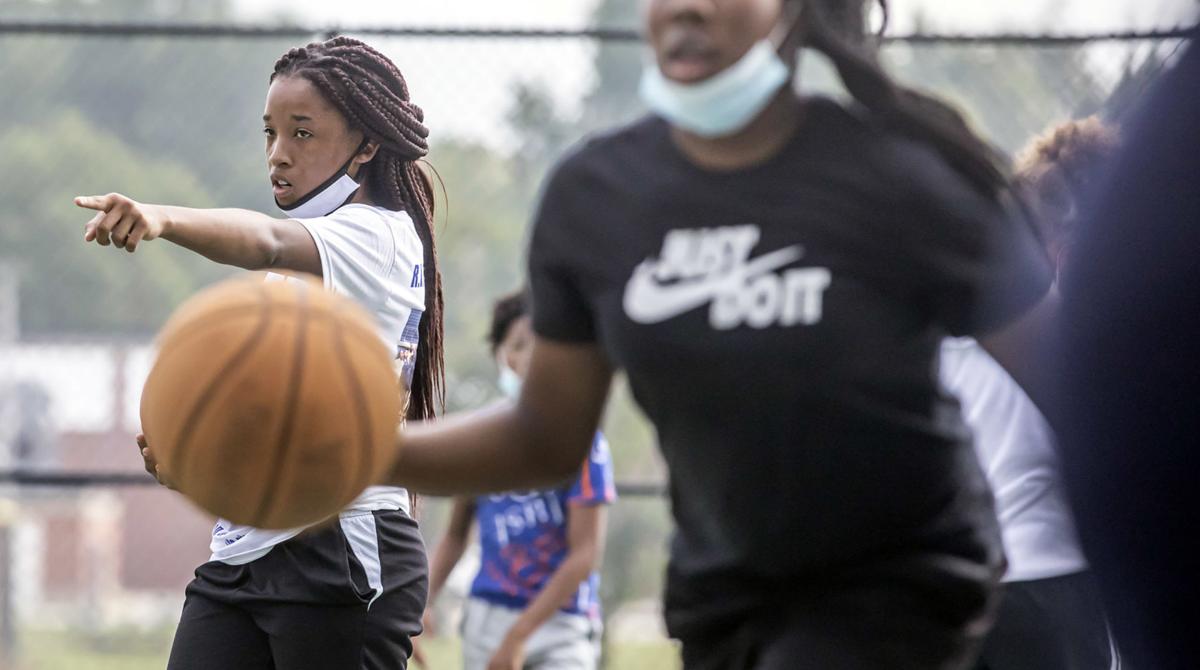 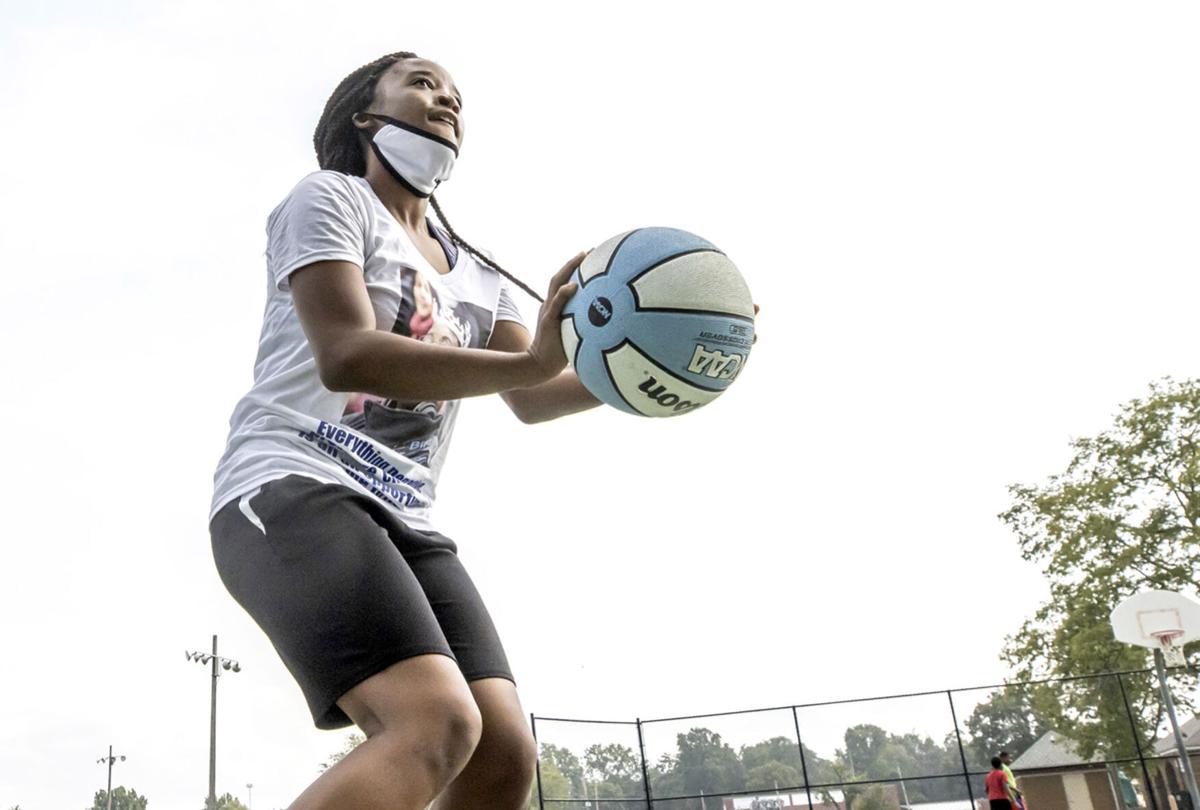 MacArthur senior Taya Davis goes up for a layup before hosting a camp at Hess Park on Wednesday. 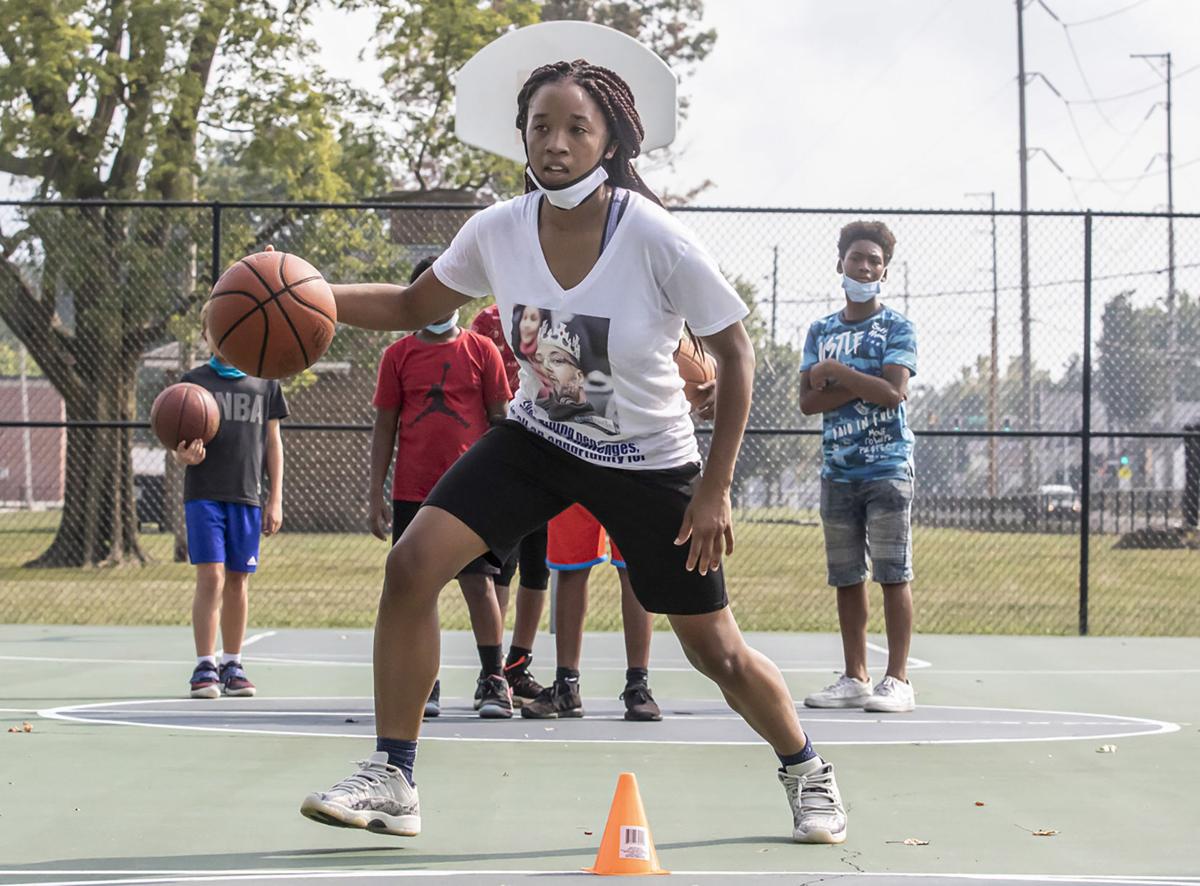 DECATUR — Her voice went up a level, her eyes beamed and Taya Davis pointed towards a grassy patch between the basketball court and a fence at Hess Park.

She knew that if Mike Williams could have been there, he would have been right in that area with a bucket hat, bottle of water and a towel around his shoulder as he helped her run a skills camp on Wednesday afternoon, supporting the MacArthur senior guard at every step along the way.

“He cared about all girls," Davis said. "When he was training me he always said he loved girls basketball more because it’s more fundamental. He loved training kids; that’s what he lived for. Any time you wanted to get in the gym, call him and I bet you he’d pull up any time. That’s always how he’s been."

Davis knew that Williams, her former MacArthur girls basketball coach whose untimely death in July sent a shockwave through Central Illinois, would have been proud of her. She used her platform as one of the top high school girls basketball players in the city — and state — to host a free camp at Hess Park, running younger athletes through cone drills, ladder workouts and layup drills.

But it wasn't without a heavy heart. Williams was present on her mind. He was her coach, friend, mentor and the guy who believed in her through every side-eye and scowl, knowing they weren't acts of defiance but rather her learning how to harness her fierce competitive drive. He won't get to be by her side when she picks a college or for her senior year. Losing him turned her world on its head.

She wore a white shirt with a photo of Williams wearing a crown, taken by Herald & Review photographer Clay Jackson, on Wednesday. He was a part of this camp, which Davis said she will also hold next week. She received donations of masks, hand sanitizer and water.

“That’s probably her mindset behind doing this is knowing that Dubb wanted to reach out and help all the kids and now she wants to do it on her own," said MacArthur girls basketball assistant coach Fred Jackson.

“This is really awesome for somebody her age to want to give back and help the kids, that speaks volumes of her," Jackson continued. "A lot of people read her wrong but Taya has a big heart; she loves the game and she loves to win."

It wasn't until the end of last year that she realized what kind of platform she has in the community. Younger players reached out to her telling her to keep pushing, asking for advice. She's no longer the young kid who grew up learning to dribble and play the game around her older brother, Maurice Davis. She's on college radars and has had tremendous success as a fundamental piece of MacArthur's renaissance.

“When I was little, I never really had stuff like this with people who are my age now coming to the park to work kids out for the community," Taya said. "I always had my brother. He was the only one to come and train me when I was little. Once my coach died, it made me think — a lot of kids were texting me — I never knew how much kids looked up to me. I had a lot of kids text me, like, ‘Could you train me now?’ and stuff like that."

Maurice Davis, 21, who helped Taya along the way and was important in her turning into one of the area's top dribblers, was alongside his sister for the camp. He always encouraged her to keep pushing, to look at the path ahead and to avoid detours.

He never put a cap on her potential, but told her to keep driving forward. Seeing an organized camp, which was attended by several members of the girls basketball team, was a proud big brother moment.

“I can’t even explain it," Maurice said. "She always told me she was going to stick to it. I always thought to myself that I didn’t want her to get thrown off by certain things because a lot of people have talent but certain things come by and they forget about it. She always stuck to it no matter what. She’s always been in the gym. She made me real proud."

With music pumping through a speaker near the court, Taya pointed younger athletes toward the rim with directions on how to complete the drill. In one particular drill, a younger camper didn't dribble step over a cone as was instructed. In a quiet, measured voice, Taya explained that he would need to go over the cone.

It was reminiscent of the patience that Williams used to show her as she was finding her way and breaking onto the scene.

“I think it’s an excellent idea and will help a lot of kids just teach them things to do and they’ll be extra strong," said Monica Depriest, whose daughter played for Williams and was at the camp. "Nobody can be Dubb, but Taya had him for a couple years and I think this is the best thing they could get.

“His spirit is out here."

Taya Davis share information about her camp and its inspiration at herald-review.com

The recent announcement that the Washington Redskins franchise would be dropping its controversial nickname in favor of a yet to be determined alternative, has brought the issue of Native American-themed logos and nicknames back to the forefront.

Members of the Beautify Decatur Coalition are working to put Decatur on the map once again.

"As many of you know, my faith is my guide. It's really that simple," he said in a Facebook post on Monday.

Using her former coach Mike Williams as inspiration, MacArthur senior Taya Davis decided to host a skills camp for young athletes at Hess Park. 'I never knew how much kids looked up to me,' she said, referring to phone calls she got from people wanting her help. Williams died unexpectedly over the summer.

MacArthur senior Taya Davis goes up for a layup before hosting a camp at Hess Park on Wednesday.