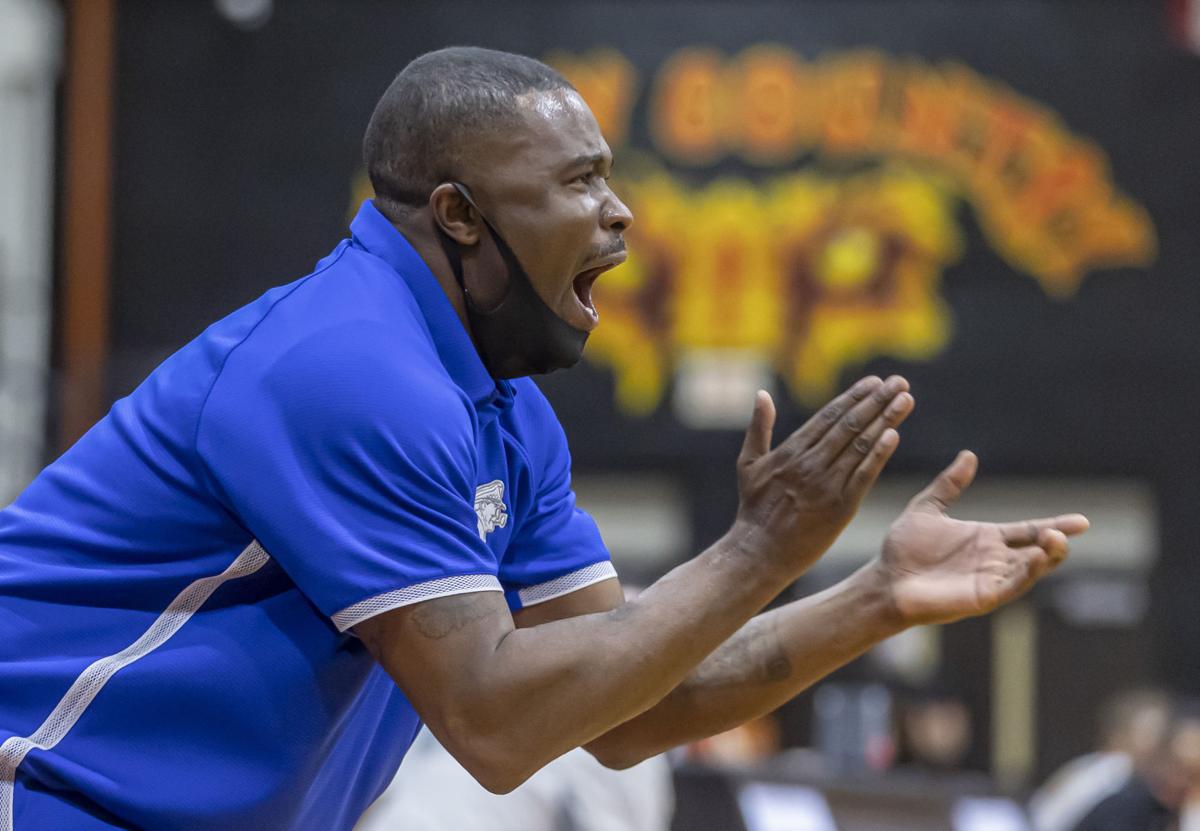 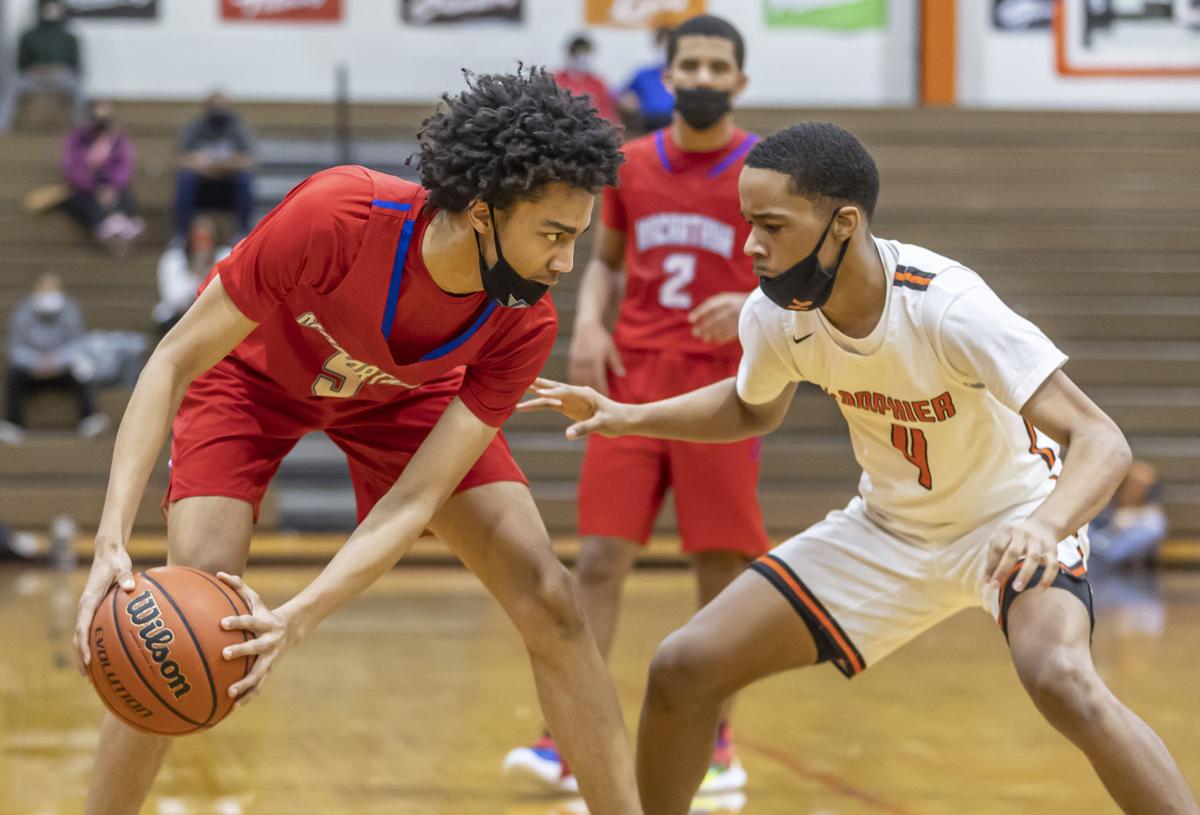 MacArthur's Ryan Bartley (5) goes up against Lanphier's J'Shaan Richards on Saturday in the third quarter. More photos and videos at www.herald-review.com

The Generals battled the No. 1-seeded Lions for 32 minutes and led in the final moment before coming up one point short, 59-58, in the Central State 8 Tournament championship game at Lanphier.

Behind hot shooting from Brylan Phillips, MacArthur got out to a quick lead 12-6. Following a Lanphier timeout to regroup, T.J. Price hit back-to-back 3-pointers to tie it 12-12.

Price connected on a third 3 in quarter and the Lions led 20-17 after one quarter. Philips had 10 points in the period.

"Brylan is like another coach out there for us and a facilitator. He is a coach's dream to have someone like that on your team," MacArthur coach Terise Bryson said. "Brylan came up big tonight."

The second quarter saw much slower action as Lanphier led 29-28 at the intermission.

The Generals attempted to hold the ball for the final two minutes of the first half and when they took it to the basket, Qua Smith was called for the charge. Lanphier took advantage with a buzzer beating 3-pointer from Price, his fourth of the half.

In the third quarter, 6-10 Lanphier center K.J. Debrick hit six free throws as the Lions extended their lead to five points, 43-38, at the end of the third quarter. In total, Debrick made 10-of-12 from the line and finished with 14 points.

Lanphier got the ball underneath to Debrick, who made the game-winning shot for the 59-58 victory.

"I'm so proud of our guys and they fought to the end and never gave up," Bryson said. "Lanphier is a good team and we could have given up when we were down seven but they didn't give up.

"We had a group of seniors who played so hard and I feel so bad for those kids. They fought so hard with the short season."

"Brylan helped us do a lot this whole season and he really stepped up tonight and I really appreciate him for that to help us in my last season," Spannaus aid. "He left it all out there, just like the rest of us. I couldn't as for more from a teammate."

MacArthur (9-3) closed out the short basketball season with the team finishing second in the CS8 Tournament.

"It is something to be proud of but I know we could have come out on top. I think we all feel like we should be on top right now," Spannaus said. "There was no give up, we left it all out on the floor but it just didn't go our way tonight."

The MacArthur boys basketball team came out of halftime on a 20-5 run against Sacred Heart-Griffin in the Central State 8 Tournament semifinal on Friday at home.

DECATUR — An energized MacArthur girls basketball team took an early lead and cruised to victory, 63-49, over Springfield High in the Central …

Eisenhower football head coach Steve Thompson could see the writing on the wall.

The MacArthur boys basketball team limited Eisenhower's RJ Walker to three points in the first half on Tuesday, building a 40-23 halftime lead on the way to a 79-62 win in the Central State 8 Tournament quarterfinal matchup.

MacArthur's Taya Davis and Quincenia Jackson combined for 39 points as the Generals came back from 11 points down at halftime to win 47-40 over Normal University in a Central State 8 Tournament quarterfinals game.

No. 9 MacArthur girls basketball followed the game plan to victory over Rochester

Watch now: Behind 19 points from Hayley Diveley, the No. 9 MacArthur girls top Jacksonville on senior night 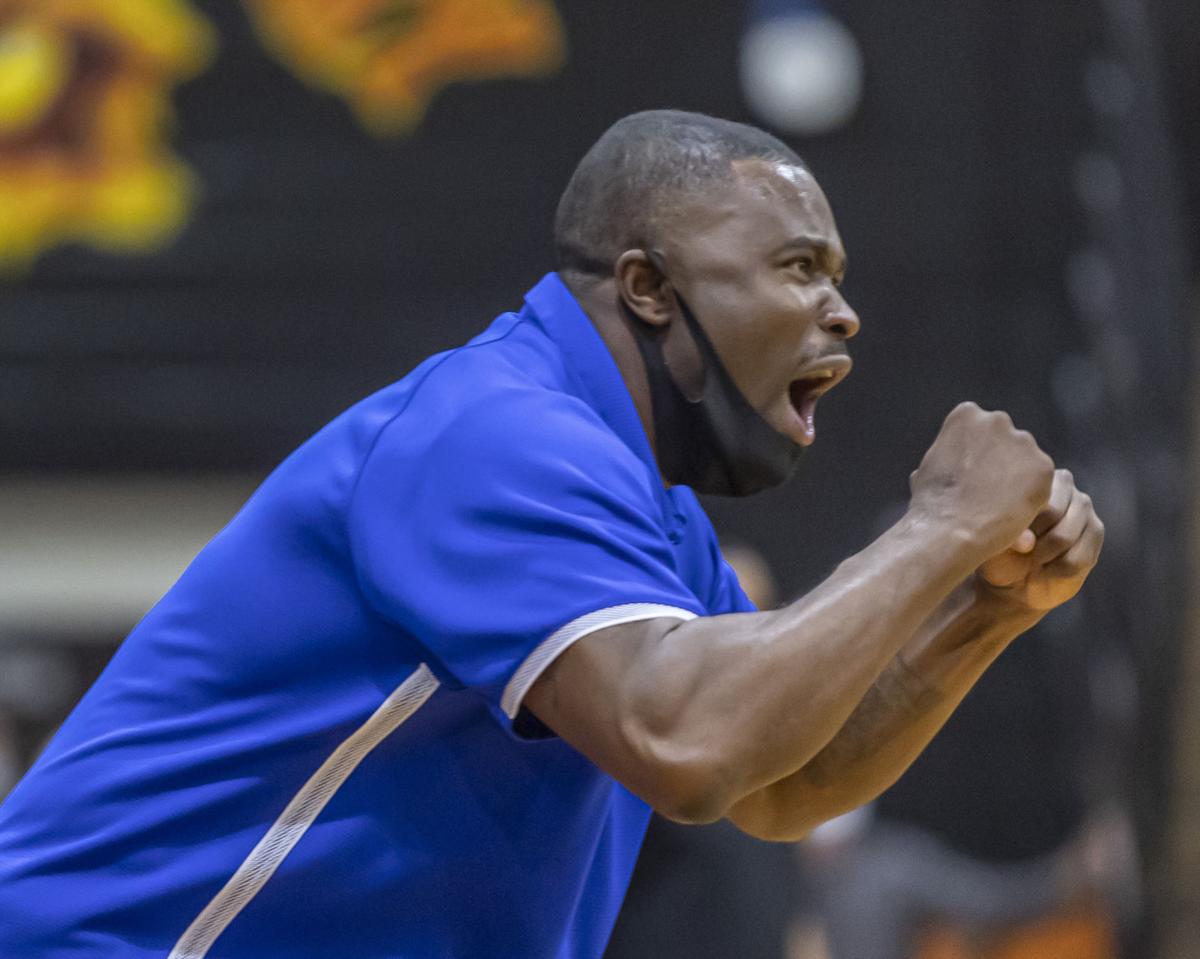 MacArthur's Ryan Bartley (5) goes up against Lanphier's J'Shaan Richards on Saturday in the third quarter. More photos and videos at www.herald-review.com