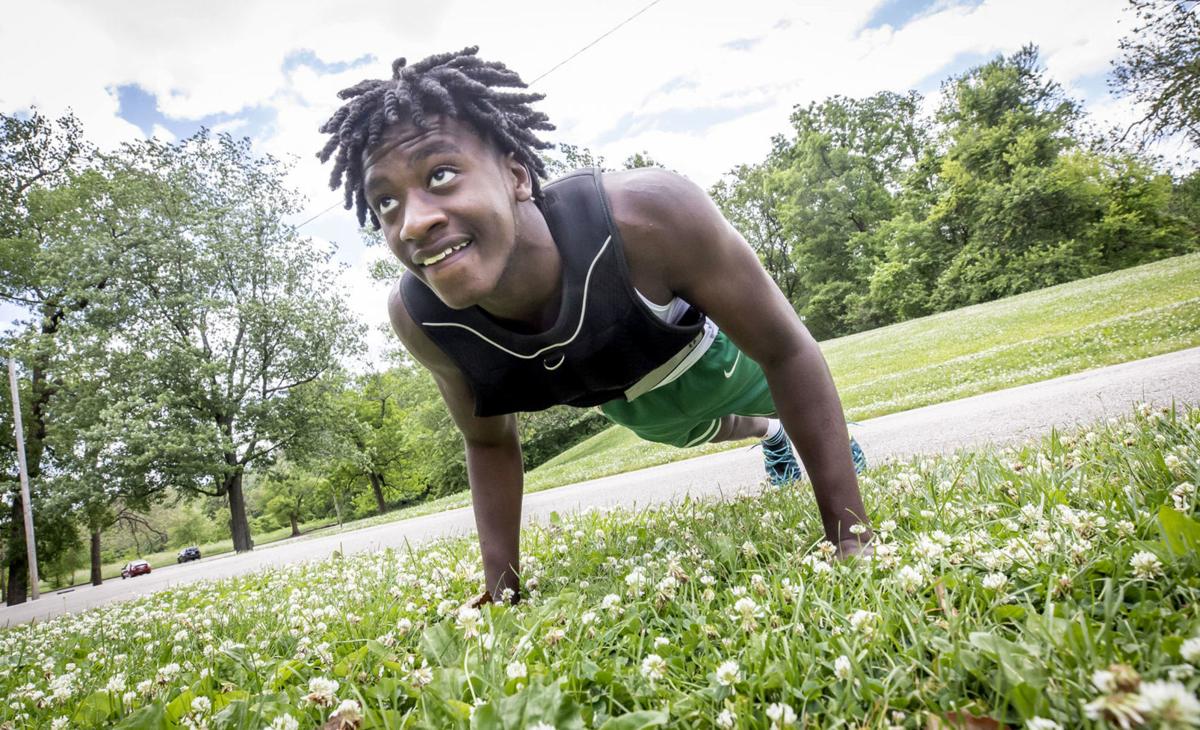 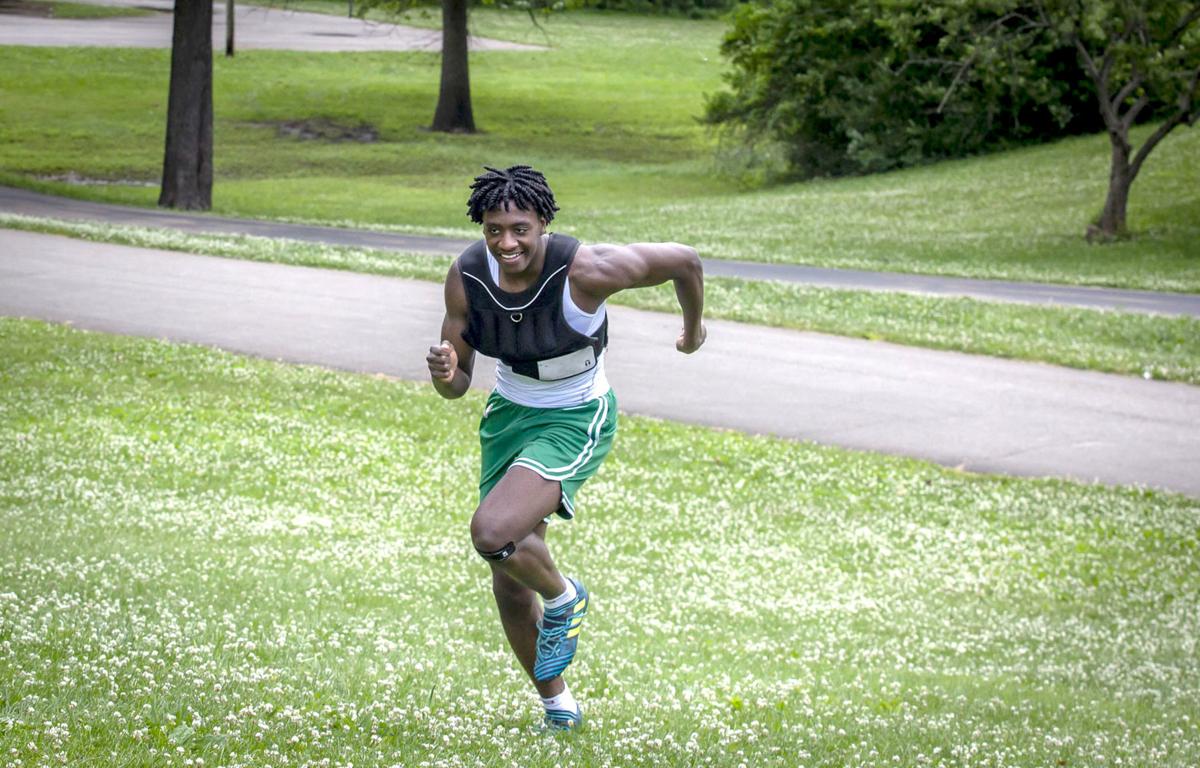 MacArthur senior Nick Spannaus has been lifting weights, running and biking during the time sports has been globally paused because of the coronavirus. 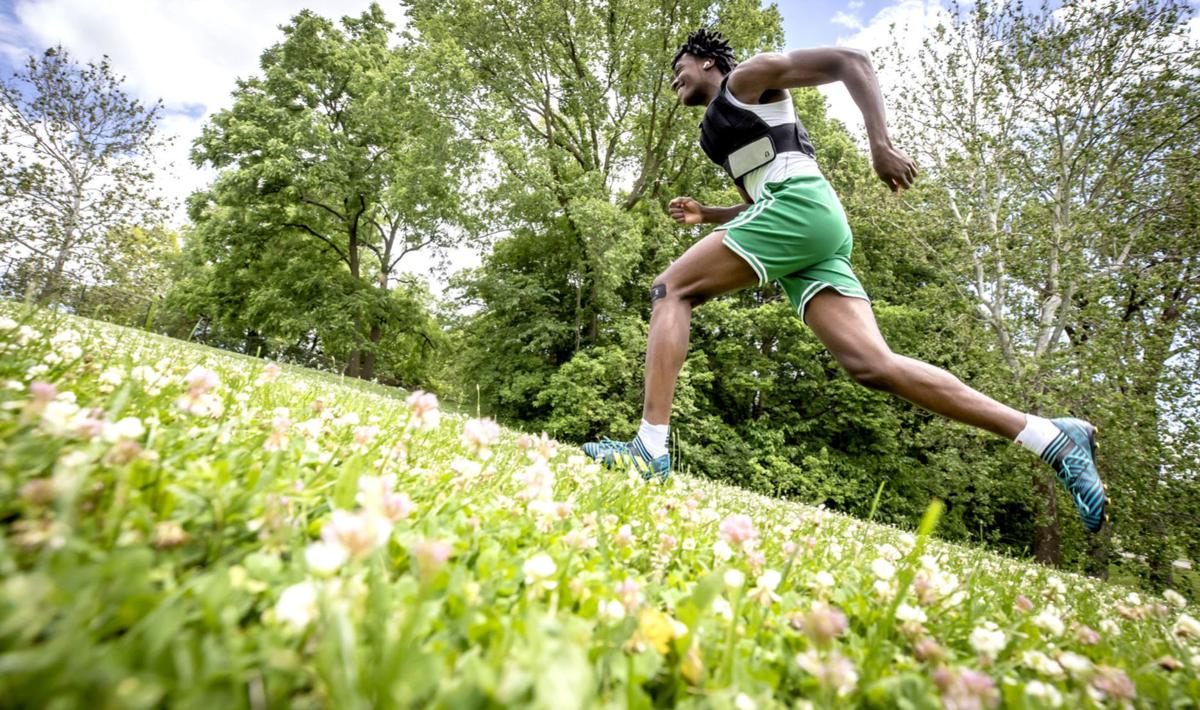 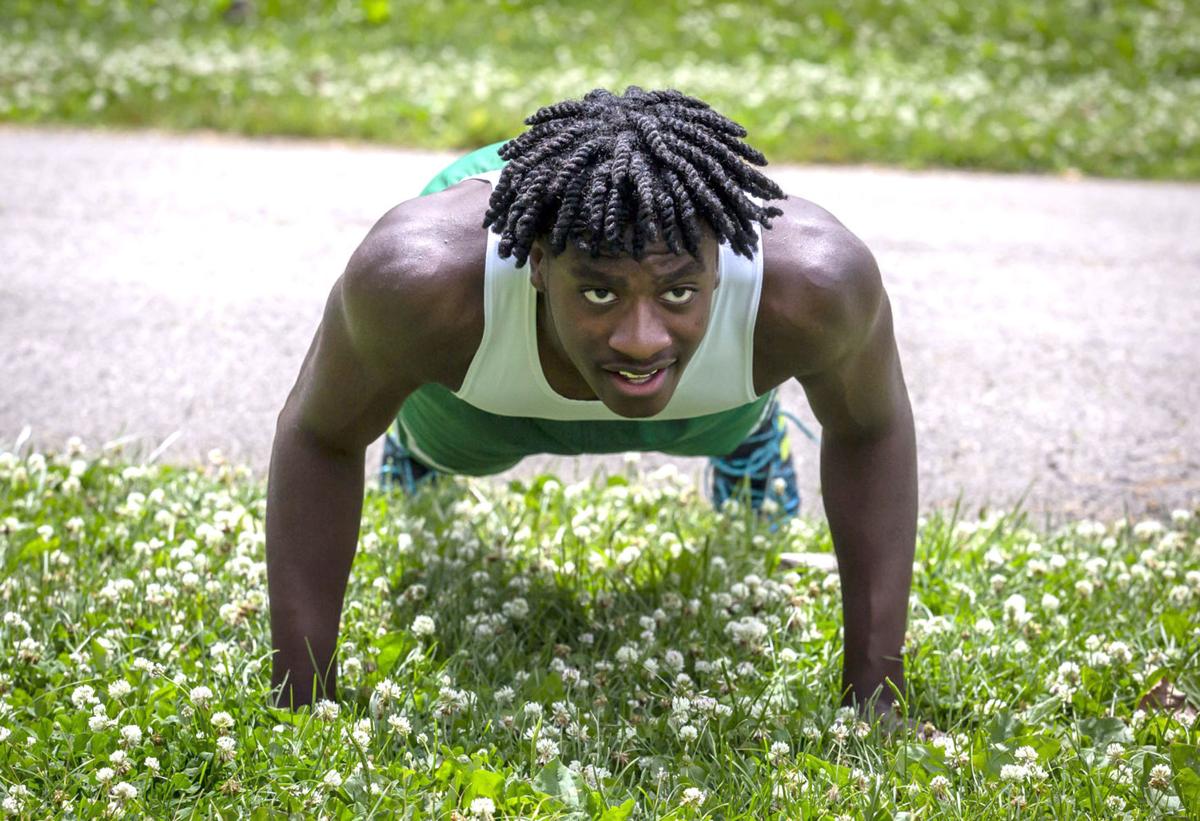 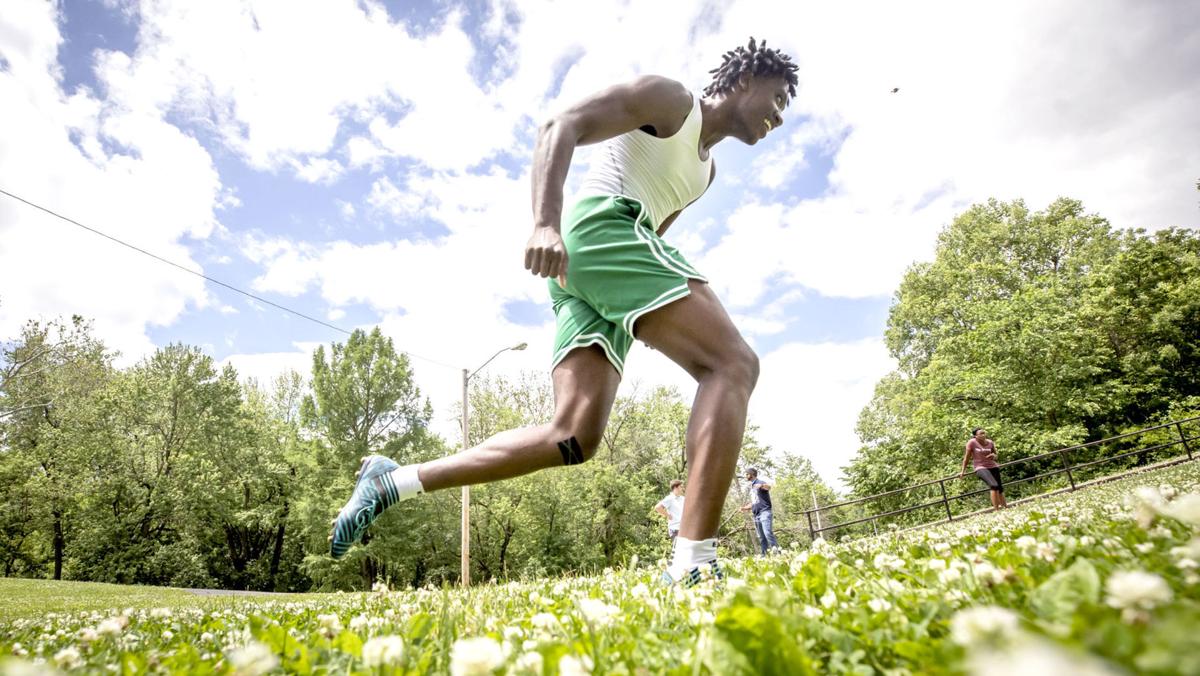 DECATUR — One stride follows another, up a hill with an incline that looks like it might never actually end.

Nick Spannaus Jr., a senior basketball player at MacArthur, powers up a steep hill at Fairview Park in green basketball shorts, a white, sleeveless dri-fit shirt and a 10-pound weighted vest covering his torso. Off to the side, his father, Nick Spannaus Sr., watches intently on a not-too-hot summer day.

At the bottom of the hill, Spannaus Jr. has 10 pushups waiting for him before he runs back to the top, and this workout lands on the easier side of the work he's been putting in for the last two months.

Normally, Spannaus Sr. would be alongside his son, pushing themselves up the hill together, but his day job requires him to go back to work. Such as been the last three months of their lives together: Father and son lifting weights in their basement, biking around the park or lumbering up a hill in town that's been well-known to host some of the city's best athletes for conditioning training. Sometimes there are no cell phones and no headphones, just focus and quality time spent between father and son.

With access to gyms and weight rooms limited since the middle of March to try to slow the spread of the coronavirus, Spannaus Jr. has found other ways to ready himself for his senior season.

This was always the plan, COVID-19 pandemic or not: Take about a month off after the season and build muscle for the upcoming season. The pandemic just helped father and son do it side by side.

“Some days I’ll have a little ‘tude or whatever," Spannaus Jr. said. "He definitely makes it hard, but at the end of the day I know he wants the best for me. I try to make it an advantage. I know there are some kids who would still be in bed while I’m doing this. I always try to take advantage of it. It’s starting to come to me slower and slower that I might have the opportunity to play basketball in college. That’s my mindset basically everyday.

Spannaus Sr. served five years in the United States Army and physically looks like he hasn't lost a beat. Spannaus Jr. is the senior on the basketball team whose junior season was hampered by a back injury that cost him 14 games and forced him to shut down training for nearly a month. He came back and averaged 12.1 points and six rebounds for a team that won a regional championship.

“Normally we’re out here getting after it together; coach, dad and workout partner," Spannaus Sr. said. "He keeps me honest as well. This is something we would have done anyway."

Spannaus Jr. is a 6-foot-5, 190-pounder who MacArthur coach Ron Ingram believes has the ceiling of a Division I basketball player. That's still tough for Spannaus Jr. to wrap his head around, but he's slowly coming to terms with the fact that he could make that leap before he's done playing for the Generals. It's what pushes him up that hill time and time again.

“It’s still trying to come into my mind," Spannaus Jr. said. "That’s a big thing for some kids. Just me knowing where I’ve been from sixth grade and coming from John’s Hill to now, I know I’ve made a lot of improvements. Even my old teammates have said I’ve made a lot of improvements. At times it’s like, ‘Yeah, I can go D1. I know this. I’m confident.’ At the same time, I’ve got to be a little bit humble about it because I’ve still got to put this work in. Nothing is going to be handed to me."

Said Ingram: “I think Nick has a very high ceiling to be a Division I basketball player. If he keeps working like he’s doing and once he gets in that gym; he’s going to start working out with (assistant coach) Tarise Bryson. Once he starts that, you’re going to see a whole entirely different Nick."

The father and son duo get in some gyms around town when possible, but those haven't always been easy to come by. Don't count on catching them in a one-on-one game — Spannaus Sr. said those ended after his son's freshman year. But their time together has been instrumental in the physical growth that Spannaus Jr. has shown in the last two months. Spannaus Jr. says he's put on about 10 pounds since the end of last season.

Ingram, of course, has noticed.

“He’s definitely getting ready for the next season and the next level," Ingram said. "No matter where he goes to school, he’s trying to prepare himself for that level. He looks good and he’s ready. He’s got work to do and he’s going to get the work done."

Spannaus Sr. worked from home for the first few months of the shutdown, but has since returned to his job as things have started to open back up. At no point, though, did he have to prod his son to work.

“Me working out all the time, it’s hard to find someone to work out with," Spannaus Sr. said. "It was, like, a chore for him, but now he’s pushing me like, ‘Dad, we’re lifting today. Dad, we’re training today.’ If I don’t have anything planned, it’s like, ‘Sorry dude.’

“He keeps me wanting to get after it as well. Everyday I’m looking for something for us to do, for him to do because he’s only 16. Who knows where he could be if he does the offseason stuff that a lot of people — kids and grown ups — don’t do."

The Raiders were the defending sectional champions, with the core of the group as juniors, and embraced the pressure to go to the state final four all season long.

High school gyms around the state of Illinois are supposed to be full of basketball players working on their skills for the upcoming season.

Watch now: Re-watch the Central A&M vs. Nokomis sectional championship game from 2019 with the team

It's been more than 14 months since the Central A&M boys basketball team beat Nokomis in a 2019 Class 1A sectional championship game. But they remember nearly every detail of the game.

To John Snyder, he was a buddy and teammate at Cornell High School, creating a bond that lasted more than 70 years.

MacArthur didn't match coach of the year Ron Ingram's goal for 20 wins, but the Generals got hot down the stretch and brought home a regional.

Eisenhower's R.J. Walker has worked to add something to his game every year, and it paid off with the Macon County Player of the Year Award as a junior.

Central A&M's Connor Heaton is the Area Player of the Year for the second time in three years.

Lincoln's Neil Alexander is Area Coach of the Year for the fourth time after leading his team to a 32-2 record and winning games by an average of 23.6 points.

On paper, it looked like business as usual for Teutopolis girls basketball coach Laurie Thompson. Her team won the 38th regional and 26th sectional title in the Wooden Shoes program history.

This week, some football players from around the area were able to get together in groups of 10 or less to begin voluntary workouts.

The top five games reporter Joey Wagner has covered at the Herald & Review.

WAGNER: New venue, format should bring excitement to IHSA boys finals — but Champaign-Urbana has to sustain it

It's easy to imagine the casual fan checking out the IHSA Boys Basketball State Tournament for the first year back in Champaign. It's on the hosts to get them to keep coming back after that. 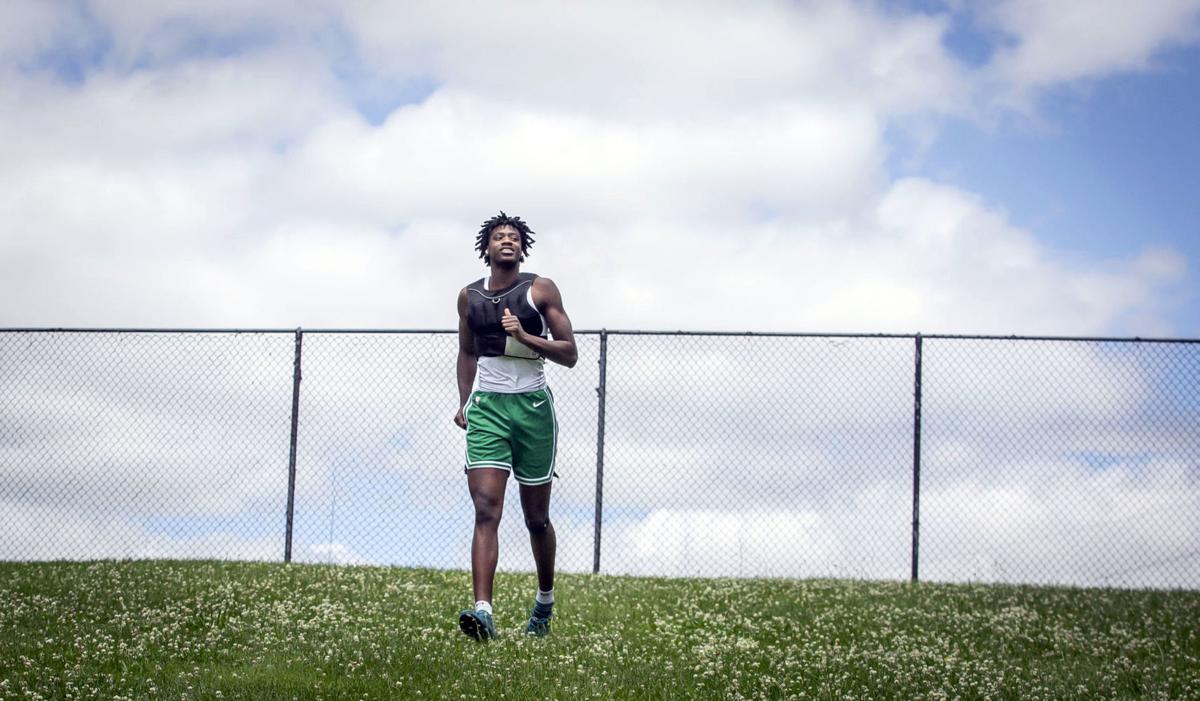 Though he missed 14 games, MacArthur's Nick Spannaus averaged 12.1 points and six rebounds for a team that won a regional championship last season.

MacArthur senior Nick Spannaus has been lifting weights, running and biking during the time sports has been globally paused because of the coronavirus.