CHARLESTON — Back in November, when Charleston senior Shae Littleford signed her National Letter of Intent to play at the University of Tennessee-Martin next season, she was optimistic about the possibility of getting to play her senior season.

"I think we have a really strong team this year and I'm really excited to get back on the court with them," Littleford said in November.

Five months later, with high school basketball back in action, Littleford couldn't have been more right about the strengths of Charleston's girls basketball team.

The Trojans are 11-0 and have navigated a 10-0 Apollo Conference schedule. Their biggest challenge came Saturday against Mattoon, when Littleford connected on a buzzer beater to get the 52-50 win.

The winning shot was set up by a block from sophomore forward Alycia Triplett of Mattoon's Mallory Ramage, the 2020 H&R Area Player of the Year. It was the type of big play from a young team that Trojans head coach Jeff Miller has seen this year.

"We didn't panic. When you think about it, we had a freshman (Addison Shrader), two sophomores (Triplett and Delaney Meister) on the floor," Miller said. "So we had a fairly inexperienced team out there. I guarantee you the freshmen and sophomores hadn't been in that situation all year. They handled themselves and they maintained their composure."

Triplett, along with senior Katarina Blase, have added stable near double-double production each game that complements Littleford's explosive offensive capabilities (24.1 points per game).

Triplett has averaged 10.7 points and 9.7 rebounds while Blase has 6.0 points and 10.2 rebounds per game. Blase, a Parkland College commit in volleyball, rejoined the Trojans this season after not playing since her freshman year to focus on volleyball.

"I call (Triplett and Blase) our 'Twin Towers.' They are so athletic and they are so tall. They get on the boards, they look to outlet and they run the floor really well," Littleford said. "This (season) is different. I've never had this type of height on a school team, so I am super thankful. We are just going to keep it rolling."

Littleford took the game-winning shot, but it was made possible by Triplett.

"Alycia's abilities are like none other and she is a great sophomore player. She's going to have an incredible career here and just to be able to have that confidence to step up and make that block, it was really big," Littleford said.

Triplett said she appreciates the role she and Blase play in keeping the Trojans offense moving in getting the ball to Littleford as quickly as possible.

"(Kat and I) get the boards and we run the floor a lot," Triplett said. "As soon as we get the board, we look out to the guards to throw it out so we can get a transition (basket). (Shae) is an amazing leader. She has talents like no other and she is just amazing. She is great with the ball and shooting and, really, just everything."

Another favorite target of Triplett's for a quick pass is Meister, who hit three 3-pointers in the fourth quarter against Mattoon.

"(Delaney) was the regional champ for 3s last year, so she is an amazing 3-point shooter," Triplett said. "Every time I'm in the post and I see her open, she is getting that 3."

In Littleford's sophomore season, the Trojans were regional champions with a 29-1 record and she was the H&R Player of the Year. Last season's disappointing 9-18 record — a season during which Littleford suffered an injury — is a distant memory. The Trojans are making the most of their COVID-19 shortened season. Littleford became Charleston's all-time leading scorer on Monday in the Trojan's 55-35 win over Taylorville. Her 1,879 points surpassed Morgan Sherwood's previous record of 1,876 points.

"This year is a lot different than it has been in the past. We don't have a JV team so we are really a close group of girls," Littleford said. "I think it is going really well and we work really well together. We are (undefeated) and we have a very athletic team. It is very different this season and we are probably the most athletic team we have ever had."

Inside Pitch: The Cardinals' bullpen is beginning to look like a dominant force

Blistering start to spring could break records in Southwest

Blistering start to spring could break records in Southwest

Watch now: Illinois basketball moves to No. 4 in AP poll as it prepares for No. 2 Michigan on Tuesday

The University of Illinois men's basketball team received historic news Monday as it moved up to No. 4 in the latest Associated Press Top 25 poll.

Watch now: It won't make the highlight reels, but No. 5 Illinois' poise at the free throw line won the game against Wisconsin

They aren't the moments that will make ESPN's Top 10 plays or clips that will go viral on Twitter, but it was Illinois' free throw mastery in the final moments of its 74-69 win over Wisconsin that clinched the game for the Illini.

The meeting of the Central State 8's top two girls basketball teams — Sacred Heart-Griffin and MacArthur — was decided by defense on Saturday.

Entering its game with Mattoon on Saturday, the Charleston girls basketball team hadn't been tested this season.

Watch now: No. 10 Meridian boys stop a late comeback from Shelbyville to stay on top of the CIC

For three quarters in Friday's meeting of Central Illinois Conference rivals Shelbyville and Meridian, it was a back and fourth battle between the Hawks' Graham Meisenhelter and the Rams' Kade Kull.

Warrensburg-Latham handed Tuscola its first Central Illinois Conference loss of the season on Friday, winning 65-58. Check out photos and video interviews with the coaches and players.

On Friday against Springfield High, MacArthur's girls basketball head coach Sean Flaherty received an answer to a question that he had been wondering all season: What would happen if Generals standout center Quincenia Jackson got into foul trouble?

Watch now: Behind 19 points from Hayley Diveley, the No. 9 MacArthur girls top Jacksonville on senior night 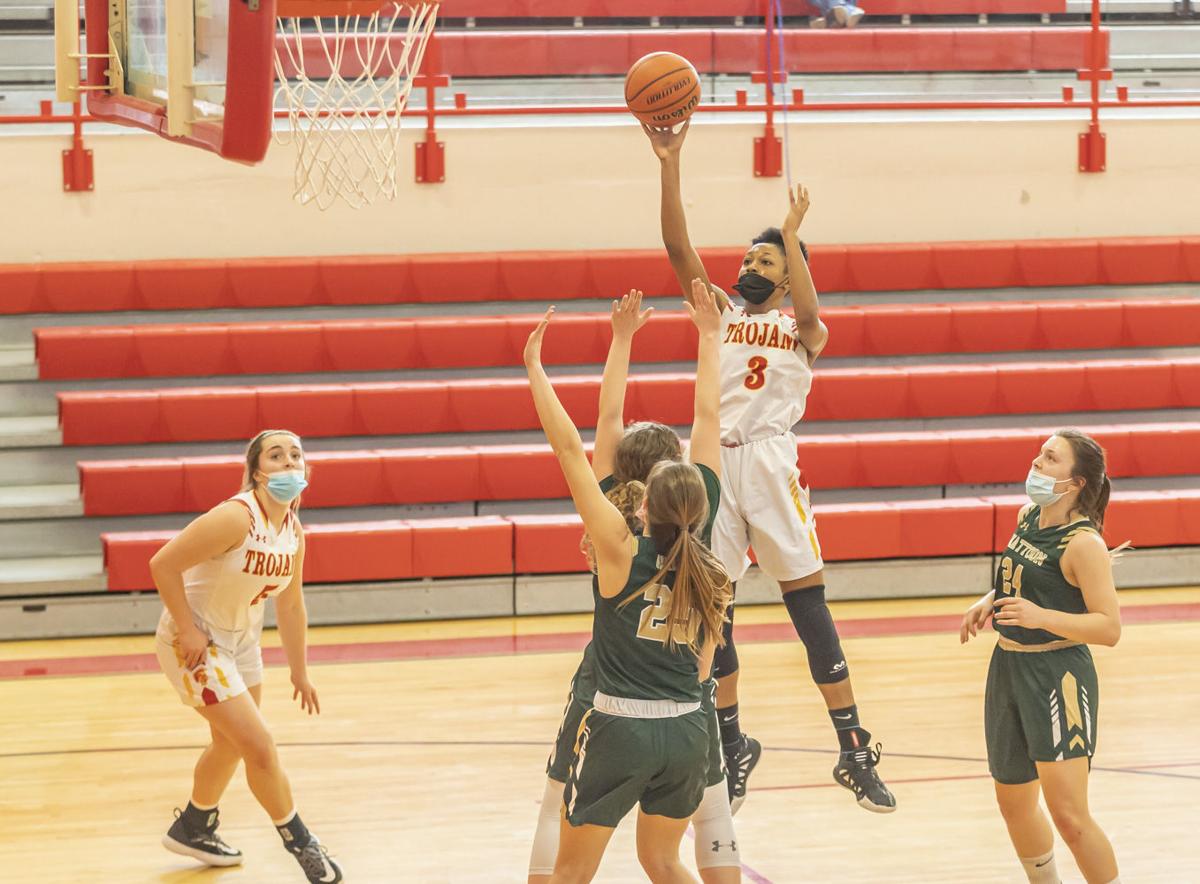 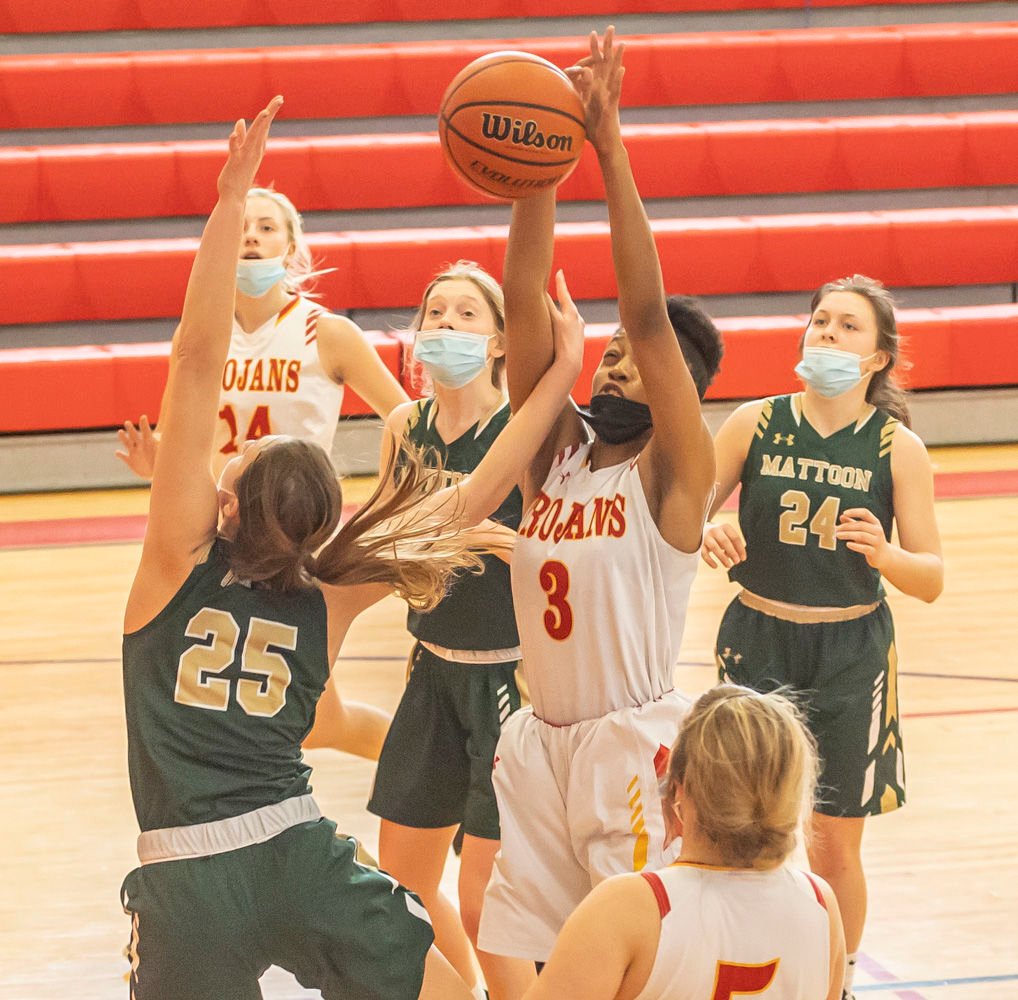 Charleston's Alycia Triplett (3) blocks a shot by Mattoon's Mallory Ramage (25) in the final seconds of Saturday's game at Charleston. 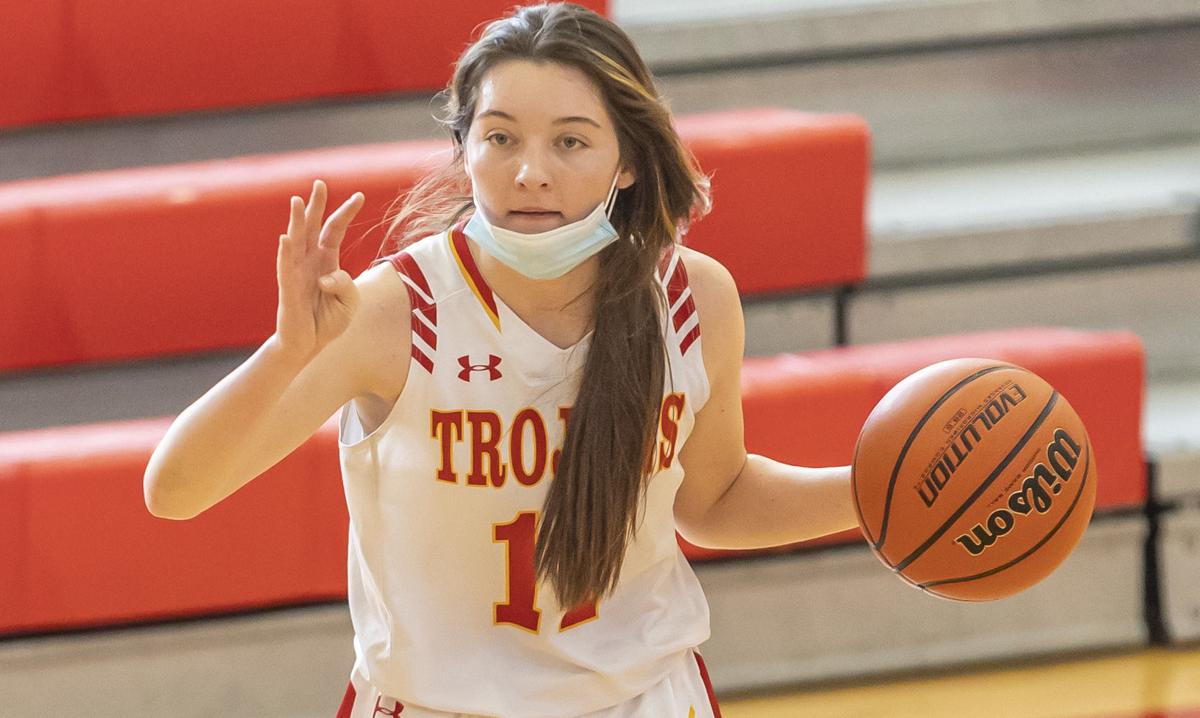 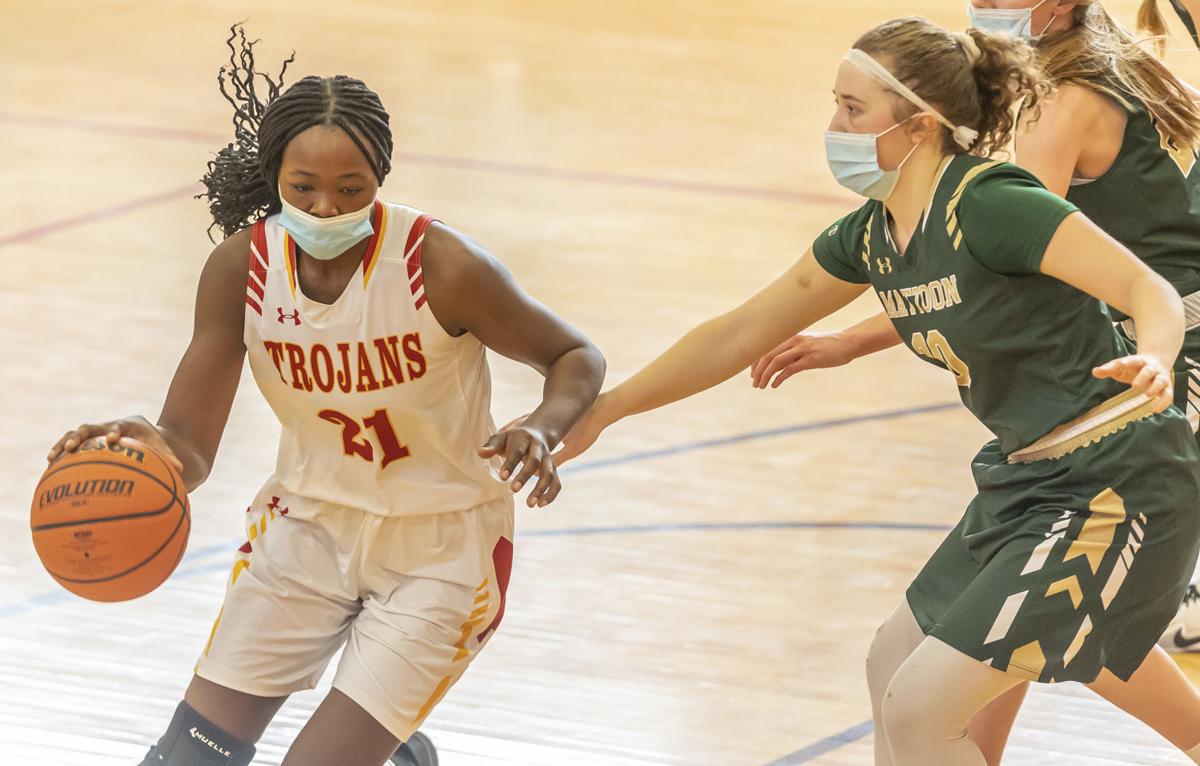 Charleston's Katarina Blase (21) heads to the basket against Mattoon on Sunday. 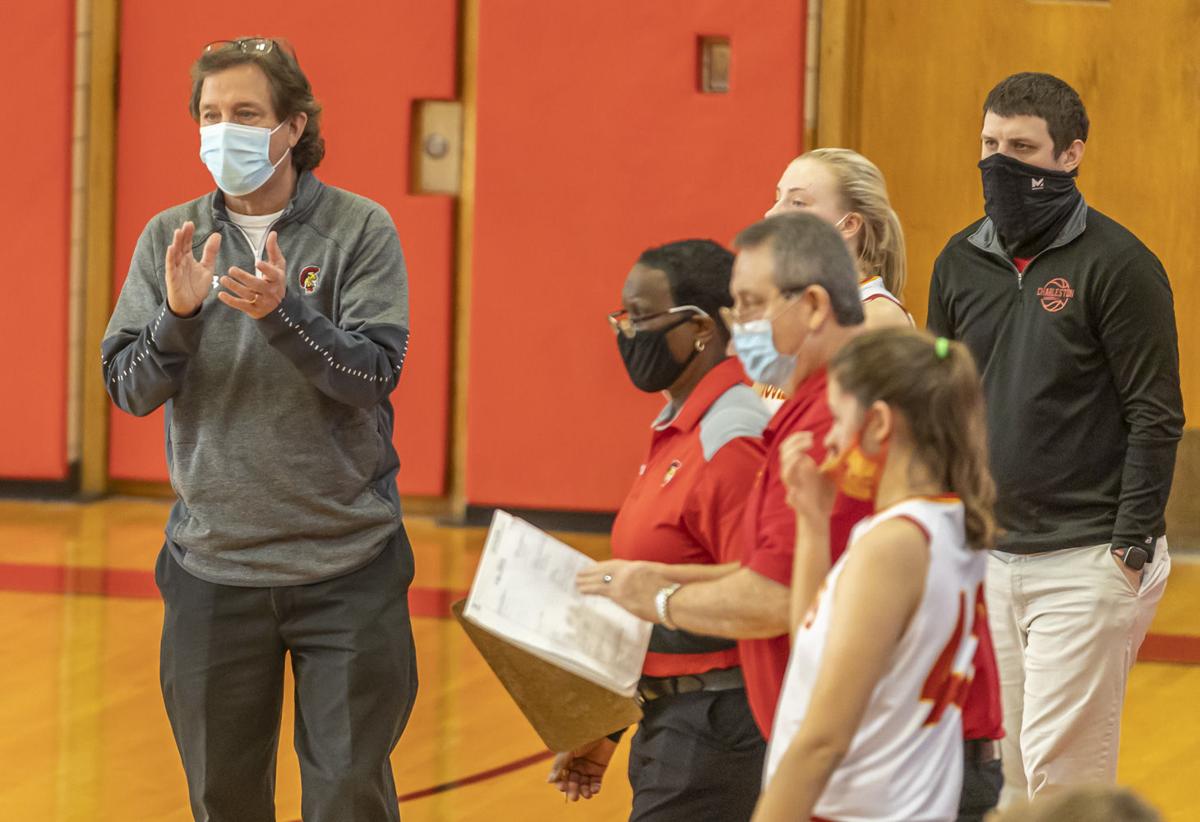