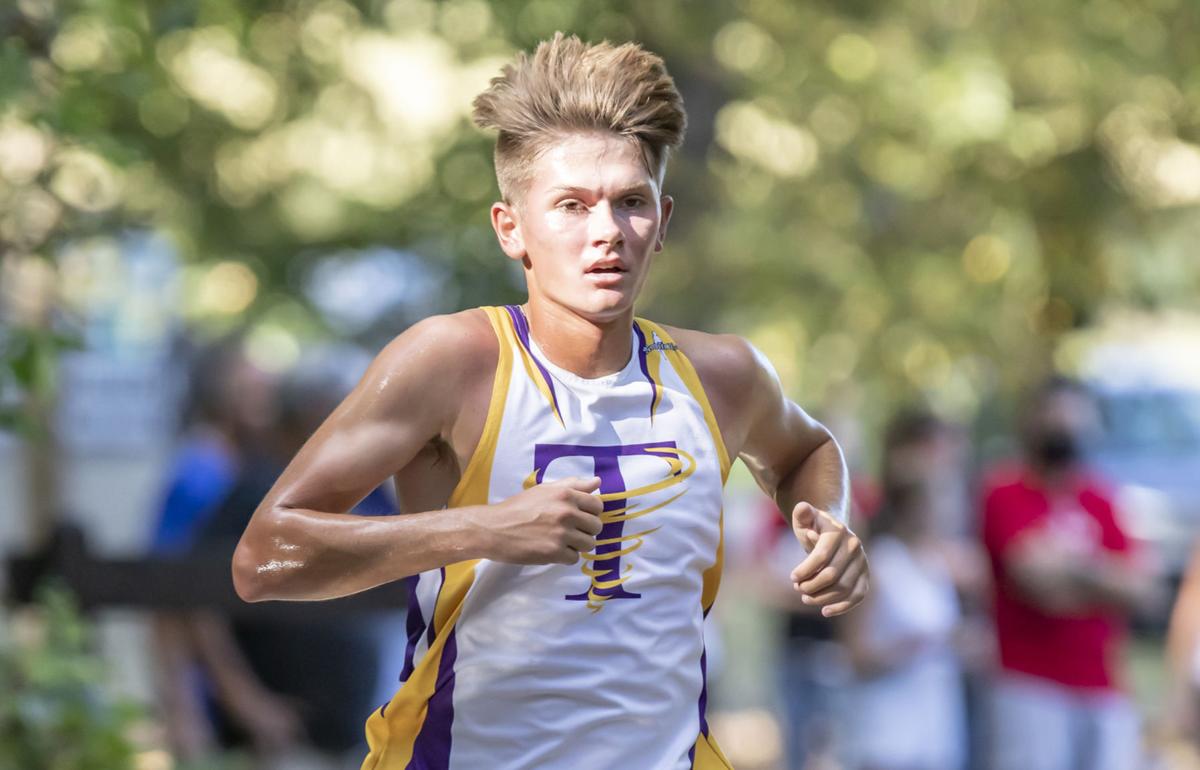 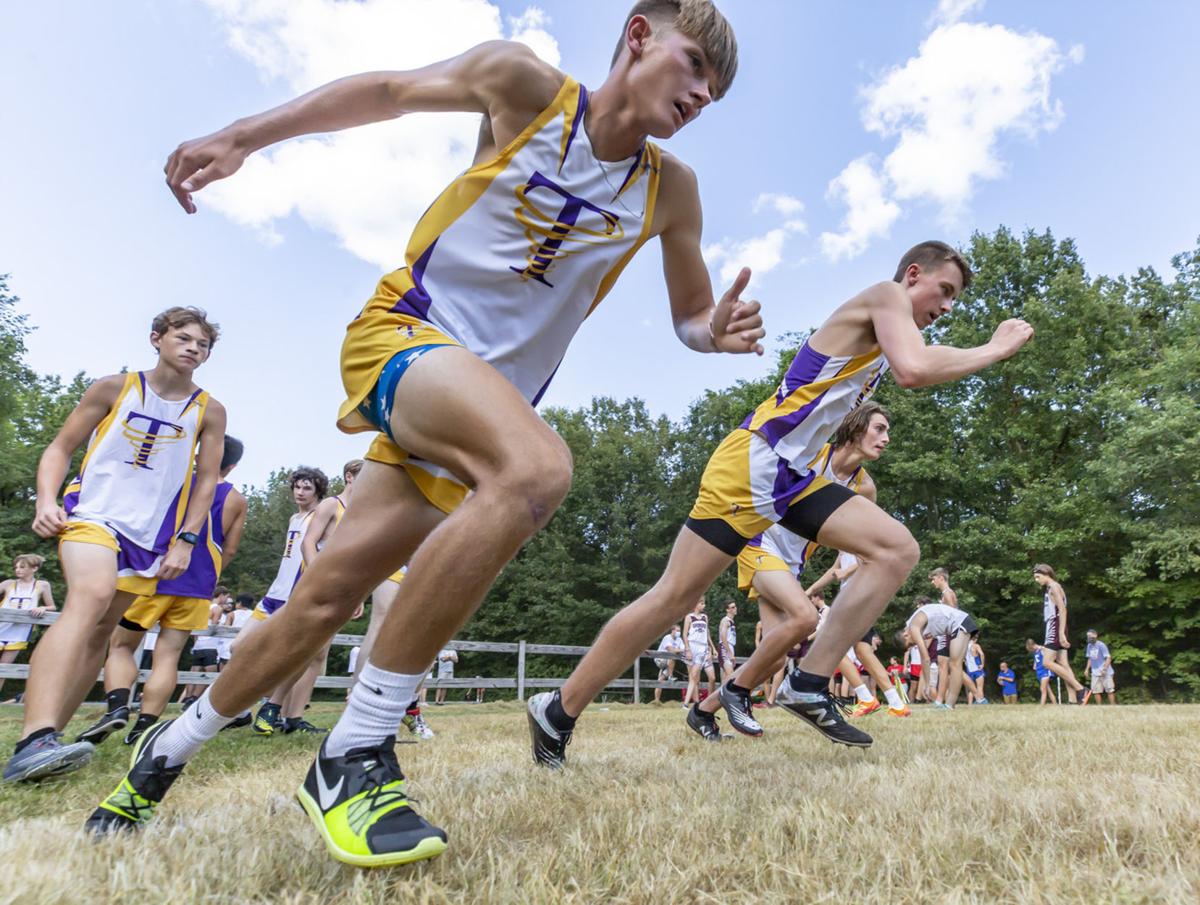 Taylorville's Chris Cherry warms up before the start of a cross country race Friday at Fort Daniel Conservation Area.

Taylorville's Chris Cherry warms up before the start of a cross country meet on Friday at Fort Daniel Conservation Area. 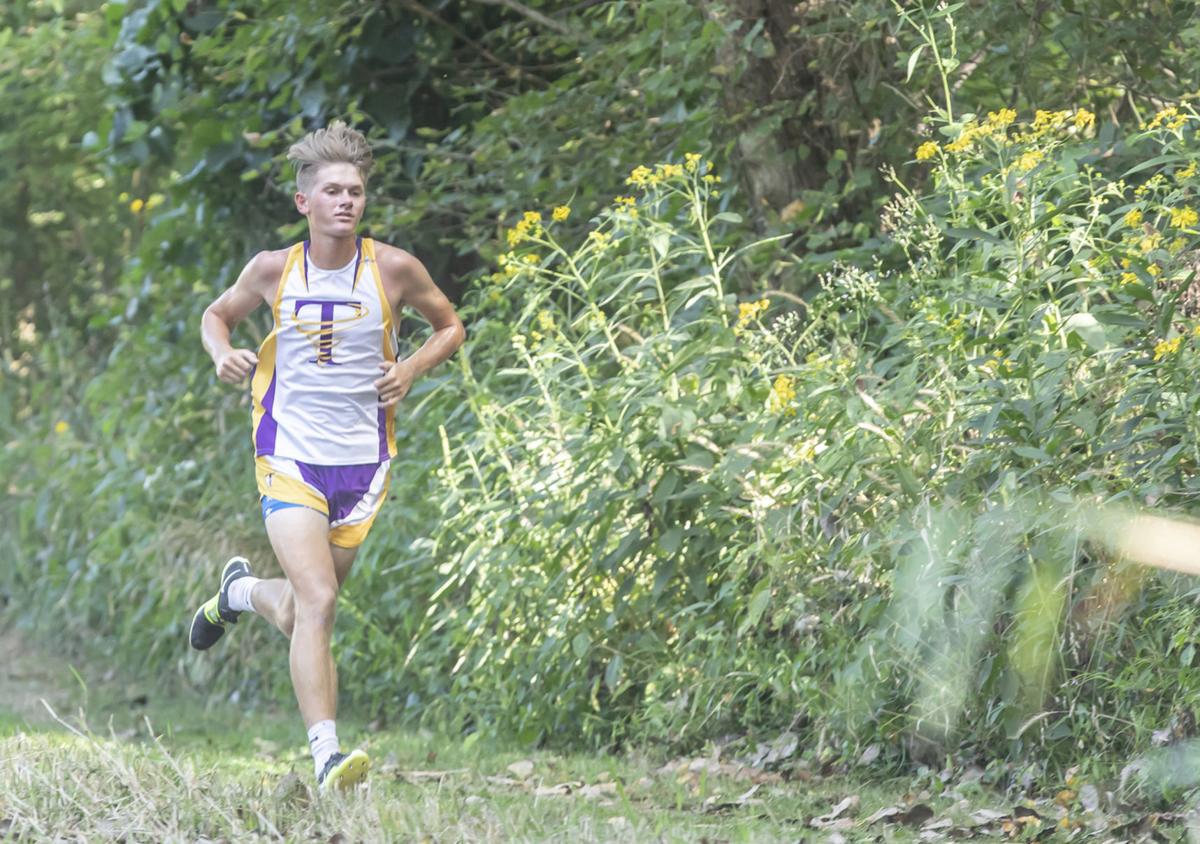 MOUNT ZION — As Taylorville cross country runner Chris Cherry was approaching the starting line at his first meet of the season on Friday at Fort Daniel Conservation Area near Mount Zion, it suddenly hit him that something felt different.

"I really noticed that it had been a while (since my last competition) without that track season," Cherry said. "I'm not going to lie, I did not see the cross country season happening this year. I am very happy that we do have a season and I'm very thankful. I'm ready to go."

He finished 10th at the 2019 Class 2A state cross country meet but lost his track season to the COVID-19 pandemic. Cherry was setting himself up for an excellent outdoor track season by dominating the indoor 3,200 meter events before March's shutdown. He grabbed first place finishes at the Mount Zion Indoor Invitational as well as the the Apollo Conference Indoor Meet and continued to work hard as events were cancelled.

"Chris is in the best shape of his life this year," Taylorville boys and girls cross country coach Steve Walters said. "This time off has given him the chance to get a lot of extra miles in and he has been fully concentrating on speed lately. He has been doing weight training and a lot of long distance running when the outbreak started and the good thing about that is that he has logged those miles and we can pound away at the sprints."

For the first race of his senior season, Cherry had individual and team goals but the hot and humid weather that pushed 90 degrees on Friday wasn't cooperating.

"I definitely wanted to come out as the leader there in front of our new freshmen guys," he said. "That was a big goal. Second goal was definitely personal, trying to get under the 16-minute mark and try to get back into my state gear. We've got five new freshmen who were really good for the two-mile in junior high and so they are adding in that extra mile and trying to kill it. There are only two seniors on the team which is a little hard with the leadership with a bunch of new guys but we are getting it done."

Cherry ran a 16:25 on Friday, a mark that put him nearly a minute ahead of Olney Richland County's Gavin Kirby who was second at 17:20.

"Chris' goal was to come out and take the initial lead and we knew there was competition with some of the Olney runners," Walters said. "(Chris) is at the top of his game. He was at 4:50 for his first mile and I was at the halfway point and he turned and had a conversation with me. That's where he's at right now — a very smart and very comfortable runner. As a freshman, he was a fast runner but now he is smart fast."

The boys and girls events were run with staggered starts to accommodate the social distancing requirements.

"Watching the girls race, it was a lot different than I was used to. But for the boys race, being out in front didn't feel any different," Cherry said. "It was a good race but nowhere near where I can get to this year. It was just so hot and humid and I was on a course that I've never run before. I'm excited to see my teammates times and see where we are as a team and I'm so excited for the rest of the season."

In a normal year with a state series, Walters is certain Cherry would contend for the state title.

"Last year, he was top 10 at state and it is very unfortunate that he can't go out there because he was probably a potential candidate for 1, 2, and 3. There is no doubt in my mind," Walters said. "Not being able to get that and going out as a senior is a bad thing. But we can hopefully come back in track season (next summer) and make up some ground there as well."

Cherry has set his focus on the regional competition and getting a little bit of revenge a year later after finishing second at the 2A Jacksonville regional.

"There is one big guy for regionals and that is Rochester's Matt Herren and that's who I'm really looking at. He got me last year," Cherry said. "My workouts are the most intense I have ever been. I really got on the weights this year and put on about five pounds. At the start and the finish, that is really where you need the muscle and that is what I was really going for and I definitely got the miles in that I need."

WAGNER: This should be high school football's opening weekend, but we must wait a few more months

Everything seems so fresh on the first Friday night of the football season, a kind of freshness that washes away the nothingness of summer in …

At the start of the 2019 cross country season, not many people anticipated that Olney Richland County's Tatum David would go on to be a Class …

Conn: Those Friday night lights of the football season will shine again 🏈

More than ever, the fall sports season in the Illinois High School Association will be about numbers with an infusion of creativity.

Clinton senior Ethan Black has a secret training location that has helped him prepare for his senior cross country season.

Taylorville's Chris Cherry warms up before the start of a cross country race Friday at Fort Daniel Conservation Area.

Taylorville's Chris Cherry warms up before the start of a cross country meet on Friday at Fort Daniel Conservation Area.