DECATUR — Although the cold and windy conditions limited the St. Teresa offense to just six passing attempts during Saturday's Class 2A football quarterfinal, it was also perfect conditions for the Bulldogs defense to stand in the way of Pana's standout quarterback Max Lynch.

The Panthers' offense scored 12 points — their lowest production since Week 1 of the season — and were kept off the scoreboard entirely in the second half, falling 37-12. Over their 10-game winning streak entering Saturday, Pana had been averaging 44 points a game.

"The cold weather, we love it. We couldn't have asked for a better situation to play an All-Stater like Mr. Lynch," St. Teresa defensive coordinator Brit Miller said. "I'm excited to see him play in the future because I think he can play at that next level. Cold and windy is never good (when you are quarterback) because the turf hardens up on you a little bit and he took some hits. I give him all the credit because he got up when a lot of kids wouldn't have."

Led by senior Amare Wallace with 13 total tackles, Bulldogs senior Elijah Wills had six and scooped up a Lynch fumble in the third quarter that set up a St. T touchdown on the ensuing drive.

Wills and Brycen Hendrix also picked up some rushing opportunities as senior standout running back Royce Harper was limited for much of the game, still battling an injury from last week's matchup with Athens. Ja'Carrion Jones led the Bulldogs with 152 yards on the ground and two scores.

"We have a play called Dallas where I shoot two gaps over and the quarterback went in and I stripped him and got the fumble back," Wills said. "We had a great game plan today and everybody executed. I had to step up to the plate and I have put in the work this season. It's the next man up and I have to put the team on my back."

Wills earned the wrestling championship belt given to the top defensive player of the game. Miller said he sees a bright future for the senior to play on in college.

"EJ is special and I think he is a guy that will be able to play at the next level. I think he can be a linebacker at a bigger program, but for us right now, he is a defensive end," Miller said. "He does a great job and he is a leader in practice. He brings it to the game and he has led us all year and all offseason. I can't say enough good things about him."

Harper's absence was also felt on the defensive side, where he is a middle linebacker. Junior Monty Snyder stepped into Harper's shoes on defense.

"Royce is steady and at that position, he's got to understand a lot of different things. Royce has played a lot of football and we missed him today," Miller said. "(Head coach Mark Ramsey) has been preaching that it is the next man up and Monty did a great job. Royce definitely helped us get here and we're looking for him to get back next week."

Another big year for Lynch

Lynch was battling a shoulder injury sustained in the Panthers' Round 2 playoff game. Against St. Teresa, he was 2-for-6 for 22 yards passing. On the ground, he was limited to 125 yards and one touchdown. It was Lynch's lowest rushing total since being held to 77 yards in an opening night loss to Vandalia.

For the season, Lynch finished with astronomical offensive numbers. He led the Herald & Review coverage area with 2,501 rushing yards and 30 touchdowns. In the passing game, he had 1,430 yards with 15 touchdowns and just two interceptions. In total, he had 3,931 offensive yards and 45 scores.

Up next for St. T

St. Teresa advanced to the 2A semifinals for the third consecutive season the playoffs have been offered. The Bulldogs host No. 2-seeded Johnston City (12-0) on Saturday at 3 p.m.

"Our defense is just full of talent. Like a lot of defensive coordinators, I'm fortunate to have the amount of talent that we have and they just play hard day-in and day-out," Miller said. "I think it takes a special kind of person to look at the man across the line and say I'm going to stop you from doing what you want to do. We have a whole bunch of those guys that are willing to dig in and do that."

Maroa-Forsyth quarterback Kaiden Mauer dominated both sides of the ball on Saturday as the Trojans advanced to Class 2A North Bracket semifinals with a 21-7 victory over Rockridge on the road.

Maurer completed 14 of his 15 passing attempts for 150 yards. The junior was also the team's leading rusher with 74 yards on the ground and two touchdowns. On defense, Maurer grabbed two interceptions, including one late in the fourth quarter that sealed the victory.

"When we needed him at both sides of the ball, he stepped up. He flies around from the safety spot and had two picks as they were driving. He threw the ball well in somewhat tough conditions," Maroa-Forsyth head coach Josh Jostes said. "Our defense was outstanding all day long and our offense got stopped a couple times in the red zone, which hasn't really happened this year. A win is a win and hopefully that was an anomaly."

Trojans running back Aiden Riser also had 74 yards rushing and a touchdown. Receiver Zayn Giles had six receptions for a team-high 62 yards.

The Trojans have made the semifinals 11 times in the last 20 seasons. They face No. 6 seed Downs Tri-Valley (10-2) on Saturday at 1 p.m. on Boyd Field in Maroa.

Tri-Valley defeated Knoxville 46-22 in the quarterfinals. The Vikings upset No. 3 seed and defending Class 2A state champions Wilmington in Round 2 of the playoffs 28-21.

"(Downs' game against Wilmington) was a heck of a ball game and both teams were super physical. (Downs) forced (three second half) turnovers against Wilmington and that was the difference," Jostes said. "Their tailback Blake Regenold broke the 2A record for rushing yards in a playoff game with 417 yards on Saturday. They have a lot of weapons but we are glad to be at home. That's where a No. 1 seed should be. We are glad we got it."

If both St. Teresa and Maroa win next Saturday, they would meet in the Class 2A championship game played on Friday, Nov. 25 at 1 p.m. at the University of Illinois' Memorial Stadium in Champaign.

In Class 1A, Tuscola fell to Colfax Ridgeview-Lexington on Saturday, 41-6. The Warriors finish their season 9-3.

Tuscola kept it close through three quarters as Ridgeview led 13-6 at halftime and 21-6 after three. The Mustangs scored 20 points in the fourth quarter to finish with the 35-point win.

Parker James scored the Warriors' touchdown on a seven-yard touchdown in the second quarter.

Photos: St. Teresa 37, Pana 12 in the Class 2A football quarterfinals

St. Teresa's Elijah Wills talks about the Bulldogs' victory over Pana in the 2A quarterfinals

The Big Blue had 235 yards of total offense while holding the Firebirds to 125 yards on Saturday.

The Bulldogs limited Pana quarterback Max Lynch to win 37-12 on Saturday in Decatur.

Illinois had costly penalties and gave up a season-high in points and yards in a loss to Purdue.

Four local teams are in action on Saturday as the football playoffs continue.

Millikin football concludes season on the road at Carthage

The Big Blue are looking to break a two-game losing streak and end the season on a positive note with a win over the Firebirds.

Tuscola football lives the 'next man up' mentality as it faces No. 1 Ridgeview-Lexington

The Warriors travel to Colfax for the 1A quarterfinals matchup on Saturday at 1 p.m.

Check out the schedule for the Decatur Turkey Tournament

The Generals are looking for their fourth consecutive regional title.

Two local teams are in action on Saturday as the football playoffs continue.

Photos: Maroa-Forsyth football practices in the snow to get ready for the Class 2A semifinals

Before a possible showdown with St. Teresa, Maroa-Forsyth focused on Downs Tri-Valley

The Trojans host the Vikings at 1 p.m. on Saturday. The winner would face either St. Teresa or Johnston City in the Class 2A finals.

In Class 2A football championship, it will be St. Teresa's defense vs. Tri-Valley's dominating run game

The two teams collide on Friday at 1 p.m. at the University of Illinois' Memorial Stadium.

Photos: St. Teresa 37, Pana 12 in the Class 2A football quarterfinals

See more photos from the Class 2A quarterfinal game of St. Teresa vs. Pana.

70% of Portugal fans say Ronaldo should be dropped

70% of Portugal fans say Ronaldo should be dropped 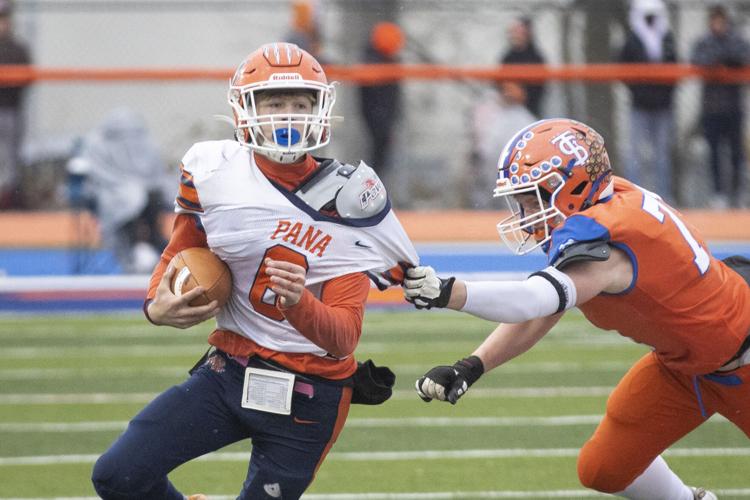 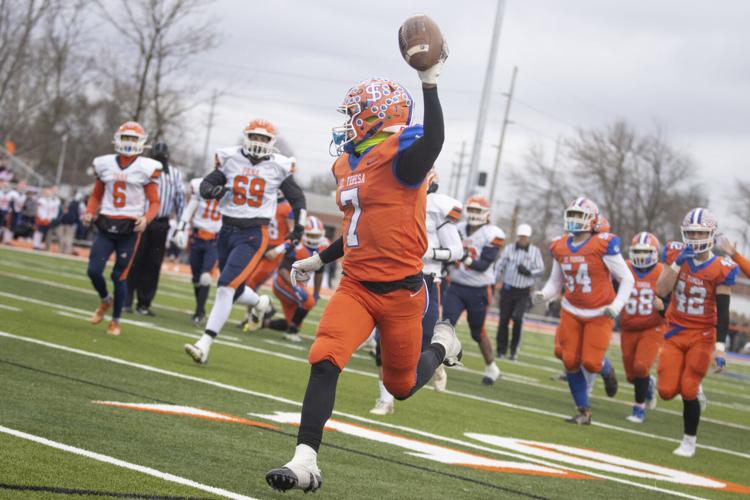 St. Teresa’s Brycen Hendrix runs for a touchdown during the fourth quarter of the Class 2A quarterfinal game against Pana in Decatur on Saturday. St. Teresa won, 37-12. 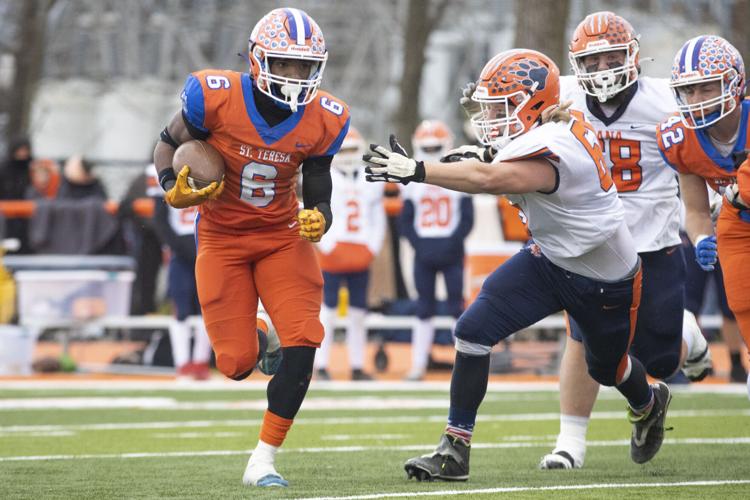 St. Teresa’s Elijah Wills runs past Pana’s Joel Deere during the third quarter of the Class 2A quarterfinal game in Decatur on Saturday. St. Teresa won, 37-12. 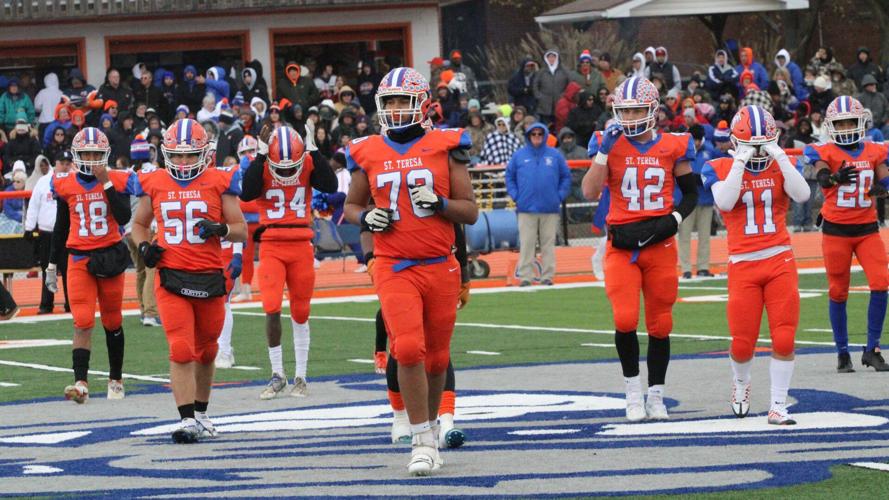 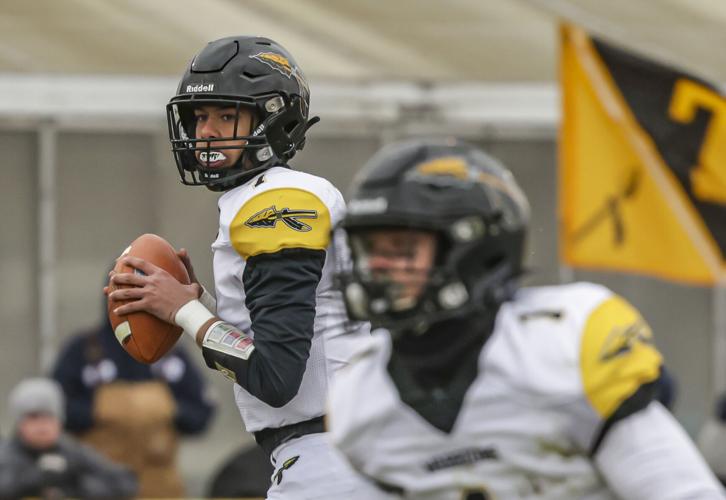