Class 1A state football: Tuscola comes one point, one play from title
0 comments
Share this
{{featured_button_text}}
1 of 8 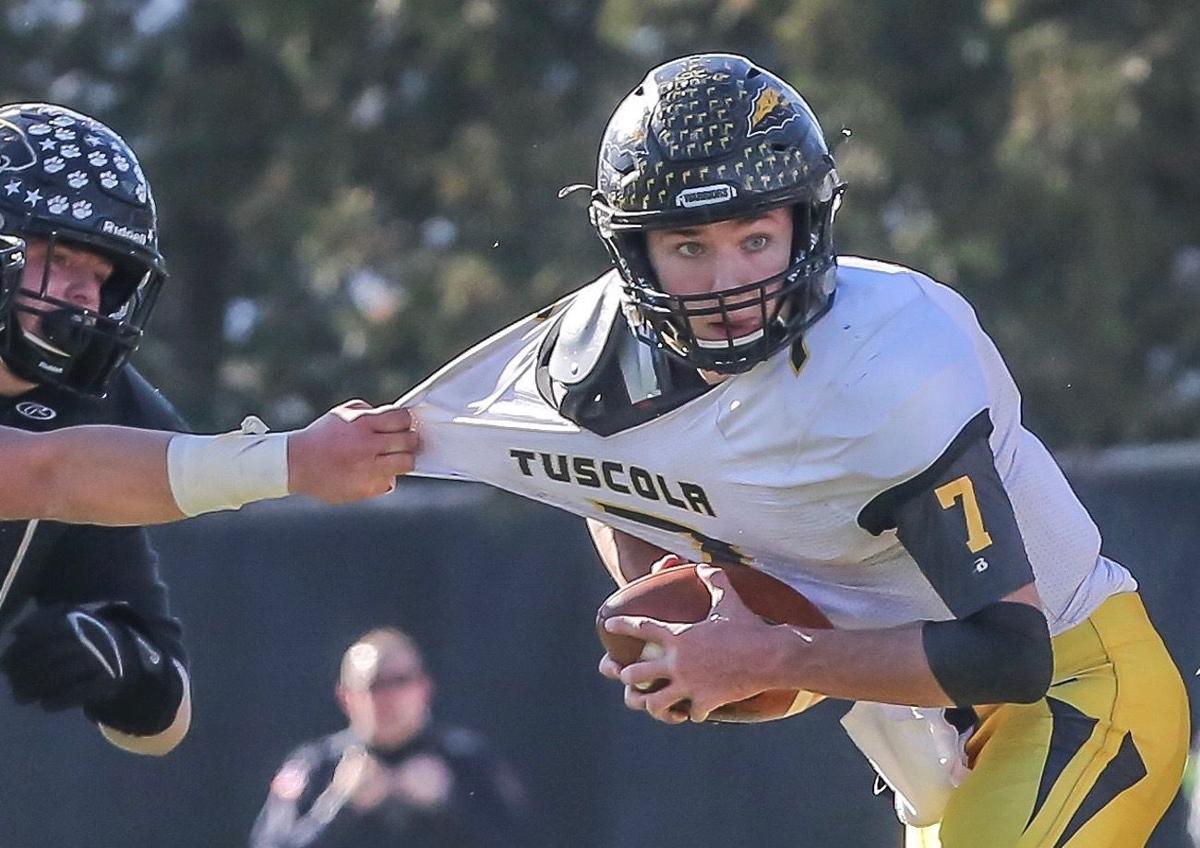 Tuscola's Luke Sluder tries to escape the grasp of a Lena-Winslow defender on Friday. 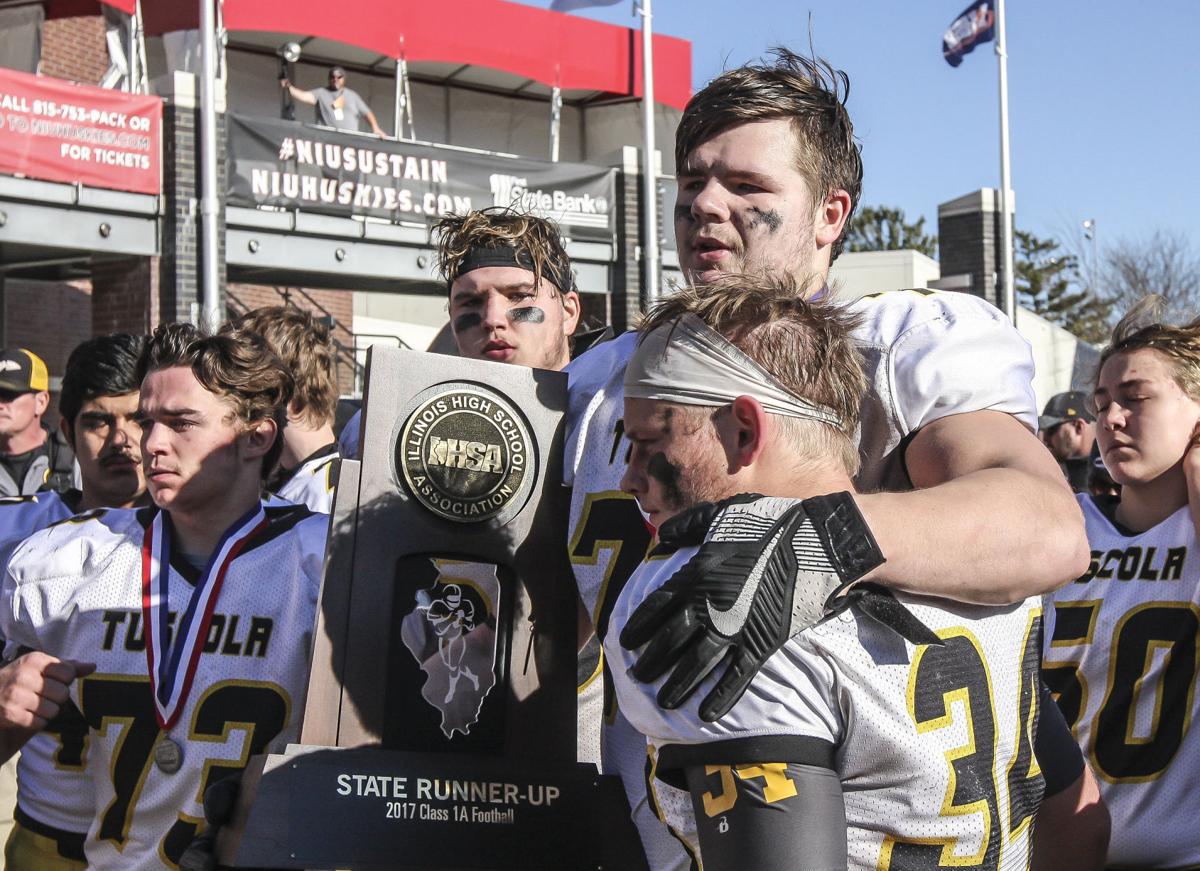 Tuscola's Hunter Woodard (75) has his arm around teammate Andrew Erickson (34) after the game against Lena-Winslow. Online gallery at www.herald-review.com/gallery 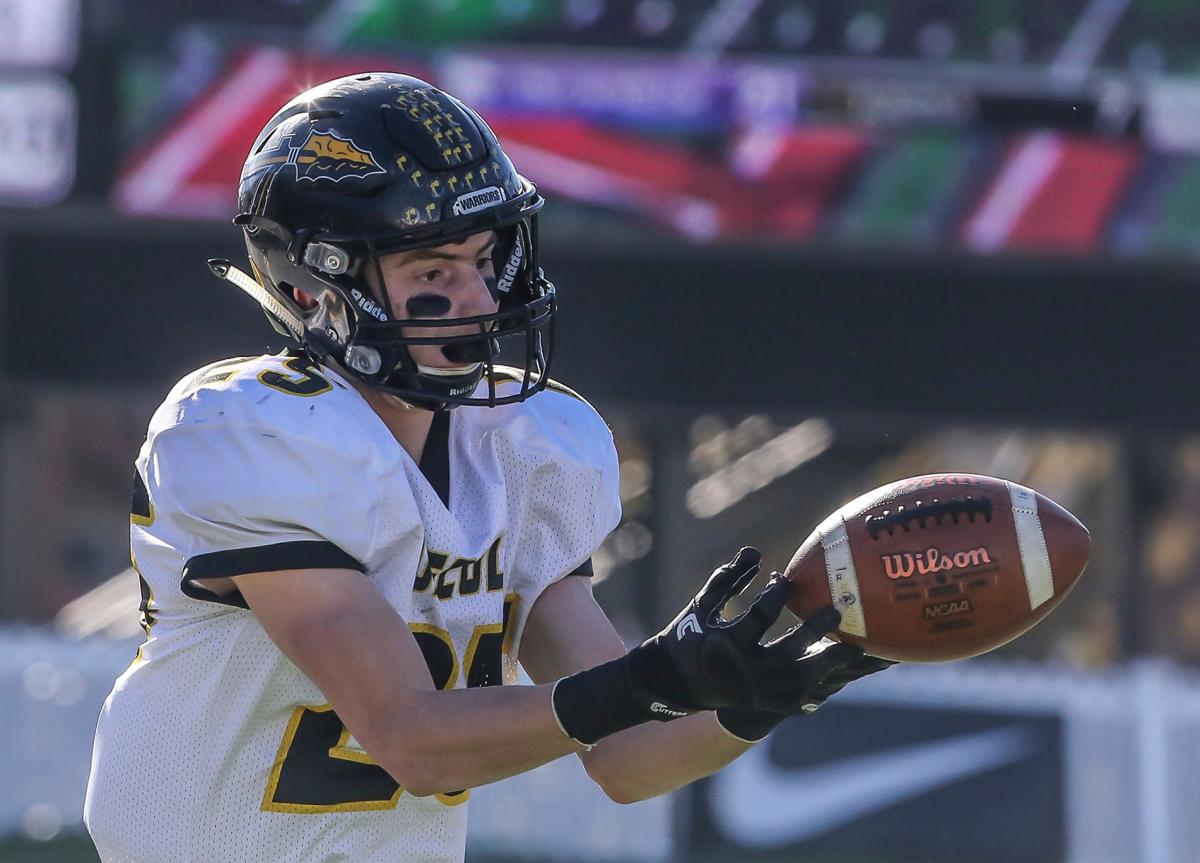 Haden Cothron can't come up with the catch against Lena-Winslow on Friday. 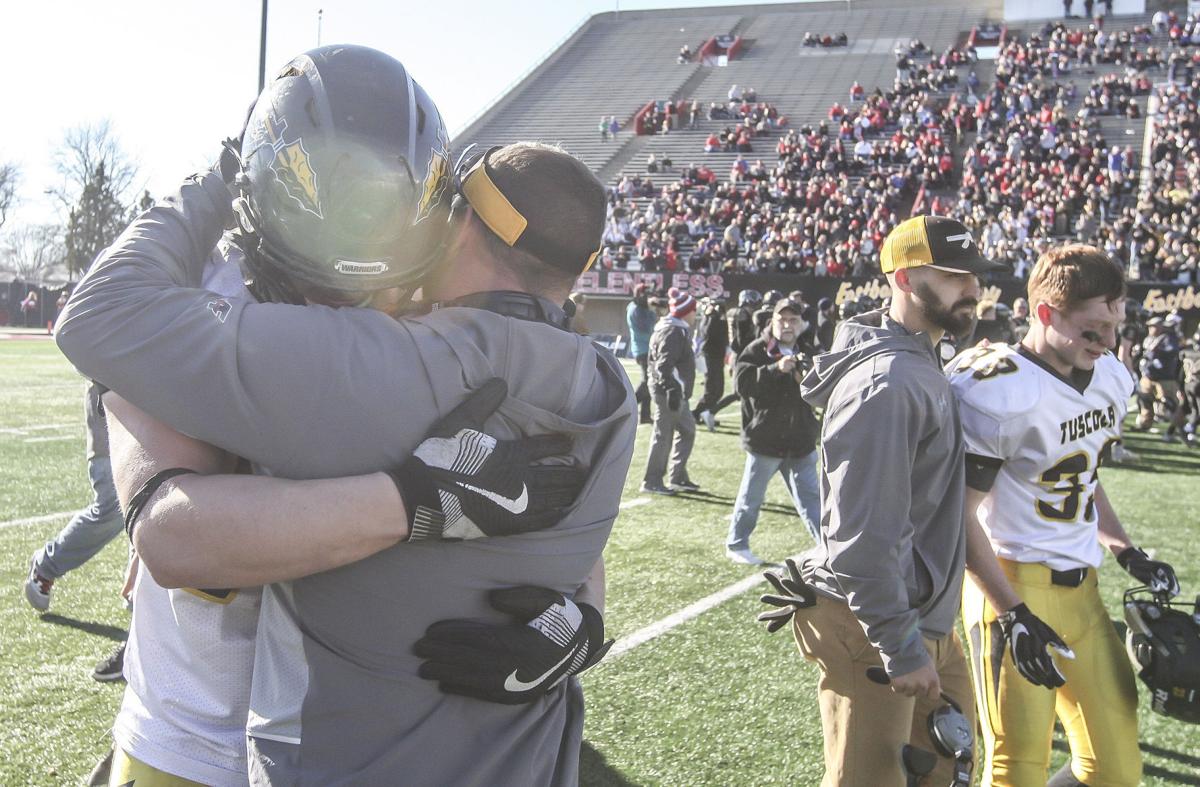 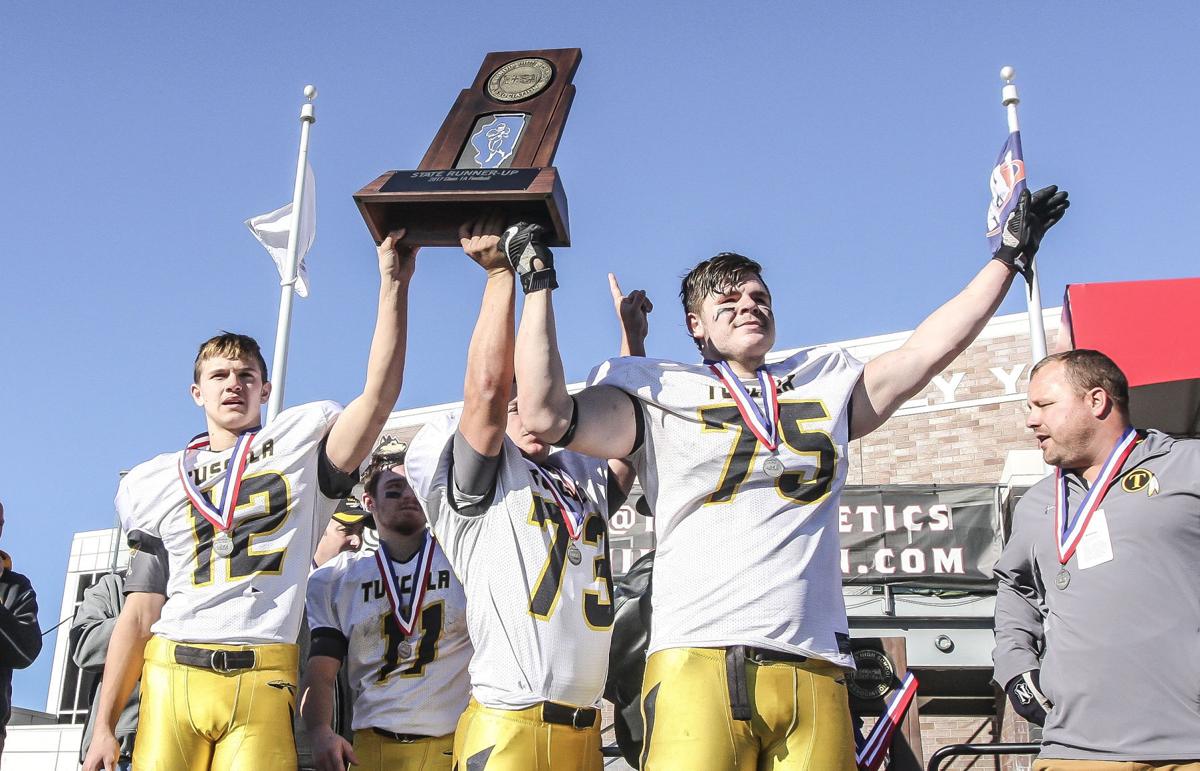 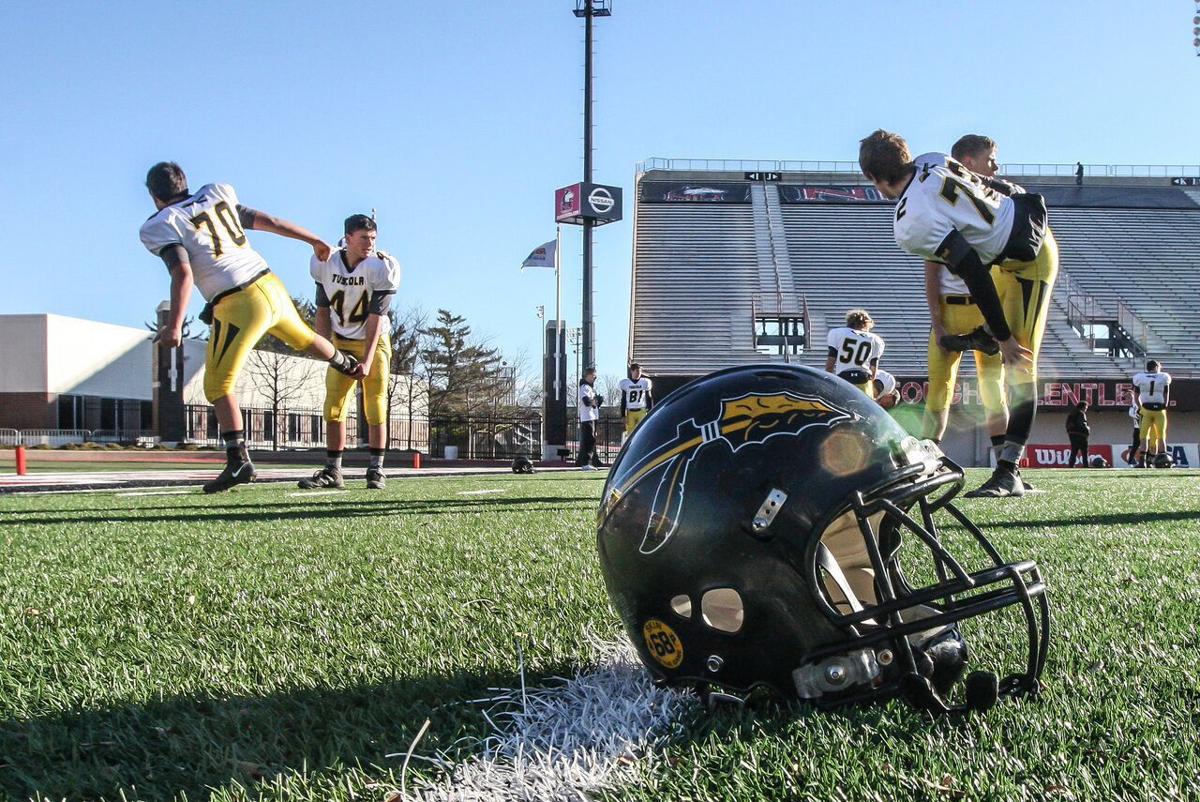 Tuscola warms up before the Class 1A state title game. 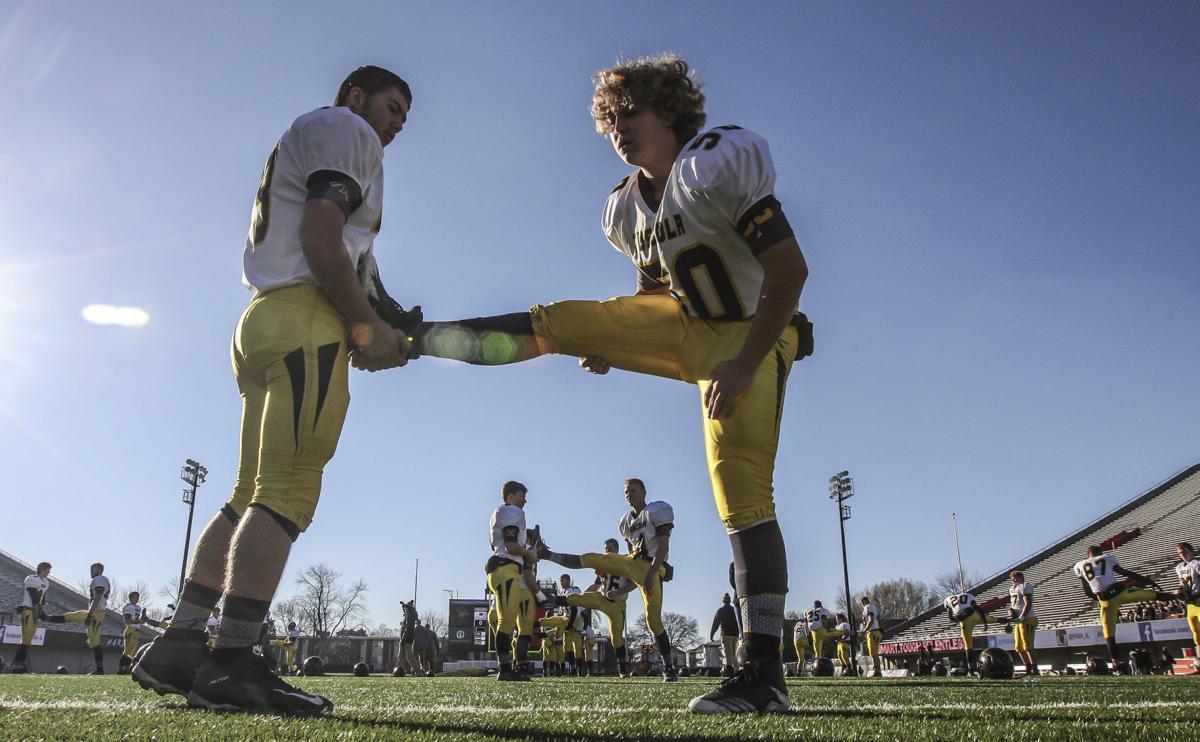 Tuscola goes through warmups early Friday morning before the game against Lena-Winslow in the IHSA Class 1A state football championship game at Huskie Stadium on the campus of Northern Illinois University. 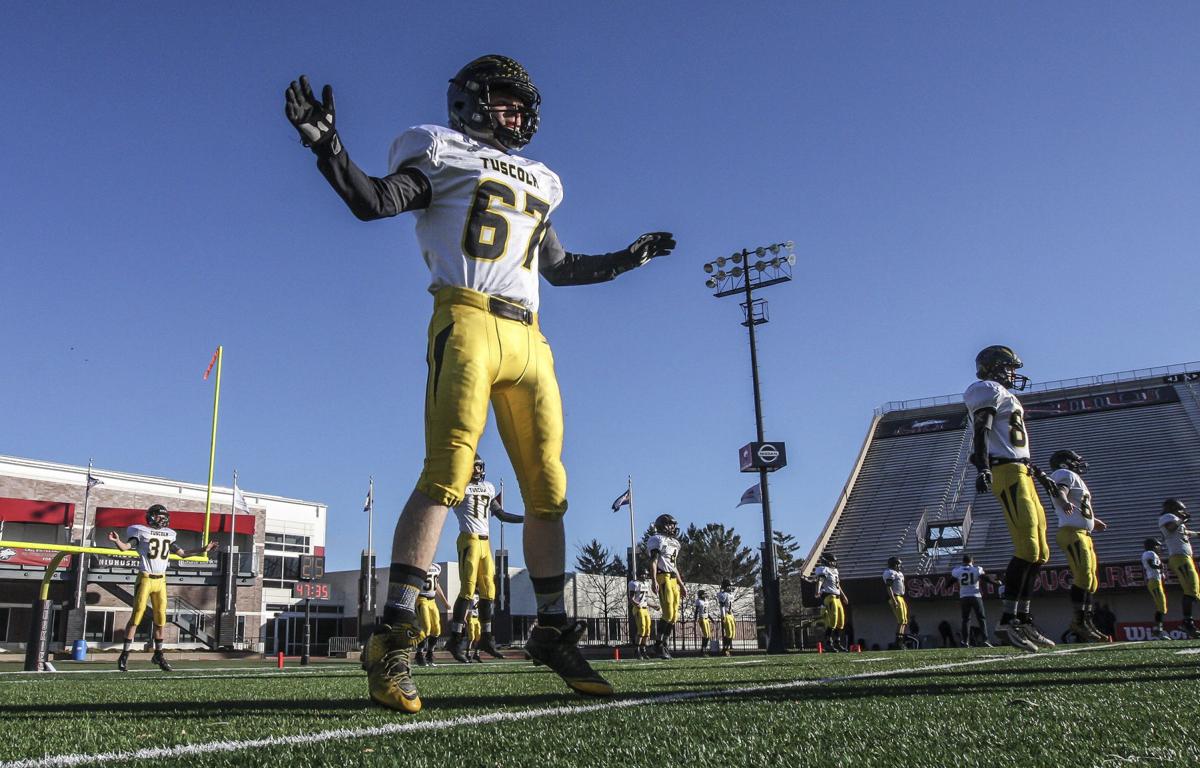 Tuscola goes through warmup early Friday morning before the game against Lena-Winslow.

With Tuscola trailing by one point in the fourth quarter, Sluder was forced out of the pocket and darted down the left sideline to the 29-yard line with 15 seconds left on third down.

He was less than the length of a football from moving the sticks to get into field-goal range.

The Warriors hurried to the line, snapped the ball and Sluder's last-chance hope fell short of his intended receiver in Tuscola's 21-20 loss to Lena-Winslow in the Class 1A state football championship game.

“We really believed if we could have completed that last pass, with a timeout, we were going to call it and trot (Cade Kresin) out there who is really, really, really good and see if we could win it like that,” Tuscola coach Andy Romine said. “It just didn't work out.”

It was a heartbreaking finish after Tuscola had outscored Lena-Winslow 13-0 in the second half after falling behind 21-7 at halftime.

The Warriors held Lena-Winslow to one first down in the second half and used a 4-yard pass from Sluder to Dalton Hoel with 4:57 left in the third quarter to pull within seven, 21-14.

On the ensuing Le-Win drive, Ben Dixon hopped on a Panthers fumble to put the Warriors back in business.

Seven plays later, Sluder found Cale Sementi on a 5-yard TD strike, but the snap on the point after attempt sailed into the arms of Hoel, who scurried left but was stopped short of the end zone by Ty Chrisman.

That point proved to be the game-winner for Lena-Winslow.

“Give Ty credit,” Lena-Winslow coach Ric Arand said. “That’s not a play you practice all the time. He stepped up and made a great play on a great player.”

That was all the Tuscola offense could muster thanks in large part to the defensive front of the Panthers.

Parker Magee, Isaiah Bruce, Ian Kuehl and Michael Jones made up the Lena-Winslow defensive front that combined for 23 tackles, 2.5 tackles for a loss and 1.5 sacks.

Sluder was sacked five times and Bruce, a defensive end, batted three passes down at the line of scrimmage.

“Their defensive front might have been the difference in the whole game,” Romine said. “From guard to guard, we knew their defensive ends were good, but their defensive tackles, especially (Ian Kuehl). We thought we had a hat on a hat and just couldn’t get him blocked.”

Tuscola had size on the line, but overall Lena was bigger than any team the Warriors had played this year.

“Not even close,” Tuscola 6-foot-5, 285-pound lineman Hunter Woodard said. “The closest to them was St. Teresa and even they didn't compare to them.”

Chances to win looked gloomy for the Warriors after Sluder's pass was intercepted with 2:13 left in the game and Tuscola trailing by one point.

But linebacker Will Little had a message for his team. On the sidelines he told Sluder the defense would create one more possession to win the game.

On the first play on the ensuing drive, Lena-Winslow's Rahveon Valentine, who rushed for 144 yards and two touchdowns, fumbled and the ball was recovered by Cade Kresin.

“When Valentine fumbled, it was a final glimpse of hope.” Woodard said. “We had under two minutes left to score and we just weren’t quite able to do it.”

Tuscola struck first, taking a 7-0 lead on a 5-yard touchdown run by Andrew Erickson in the first quarter. But three minutes later Lena-Winslow answered back with a 72-yard screen pass from Chrisman to Bruce.

The next two scores belonged to Valentine, who broke free for a 76-yard run and a 22-yard run to give the Panthers a 21-7 lead at halftime.

“If you go back a little ways, at the end of the first quarter, I told these guys they just played their worst quarter of the year and it was a tie game at 7-7, so obviously at halftime we felt pretty good going in,” Arand said. “I think the third quarter was played on our side even worse than the first quarter was. Their kicking game had a lot to do with it. They had a great kicker to put it in the end zone. It's tough in high school football to start at the 20-yard line against 20 to 25 miles-per-hour wind.”

The Warriors were finding space on the ground with Erickson, who rushed 12 times for 73 yards and a touchdown. The senior barreled through the Lena-Winslow defense, averaging 6.1 yards per carry.

“It was crazy,” Erickson said. “There were a lot of people coming at me and great blocks on the outside and inside. It was just trying to fight through — it was fighting through the heartaches. It’s how each one of those runs were.”

Sluder, a junior, is 6-foot-2, but had four passes batted down at the line of scrimmage. Three came from Bruce, the 6-3 sophomore.

“We had quite a few passes batted down in the fourth quarter,” Romine said. “Their defensive ends are long and good and got up and knocked some passes down, which also is going to make it difficult to run the ball.”

TUSCOLA – When the clock finally ran to zero on Saturday, Hunter Woodard couldn't help but to think back at past postseason letdowns.

Tuscola breaks postseason jinx to get back to state

ATHENS — The final 13 seconds were still ticking off the clock, but Tuscola’s players were already jumping and hugging. They’d waited too long…

TUSCOLA — When Hunter Woodard gets a text from his teammates on Sunday, it's usually a good sign.

TUSCOLA — Luke Sluder wasn't on the field last year when Tuscola got unexpectedly bounced in the Class 1A quarterfinals by Hardin Calhoun.

Tuscola football learns some important lessons off the football field

TUSCOLA — The most important day of Tuscola football's summer workouts doesn't happen on the football field.

"It felt so good finally getting out there and competing against another team and just trying to represent my team."

Tuscola's Luke Sluder tries to escape the grasp of a Lena-Winslow defender on Friday.

Tuscola's Hunter Woodard (75) has his arm around teammate Andrew Erickson (34) after the game against Lena-Winslow. Online gallery at www.herald-review.com/gallery

Haden Cothron can't come up with the catch against Lena-Winslow on Friday.

Tuscola warms up before the Class 1A state title game.

Tuscola goes through warmups early Friday morning before the game against Lena-Winslow in the IHSA Class 1A state football championship game at Huskie Stadium on the campus of Northern Illinois University.

Tuscola goes through warmup early Friday morning before the game against Lena-Winslow.