Football is back: Storylines to watch this season
0 comments
Share this
{{featured_button_text}}
1 of 2 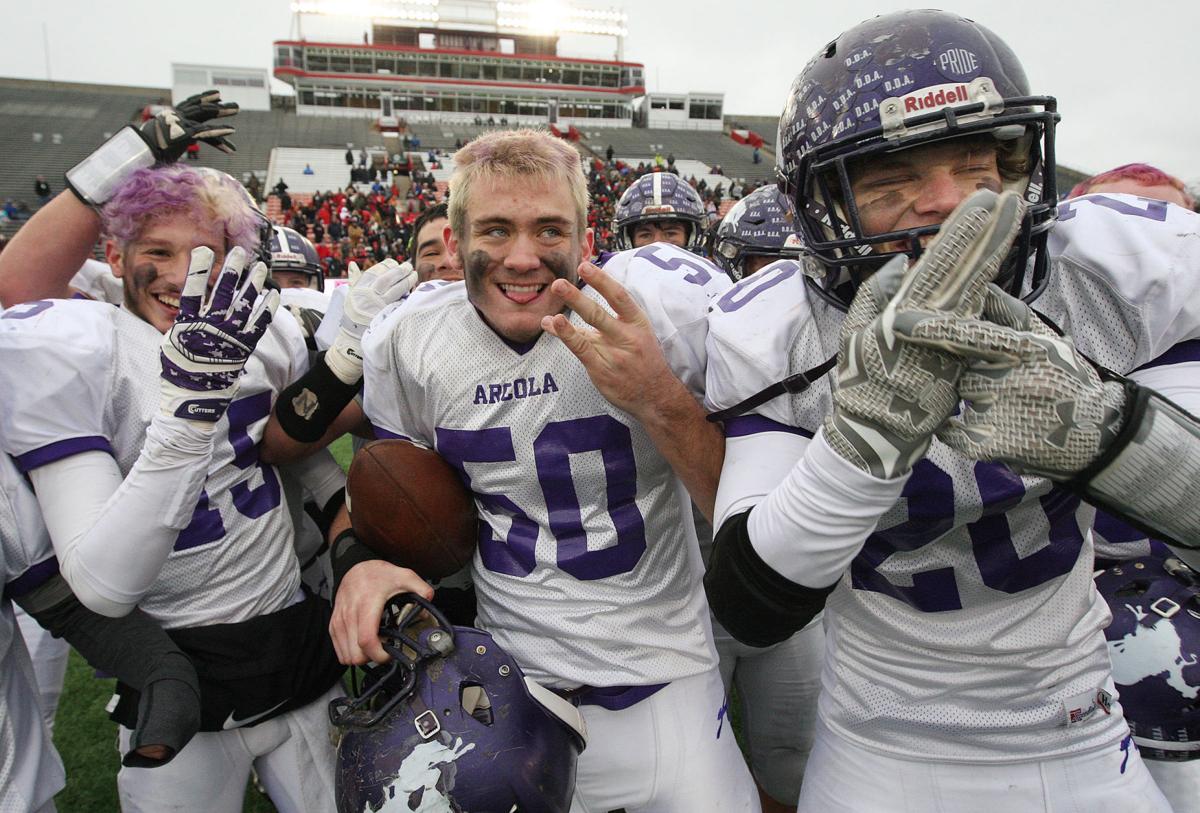 Arcola rolled through the past football season, capping a dominating season with a Class 1A state championship in DeKalb. A number of teams are lined up to be this season's team taking aim at the top trophy. 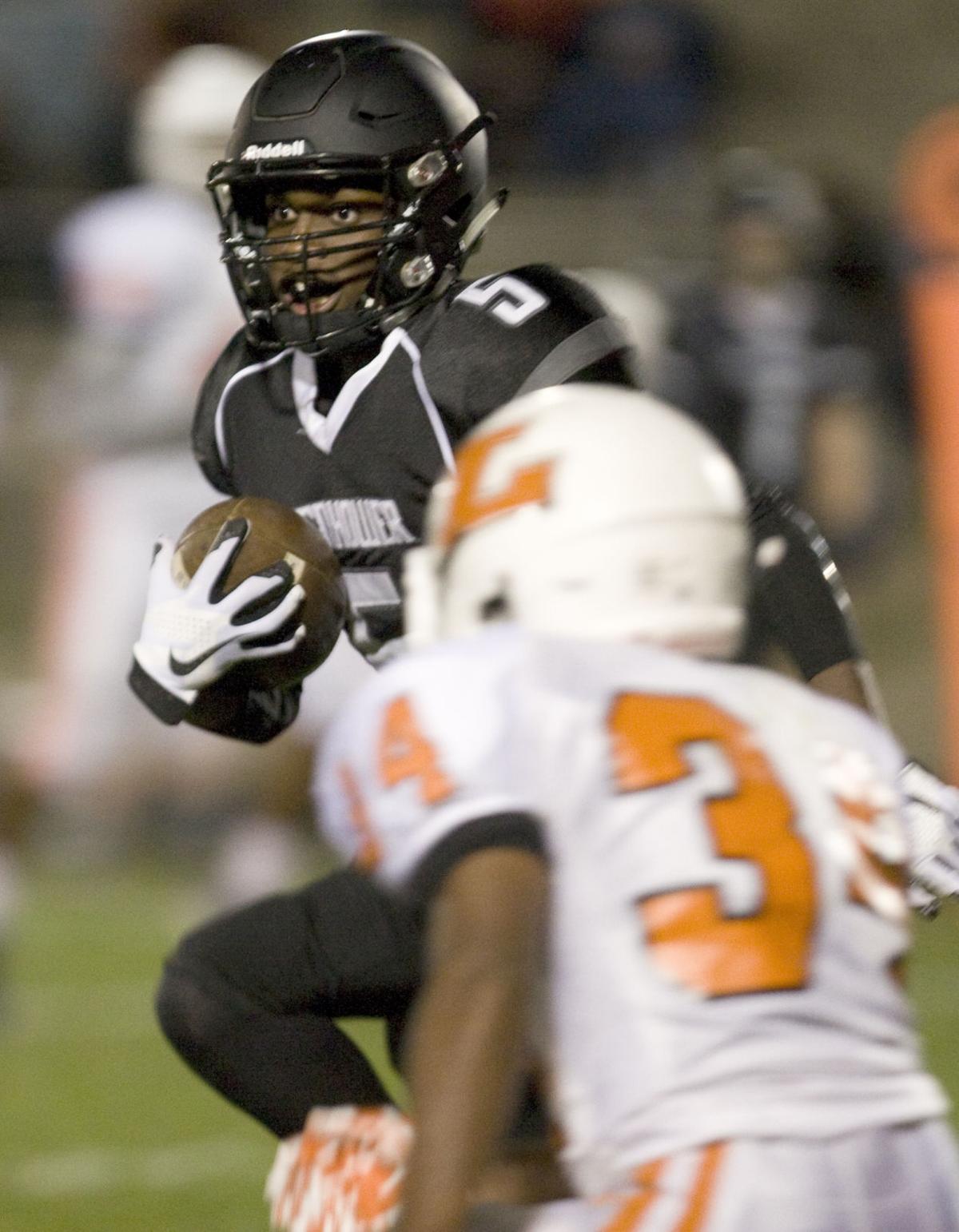 Eric Thomas could be in line to take over as a prime target for Eisenhower quarterback Caleb Dehority.

Nothing in high school sports comes close to the excitement football creates.

Last year produced some unforgettable moments as Pana, Newton, Taylorville, Tuscola and Arcola all finished the regular season undefeated -- Arcola, of course, turned that into 14-0 and a state championship.

Eisenhower broke one barrier after another, including winning its first playoff game since 1992, and LSA made the playoffs for the first time in school history.

There's plenty of storylines we have our eye on this season, but there are sure to be some unexpected feats throughout the year.

Practice started Monday for football teams. Here are some storylines to watch out for as the season kicks off in less than three weeks:

What Cayleb Dehority and the Panthers' offense pulled off last year was unprecedented for the program.

No Eisenhower program scored as many points in a season (463, the previous high was 308), and a big part of that was Dehority smashing the Panthers' passing records at the school as a junior.

Even with leading receiver and Dehority's wingman Colton Lockwood now graduated, there's potential for an even bigger aerial attack. Dehority only threw 254 attempts for 2,710 yards. While the yardage total was second-most in the area, the attempts ranked fourth. His completion percentage was 65.3 percent, an elite mark for a high school quarterback.

And while Lockwood may be gone, there are plenty of receivers who already have a rapport with Dehority. Stephon Bobbitt (29 catches), Stefon Jarrett (26) and Eric Thomas (17) are seniors.

There are eight new football coaches this season, and most of the programs have high expectations for the season.

Vandalia (Jason Clay), Pana (Trevor Higgins), Shelbyville (Bill Duckett) and Nokomis (Paul Watson) all are new at the head coaching spot but have spent plenty of time within their programs.

St. Teresa (Mark Ramsey), Lincoln (Matt Silkowski) and Mount Zion (Patrick Etherton) are all new to their programs, although Ramsey has some familiarity after coaching against St. T.

That leaves Charleston, which now has defensive coordinator Tyler Hanner with the interim title after Tim Hogan resigned on Monday.

Shelbyville, Pana and St. Teresa all made the playoffs last year, and are expected to be as good, if not better this season. Vandalia was close to a playoff spot last year, and should vie for one in 2016.

This could be the best year for Decatur football, ever.

St. Teresa feels like a 1A powerhouse. Eisenhower's loaded for a repeat. LSA returns much of the team that made its first playoffs, and MacArthur's young group should improve.

Is that enough? Maybe.

Statistically, by wins and losses, the best year ever was 1992. Zamani Walter and Antwan Perry led Eisenhower to 10 wins and they still own the record for most by a Decatur public school. St. Teresa went 9-0 in the regular season, and Stephen Decatur (7-4) made the playoffs for the first and last time, even winning a couple playoff games before facing Eisenhower. MacArthur went 3-6.

The next two years, '93 and '94, were good as well. St. Teresa's pair of undefeated state championship runs in '74 and '75 were incredible, as was Lakeview's 9-0 season in '65. But other schools had poor seasons in those years.

The chase for the rushing title should be an interesting one.

There are a number of elite running backs returning, and they bring back a majority of their offensive lines as well.

Newton's Mitch Bierman is the clubhouse leader after putting up 2,292 yards on 223 carries last year, the most yards of anyone in the H&R area. Bierman, a senior, returns all but one lineman in front of him.

No one saw more work than Cerro Gordo-Bement's Dalton Grohler, who racked up 1,906 yards in the run-heavy Broncos offense. Clinton's Alec Cooley is back for his senior year as well after amassing 1,802 yards.

And of course, there's St. Teresa sophomore Jacardia Wright, who picked up 1,557 yards, but had at least 71 less carries than any of the other three top running backs.

Depending on his role, Mount Zion's Brandon Price could be in the mix, as could Warrensburg-Latham junior Dionte Lewis.

Maroa-Forsyth is the lone team in new territory this year, moving to the Sangamo Conference.

It's a conference coming off two state berths (Williamsville in '14 and Auburn in '15) after never having a team qualify beforehand. North Mac went undefeated last year, but the hype around the team was that 2016 was supposed to be the breakout year. Athens beat Maroa to give the conference two teams in the 2A quarterfinals, and New Berlin has made three straight playoff berths.

That leaves Maroa having to wade through a decent top half of the conference if it wants to break into the Sangamo elite.

The Trojans, though, are never hurting for talent, and the Sangamo is a step down from the Okaw Valley, which had three of the 3A quarterfinals teams last year. Maroa, with an enrollment of 380, is the second-smallest program in the Sangamo, but the largest, Williamsville, is only at 479.

Although there is little conference movement, the non-conference games drastically change this year, especially for the CIC and the LOVC. Those two conferences will square off nine times in the first two weeks, providing some familiar matchups (Argenta-Oreana vs. old Okaw foes) and plenty of new ones.

The Little Illini had to search far and wide since the conference is nine teams after Edwards County no longer fields a team, and many of the matchups will come with the Okaw. Casey-Westfield will travel an hour and a half to Monticello, and Olney will make the more than two hour drive to play the Sages as well.

Last year, Eisenhower and Clinton both ended 11-year absences from the playoffs, two of the three longest droughts in the H&R area. That leaves only one team that's hasn't made it since at least 2008 -- Lincoln, which last made the playoffs in 1984.

But the Railers' hopes are seemingly at least a year away. A much more likely team to snap that streak is Warrensburg-Latham, searching for its first berth since 2008.

The Cardinals will be young, and even though they have experience, they lose the leadership of linemen AJ Duff and Gabe Kent. But having Dionte Lewis, who averaged more than six yards per carry and set the IHSA single-game record for receiving yards, is a decent place to start.

Diondre Lewis had 500 receiving yards of his own while having the third-most tackles on the team. Second was now-sophomore A.J. Speasl, who started on the offensive line as well.

There are spots to fill on the line and Jacob Napier's shoes at quarterback, but Warrensburg's skill players should make that transition easier.

The Cardinals finished 3-6, but lost games by one point, two points and seven points.

CLINTON -- Will Scott played junior football for six years in Clinton before he got to high school. A year later, all the fun was gone.

Arcola rolled through the past football season, capping a dominating season with a Class 1A state championship in DeKalb. A number of teams are lined up to be this season's team taking aim at the top trophy.

Eric Thomas could be in line to take over as a prime target for Eisenhower quarterback Caleb Dehority.