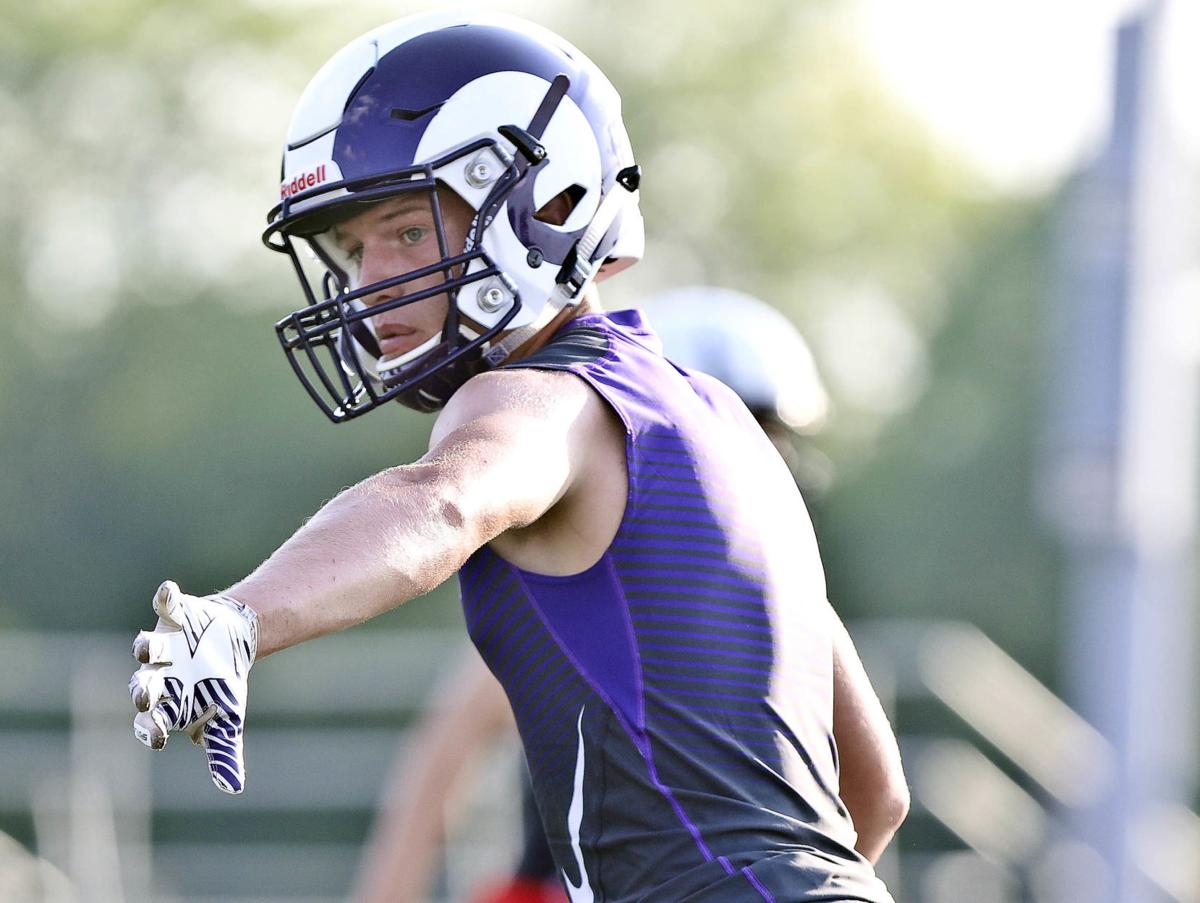 Shelbyville sophomore Rope Hatfield brought a bit of his farm strength to the football field last season and emerged as the team's running back and linebacker. 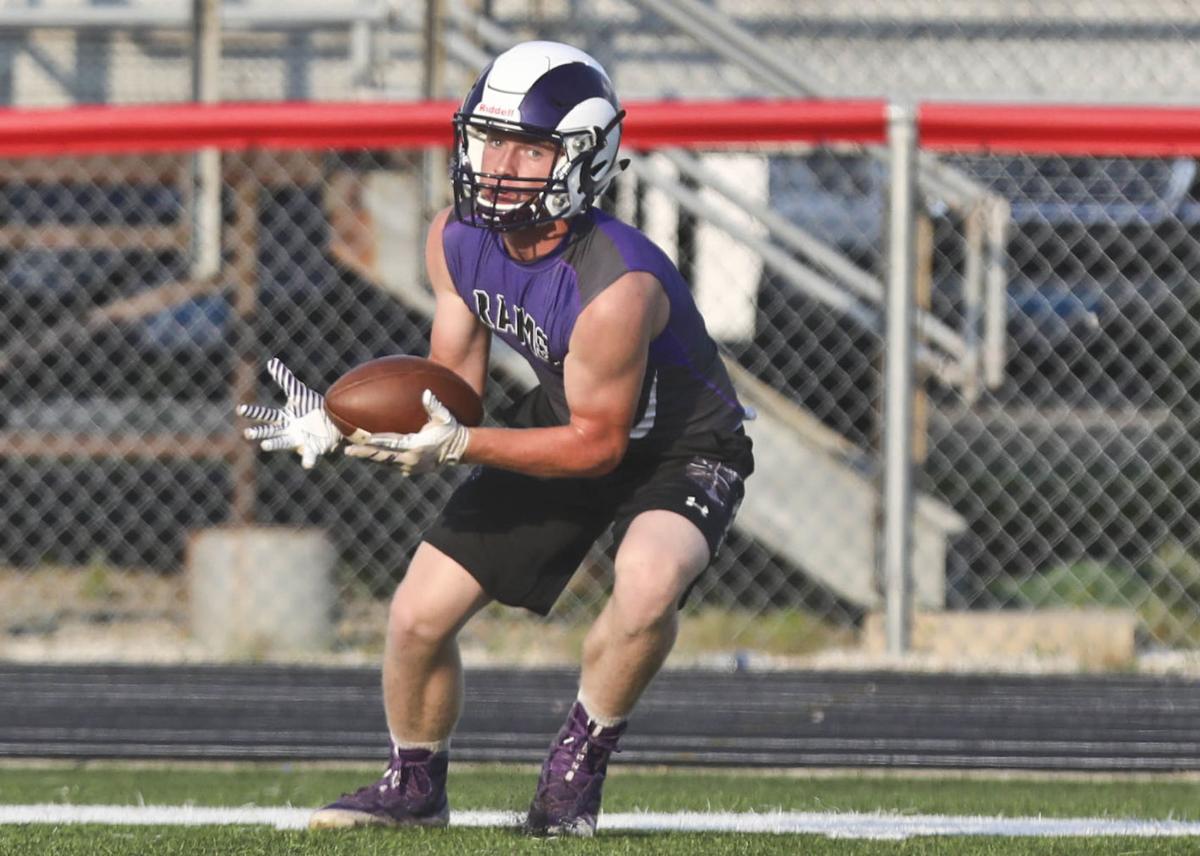 Rope Hatfield, a Shelbyville sophomore, catches a pass during a 7-on-7 camp at Mount Zion on Monday. 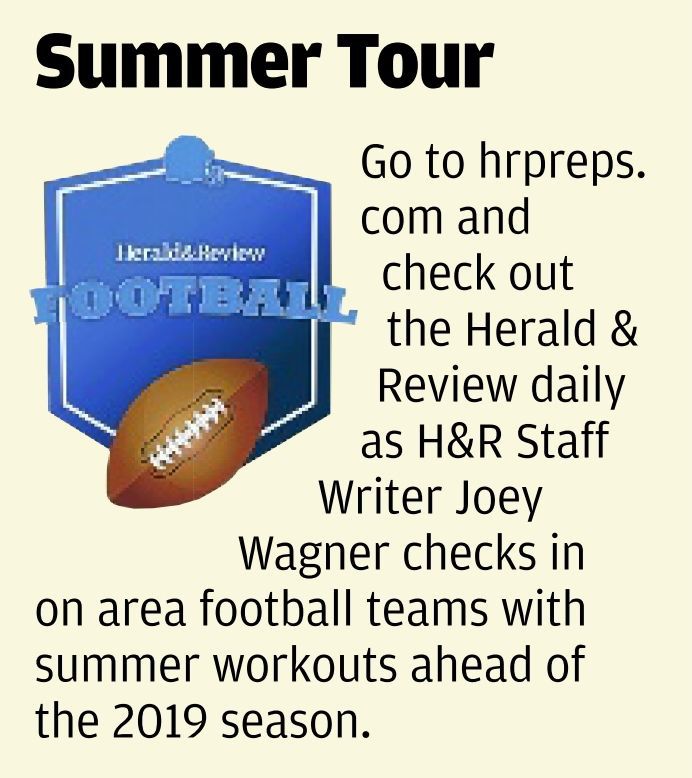 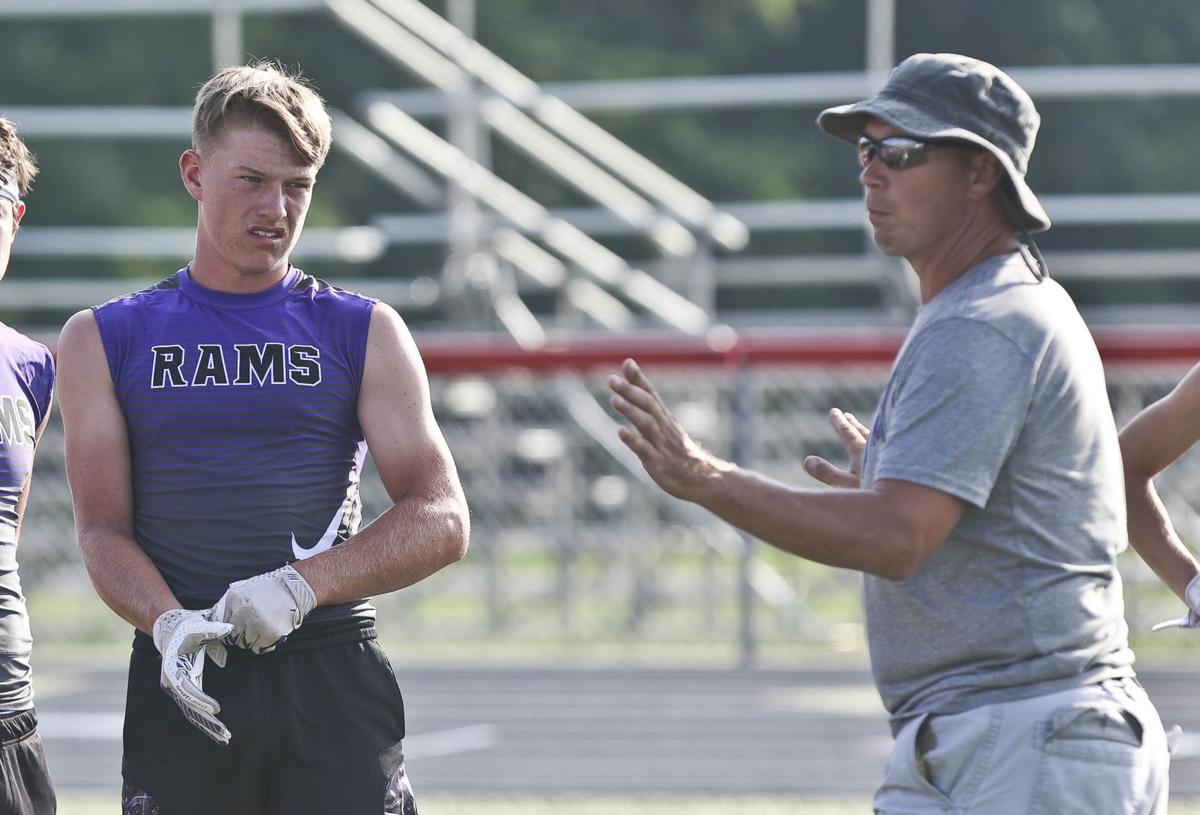 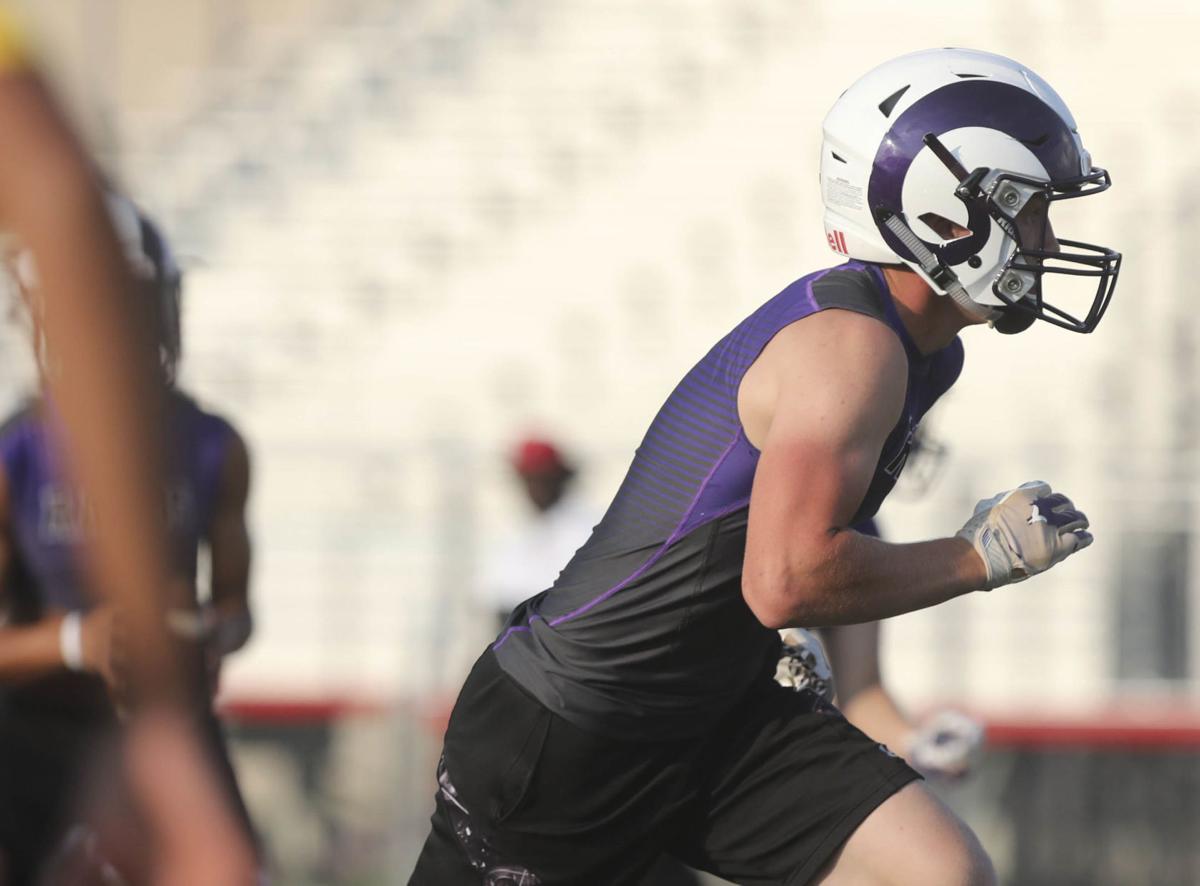 Shellyville's Rope Hatfield goes through drills before the 7-on-7 tournament at Mount Zion High School.

SHELBYVILLE — Maybe Rope Hatfield wasn't exactly sure just how much strength he has packed into his body, but he quickly found out.

Throwing around hay and straw bales from a young age has a way of building plenty of muscle. He's a farm boy who wakes up early and bales hay, tossing around the 88-pound bales about 100 times a day in addition to feeding and moving animals before getting a quick rest in preparation of summer football activities. Thirty minutes and a Gatorade is the current working remedy.

Last year as a freshman he started for Shelbyville as a slot receiver and linebacker and ended up taking a most of the handoffs at running back beginning in Week 5 against Warrensburg-Latham, following an injury to Rams' running back Cade Helton. Hatfield rushed 48 times for 218 yards, had 20 receptions for 185 yards, and added 35 tackles. At first, though, he wasn't entirely confident that his farm strength would translate to football strength.

Then he made a tackle.

“I went in the first game thinking I was going to get my head taken off," Hatfield said. "I went in, made my first tackle and knew I could do it."

Hatfield grew up in the city limits of Shelbyville, but his family has about 20 acres of land outside of town that's been a home-away-from home for the sophomore, who Shelbyville coach Bill Duckett thinks could make an impact this year. Hatfield recognizes that daily work helped him build muscle as he grew up. In sixth grade, when he was playing running back, linebacker and in the trenches, he started to realize that strength translated to the football field.

He wakes up at 6:30 a.m. and is working with his uncle by 7:30 that same morning. Tasks vary each day, but they all involve physical labor. Duckett knew well before Week 5 that Hatfield could help out his team. He saw natural strength, beyond what most freshmen walk into a football season with.

“He’s a farmer," Duckett said. "He’s one of those kids who, if he would have been around 30 years ago, we’d have every kid doing it. That’s what he does every day. He’s up and working early in the morning and he’s getting after it. That translates to the football field."

The Rams did a strength day on the farm that opened their eyes to the work Hatfield puts in each day.

“I kind of got some crap for being country, but once they realized what I actually did, they kind of changed their mind about all that stuff," he said.

In fact, Hatfield and star quarterback Kentrell Beck had a hay-throwing competition. They launched the bales roughly 15 feet into the air. Beck won.

"Maybe he had a better grip," Hatfield said. "He's also taller than me. Maybe that helped."

No matter, the two will be crucial to the other's success this season. Beck moved from receiver to quarterback and is coming off of a completely lost season as he recovered from shoulder surgery. Hatfield, who is privy to his position as a running back, can take the pressure off Beck, helping both players find space against the defense. On the other hand, 11 defenders on the other side of the ball will be in lockstep to stop Beck, a potential Division I athlete, from torching them with his arm or his feet. That opens the door for Hatfield.

His preference for offense is simple: He gets to run through defenders and score touchdowns — something the Rams hope to do more this season.

“We want to prove to everyone that we’re better this year and it doesn’t take but a couple kids our size to get back into where we were," Hatfield said.

Last season opened Hatfield's eyes as to what he can do on the varsity level, and it reaffirmed Duckett's early impressions on a player who he said "will be a good leader for us for three years."

“Once it came to that second 7-on-7 (last) summer and he was able to come out and compete and be one of our better guys out there, more physical, and he had some good size for a freshman anyway, we knew he was going to be a good player for us," Duckett said.

FRIDAY NIGHT FEVER: Catch up on our preseason football coverage

Christian Keyhea ready to make a splash for Mount Zion

MAROA — Maroa-Forsyth quarterback Ian Benner is transferring to Chatham Glenwood for his senior season, he announced on Friday.

'I felt like it was home for me.' MacArthur's AJ Lawson commits to University of Iowa football

DECATUR — It didn't take AJ Lawson long to know exactly where he wanted to spend his four collegiate years.

WAGNER: It's not too early to look ahead to football season, especially Week 4

Every football season has that week.

The countdown is on: Here's a look at some H&R-area storylines from the release of the 2019 IHSA football schedule

DECATUR — Summer may have only just begun, but the countdown to football season is on.

BLOOMINGTON — It was definitely a play worthy of the forthcoming Most Valuable Defensive Player award.

DECATUR — A juke here, a spin there, a hurdle for good measure and a burst of speed. One look at him on the football field and it's obvious th…

Restoring the roar: Eisenhower football building from the ground up

Steve Thompson, Eisenhower's football coach and athletic director, is trying to re-establish the Panthers' on-the-field success after the program won one game the previous two seasons.

Pana's Bryce Edmiston on the hunt for ankles to break

PANA — At the conclusion of basketball season last year, Bryce Edmiston followed the routine he's been on for his whole high school career.

SUMMER FOOTBALL NOTEBOOK: Kentrell Beck back and now at quarterback for Shelbyville

SHELBYVILLE — After missing his entire junior season following shoulder surgery, Shelbyville's Kentrell Beck is back for his senior season — a…

DECATUR — The passes that Deyon Jackson threw just over the outstretched arms of defenders on Monday night were simply another step in the process.

Here, there and everywhere: Jacob Jones does it all for Meridian football

MACON — Most of the time, Jacob Jones will be lined up in the same spot in the Meridian offense: At quarterback.

Surprise no more: Nate Hayes a dual-threat for Warrensburg-Latham

WARRENSBURG — There's an inherent risk in letting your quarterback unleash his running abilities in practices. Most coaches, especially before…

ARGENTA — Growing up, Braxton Ulrey found a way to tag along with his older brother, Brody Ulrey, anywhere from football practice to backyard …

Wade Jostes taking over at quarterback for Maroa-Forsyth

MAROA — There might be only one person on the planet who has seen as many Maroa-Forsyth football practices as Josh Jostes.

TUSCOLA — At the top of most swimming pools sits a pesky little creature, not big in size but terribly elusive, zipping across the water from …

Brady Borntreger back at quarterback for ALAH football team

ARTHUR — Imagine the feeling swirling around in Brady Borntreger's stomach.

CERRO GORDO — The summer work was grueling, and only partly unexpected.

Jalen Jones is a man of few words, but many plays for LSA football

DECATUR — When Jordan Hopman was hired at LSA in February, he had to fight against distance.

You don't know Jack: Hogan has more to offer for St. Teresa

DECATUR — When generational talents walk through a door and into a football program, it's often best to not overthink things.

TUSCOLA — Logan Tabeling is going to have one year as the starting quarterback for Tuscola.

MONTICELLO — During early football practices last season, Cully Welter had a plan in place for his Monticello football team.

DECATUR — One look at Denim Cook tells the story.

Football season is around the corner. Finally.

Football season is around the corner. Finally.

Shelbyville sophomore Rope Hatfield brought a bit of his farm strength to the football field last season and emerged as the team's running back and linebacker.

Rope Hatfield, a Shelbyville sophomore, catches a pass during a 7-on-7 camp at Mount Zion on Monday.

Shellyville's Rope Hatfield goes through drills before the 7-on-7 tournament at Mount Zion High School.