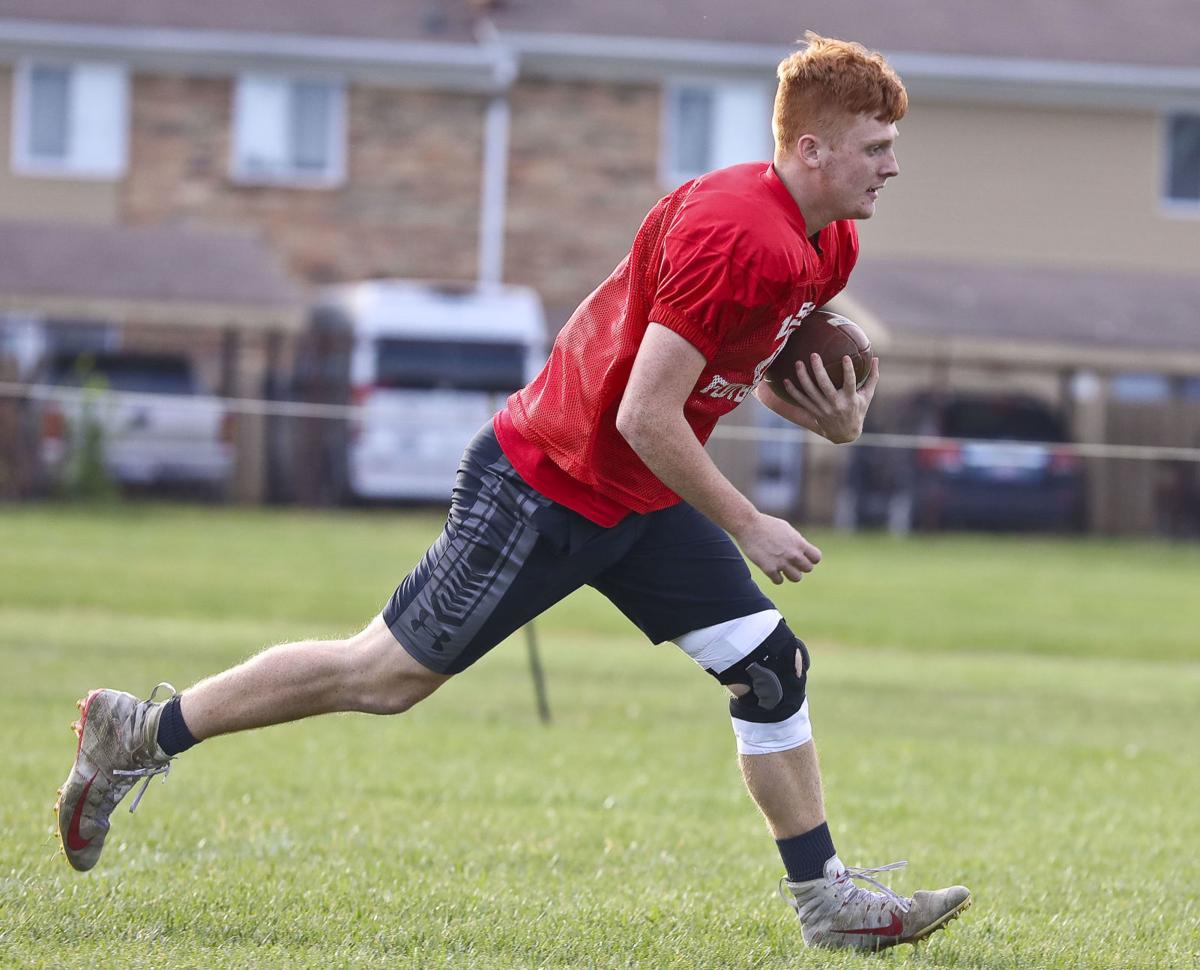 LSA's Coby Crafton runs with the football during practice on Wednesday at LSA. Crafton ran for 133 yards and two touchdowns last in the Lions' win over Farm City Blue Ridge. 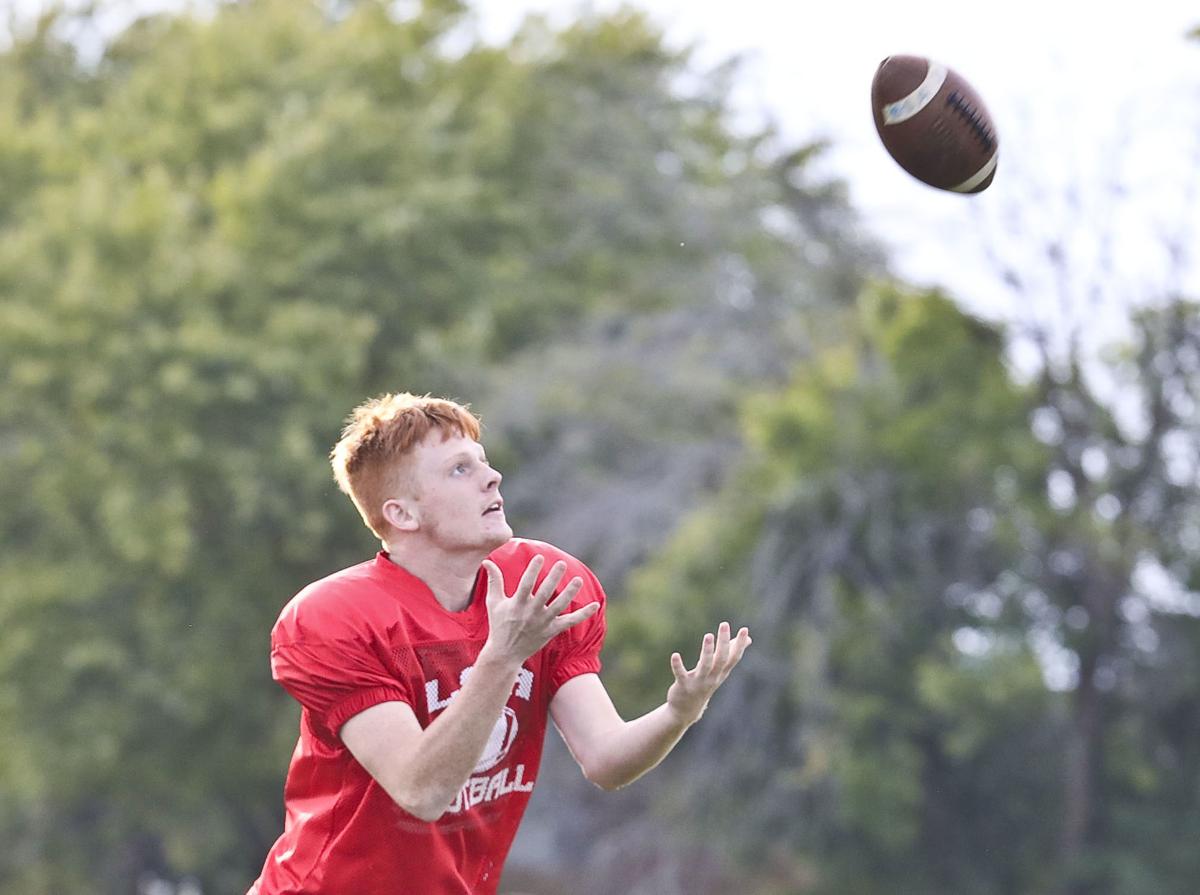 LSA's Coby Crafton catches the football during practice on Wednesday at LSA. The junior running back leads the Lions offense that is nearly entirely devoted to the run. 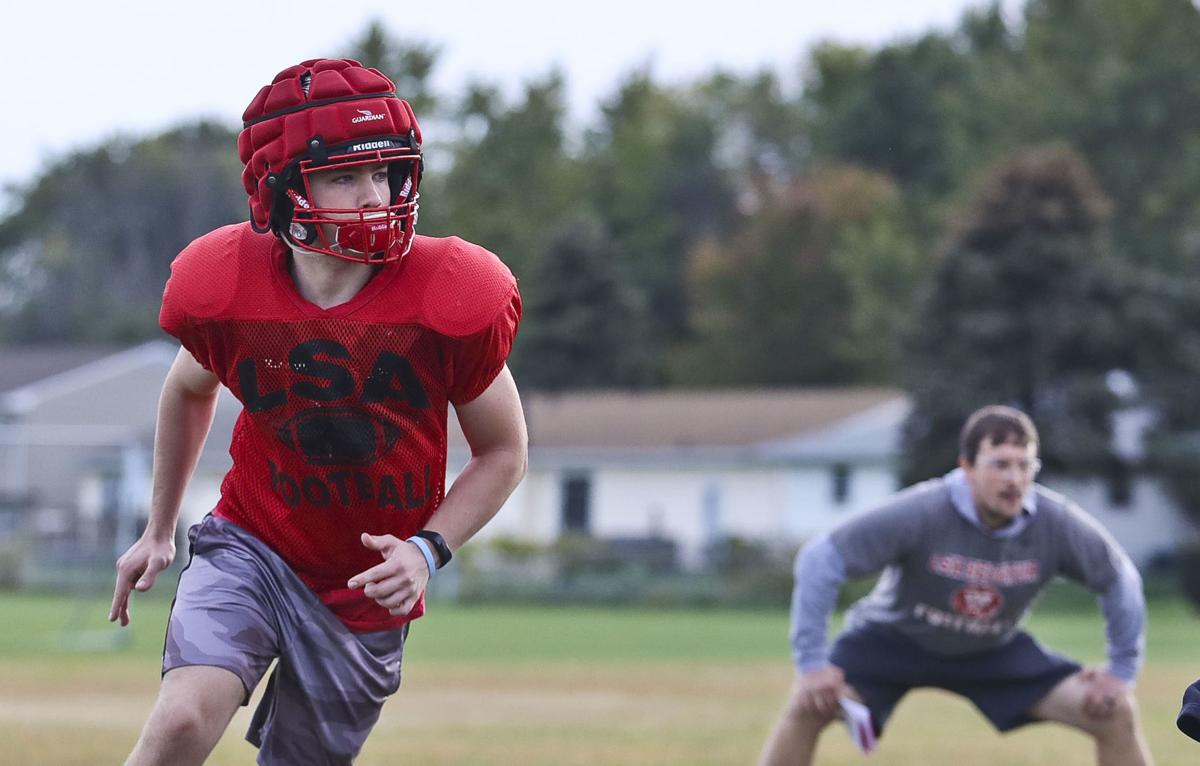 LSA's Issac Fause head for the ball during practice on Wednesday at LSA. Fause is a senior captain for the Lions this season. 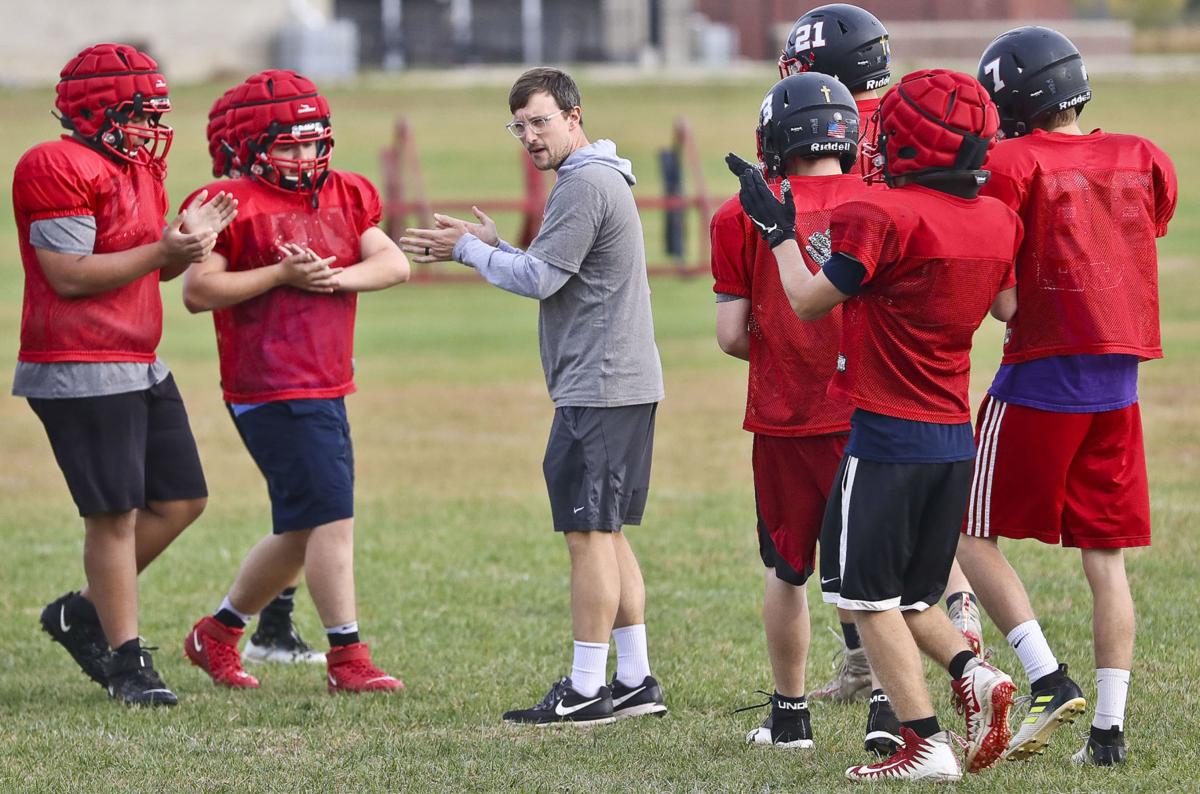 DECATUR — Watching LSA-Mount Pulaski's is a lot like stepping into a time machine back to the first years of football, when the pass wasn't an option and the run was the unquestioned king.

LSA (1-5) threw the ball twice last week against Farmer City Blue Ridge (2-4) and rode the hard work of a collection of running backs, led by junior Coby Crafton, to a 26-6 victory.

"If we were wearing leather helmets, you wouldn’t know what time period it was," LSA coach Jordan Hopman said.

Injuries have decimated an already-thin LSA lineup, as the Lions dressed 19 players last week after starting the season with 26. Both the offensive and defensive lines have completely turned over since Week 1, but for Hopman, it is more than just trying to stop a leak on a sinking ship — he is building a team in the middle of the season.

"We are asking the guys to do a lot. We have nine guys starting both ways so you are asking a ton both mentally and physically," Hopman said. "We have pieced it together but we are not just trying to get through this. We have done a nice job learning and adapting. We have had to change our offense because of who we have lost, and defensively we have been improving each week."

The no-frills Power-T offense arrived Week 3, and since then the offense has scored more points each week.

Crafton was the Lions' locomotive who took 33 carries last week for 133 yards and two scores. As the season has progressed, Crafton has been impressed with how the offensive line has gained confidence.

"Obviously, there is a lot of linebacker blitzing, but the biggest part of (our win) was our offensive line," he said. "We have one senior and one junior on our line, and the rest are underclassmen. Those guys have stepped up and they play against guys that are 40 or 50 pounds heavier than them and they have held their own.

"Last week, they came out of their shells, I think. They realized that they can move a guy who is much larger and it was very impressive."

Crafton, who also plays baseball and basketball for LSA, is unflappable in the face of adversity.

"Coby has been our workhorse,"Hopman said. "Talk about a guy who keeps an even head. He’s got five underclassman blocking for him and he’s getting pounded on for five weeks.

"He took the game on his shoulders last week with 33 carries and they weren’t easy yards and he’s dragging kids with him."

Along with Crafton, running for the Lions are seniors Isaac Fouse and Jalen Jones, and freshman Emmanuel Roughton.

"(Isaac) is my fullback and he really is our only healthy senior captain at this point. (Jalen) made two huge runs for us last week and when he is at full speed, he’s at a different speed," Hopman said. "(Emmanuel) does everything for me. He’s our strong safety, he plays fullback and tailback.

"Without having those running backs we would be in some real trouble."

It is easy to get overwhelmed as a new coach in a challenging season but Hopman doesn't view it that way.

"Any coach will tell you the differences of coaching a freshmen team versus a varsity team and we are essentially doing that at the same time," Hopman said. "This season I have learned to coach younger kids — I have always coached varsity before — and I’ve learned how to coach those kids and I’ve had to learn to be a better coach in every aspect of the game."

As the difficulties have mounted for the Lions this season, the players found inspiration from former players.

“It was a struggle, but we have had no one quit," Crafton said. "No one gave up and we all stuck with it and that’s why we are getting better. That’s who we are. Grant (Karsten) and Mike (Fiala) and the rest of the guys before us, they set that — we don’t quit here. That doesn’t happen.”

Kentland South Newton (IN) at Casey-Westfield

Westville vs. Oblong at Palestine

DECATUR — LSA/Mount Pulaski football's steady improvement on offense this season may have slipped under the radar — until Friday.

DECATUR — It didn't take Coby Crafton to realize what he was in for.

ARGENTA — Arcola started fast and never slowed down, beating Argenta-Oreana 43-6 to open the season on Friday. Though the game wasn't official…

DECATUR — The search for a new LSA football coach came to an end Friday, with Jordan Hopman announced as the Lions' head football coach.

Jalen Jones is a man of few words, but many plays for LSA football

DECATUR — When Jordan Hopman was hired at LSA in February, he had to fight against distance.

TUSCOLA — Logan Tabeling is going to have one year as the starting quarterback for Tuscola.

Running without fear: Chase Woomer and the Effingham rushing attack steps up

TAYLORVILLE — Chase Woomer took advantage of the opportunities given to him on Friday.

LSA's Coby Crafton runs with the football during practice on Wednesday at LSA. Crafton ran for 133 yards and two touchdowns last in the Lions' win over Farm City Blue Ridge.

LSA's Coby Crafton catches the football during practice on Wednesday at LSA. The junior running back leads the Lions offense that is nearly entirely devoted to the run.

LSA's Issac Fause head for the ball during practice on Wednesday at LSA. Fause is a senior captain for the Lions this season.