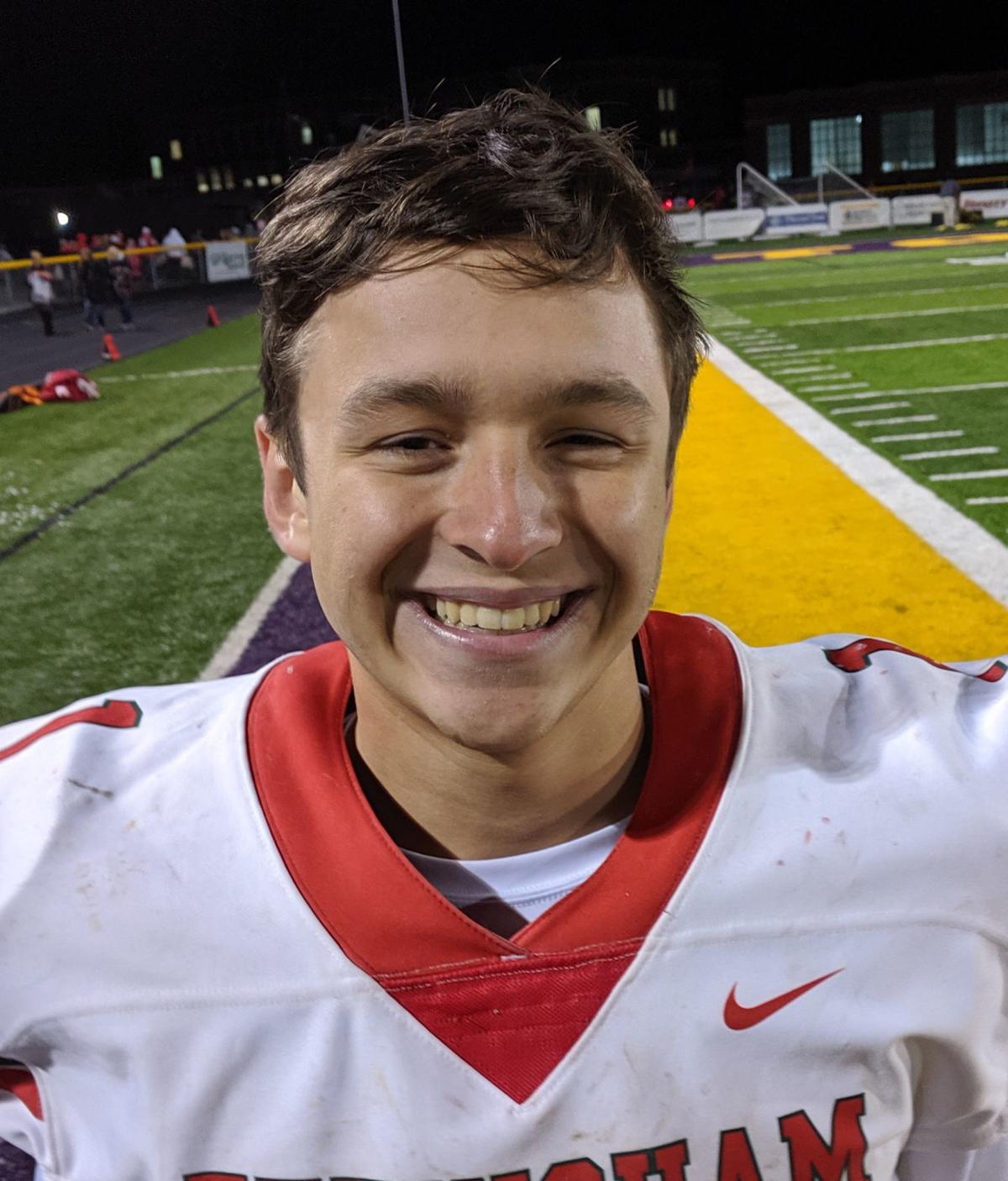 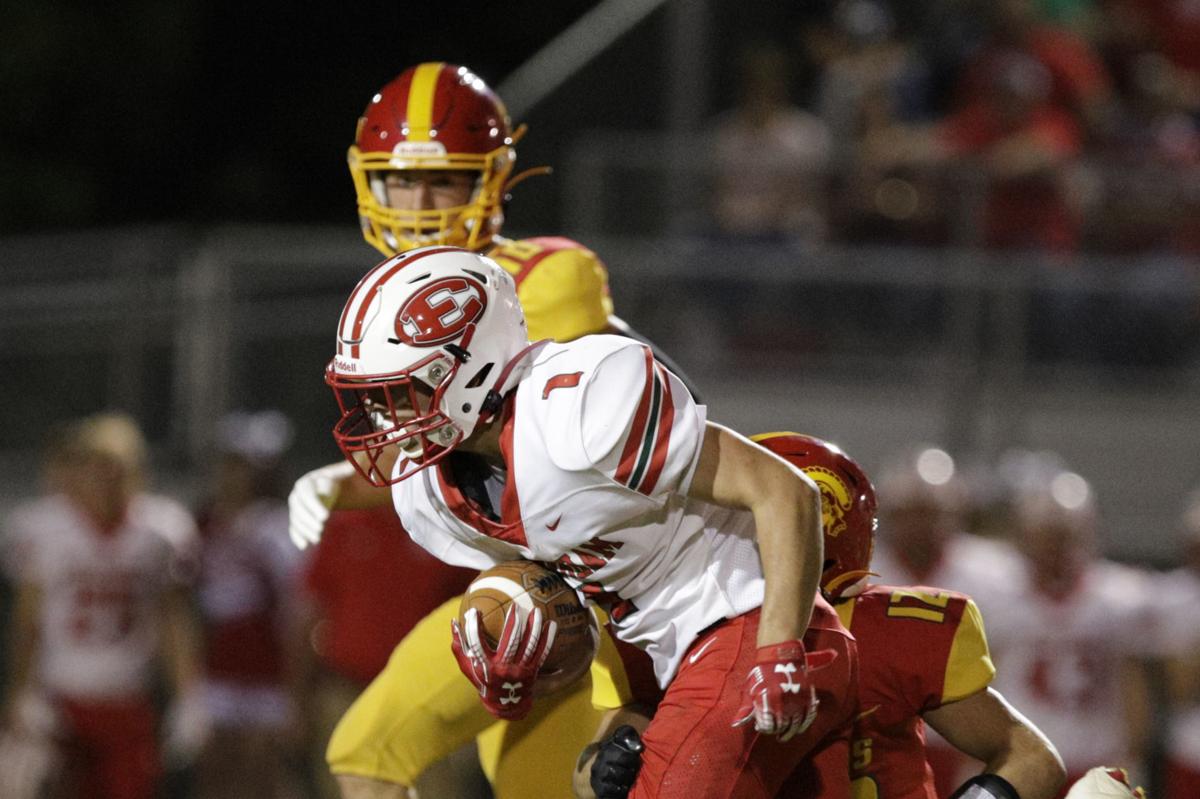 Effingham running back Chase Woomer (1) carries the ball against Charleston in Week 5. Woomer ran for 163 yards and two touchdowns against Taylorville on Friday.

TAYLORVILLE — Chase Woomer took advantage of the opportunities given to him on Friday.

Woomer's backfield partner, senior Logan Brown, was inactive, and standout wide receiver Tristin Duncan was getting consistently double-teamed by the Tornadoes' defensive backs, making Woomer the weapon of choice for the Hearts.

He responded with 163 yards on 28 carries and scored two touchdowns to extract some revenge on the Tornadoes for a blowout 64-20 win last season on Effingham's home field.

"For sure this game, especially against a team like Taylorville, it feels so good. They came to our home field last year and running-clocked us and so our big thing was to come here and just kill them and we did exactly that," Woomer said.

Woomer hits the line with a full head of steam and is willing to sacrifice his 5-8, 165-pound frame for a few extra yards.

"He doesn't have a whole lot of fear for someone his size and he's gotten better and better each week," Effingham coach Brett Hefner said. "His development has been big for us, especially with (Logan Brown) being a little banged up and to have somebody to come in and shoulder the load is nice."

Along with Woomer's 163 yards, four other runners accounted for another 132, giving the typically pass-happy Hearts 295 yards on the ground.

"Early on, if you are going to double team Tristin and play people over the top, you shorten the box and you have to run the ball," Hefner said. "Doubling Tristin leaves seven to defend the run and we feel pretty good about running the ball against seven."

Quarterback Nate Shackelford added two rushing touchdowns of his own, creating another dimension to the Hearts' running attack.

"Nate is so good. He's probably the shiftiest kid I have ever seen. He makes something out of nothing," Woomer said. "Like tonight, he gets blitzed and he just takes off and he's gone. He's one of the best quarterbacks around."

Woomer has 614 yards rushing and 11 touchdowns using running style based on staying low and being physical.

"I try to run right through people," he said. "(On my first touchdown) I was just keeping my feet moving and I saw the guy in open space and I made a little jab step and I tried to get past him and I went right through him."

The Apollo Conference will be decided in a battle between the Class 4A No. 8 team (Effingham) vs. No. 6 (Mount Zion), and Woomer sees his team continuing to meet the goals set at the start of the season.

"We are playing great and we have to keep our minds set on the playoffs. We have a big one next week — 7-0 vs. 7-0 — and we have to play for a conference championship," he said. "This victory is huge and I think Mount Zion will look at it and they know that we mean business.

"Our goal have been an Apollo Conference championship, playoffs and state championship. We are checking one off and keep going. Next week, we've got to take the win."

For a look at the area high school football standings after Week 7 and the Week 7 stat leaders, see the B2 scoreboard.

Week 7 football roundup: Check out all of the Herald & Review's coverage

Check out all of the Herald & Review's Week 7 coverage.

Arcola has a dominant performance in win against Tri-County

ARCOLA — On the first damp and cold Friday of the high school football season, Arcola scored on all eight possessions, including five touchdow…

Pride of the Lions: Coby Crafton and LSA football have stuck together in difficult season

DECATUR — Watching LSA-Mount Pulaski's is a lot like stepping into a time machine back to the first years of football, when the pass wasn't an…

Conference titles and playoff positioning are on the line as the season enters its final third.

DECATUR — The top half of Jacob Bryles' body so badly wanted to fall forward, out of the back of the end zone to safely rest in the green gras…

MacArthur defense pitches a shutout in a win over Eisenhower

DECATUR — For the first time in the history of the Decatur Public Schools, a team has qualified for the postseason three years in a row.

DECATUR — As Derek Spates was walking off the field and up the hill to the Eisenhower visiting locker room on Friday, he stopped, leaned over …

MOUNT ZION — When Peyton Moreau was in class this week, he had trouble keeping his mind on his classes.

Effingham running back Chase Woomer (1) carries the ball against Charleston in Week 5. Woomer ran for 163 yards and two touchdowns against Taylorville on Friday.