Subscribe
Read Today's E-Edition
Share This
The Cola Wars are back: Former Tuscola, Arcola players, coaches remember the glory days of the rivalry
0 Comments
Share this
1 of 5 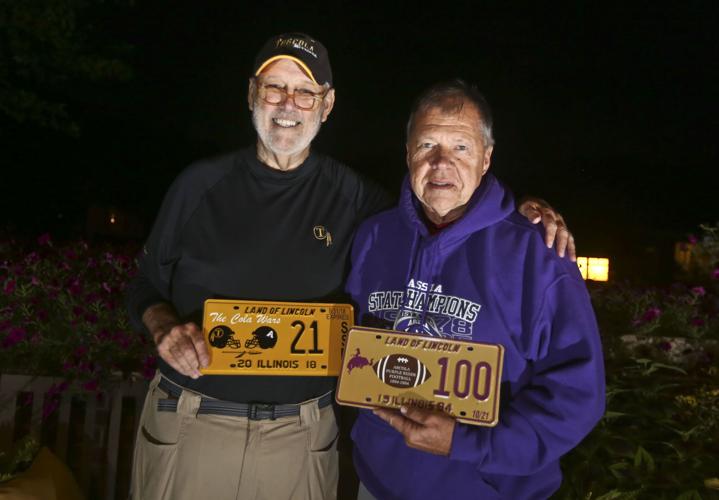 Tuscola's Mike Carroll, left, and Arcola's Randy Rothrock both played in the Arcola-Tuscola football rivalry in the 1960s and have been to almost every meeting between the two schools since. The Cola Wars rivalry returns on Friday in Tuscola for the first time since 2011. 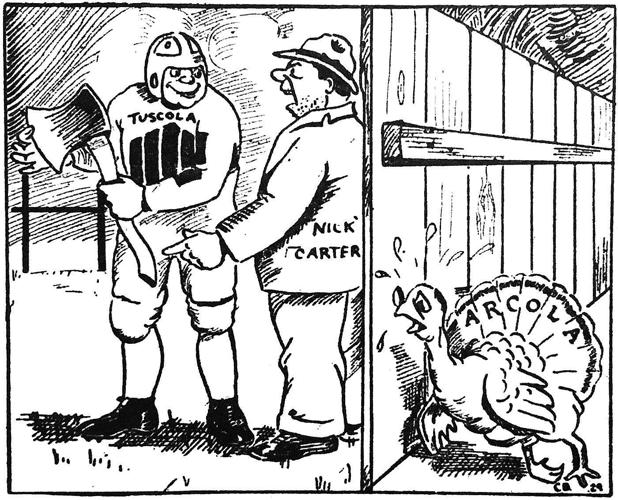 Decades ago, the annual football game between Tuscola and Arcola was played on Thanksgiving Day. This cartoon, from a 1931 Tuscola yearbook, depicts the Thanksgiving tradition. The two teams will play again on Friday. 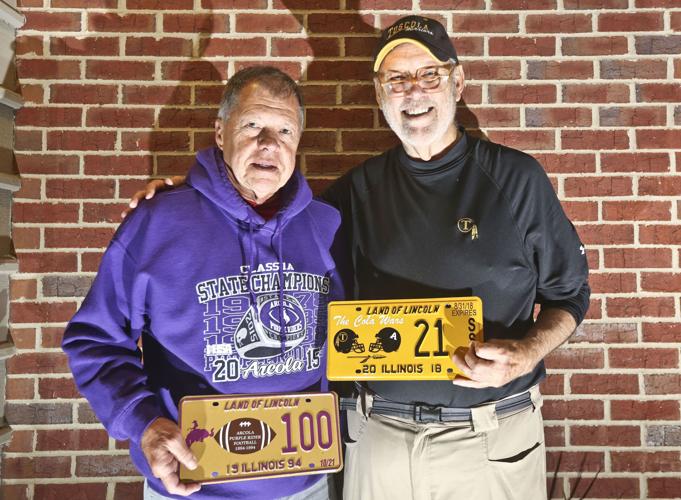 Arcola's Randy Rothrock, left, and Tuscola's Mike Carroll, pose for a photo with license plates that commemorate the game. 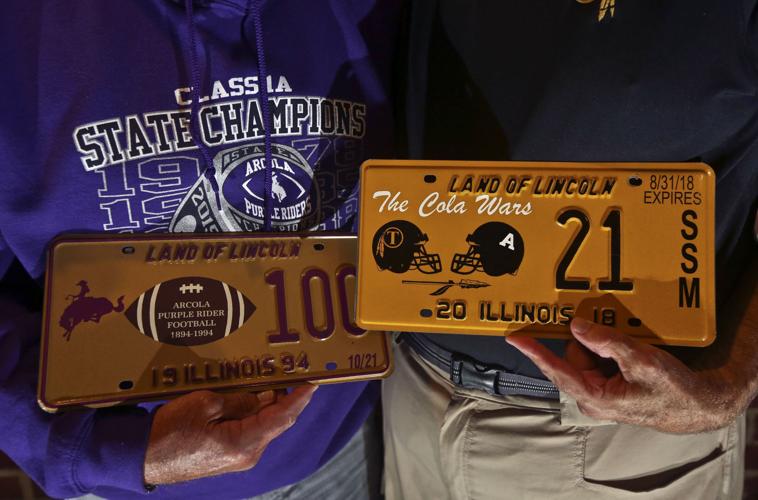 License plates that commemorate the Tuscola-Arcola rivalry game were produced for the return of the rivalry this season. Friday's game will be the 105th in the series. 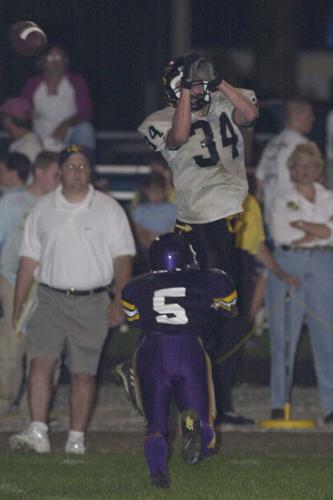 The Tuscola Warriors and Arcola Purple Riders have been battling it out on the gridiron since the 1890s.

TUSCOLA — It’s been 55 years since Terry Miller wore an Arcola football uniform. He hasn’t been a resident of Arcola since graduating in 1964.

After high school, Miller played football at the University of Illinois and in the NFL. He’s been a resident of Lexington, Ky., since his NFL career ended in 1976.

But Miller still makes it back to his hometown a few times a year in the fall. And when he’s home, memories still have a way of flooding back.

“Even now, when I drive by Tuscola High School … I get this feeling,” Miller said. “I get fired up.”

Miller is headed back to Douglas County on Friday for the revival of the Cola Wars — the formerly annual game between Arcola and Tuscola. This will be the 105th meeting between two of oldest, most successful football programs in the state, but the first since the 2011 playoffs.

The two towns — eight miles apart — first played in 1896. They were rivals well before the football series — it started when a vote for the county seat was won by Tuscola, with 10 times as many ballots cast as there were residents. A re-vote also resulted in Tuscola earning the seat, but Arcola residents remained bitter about the vote for years, according to Tuscola historian and former Douglas County judge Mike Carroll.

“That set the stage for bad feelings,” said Carroll, a 1965 Tuscola graduate.

The game became an annual occurrence starting in 1905. In the early days of the football rivalry, the game often got violent. The 1906 and 1908 games were forfeited because of brawls. In 1918, the game erupted into a vicious fight. Fans rushed onto the field and both teams claimed victory.

“It was very common for there to be fights,” Carroll said.

Eventually the fights stopped, but the hijinks didn’t.

During the 1960s, when Carroll and Miller were playing, Tuscola students burned a "T" into the Arcola field with sulfuric acid. The following year, Arcola sprayed graffiti on the Tuscola press box with purple paint. There were incidents of outhouses being burned on the opponents’ field. In 1961, the legend is that Tuscola students gave some chickens ex-lax and let them loose inside the school at Arcola.

Former Tuscola coach Stan Wienke, who coached the Warriors from 1990 to 2007, said those types of incidents were still happening in the early 1990s.

“When I got here, it was still 100 percent wacko,” Wienke said. “After we beat them (in 1994), the next year they came to Tuscola and stole all the Warriors signs people had in their yards.

“Eventually, that stuff had to stop. Times changed. In the old days that was fun, but when people are paying a bunch of money for these signs, they were ready to press charges.”

Up until the advent of the IHSA playoffs in the 1970s, the game was usually played on Thanksgiving Day. Crowds would often exceed 3,000, and other schools that also played their games on Thanksgiving would play early in the morning so they could go to the Tuscola-Arcola game after.

The game also usually decided the Okaw Valley Conference championship. Arcola historian Randy Rothrock, a former Arcola player, assistant coach and principal, said when he was a player in the early to mid-60s, the game had decided the Okaw champion 14 of the previous 17 seasons.

There’s no consensus for the greatest game in the rivalry’s history — “Everyone always thinks one from their decade is the best,” Rothrock said. But it’s hard to argue against the 1962 game. Both Miller and Rothrock were playing for Arcola, and Carroll was playing for Tuscola. Arcola was heavily favored, having blown out all of its opponents. Tuscola hadn’t lost, but had two ties and squeaked by in its five wins.

“We were small and slow, and also weak,” Carroll said, laughing. “Arcola was loaded — they had Terry Miller, Jim Monahan, Jim Strange. They’d dominated everyone.”

But Tuscola somehow stayed in the game, which was tied 7-7 with 16 seconds left. Facing a fourth-and-long, Miller punted the ball back to Tuscola and Roger Chaplin returned it 70 yards for a touchdown to give the Warriors a 13-7 win.

“I tried to block the punt, and I didn’t really see the return because (Miller) was sitting on me,” Carroll said.

Even after going on to play for the Illini and in the NFL, Miller said that loss was still the hardest to take in his playing career.

“It tore me up,” Miller said. “I can remember sitting in front of my locker and just being devastated. It hurt more than any game I lost in college or the NFL.”

When the IHSA began its playoff structure in 1974, it began crowning a state champion and the rivalry began to lose some of its luster.

By the time Wienke became coach in 1990, Arcola was a powerhouse under coach Steve Thomas and had a big lead in the series. It took Wienke until 1994 to beat Arcola. The rivalry may not have been as hot as it was in the 1960s, but it still meant something to the people in the communities.

“When we won (in 1994), our side rushed the field like we’d just beaten Duke on their home court,” Wienke said. “You’d think we’d won the Super Bowl or something. People I didn’t even know were hugging me and giving me high-fives.”

Current Tuscola athletic director Ryan Hornaday was a sophomore on that 1994 team.

“They had beaten us 66-0 my freshman year,” Hornaday said. “When we beat them, I turned around and looked over my shoulder and there were adults on our side bawling because we’d beaten them.”

Tuscola left the Little Okaw after the 2006 season, and the only times the rivals have met since were the 2007 and 2011 playoffs. But after Central A&M athletic director Jess Lehman picked up Arcola on its schedule four years ago, Hornaday worked out a deal with him to trade Week 2 opponents, and the rivalry was back on for the 2018 and 2019 seasons.

“I begged and pleaded with him,” Hornaday said. “We were glad it worked out and we were able to get it back on the schedule.”

On Friday night, Wienke will be where he usually is during Tuscola games these days — sitting in a golf cart in the end zone. Miller will be there meeting up with his old friends Rothrock and Carroll.

Carroll may want to be on his toes.

“I haven’t lived there for a long time, but I’m still an Arcolan — you just don’t leave where you grew up,” Miller said. “I’m looking forward to talking to a bunch of those guys — even the Tuscola guys.

“I’m good friends with a lot of Tuscola people. We went through something together I don’t think any of us will ever forget. But I still get that feeling when I see them that I want to beat the heck out of them.”

For most fans, it's an easy choice of where to trek to Friday night — your school's team.

The "Cola Wars" are coming back.

Mount Zion defense carries the weight in win against Lincoln

MOUNT ZION — The Mount Zion offense is still a work in progress. But the Braves defense showed it can hold things down until the offense catches up.

DECATUR -- It was a game of firsts Friday night as Warrensburg-Latham visited LSA for the first ever meeting between the two Macon County schools.

Tuscola's defense shuts out Arcola in return of the Cola Wars

TUSCOLA — Tuscola picked up where it left off in the Cola Wars.

Tuscola's Mike Carroll, left, and Arcola's Randy Rothrock both played in the Arcola-Tuscola football rivalry in the 1960s and have been to almost every meeting between the two schools since. The Cola Wars rivalry returns on Friday in Tuscola for the first time since 2011.

Decades ago, the annual football game between Tuscola and Arcola was played on Thanksgiving Day. This cartoon, from a 1931 Tuscola yearbook, depicts the Thanksgiving tradition. The two teams will play again on Friday.

Arcola's Randy Rothrock, left, and Tuscola's Mike Carroll, pose for a photo with license plates that commemorate the game.

License plates that commemorate the Tuscola-Arcola rivalry game were produced for the return of the rivalry this season. Friday's game will be the 105th in the series.

The Tuscola Warriors and Arcola Purple Riders have been battling it out on the gridiron since the 1890s.