DECATUR — While you might find cutting edge offenses on NFL or college team, check out an 8-man football game run by LSA/Mount Pulaski's head coach Jordan Hopman and you will be transported to the past when the run was king and the forward pass might as well still be outlawed.

"Coach Hopman makes a joke that we don't run offenses that have been run in the past century. That's his motto," LSA senior running back Coby Crafton said.

Hopman, in his second season as LSA football coach and first for the team in the Illinois 8 Man Football Association, has embraced a game plan reminiscent of the days of the Decatur Staleys.

"I know the kids were a little wary after we had been watching a lot of film from 8-man teams across the country that are running four wide receivers and throwing the ball all over and then I said, 'We aren't even going to have a quarterback,'" Hopman said. "We have no quarterback and we believe in sharing it. I tell those kids that if they want to be a receiver, be a back for us and you are going to get your touches.

"We totally bought into what I was selling early in the season and we are rolling on all cylinders."

The Lions didn't throw a pass — they have thrown just two through their first three games — and ran the ball for 325 yards in a 38-6 win over Cuba North Fulton on Saturday at home.

"Lleyton is crazy fast and for him it is: Get him to the edge and he can make some jukes and he can run past people," Crafton said. "Emmanuel puts his head down and can run through you. He lives by the 'hit it up the middle, hit it hard and get four at a time' mantra."

Crafton was the main offensive weapon for the Lions last season in 11-man football when they finished 1-8. He has embraced the transition to 8-man.

"I think it going really well. It is the same game. There are still hard hits and still chippiness on the line. It is the same game, we just have three less guys," Crafton said. "I enjoy it. In my freshman and sophomore year, at times we were a spread offense and at times we were a tight offense, so I have done both. I've come to learn this is what we do and I've learned to love it."

Hopman was eager to get Crafton, who has committed to play baseball for Millikin next year, on board when the 8-man idea was originally presented. He has been blown away by Crafton's leadership this season.

"Coby is a tremendous leader and he has really stepped up. He has taken a step forward even from 2019 when he did the majority of the running for us and he got battered and bruised," Hopman said. "When we were able to talk and discuss what this was going to be like. I know he was unsure. He has become a leader, not only by is voice and his words, but his performance on the field. I'm so happy he gets to play in his senior year. "

LSA's defense has pitched two shutouts (30-0 over Pawnee/Lincolnwood in Week 1 and 20-0 over Danville Schlarman in Week 2) and has allowed just one touchdown in three games. Senior defensive lineman Conner Frame recorded two sacks on Saturday to power the Lions' defense.

"Connor might be the best pure athlete on the team and we wanted to keep things simple for him. We just say, 'Go do it, go get that quarterback' and he excels at it," Hopman said. "He is tremendously strong and extremely fast for a kid his size."

The 8-man game trades deep passes and flashy plays for the excitement of recovering an onside kick and going for it on fourth down. The Lions have embraced the change and are making the most of it.

"Our biggest challenge right now is making sure we stay healthy. We don't have a ton of guys as we dress 18 players. We have to stay focused and stay hungry and make sure that we handle our success in the correct way," Hopman said. "We have really had a lot of fun and kudos to those kids for believing in that and buying into that. In today's culture, they could look at this and say forget it, we aren't playing, but they want to win and I give them credit."

Watch now: Photos and video from Springfield at MacArthur football

See photos from Springfield at MacArthur

The Arthur-Lovington-Atwood-Hammond football team beat Cerro Gordo-Bement 37-6 on Friday. Check out photos and videos from the game.

Check out all the scores from Week 3 games around Central Illinois.

Watch now: Springfield High's Rashad Rochelle too much for MacArthur in home opener

MacArthur football jumped out to a 14-0 lead in the first half against Springfield High on Friday in their spring season home opener but the Senators, led by junior quarterback Rashad Rochelle, scored 27 unanswered points to win 27-14.

After a two-week break, Millikin football travels to Augustana on Saturday

DECATUR — After a two-week break, the Millikin football team plays its second game of the spring on Saturday when the Big Blue travel to Augustana.

Watch now: Just like their offense, St. Teresa football are a powerhouse on the defensive side of the ball

As St. Teresa safety and quarterback Chord Miller was running towards the end zone, ball in hand, after picking off a pass from Tuscola quarterback Peyton Armstrong, he could feel the leg cramps were starting.

Watch now: Central A&M's James Paradee is making a name for himself at quarterback

St. Teresa quarterback Chord Miller threw for a touchdown, rushed for another and ran in a pick-6 against Tuscola on Thursday as the Bulldogs won 41-10.

The Millikin University football team survived four overtimes to defeat Augustana College 40-34 on Saturday in Rock Island to improve to 2-0 on the season.

Watch now: A look back at Week 3 in high school football, including Arcola's 'brothers in the back field' lead Purple Riders to win over Sangamon Valley

In this spring football season of unusual schedules and COVID cancelations, Arcola coach Nick Lindsey didn't quite know what Sangamon Valley/Tri-City's offense and defense was going to look like on Friday. The Storm didn't play in Week 1 and 2 and when they took the field, they were

If he had it his way, MacArthur junior Ethan Gardner would be playing on the Generals soccer team this spring.

St. Teresa football catapulted to No. 1 in Class 2A in the latest Illinois Football Coaches Poll that was released Tuesday. Maroa-Forsyth, the No. 1 team in 2A last week, fell to No. 3 but received the most first-place votes in the class with five. St. Teresa finished on top with 80 total votes, followed by Sterling Newman with 77 and then Maroa with 74.

For Central A&M volleyball coach Vanessa Rork, you have to make time, you can't just hope to find it.

After a Week 1 win over Shelbyville, the Warrensburg-Latham football team was riding high heading into its Week 2 battle against Central A&M. The confidence came to a screeching halt as the Raiders defense limited the Cardinals to one score in a 19-7 loss.

Abby Mize can barely believe the improvement she has seen on the  LSA/Decatur Christian volleyball team in her four years.

MOUNT ZION — After having its Week 3 game with Taylorville cancelled last week, the Mount Zion football team made up for lost time with 65 fir…

KENOSHA, Wisc. -- The Millikin football team lost its final game of the season, 41-19, at Carthage College on Saturday in Kenosha, Wis. The Bi…

Watch now: Bears get more than they bargained for at receiver

Was the Brewers-White Sox series a preview of the 2021 World Series?

Was the Brewers-White Sox series a preview of the 2021 World Series? 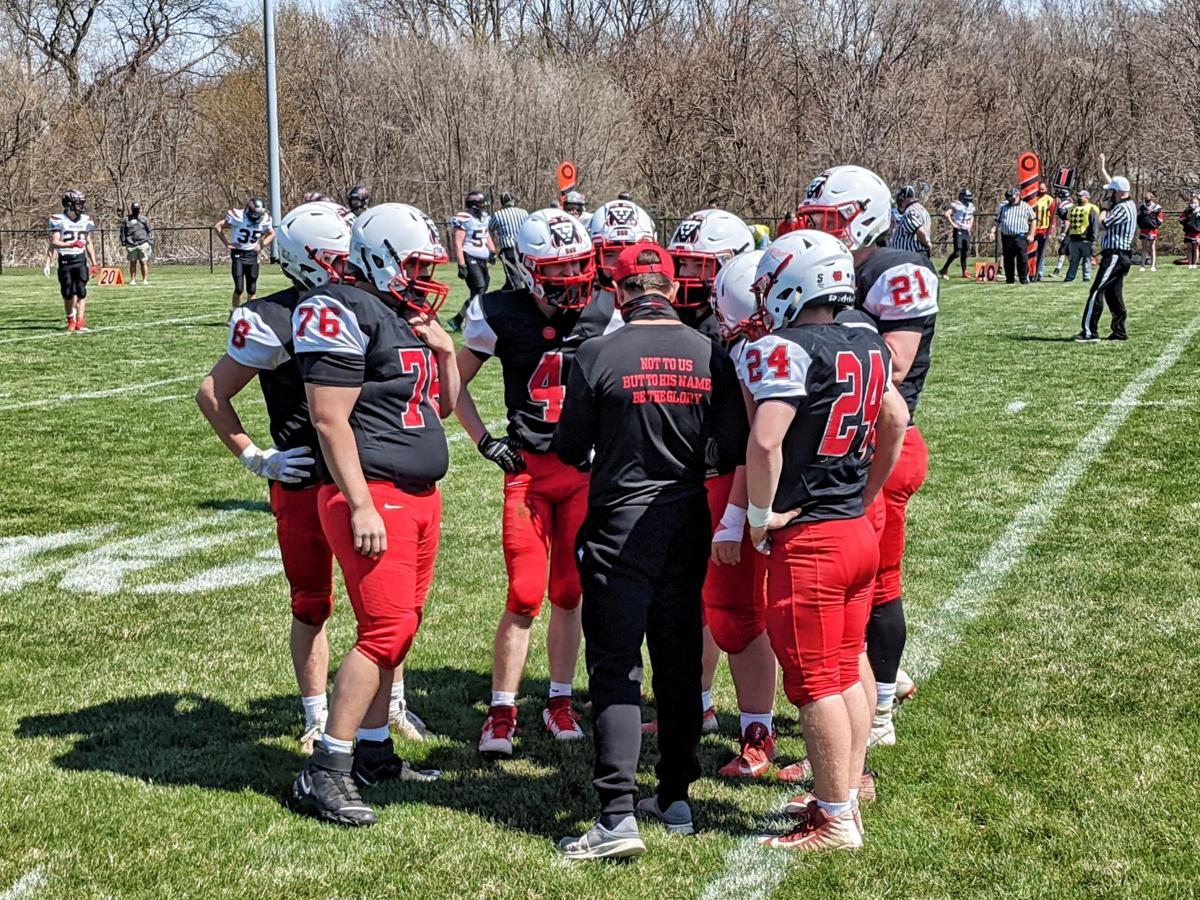 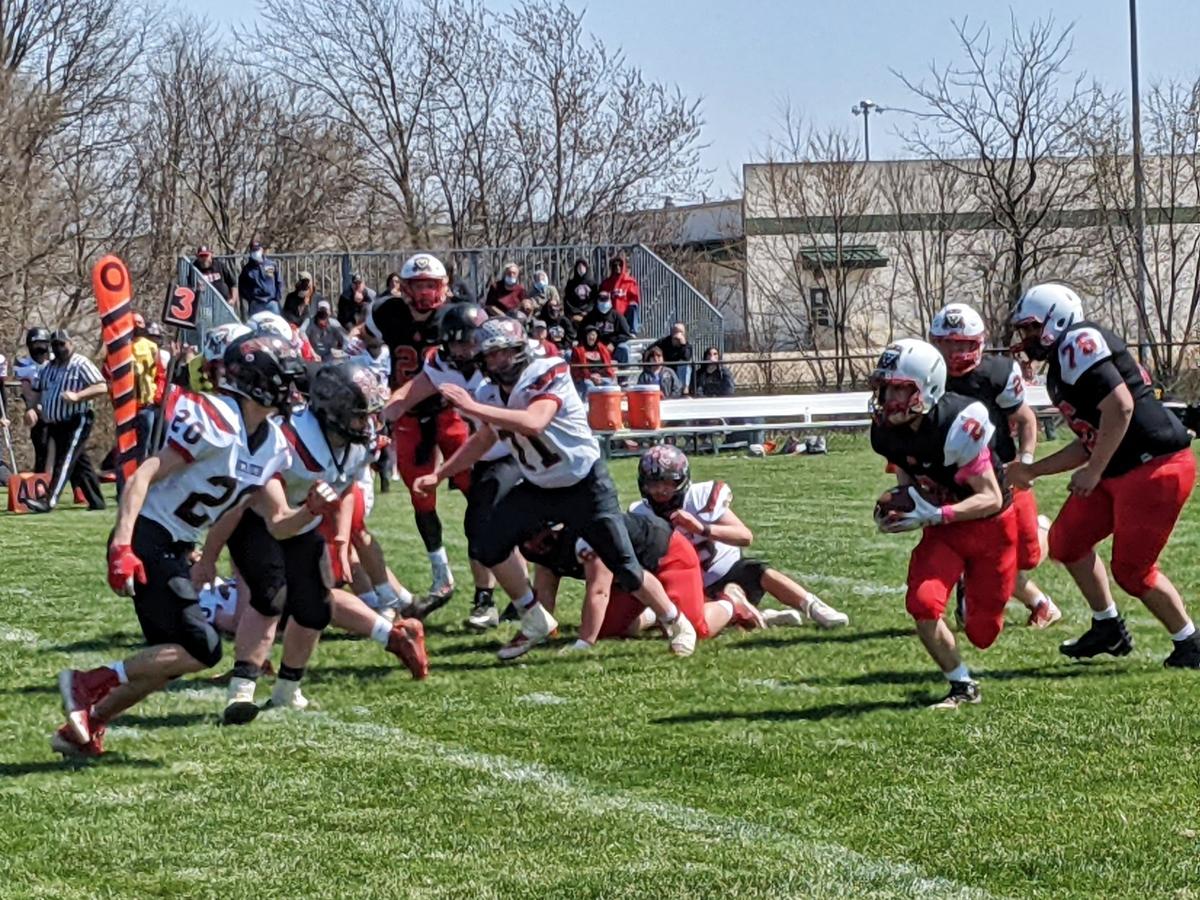 LSA's Lleyton Miller (2) runs with the ball on Saturday against Cuba North Fulton. Miller, a freshman, ran for 124 yards. 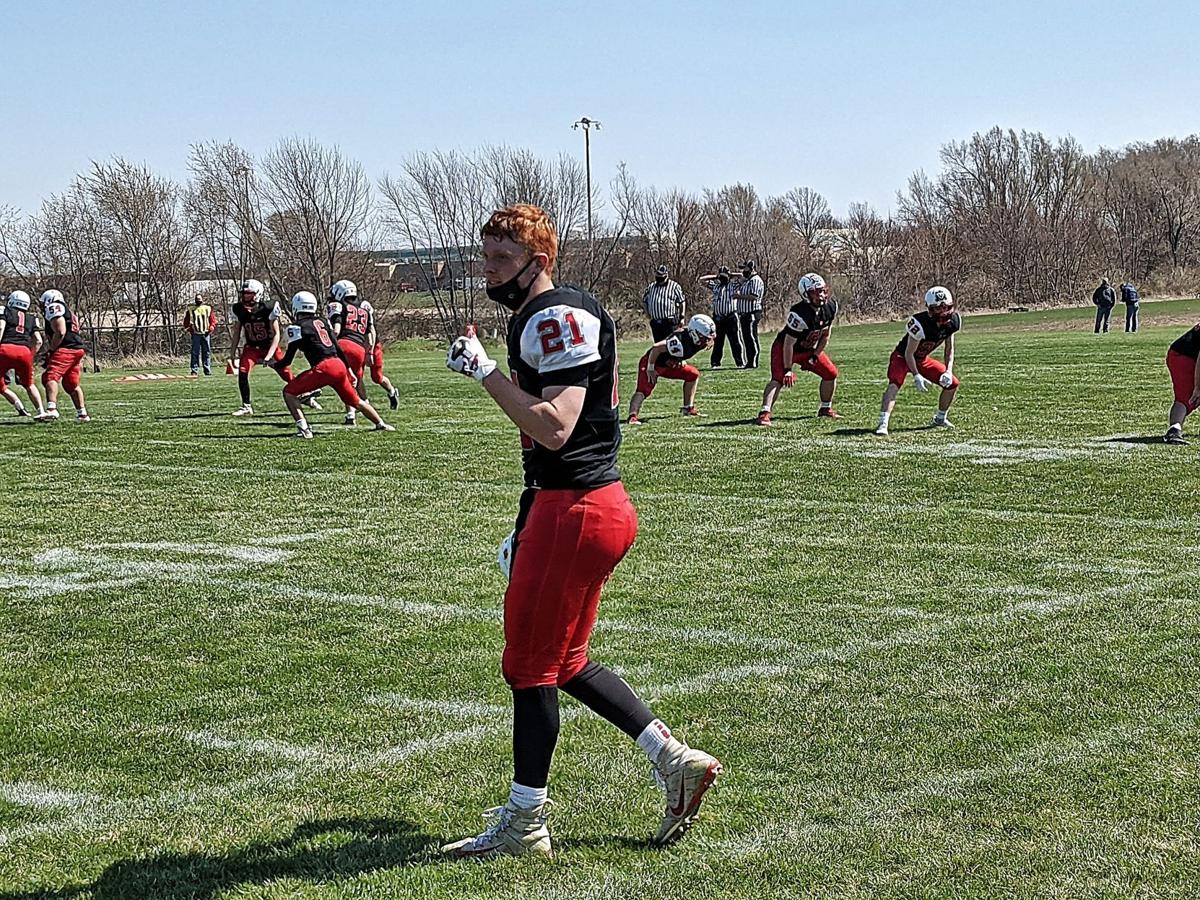 LSA's Coby Crafton (21) prepares for the second half against Cuba North Fulton on Saturday. Crafton ran for 113 yards and two touchdowns. 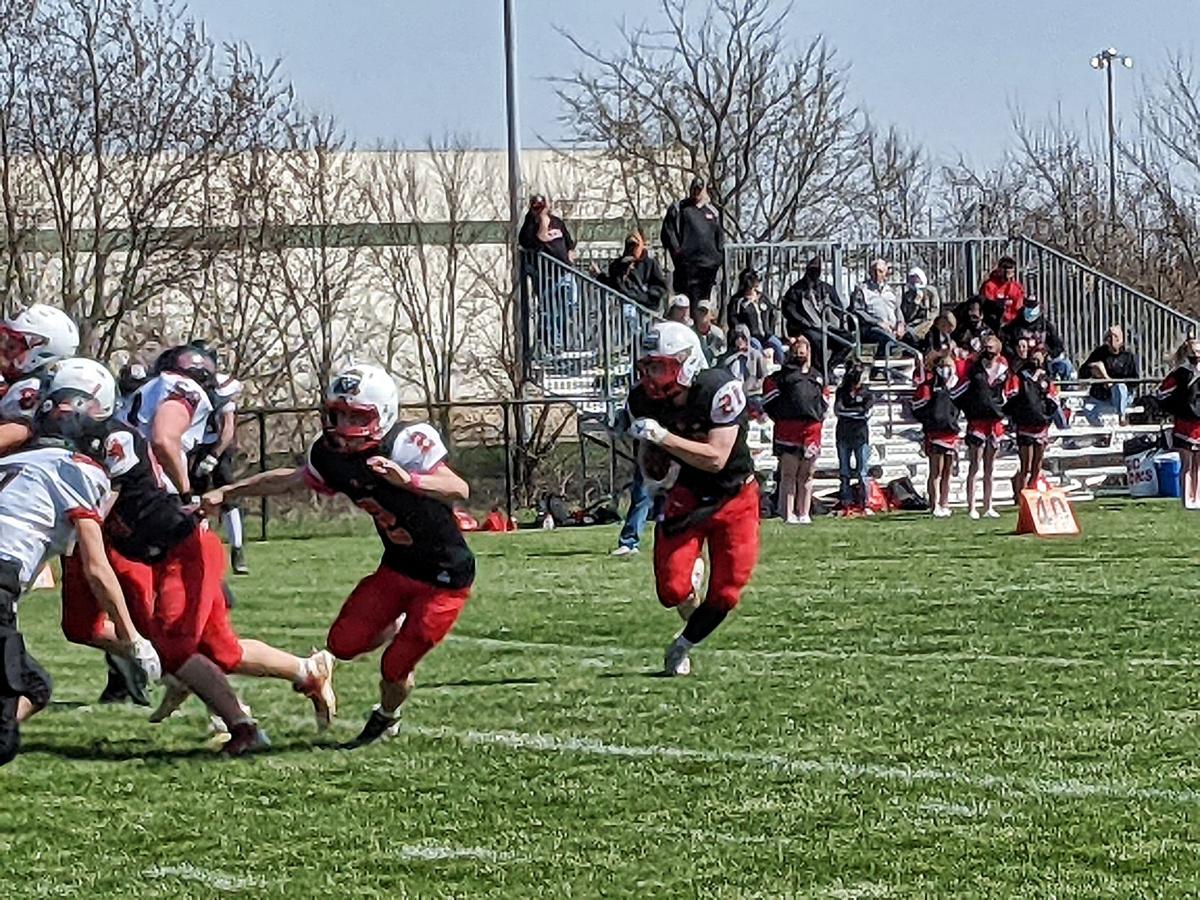 LSA's Coby Crafton (21) runs with the ball against Cuba North Fulton on Saturday.