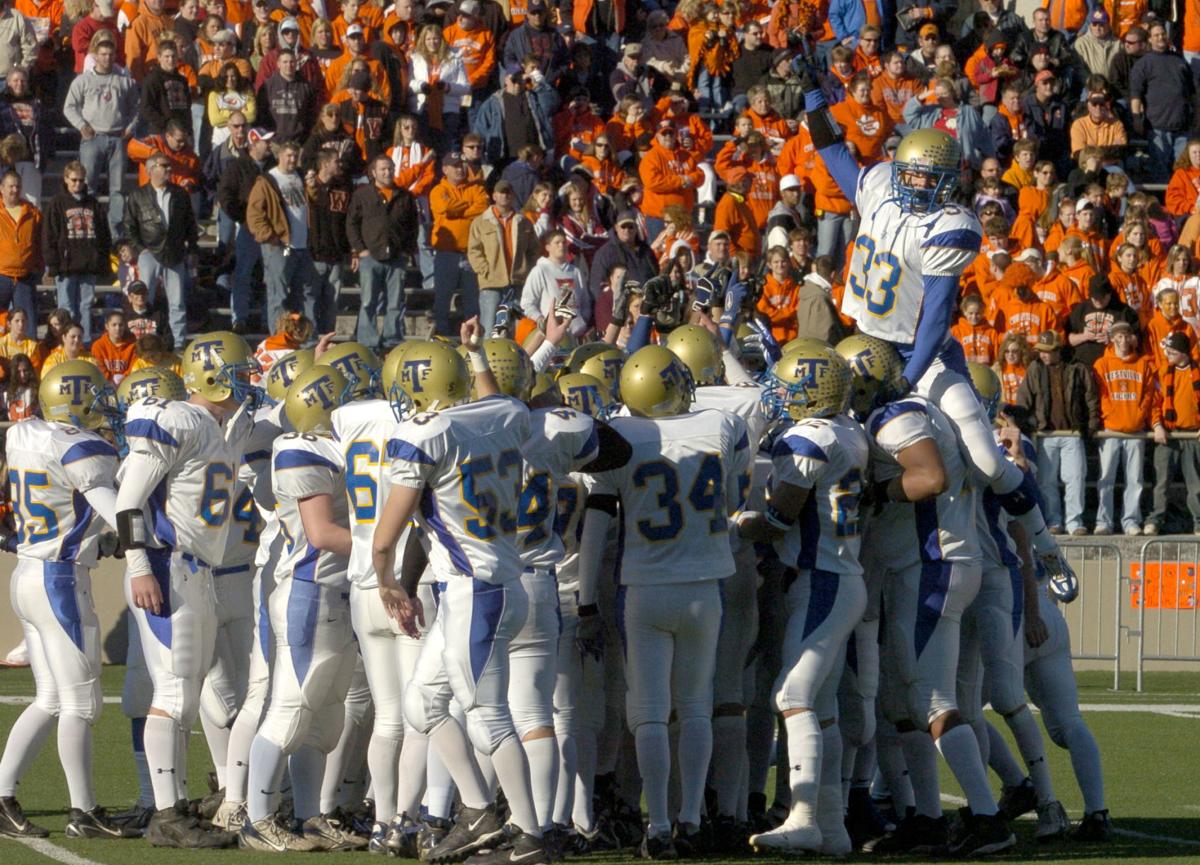 Shane Conaway leaps into the huddle of his teammate in front of the Westville crowd. The Trojans won the 2006 state title. 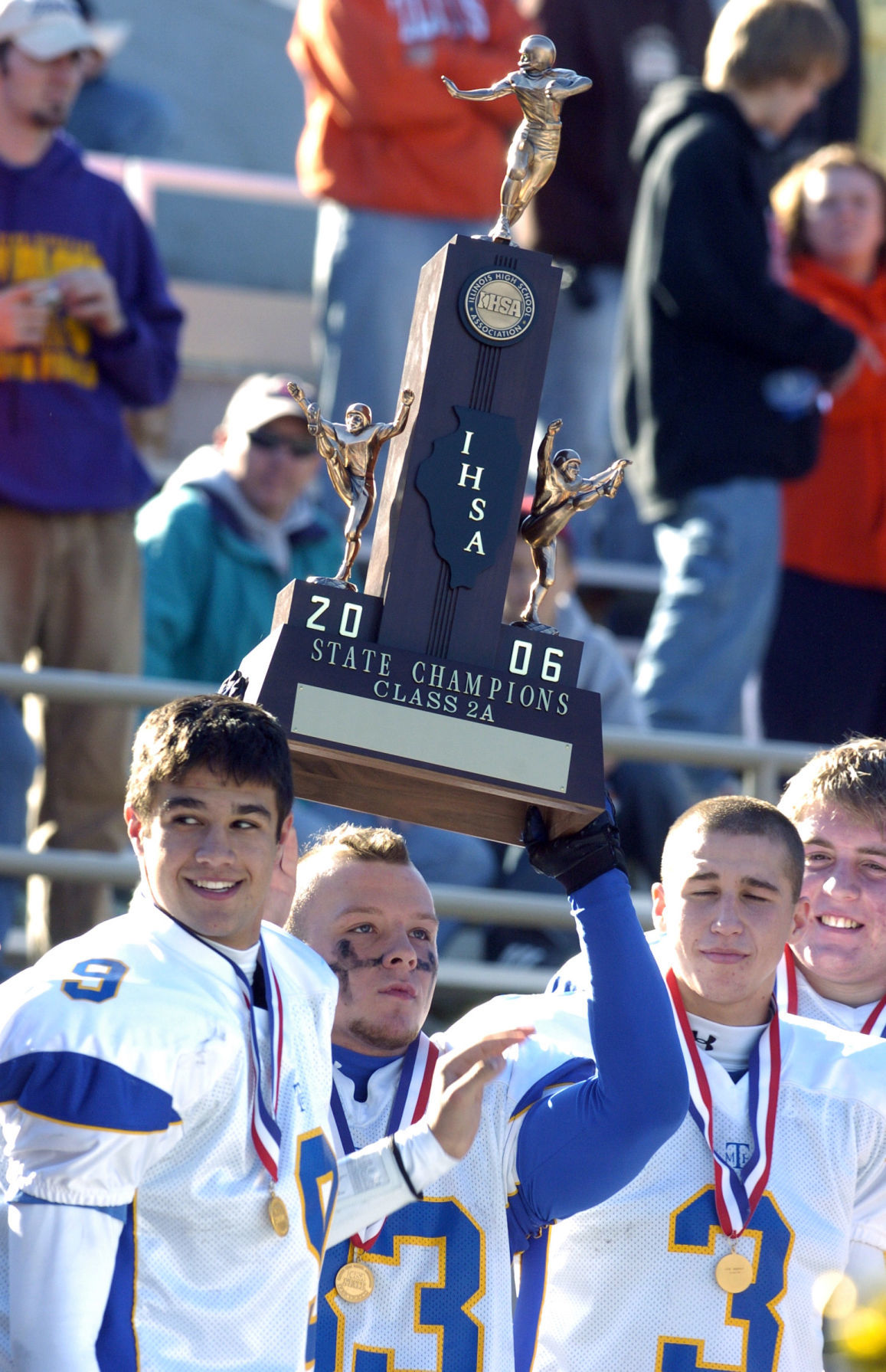 Luke Hockaday, Shane Conaway and Robert Kreps celebrate with the trophy after winning the 2006 state title.

Make that the best team, in his opinion, in the history of IHSA Class 2A. He and assistant coach Jon Kidd, who is now the defensive coordinator, say the 2006 team had no weaknesses.

Re-watch the 2006 state championship win over Westville, which completed a perfect season, with the two coaches.

"I'll be honest, we were really good," Jostes said. "Really good. This Westville team is one of the top three teams we've ever played against. The nerves were a little bit, but I trusted our kids."

Maroa romped most of its opponents that year, but got off to an uncharacteristically slow start and was tied 14-all going into halftime before Jostes said the team settled down in the second half, which started with an onside kick before Maroa broke away for the win.

Jostes and Kidd discuss how standout receiver Robert Kreps turned into one of the best receivers in the state with quarterback Luke Hockaday throwing him the ball and Shane Conaway as the team's running back. Maroa got big contributions from Tyler Roush, who was back from injury after suffering two broken legs that dated back to summer 7-on-7.

Immediately after the game, Jostes had a state championship hat on and some players had pre-made t-shirts. All three of Jostes' kids were there, including his daughter Brynn, who was born in Week 9.

"I think that was cool," Jostes said. "We have a cool picture of all of us and the boys are little, so that was all pretty cool."

It was the first state championship for Jostes and Kidd, and they've gone on to win one more and have a total of eight title game appearances. But this one, they said, set the culture. Kidd has recently watched the game and Jostes hadn't watched it for a while before Thursday afternoon.

Kidd was a single guy around the age of 25 in his third year with the team, who was in the weight room with the players and sometimes on the scout teams. He's still close with members of this group.

"This one, relationship-wise with the kids, this group of kids I still have relationships with now," Kidd said. "Tyler Roush is like my little brother. We talk every single day. This group was a special group."

PHOTOS: A look back at the Maroa-Forsyth/St. Teresa rivalry

IHSA member schools have voted to rescind a plan to go to districts in Illinois high school football.

WAGNER: Local restaurants have given us so much. We devised a challenge to help give back to them.

I didn't see much of a point to buy groceries in early March. My plan wasn't to be here. I planned to be in Indianapolis then on a plane follo…

'She’s one of those kids you have to have in your program.' Delaney Harjung brings spark to Maroa-Forsyth softball

Maroa-Forsyth's Delaney Harjung isn't the best hitter, but she's one of the heartbeats for a team that has high aspirations for when, and if, this season begin as the COVID-19 pandemic has led to the IHSA suspending spring sports.

WAGNER: Handing out area and county Player of the Year 'what-if' boys track and field awards

Cully Welter praises the ability that his 2018 football team had to stay composed. Very rarely did the Sages get rattled.

With the state of Illinois now in Phase Three of Gov. J.B. Pritzker’s "Restore Illinois" plan, the IHSA will allow high school students to participate in voluntary strength and conditioning sessions beginning on June 6, the board announced on Friday.

For the most part, even non-conference football games are pretty static, but interesting none the less.

Shane Conaway leaps into the huddle of his teammate in front of the Westville crowd. The Trojans won the 2006 state title.

Luke Hockaday, Shane Conaway and Robert Kreps celebrate with the trophy after winning the 2006 state title.