A little bit of flair and a lot of game for St. Teresa sophomore golfer Cody Dodson
0 comments
Share this
Return to homepage × 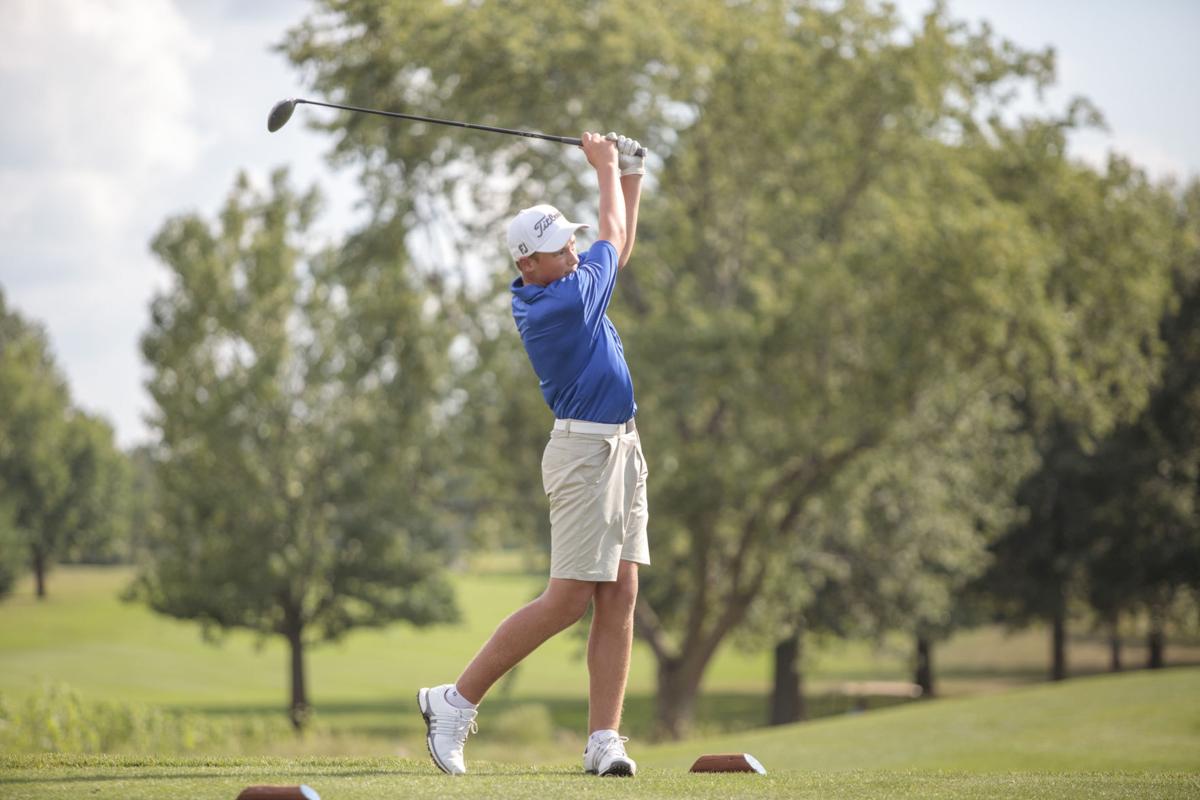 St. Teresa golfer Cody Dodson tees off Wednesday at Hickory Point Golf Course in Decatur. Dodson, a sophomore, shot a 41 on Wednesday and is coming off a state appearance as a freshman. 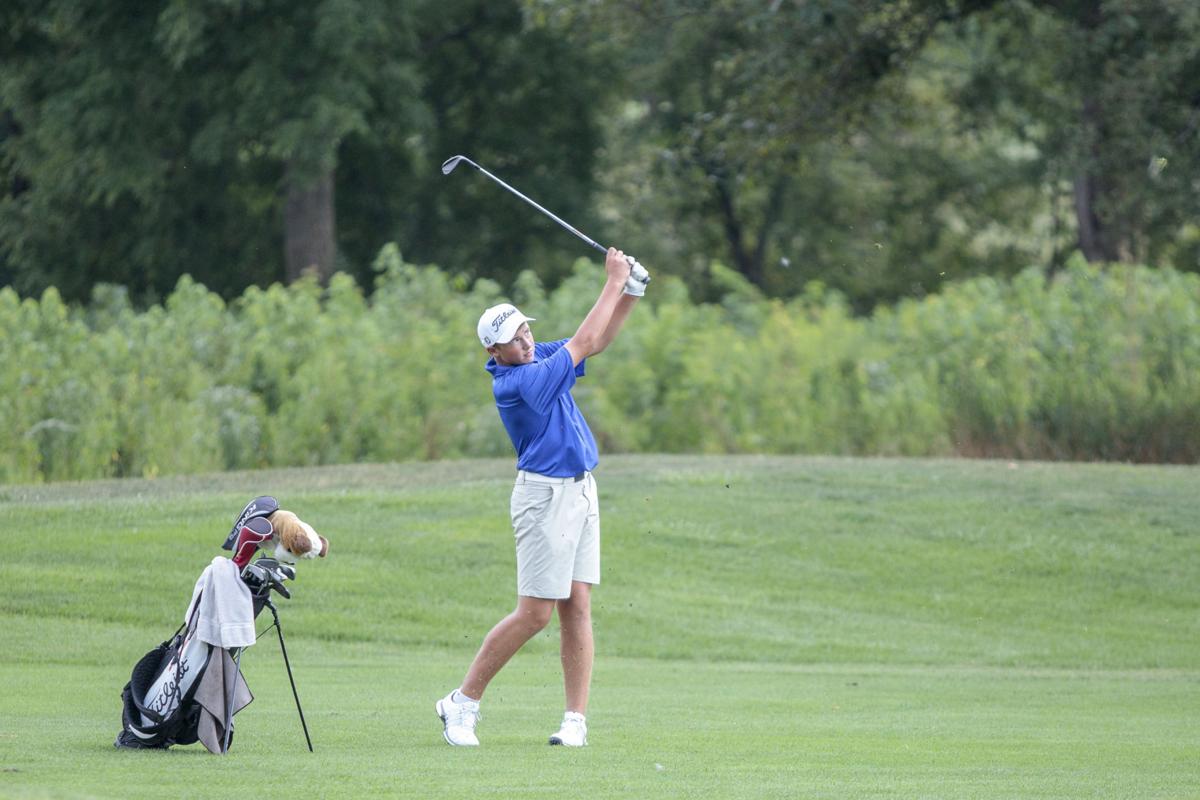 Cody Dodson, a sophomore for St. Teresa, plays golf with a little bit of flair, but has the game to back it up. 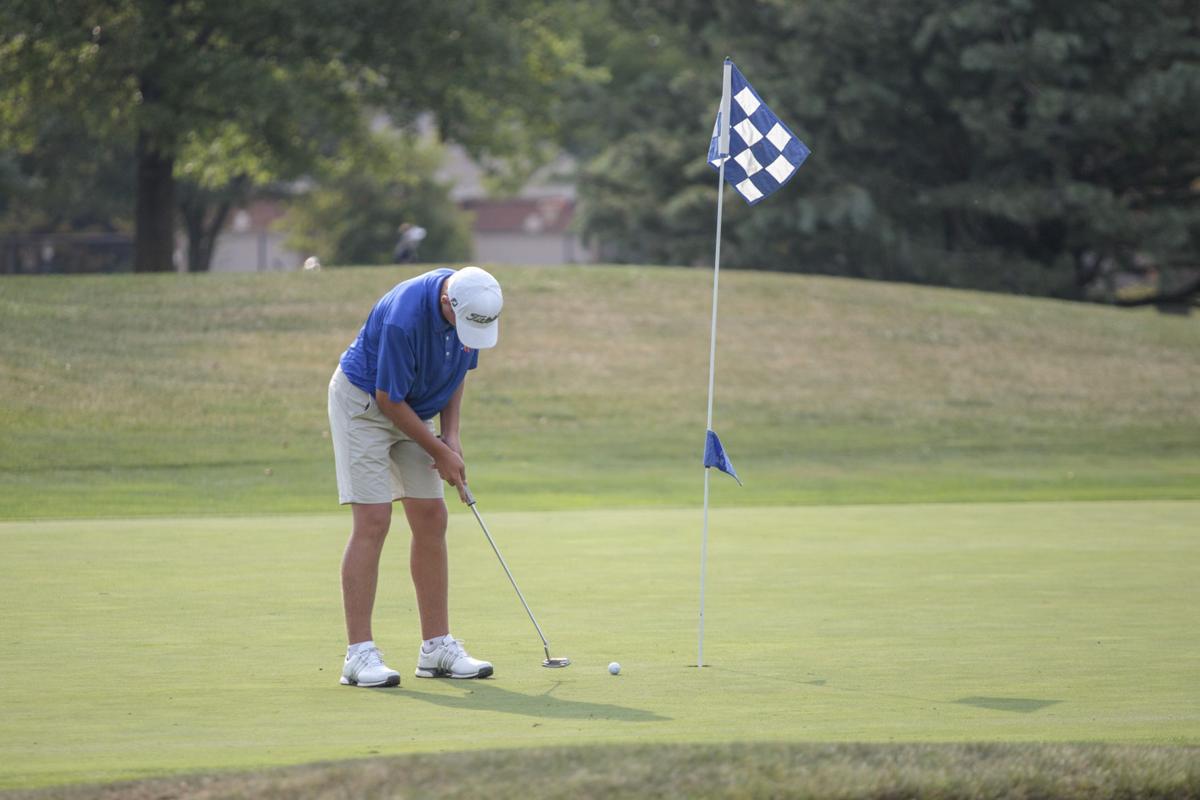 DECATUR — Not long after the sound made when the head of a golf club clinks off of the ball faded away and all that was left in the tee box on the 14th hole at Hickory Point Golf Course was Cody Dodson and the sweltering heat, Dodson stepped a few steps forward to monitor the trajectory of the flight.

At first, it wasn't an entirely satisfactory shot and anyone within ear shot of Dodson, a St. Teresa sophomore, knew it.

The ball must have received the message upon landing.

"Oh baby! What a kick," Dodson let out loudly enough that the three other golfers in his No. 1 grouping knew that he put his stamp of approval on that drive. He had a little pep in his step on the way to follow up with his second shot before finishing with a bogey on the hole.

On the course, Dodson carries himself with moxie and flair. It's as if he's had plenty of bad rounds in his relatively brief golf career, but nary a bad day. He's golfing, a sport be began before his freshman year and quickly excelled in — advancing to state last season — so there are no bad days on the links.

Everyday, match or no match, he marches out to courses to play a round. Over the summer he played on the Illinois Prep Tour, which helped him meet most of the players in the area, and once Dodson knows someone, he opens up.

He's quickly making a name for himself with his play, his dropping scores and critical thinking.

On two different occasions Wednesday, Dodson pulled his driver out of his bag and didn't hit the intended fairway. Back in his bag he went for a club that helps him with more precise hitting. Driving has been a point of focus for Dodson in his brief high school career — he has come a long way in his accuracy with the power club.

“I couldn’t hit the driver last year; I mean, I could hit it 300 yards but I couldn’t keep it in the same county," Dodson said.

Last season, McClellan said, Dodson realized that accuracy was instrumental in lowering his scores and ultimately turned rounds of 90s to rounds of 70s. He did so by straying away from his driver with an emphasis on hitting the fairways.

“That’s what makes him good is he’s willing to step outside the box to try to put in a good score down," McClellan said.

The length of the drive, Dodson learned, didn't show up on the scorecards.

“There were times where I just wanted to bomb it down there but I realized I wasn’t going to win many tournaments doing that," he said. "I needed to be more accurate."

He's still learning the ins and outs of the game and refining his skills. He spends plenty of time doing so — he said he golfed 10 hours a day in the summer. Dodson picked up the sport about a year-and-a-half ago. He played travel baseball in the summer, but was hit in the elbow with a ball, which he said was key in the switch to golf.

Now, Dodson is all in.

“What makes him a talented golfer is he’s willing to put in the work," McClellan said.

Even with the talent and the dedication to golf, his panache shines through. He's chatty on the course, bounces from tee box to fairway to green and onto the next hole. If Dodson is on the course, he's a bit hard to miss in ways that aren't at all boastful, but rather a young golfer enjoying the moment.

Before he finished his card of 41 on Thursday, he teed off on the 18th hole and landed the ball on the right side of the fairway just under a tree. He let out a fairly subtle fist pump as he walked out of the tee box. When he hit the ball out of the next spot, before it landed in the bunker just outside the green, he brought out another fist pump.

"You ready for the chip shot of a lifetime?" he asked the other four No. 1 golfers who surrounded him. It would have been a heck of a birdie and a cap on a solid round, though perhaps not quite the round he was looking for.

The shot didn't fall safely in the hole when he chipped out of the bunker. Eventually, though, it's within reason that shot will go in.

None of this is ideal — the IHSA changes caused by the COVID-19 pandemic. It’s nowhere near that. Still, there are “ideals,” and being positive, encouraging and supportive are among them. It’s worth a shot.

The IHSA announced Monday there will be no state tournaments this fall in golf, cross country, girls swimming and girls tennis. The seasons will end with geographic regional competition.

Car seats, a knee injury, a pandemic and everything in between: Charleston's Hannah Harpster's quest for a state golf appearance

Perhaps there were golf matches last season that Hannah Harpster should have watched from the sideline.

'He's kind of like the horizon,' meet Will Ross, the unflappable sophomore golfer from Monticello

The traffic on US Highway 51 hummed in the background of the fourth hole at the Clinton Country Club and a slight breeze whistled across the fairway as a reprieve from the sun bearing down on the hole.

Few teams in downstate Illinois have had the success at the state level of the Charleston golf program.

How Teutopolis landed a one-year stay with the Apollo Conference

When major college sports began going to a conference-only schedule earlier in the month, Teutopolis Athletic Director Laurie Thompson could see the writing on the wall.

TAYLORVILLE — Teutopolis will join the Apollo Conference ... for a year.

St. Teresa golfer Cody Dodson tees off Wednesday at Hickory Point Golf Course in Decatur. Dodson, a sophomore, shot a 41 on Wednesday and is coming off a state appearance as a freshman.

Cody Dodson, a sophomore for St. Teresa, plays golf with a little bit of flair, but has the game to back it up.