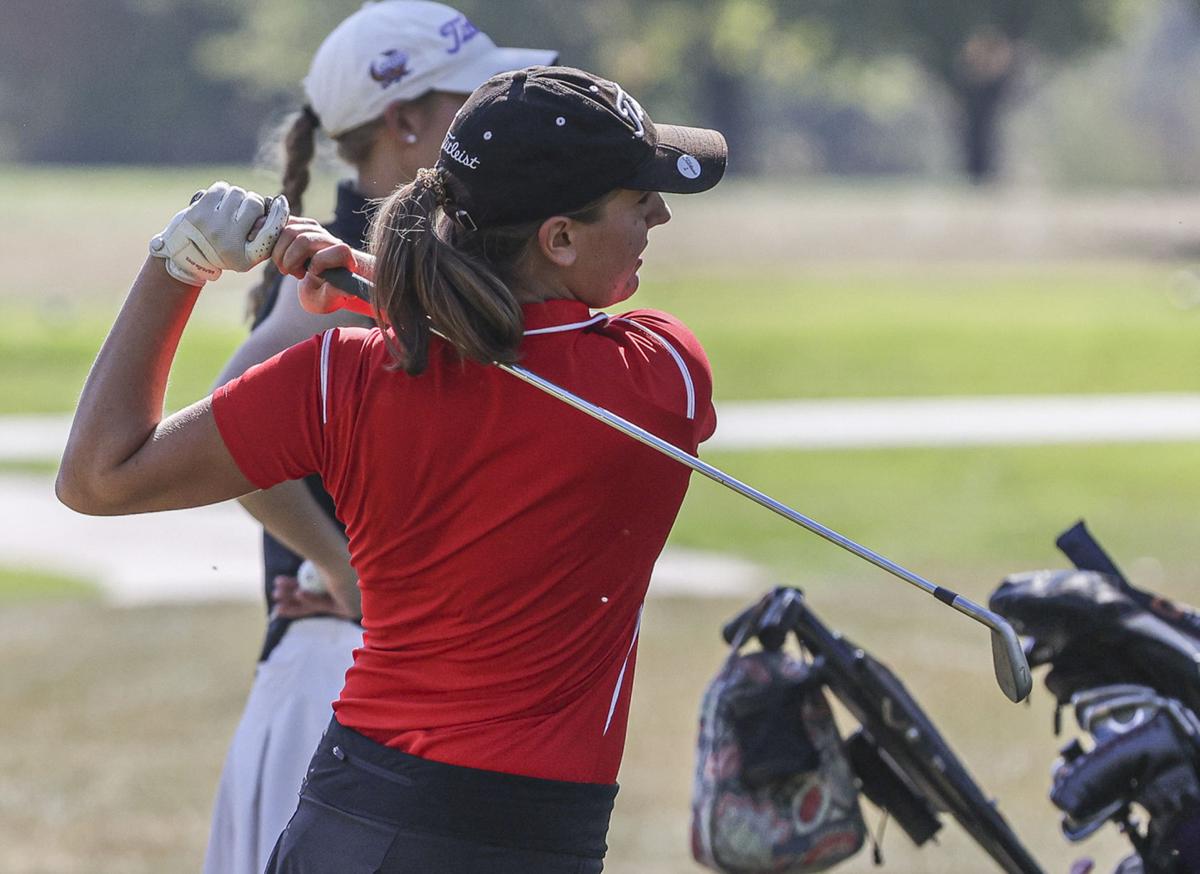 Charleston's Hannah Harpster tees off on hole 9 on Wednesday during Charleston regional. More photos at www.herald-review.com 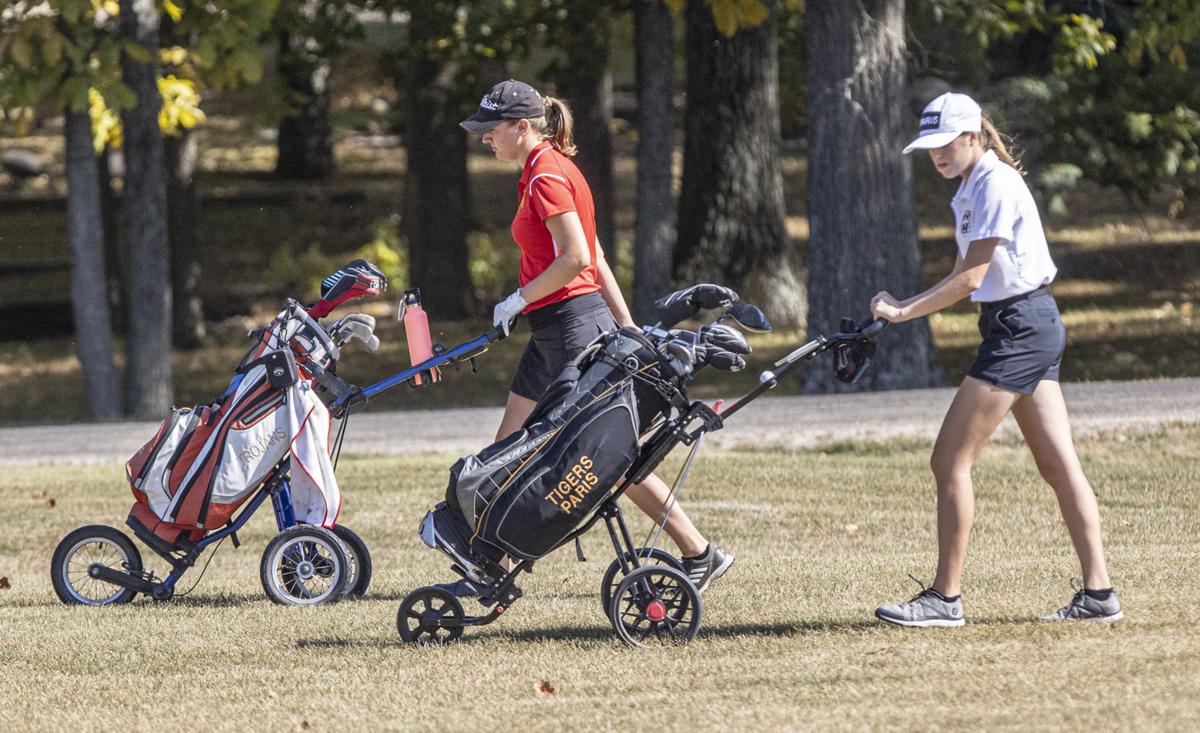 Charleston's Hannah Harpster, left, and Paris Kaitlyn Coombes walk to tee off on hole 9 on Wednesday during Charleston regional. More photos at www.herald-review.com

After winning last year’s individual regional championship, Harpster lost the ability to compete in sectionals because of a knee injury. A year later, she will get that shot at redemption at next week’s sectional after finishing third, with a score of 81, at the Class 1A Charleston regional at the Charleston Country Club on Wednesday.

Harpster will have some company as the Trojans won the regional title with a combined score of 377, 15 strokes ahead of second place Paris, which also advanced. This is the eighth consecutive girls golf regional title for Charleston.

“I would rather win as a team then as an individual just because then we all get to move on together and we get to keep practicing as a team and not just one person,” Harpster said. “I couldn't be more excited about it, honestly. Last year was so rough (with my injury), and when I found out that we would get a sectional this year I was so happy.”

Harpster golfed with the final group of the regional along with Paris’ Kaitlyn Coombes and Monticello’s Ashley Long. Long finished with a regional-best score of 77 and Coombes was second with a score of 79. Other individuals advancing to sectionals included Tuscola's Marley Good and Makenna Fiscus, Shelbyville's Emma Houska and Monticello's Amelia Patterson.

Harpster’s mentality going into her final regional was to find some peace on her home course.

“My coach told me to just go in to today and have some fun and it's my last regional as a senior. He told me to try to relax and that's what I did and had some fun with it,” she said. “I would say my drives and my iron shots are going good today and my putting was saving a lot of things. My chipping was probably the hard part.

“I've been playing out here (at Charleston) since the prep tour started when I was in middle school and it's really my home course.”

Harpster got a lot of help from her teammates, particularly sophomore Madeline Sanders who shot a 95 on Wednesday. Rounding out the top scorers were juniors Rileigh Babbs (100), Taryn Pearson (101), Stacy Zerbst (101) and Tesa Brown (105).

“Madeline is a sophomore and it is just her second year playing since she didn't play before her freshman year and she has definitely stepped up so much and played awesome. She shot a 50 on the front and a 45 on the back, which I think is her best,” Harpster said.

Having so many golfers with scores bunched together is a key strength, said Charleston girls golf coach Todd Keating.

“They are a deep team and they are very consistent. It is very hard to pick places because so many of them are so close. Hannah is obviously our No. 1 but after that it gets kind of fuzzy,” Keating said. “Having that kind of depth really benefits us. If someone is having a really bad day someone else is going to have your back.

“It worked out even better today because my No. 2 through 6 can all shoot around a hundred and my No. 5 (Sanders) today ended up shooting a 95, which is extraordinary. She is our No. 5 and she finished No. 2 today.”

Now that the season-long goal of success in the postseason is here, Harpster is reflecting on competing at her final high school tournament at the Class 1A Rochester Sectional at the Rail Golf Course in Sherman.

“It is crazy to think about that this is the last one. I hope to play in college but I can remember being a freshman and playing out here (at Charleston) for tournaments,” she said. “I'm excited to be a senior and be the captain of the team and help everyone else improve but it is going to be hard to leave.”

In other results from Wednesday’s girls golf regionals, Effingham St. Anthony advanced as a team at the Class 1A Mount Carmel Regional with a second place finish in the team competition. The Bulldogs finished with a score of 327, behind Mount Carmel’s 313. Senior Macy Ludwig led the Bulldogs with a score of 77, followed by sophomore Lauren Schwig, who shot an 82. Senior Reagana Westendorf (83), juniors Nina Hakman (85) and Ellie Wegman (85) and senior Morgan Schuette (93) rounded out the team scores.

Flaten: Taking a look at the drivers that made Macon Speedway's 2020 memorable

If 2019 was the year that I dipped my toe into dirt track racing, 2020 was the year I did a full on cannonball from the high dive.

When you’ve chased a dream for 46 years, through flying dirt, roaring engines and agonizing near misses, it is difficult to accept good fortun…

At about the 11th hole on the Moweaqua Golf Course on Tuesday, Zach Rogers knew the potential for a special day sat in front of him.

Watch now: From pickup trucks to putting greens, the Bement golf team is a family affair

On plenty of occasions, the Rogers family had a pretty simple soundtrack home from golf matches: the hum of the tires of the family truck on the road below.

As Ashley Long and the other three regional medalists in her group moved through the final holes of The Rail Golf Course in Springfield during the Class 1A Rochester Sectional on Thursday, a growing trail of spectators were along for the trip.

Charleston's Hannah Harpster tees off on hole 9 on Wednesday during Charleston regional. More photos at www.herald-review.com

Charleston's Hannah Harpster, left, and Paris Kaitlyn Coombes walk to tee off on hole 9 on Wednesday during Charleston regional. More photos at www.herald-review.com