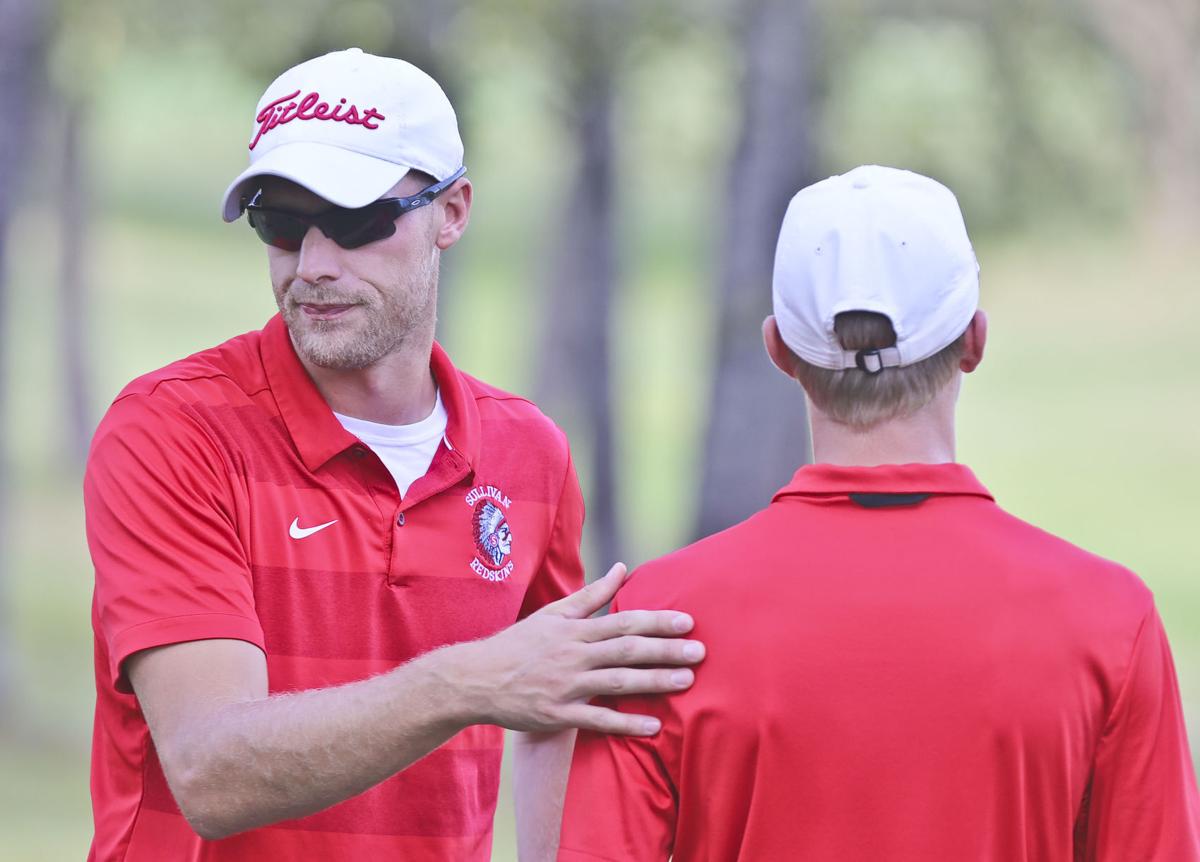 Sullivan's head coach Ben Richter is excited about the IHSA's decision to have golf sectionals this season. 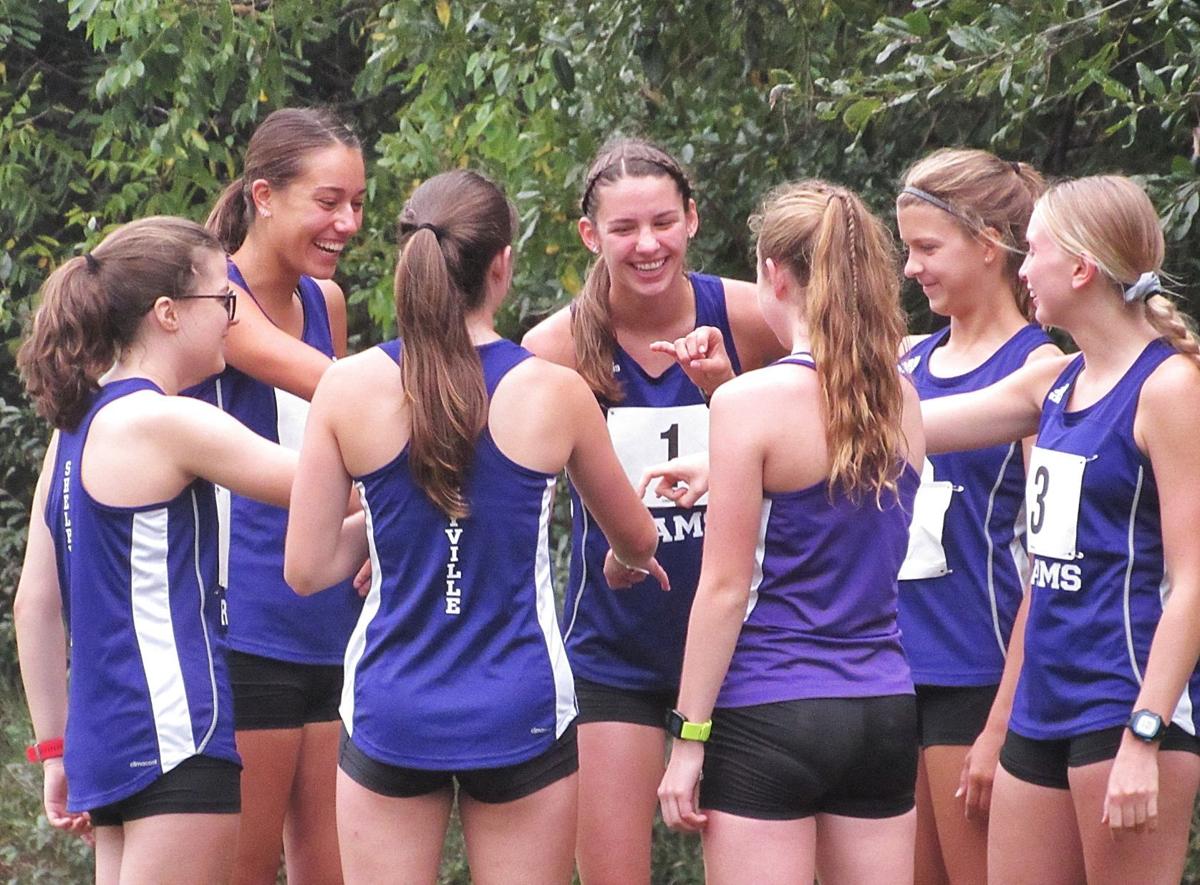 Shelbyville junior Gabrielle Spain (1) talks with her teammates before competing in the Shelbyville Invite in Shelbyville last Saturday.

On Tuesday, Richter said, he just got information for a boys golf regional and 24 hours later he learned that, after announcing in August that the postseason would end at the regional level for fall sports, the Illinois High School Association reversed course on Wednesday to allow for sectionals for boys and girls golf and boys and girls cross country.

Richter told his team before a Wednesday afternoon meet.

“It was a complete surprise," Richter said. "We’re kind of optimistic that they maybe they change their mind and let us have a state; at this rate it would be pretty nice. Just being able to move on to a sectional, we definitely plan on doing that. We definitely plan on winning the regional so we can go play in the sectional."

The IHSA Board of Directors announced the expansion to sectionals after taking a vote during a special meeting that was called to specifically address sectionals for the two sports. Still, no overall state tournament is scheduled.

“Despite the challenges of this school year, our Board has remained committed to providing the most rewarding postseason experiences possible,” said IHSA Executive Director Craig Anderson in a news release. “Given the relative success we have had safely conducting cross country and golf this fall, the Board asked our staff during the September Board meeting (September 14) to explore the possibility of expanding beyond regionals to conduct sectionals as well.”

“I’m thrilled that they’re adding another round; great for them," Vohland said. "It gives the kid another chance to compete against some of the better runners in the area. I still have to see how it shakes out. ... Overall, I’m excited that they’ve added another round but nobody knows where we're going — and that’s not a complaint — but until we see that, we'll see what the effect is. We're going to plan on running the regional and hopefully we get another week. It's exciting we could get another week."

Richter has an incredibly talented Sullivan golf team that could make a deep run as long as the postseason lasts.

“We’re really excited and relieved to at least have a sectional that it kind of gives us hope to keep playing and show these guys that they can compete at a high level," Richter said. "We’re really glad and excited, for sure."

IHSA staff attempted to maintain COVID regions and keep participant levels as low as possible when making assignments, but in some cases, generally those involving schools on or near a COVID border, schools were assigned to a tournament outside of their COVID region.

“Given the timing, our greatest challenge will be finding hosts, especially in cross country,” said Anderson. “We have been granted exemptions to compete outside the COVID Regions in instances, for example, where assigning schools on or near a region border creates better balance in the number of participants at a site. Based on the feedback we have received, we expect some schools will choose not to participate beyond regionals. We respect those decisions, but still want to provide as many opportunities as possible.”

Golf sectionals are scheduled for the week of October 12-17, while cross country sectionals are expected for October 29-31. Host sites and meet dates will be announced soon.

There were no changes made to the postseason structure for IHSA girls tennis and girls swimming and diving, which both begin postseason competition at the sectional level.

That begs the question: Is there hope for a state tournament after all if the IHSA reversed course on regionals to sectionals?

Said Vohland: “Anytime we can extend the season a little bit, it’s good for these kids. Doesn’t it bode possibly well for later on like maybe basketball getting a sectional or what not? We’ll see. We’ve got a long way to go."

Last Saturday, Shelbyville cross country runner Gabrielle Spain reminded everyone at the Shelbyville Invite that she was the best girls runner in the Central Illinois Conference.

Clinton senior Ethan Black has a secret training location that has helped him prepare for his senior cross country season.

The IHSA released a statement Friday regarding the content of a recent letter sent to Illinois Governor J.B. Pritzker and Deputy Governor Jesse Ruiz.

A little bit of flair and a lot of game for St. Teresa sophomore golfer Cody Dodson

St. Teresa's Cody Dodson carries himself with moxie and flair. It's as if he's had plenty of bad rounds in his relatively brief golf career, but nary a bad day.

The lights are off, bleachers vacated, sidelines empty and gates shut at high school football fields in Illinois.

Like a sea captain keeping his ship afloat, Rodney Walker has tried his best to keep the SkyWalker International Sport Complex open and available to athletes during the COVID-19 pandemic.

As the postseason approaches for Monticello’s boys cross country team, the season has not gone the way the defending Class 1A state champions expected.

It was hurry up and wait for Maroa-Forsyth' Mavis Wang and Serena Tuan at the Class 1A Champaign Central Sectional on Friday.

Tennis players from Mount Zion, Maroa-Forsyth and St. Teresa participate in the Class 1A Champaign Central Sectional tournament on Friday.

The status of the basketball season is in jeopardy.

In a surprising turn of events, the Illinois High School Association is pushing forward with high school basketball this winter.

As the standoff between the Illinois High School Association and the Illinois Department of Public Health and Gov. J.B. Pritzker's office continues, Decatur Public Schools teams won't be playing basketball until at least 2021.

The concrete and grass that surround Memorial Stadium should be full of people on Friday and Saturday. After all, it's tradition.

Sullivan's head coach Ben Richter is excited about the IHSA's decision to have golf sectionals this season.

Shelbyville junior Gabrielle Spain (1) talks with her teammates before competing in the Shelbyville Invite in Shelbyville last Saturday.