Decatur chosen for joint ventures of ADM and LG Chem 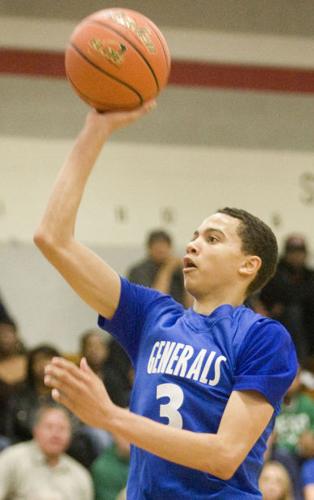 MacArthur's Marcus Bartley has used his time playing AAU basketball for the Peoria Irish to increase his recruiting interest from more than 20 Division I programs. 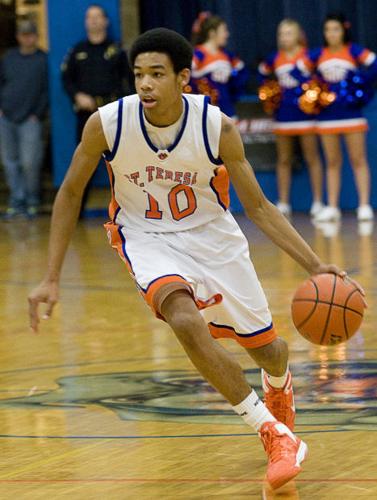 Christian Williams is playing full-time for the Peoria Irish this summer, and his AAU basketball run is getting him some big-time Division I looks.

Marcus Bartley became a highly sought-after Class of 2014 point guard prospect last summer after playing AAU basketball for the Peoria Irish, and the MacArthur senior-to-be now has interest from more than 20 Division I programs and scholarship offers from high major teams like Northwestern, Oklahoma State and DePaul.

And as the interest in Bartley has grown, so has the Irish’s pipeline into Decatur. Bartley was the lone full-time Decatur player with the Irish last spring and summer. This year, he’s one of seven.

St. Teresa juniors-to-be Christian Williams and Patrick Althoff (a transfer from Bloomington Central Catholic) are playing for the 16U team, incoming MacArthur sophomore Keymonta Johnson is joining the 15U team for the final month of the AAU season and three incoming Decatur freshman — Deion Norfleet (MacArthur) and JaColby Boston and Jason Duncan (St. Teresa) — are teammates on the 14U Irish squad.

Bartley and Williams were actively recruited to play for the Irish — something program director and coach Gavin Sullivan said the program does to insure a lineup of top prospects. The younger Decatur players made the 14U team after a tryout. A good relationship with MacArthur coach Felipe Phillips landed Johnson on the Irish this month.

“It’s pretty much like a fraternity of coaches,” Phillips said. “We know each other’s programs. We both trust one another. As a high school coach, you like AAU programs that preach defense because a lot of times it’s all offense. Gavin definitely pushes the defensive end.

Even with the influx of Decatur athletes, they are all still following Bartley. Sullivan said he told the Generals’ point guard when he was a freshman that he had a chance to be a Division I player.

Three years later, Bartley is about to realize that opportunity. Sullivan said Bartley’s biggest maturation is in his shot and his shift to being a more vocal leader. His size — Bartley checks in at around 160 pounds despite being 6-foot-4 — is the only real knock against him, and he’s had to fight that “eye test” from college coaches.

“If Marcus had Christian’s weight (175 pounds), he would have offers from every school in America I think,” Sullivan said. “Marcus is going to be one of those players that will change a lot in college when he gets stronger.

“You could always see his length and skill set. Being that tall and lanky and being able to handle the ball the way he does, a lot of teams can see him being a (point guard), a combo guard or even play him as a (shooting guard) in their system.”

Bartley credits his time with the Irish for the interest he’s gained from Division I programs. He said if he hadn’t played for the Irish, the interest wouldn’t be as high.

“We had a lot of great players on our team,” Bartley said. Summer teammate Michael Finke (Champaign Centennial) is committed to play for Illinois, while other big men like Devon Sabo (Pleasant Plains) and Normal U-High twins Kane and Malik Wildermuth have all drawn some Division I interest. “Teams were already coming to watch us, so if you played well they’d see you too.”

Like Bartley, Williams has seen his college stock rise in his first full summer with the Irish after playing a few tournaments last year. He caught Fighting Illini coach John Groce’s eye at a University of Illinois team camp, has interest from Iowa, made visits at Illinois State and Bradley and picked up a scholarship offer from the latter in the process.

And Sullivan said Williams has started to find the aggressive streak to really take over games — something he flashed during his sophomore season at St. Teresa but wasn’t always present.

“He’s had some big games against some highly-ranked guys this year,” Sullivan said of Williams. “He’s starting to take it kind of personal that, ‘This guy is better than you supposedly. Are you going to prove him wrong?’ He’s done a great job of being an aggressor.

“With him also going from 6-3 to 6-5, there’s some things that you just can’t teach. He’s got a lot of skill, too, as far as ball handling and seeing the floor. I think people are seeing he’s a big, skilled wing player.”

The Irish participated in three tournaments apiece in April and May, but AAU basketball essentially shuts down in June while players rejoin their high school teams for camps and shootouts.

Peoria is back in action starting this week at the NY2LA Next Level Invitational in Milwaukee. The Irish will return to Milwaukee from July 17-21 for the NY2LA Summer Jam and finish their summer in Fort Wayne, Ind., from July 24-28.

“It’s my last month of AAU, so I definitely have to go out with a bang and play my very best and hopefully show more college coaches what I can do,” Bartley said.

Those final tournaments give the seven Decatur players a few more opportunities to showcase their talent on a larger stage. For Bartley and Williams, that means more time in front of Division I scouts to bolster their recruiting, and for the younger Decatur players it’s more time to prove they can play at that level.

“Obviously, the more you play and at the higher level you play it’s going to make you better no matter what,” Sullivan said. “Christian and Marcus, every year they’ve been better when they come back. Those young guys have got to follow those footsteps of how hard they’ve worked.”

Phillips said he’s starting to see the return on the basketball court from his players playing top-level AAU basketball during the summer. In addition to the players on the Irish, incoming sophomore Dallas McClain is playing for the Southwestern Illinois Jets in Belleville.

“With Decatur, we’re so far behind the other cities in the state because our kids don’t get a chance to play at that high level where you’re playing a top player every game,” Phillips said. “To know there’s guys on the team that are as good as you or you’ll be sitting the next game, it’s good for them mentally. That’s something we’ve definitely been lacking in Decatur.”

The Generals were 13-4 this summer with a win over state champions Sacred Heart-Griffin in summer league play.

Watch now: Aiden Riser's move to Maroa-Forsyth running back has been a long time coming

Riser will be one of two players that Trojans head coach Josh Jostes has starting on both sides of the ball.

After just missing the playoffs, MacArthur football will have fresh faces on offense

Transfers Brylan McHood-Jones, from Argenta-Oreana, and MJ Murphy, from Warrensburg-Latham, could play big roles for the Generals.

The Panthers are 2-40 in the past five seasons but they won their Week 9 game last season.

Quarterback Makobi Adams and receiver Brayden Trimble will be key to the new-look Braves team this season.

In summer workouts, Maroa-Forsyth football tweaks its offense with some personnel changes

Notably, All-State linebacker and tight end Aiden Riser will be the Trojans go-to rusher in the fall.

Construction is on schedule to be done August 26, head of the team's first home game in Week 2 against Belleville Althoff Catholic on Sept. 2.

Haurberg is focused on increasing participation numbers and moving away from a spread offense strategy next season.

"She's a legend," says Rafael Nadal on Serena Williams ahead of her retirement

MacArthur's Marcus Bartley has used his time playing AAU basketball for the Peoria Irish to increase his recruiting interest from more than 20 Division I programs.

Christian Williams is playing full-time for the Peoria Irish this summer, and his AAU basketball run is getting him some big-time Division I looks.