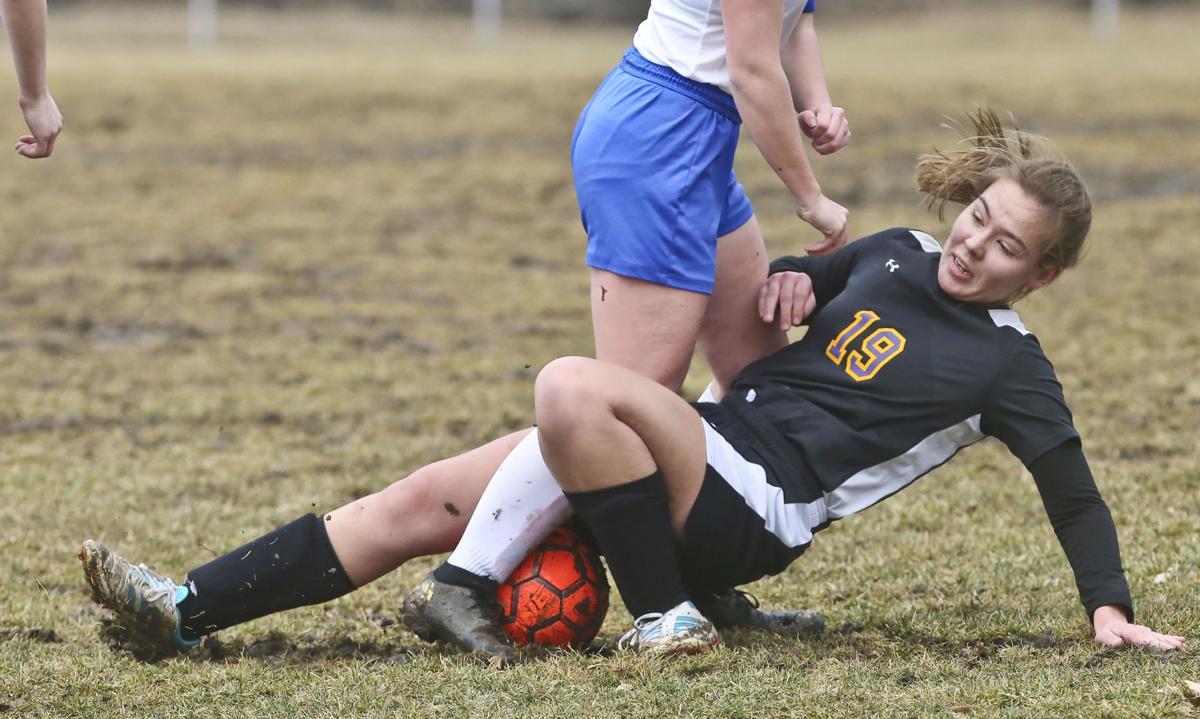 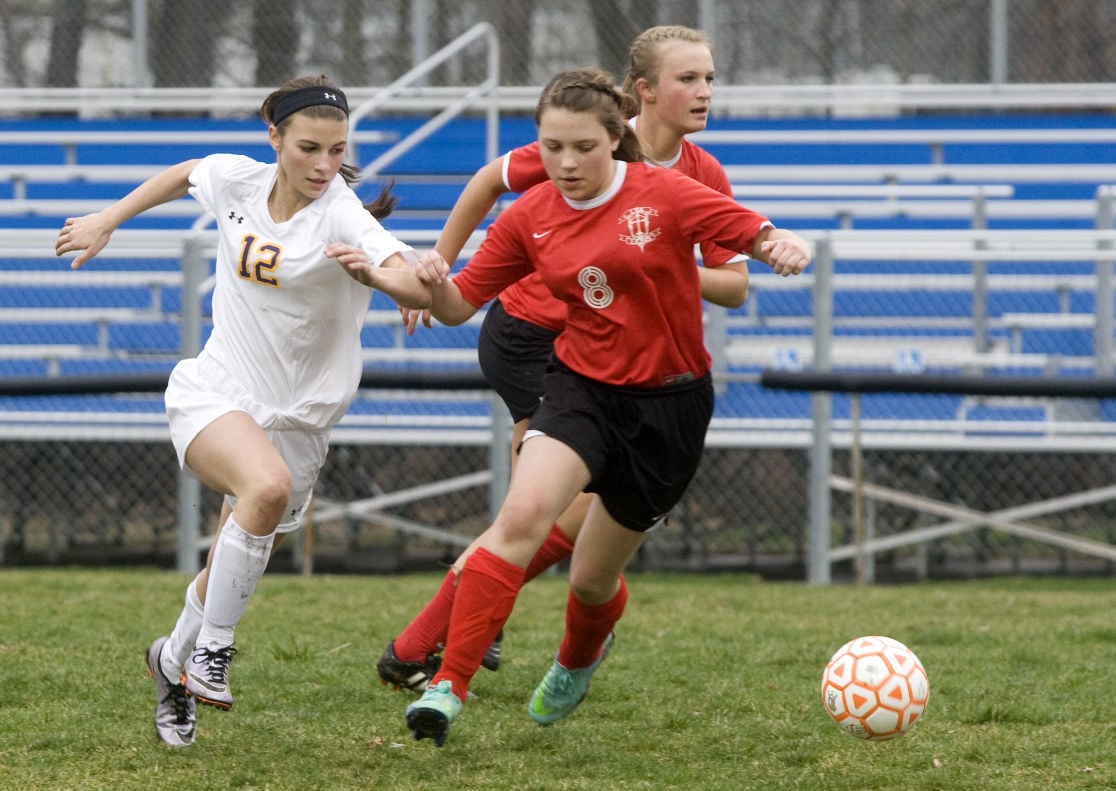 Monticello's Mia Maupin and LSA's Isabella Salefski race for the ball. Maupin is the Sages' all-time leading scorer with 94 goals. 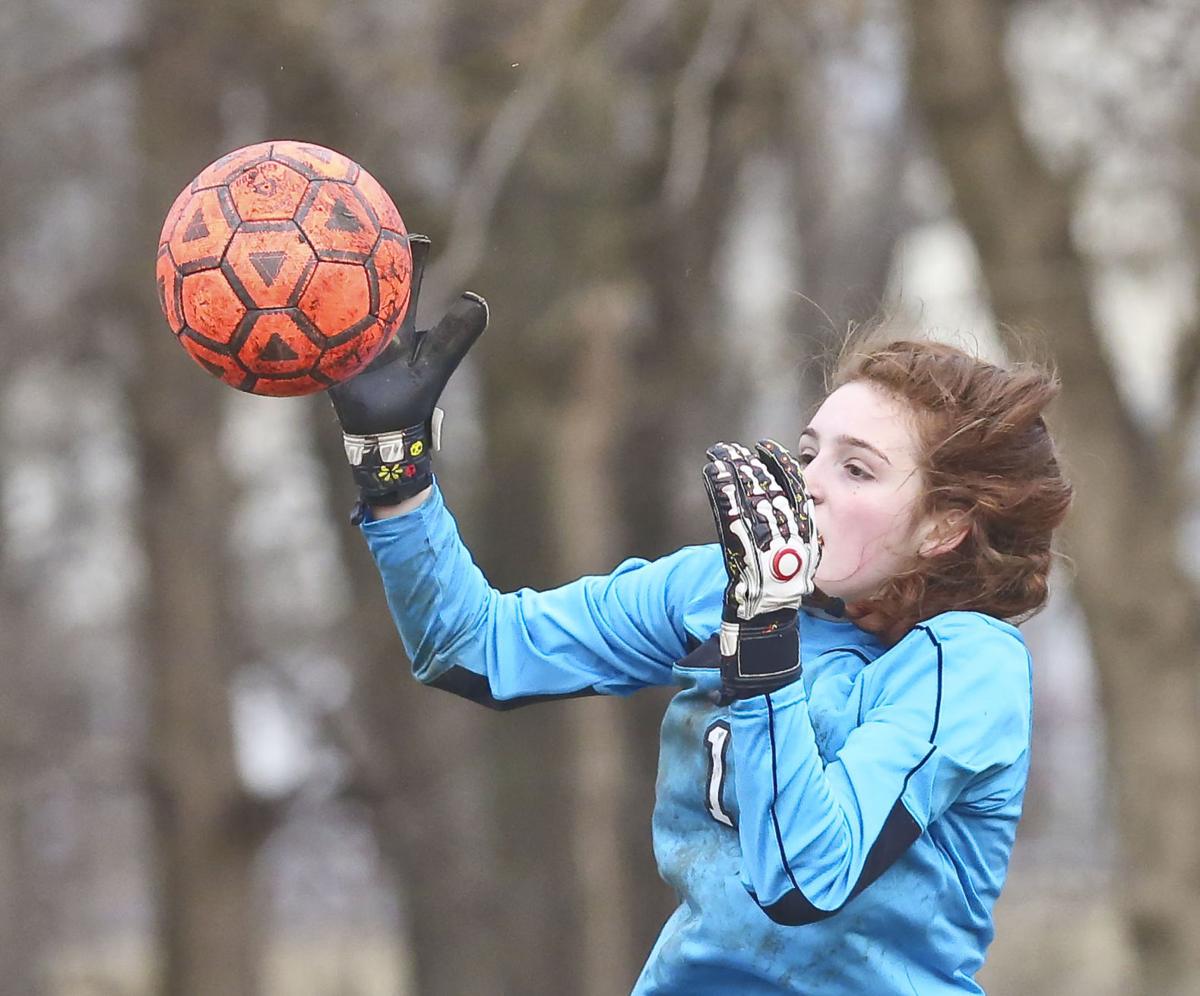 Monticello's keeper Emmie German saves a ball during the St. Teresa Tournament. Thanks for German's play, the Sages have allowed 32 fewer goals this season.

MONTICELLO — When opponents take the field against Monticello’s girls soccer team, there is no doubt who they are zeroing in on.

Mia Maupin, the Sages’ senior forward, has made a case as the greatest player in program history. Her 94 goals are the most in school history and she has already set a new single-season scoring record this year with 30 goals, breaking her old record of 28.

But this season, the Monticello girls have found an offensive and defensive balance that has eluded them. Led by junior defender Kalyn Prather and freshman goalie Emmie German, the defense has allowed 32 fewer goals this season than last year and the Sages are near the top of the Illini Prairie Conference. The up and coming squad will be tested as they will face No. 1-seeded St. Teresa in the Class 1A Champaign Judah Christian Regional semifinal Wednesday at 5 p.m.

When David McDaniel, a former coach for the Decatur YMCA, took over the program two seasons ago, he had his work cut out for him. The Sages (8-12-1, 4-2-1 Illini Prairie) haven't fielded many winning teams and have really struggled in recent years. Their only regional title came in 2008-09.

“The last few seasons have been three, four, five wins, and so it has been tough," McDaniel said. "If you are a kid coming out you might not be that interested, so it has been our goal to build the program.

“I think the girls know they are getting better. The main goal is to build the program, get girls interested and teach it in a way where we are having success and not just going through the season.

"This is our best season in 10 years and the school knows. At Monticello football and track are continually good and so that’s one of our goals — to be that for our soccer team and be as competitive with those teams."

In previous years, the Sages lived or died on the foot of Maupin, but this year the offense is more balanced. Six other players have gotten in on the scoring, including sophomore midfielder Milly Machinchy with eight goals. Maupin now leads the team in assists with seven.

"This year I’m pretty satisfied with myself in my ability to facilitate," Maupin said. "In years past it has been debatable if I could find other players. I’ve enjoyed assisting to them and this year my focus was to find my other teammates and see what they can do

"In terms of the four seasons that I’ve been a part of the program, this has been the most memorable and progressive from a team standpoint. I have really enjoyed seeing the development of all of my teammates in the backfield, offensively, all across the board."

The defensive improvement has been key for the Sages in practice and McDaniel turns to Prather to dominate the backfield.

"Kalyn's overall understanding on defense and being comfortable being a leader is important to that group," he said. "She has three years of experience and she is a tough player and is very vocal. A coach would want 25 Kalyn Prathers on their team."

Prather is constantly on the lookout for any advantage she can glean from the action that is happening in front of her.

"I like to be able to view the whole field and I can see it all from the back and I’m able to better myself and better the team by watching and picking up on how people play and picking up on things that people do," she said.

The goalkeeper play of German — the freshman has five shutouts this season — has kept the Sages in games they used to be blown out in, but her success wasn't a surprise to her teammates who had heard about a strong middle school keeper.

"We had heard about her in the off-season and we knew when she was in middle school that she was going to be important to the team," Maupin said. "I played against her in club and I could tell she was going to step into the leadership role."

German, and the rest of the team, look to Maupin as the rock the team can depend on.

"(Mia's) definitely a very good leader and a great example for the team," German said. "She sets a very high standard and I think that is pushing us. She’s a great teammate. You want to have her on your team but you definitely don’t want to have to play against her.

"I knew I was coming into a team that hasn’t had a lot of success, but I have always wanted to play for the Sages. I’ve been looking forward to playing for them since I started playing soccer. I always looked up to these girls and I really want to help this team out as much as I can."

Maupin, who will play soccer for the Division II's University of South Carolina-Aiken next year, is hoping to leave a lasting impression with the team that is more than her name in the record books.

"Being the all-time leading scorer is statistically one thing, but for me it is about leaving the program better than I found it and inspiring the girls in middle school that are a little bit directionless in what they want to play in high school," she said. "I hope that it inspires someone to try and beat me, I want some little girl now to want to beat my scoring record.

"The goals are fun and I like beating my own records or other people’s records but I would much rather have in 10 years to come back and see some girls out there kicking butt and taking names."

See Page B3 for a look at the area regional pairings.

DECATUR — There were any number of easier goals available for the St. Teresa soccer team, but the Bulldogs couldn't find the back of the net.

MONTICELLO — Garrett Dixon is a cross country coach's dream runner — a vocal leader who is also the hardest working athlete on the team.

MONTICELLO — Passing by the Monticello High School wrestling room during the team’s first practices in early November, you could have thought …

AREA FOOTBALL COACH OF THE YEAR: Monticello was the sum of the whole under Cully Welter

MONTICELLO — Cully Welter made it a point to absorb everything during the week leading up to the Class 3A state championship.

Led by Andrew Ellison, Monticello boys soccer has flipped the script this season

MONTICELLO — Andrew Ellison has surprised a lot of people this season — even himself.

Monticello's Mia Maupin and LSA's Isabella Salefski race for the ball. Maupin is the Sages' all-time leading scorer with 94 goals.

Monticello's keeper Emmie German saves a ball during the St. Teresa Tournament. Thanks for German's play, the Sages have allowed 32 fewer goals this season.