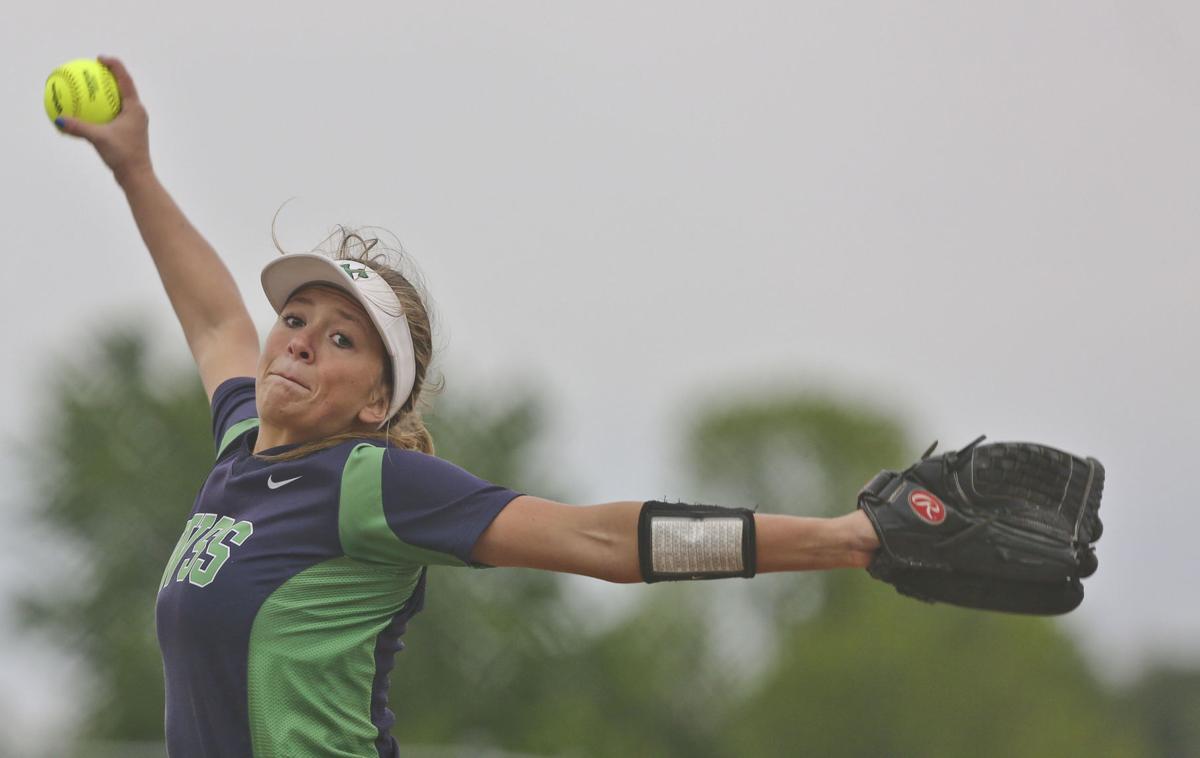 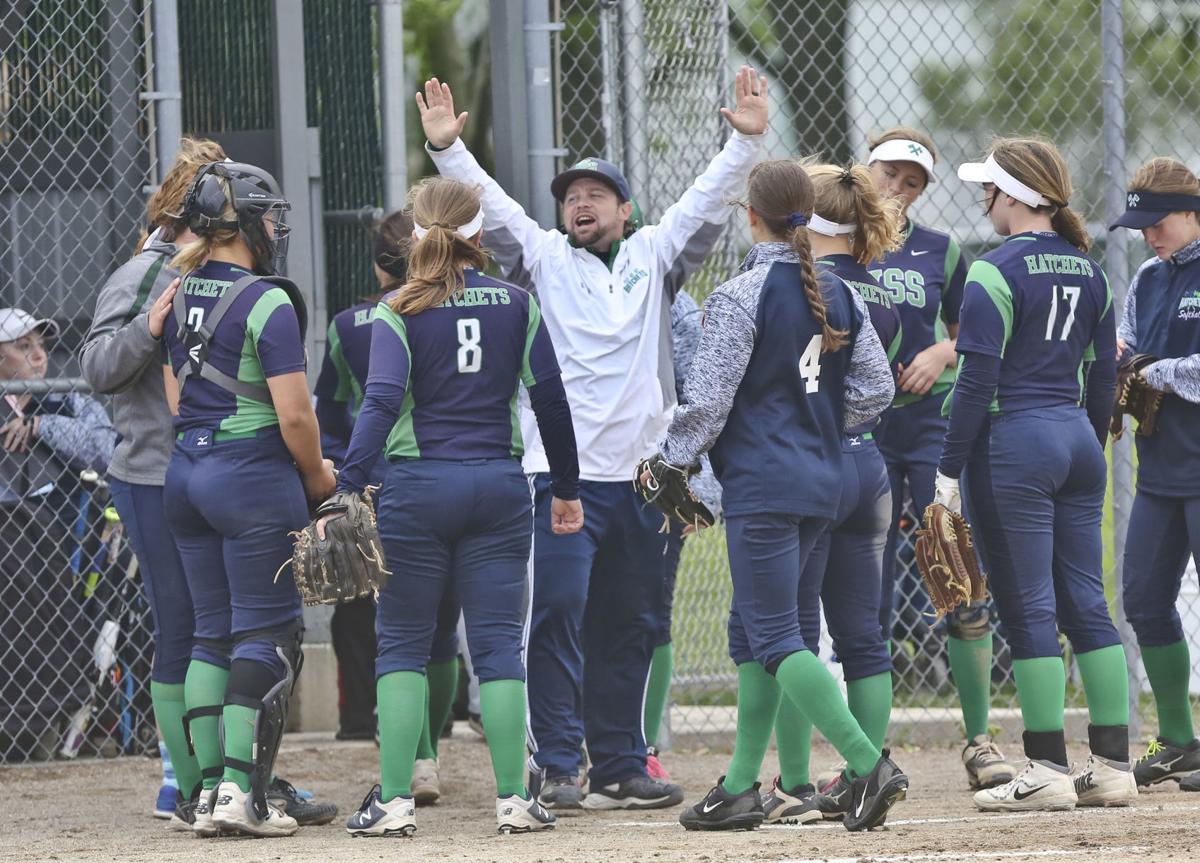 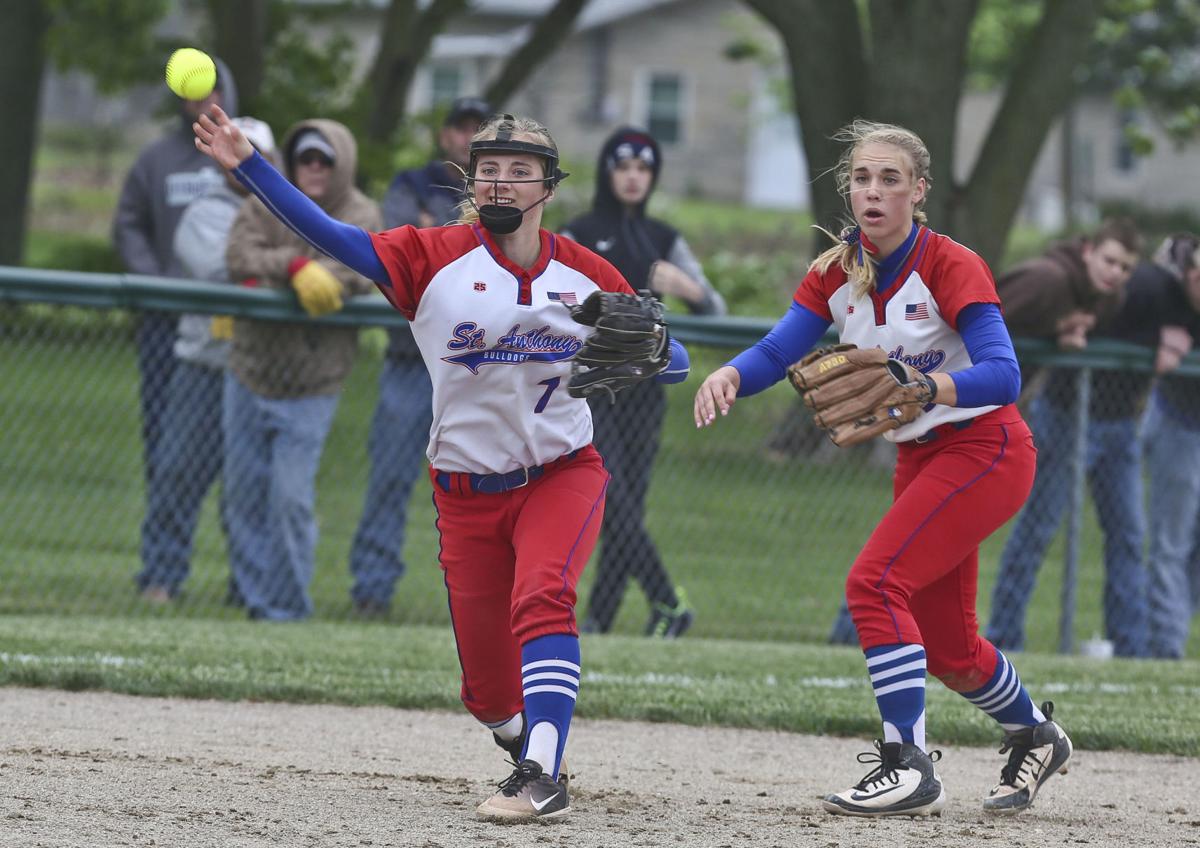 Effingham St. Anthony's Grace Karolewicz (7) makes a throw to first against Windsor/Stewardson-Strasburg on Tuesday at Meridian. More photos at www.herald-review.com 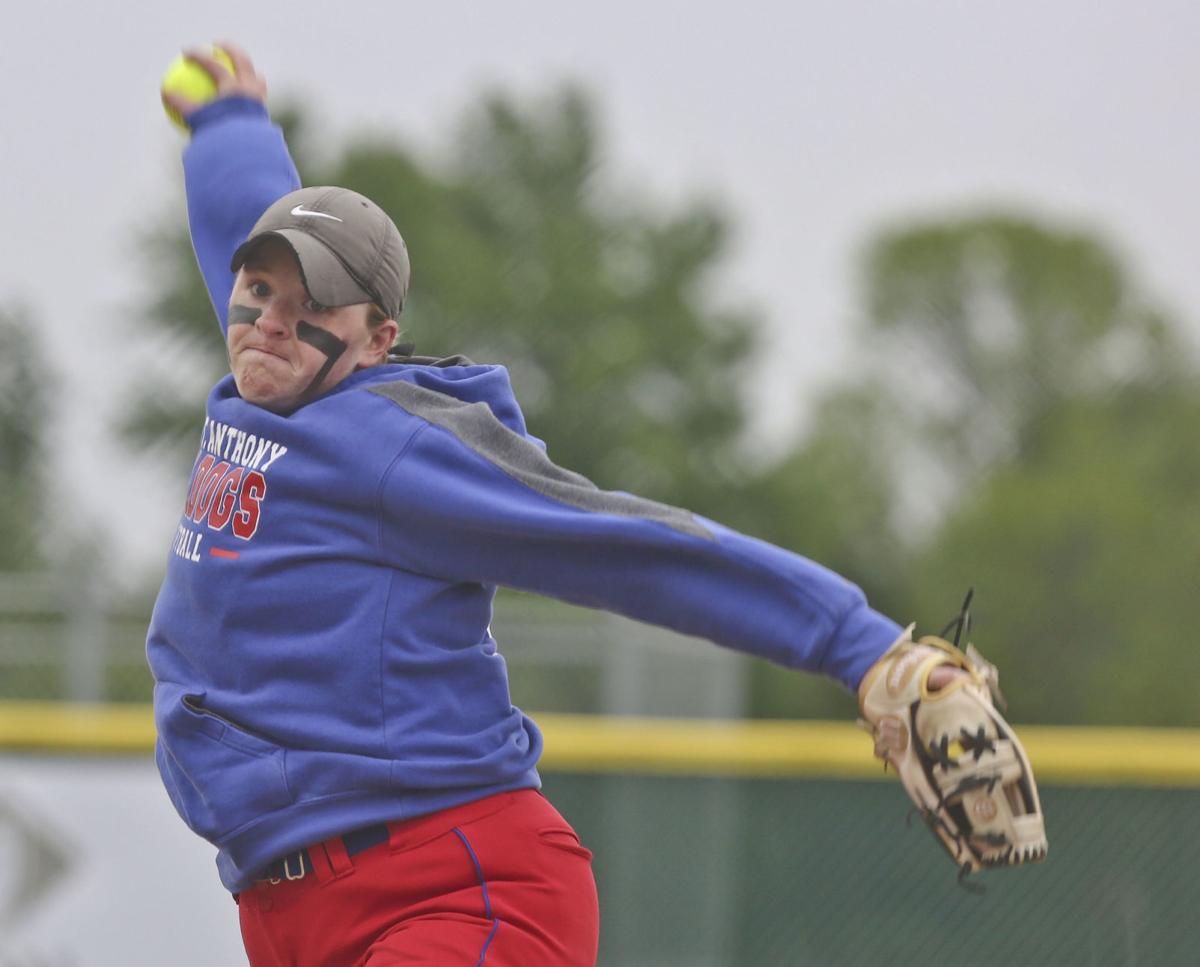 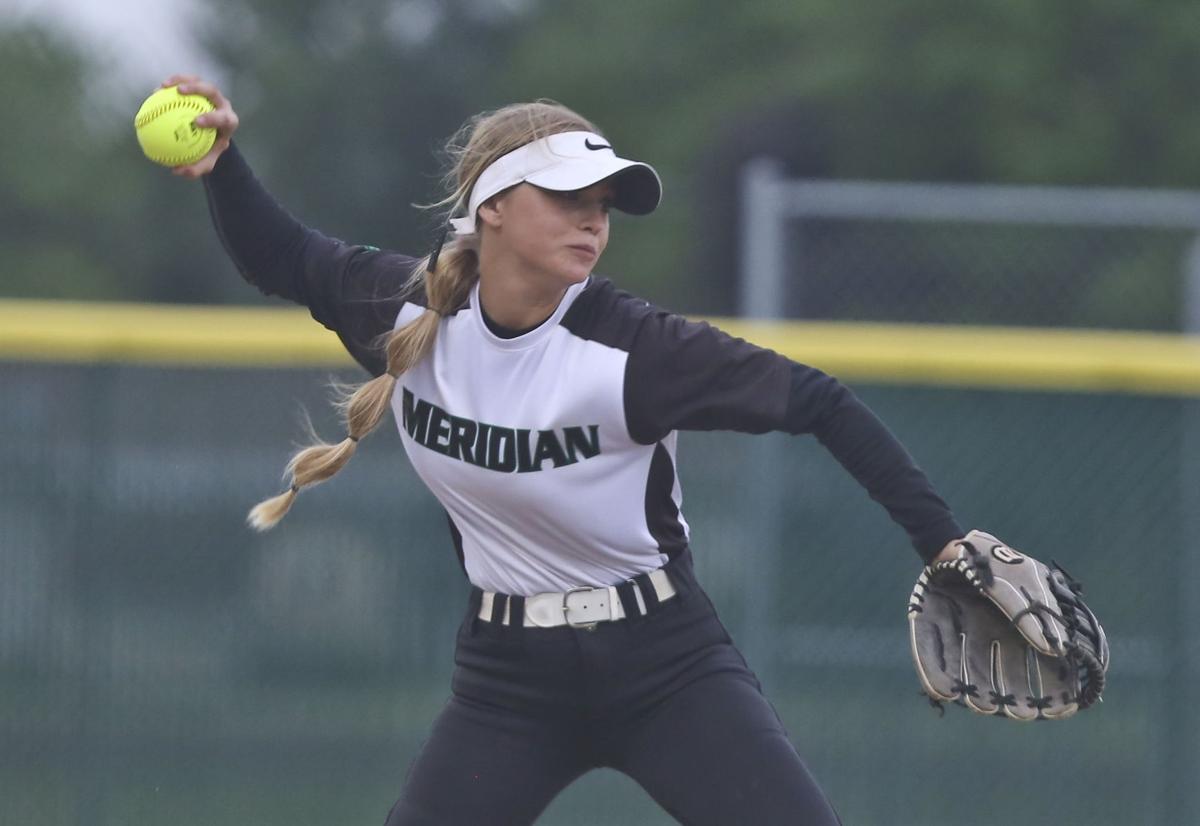 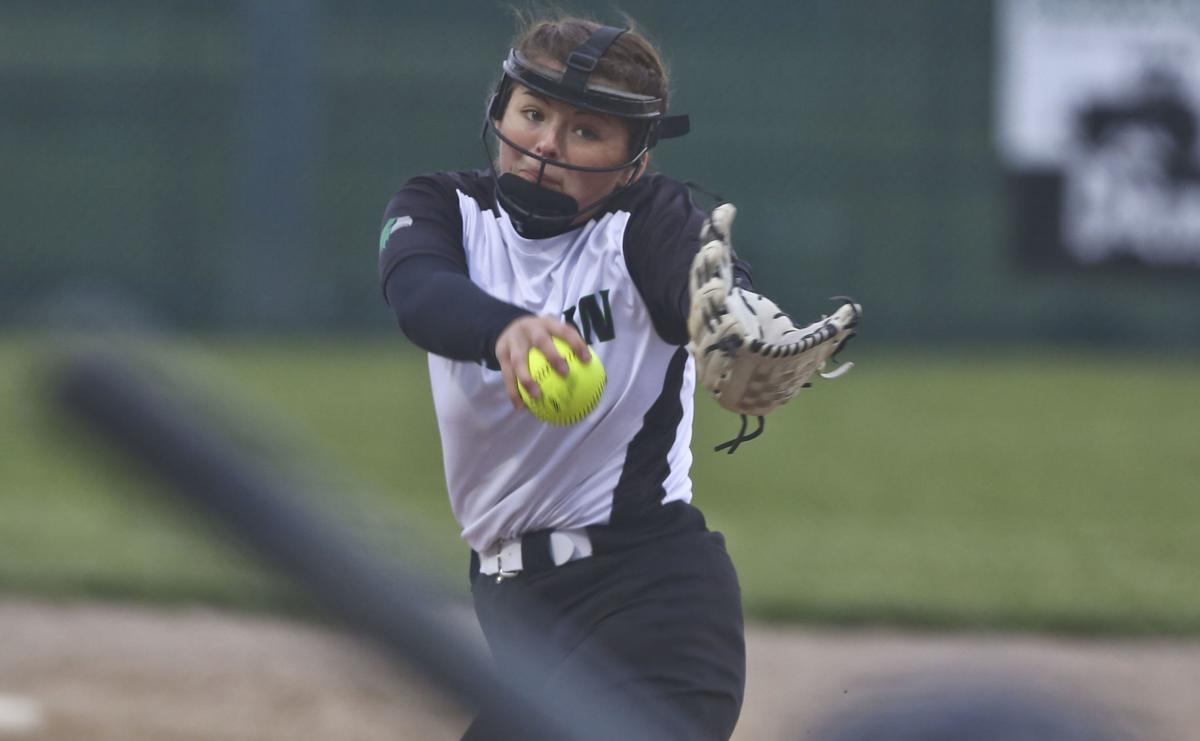 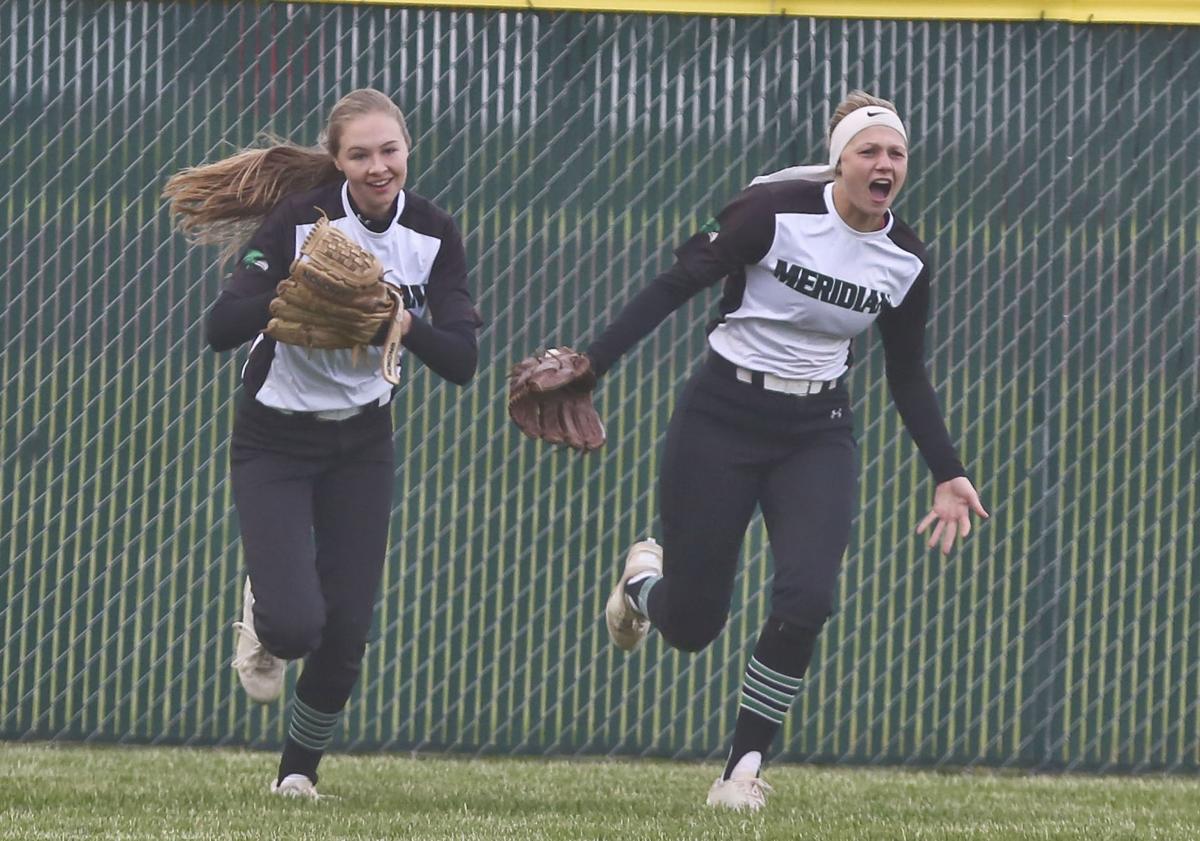 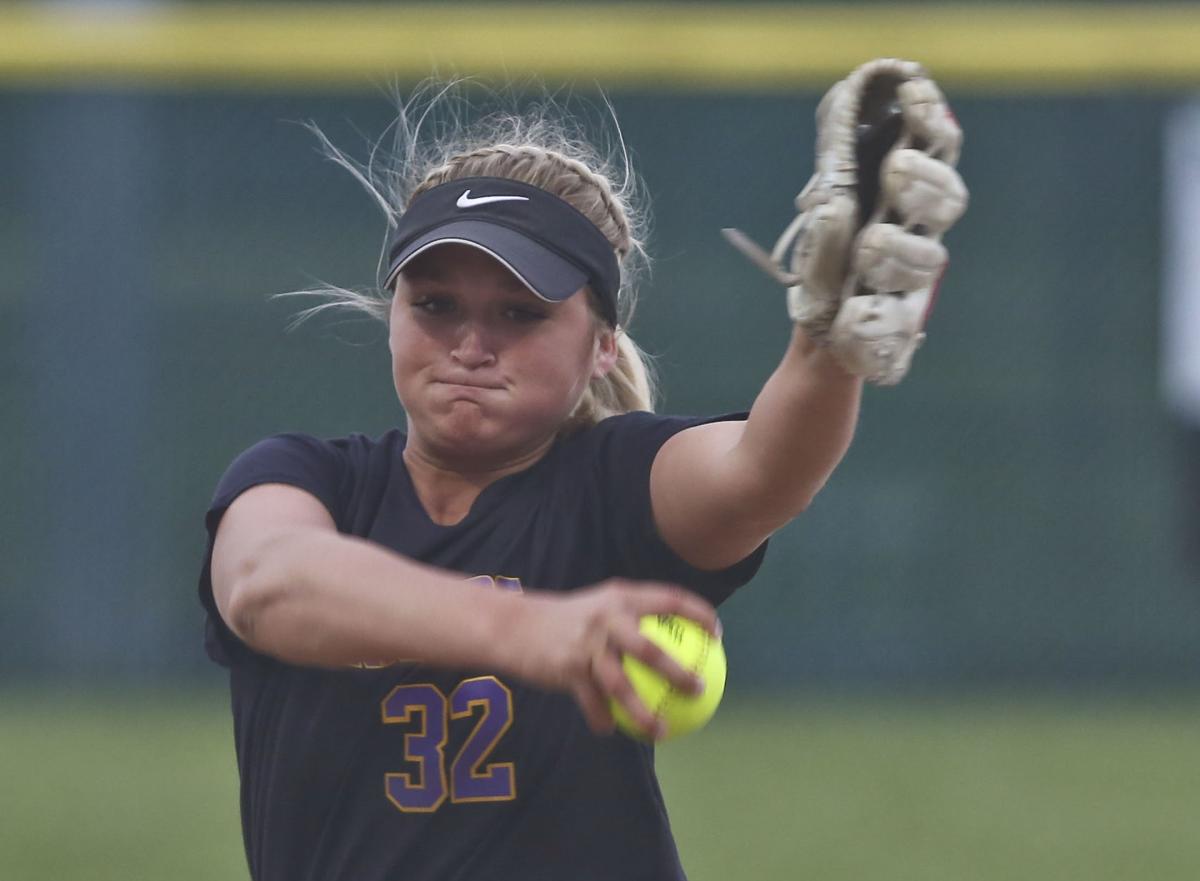 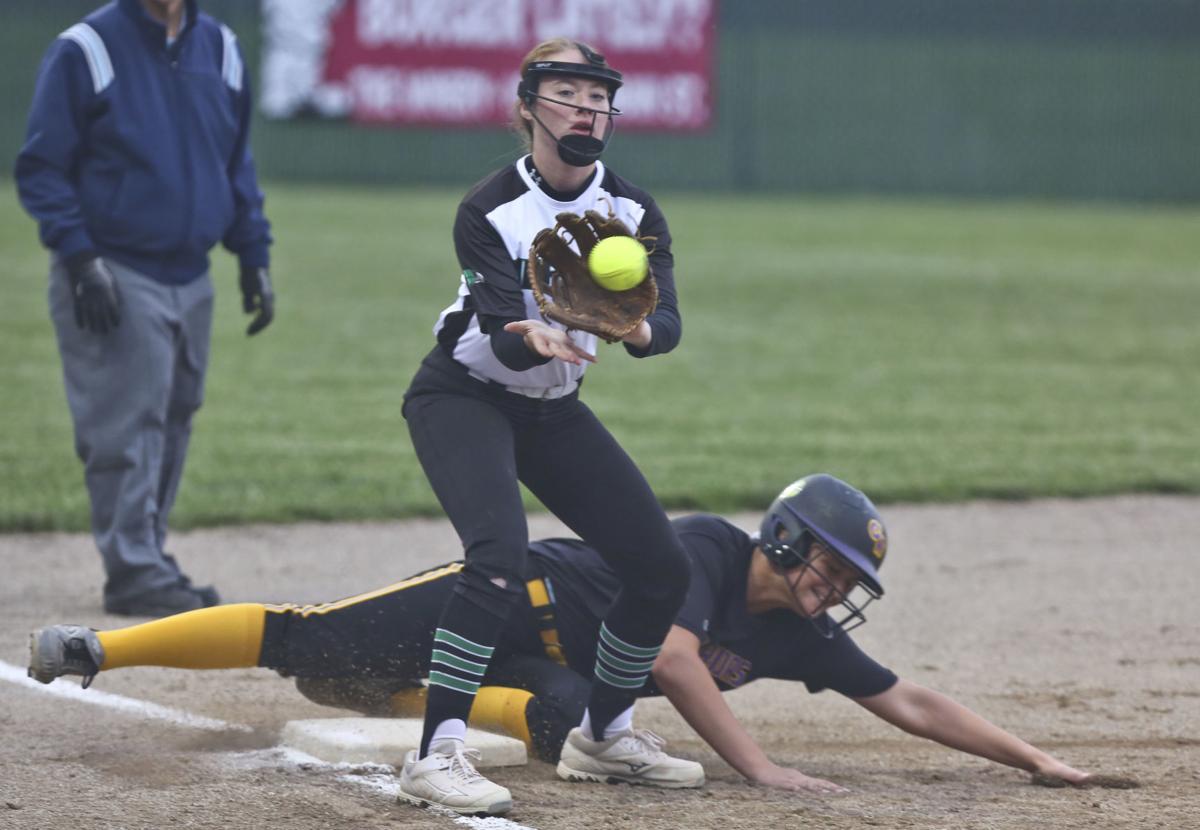 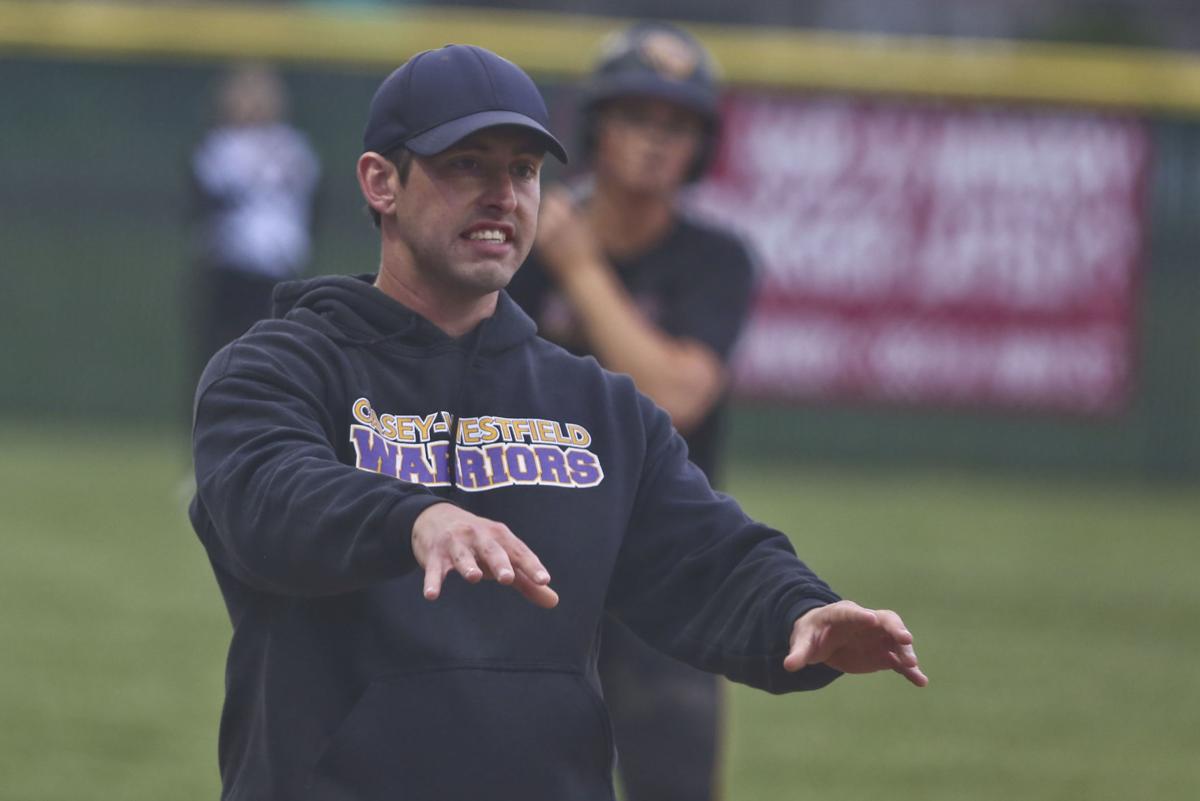 Casey-Westfield's head coach Dalton McFarland calls out a play against Meridian on Tuesday during Sectional at Meridian High School. More photos at www.herald-review.com 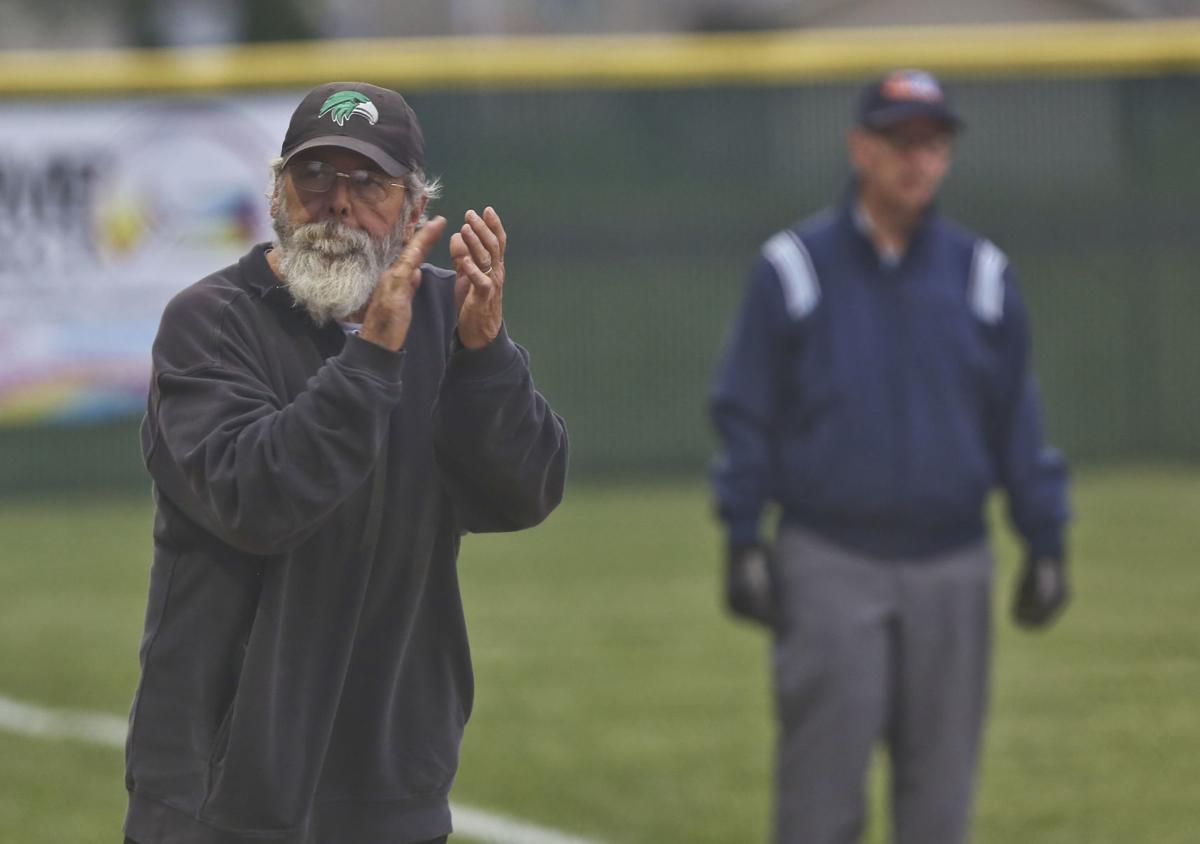 Meridian's Greg Steeval cheers on his team while at bat agaisnt Casey-Westfield on Tuesday during Sectional at Meridian High School. More photos at www.herald-review.com 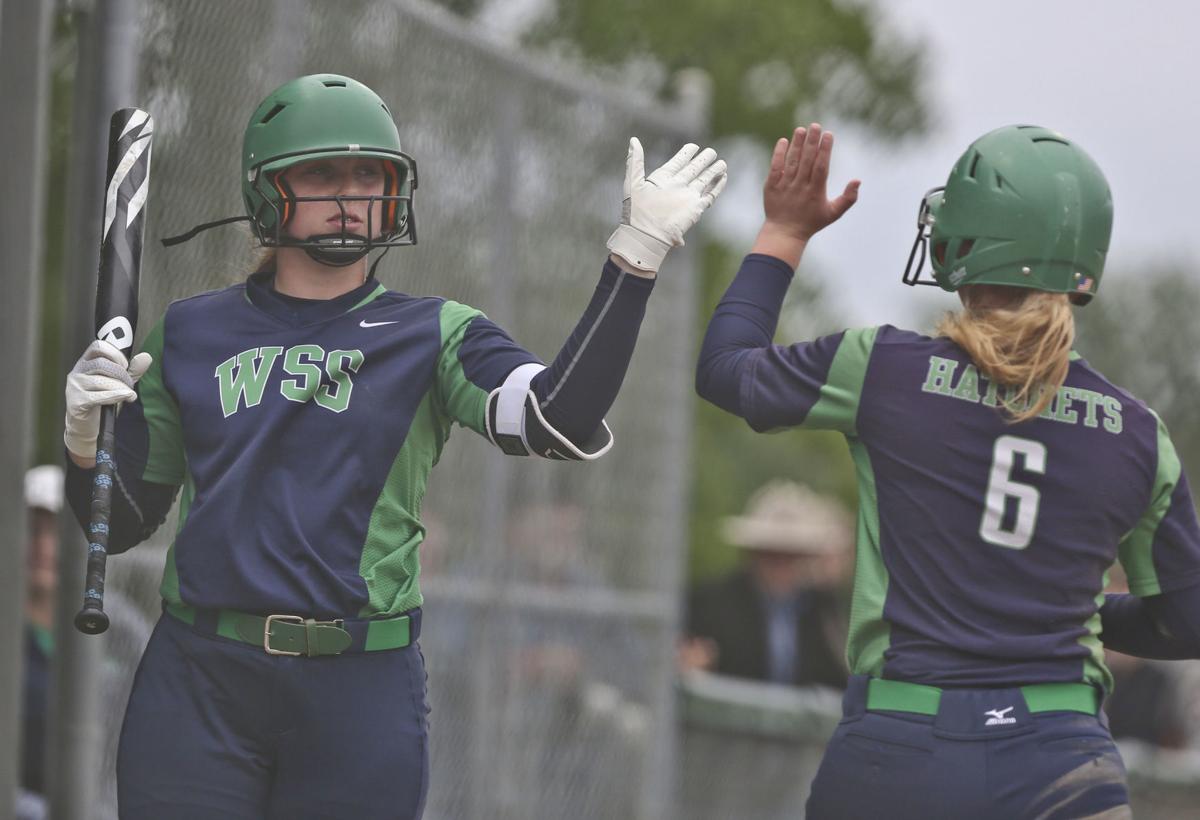 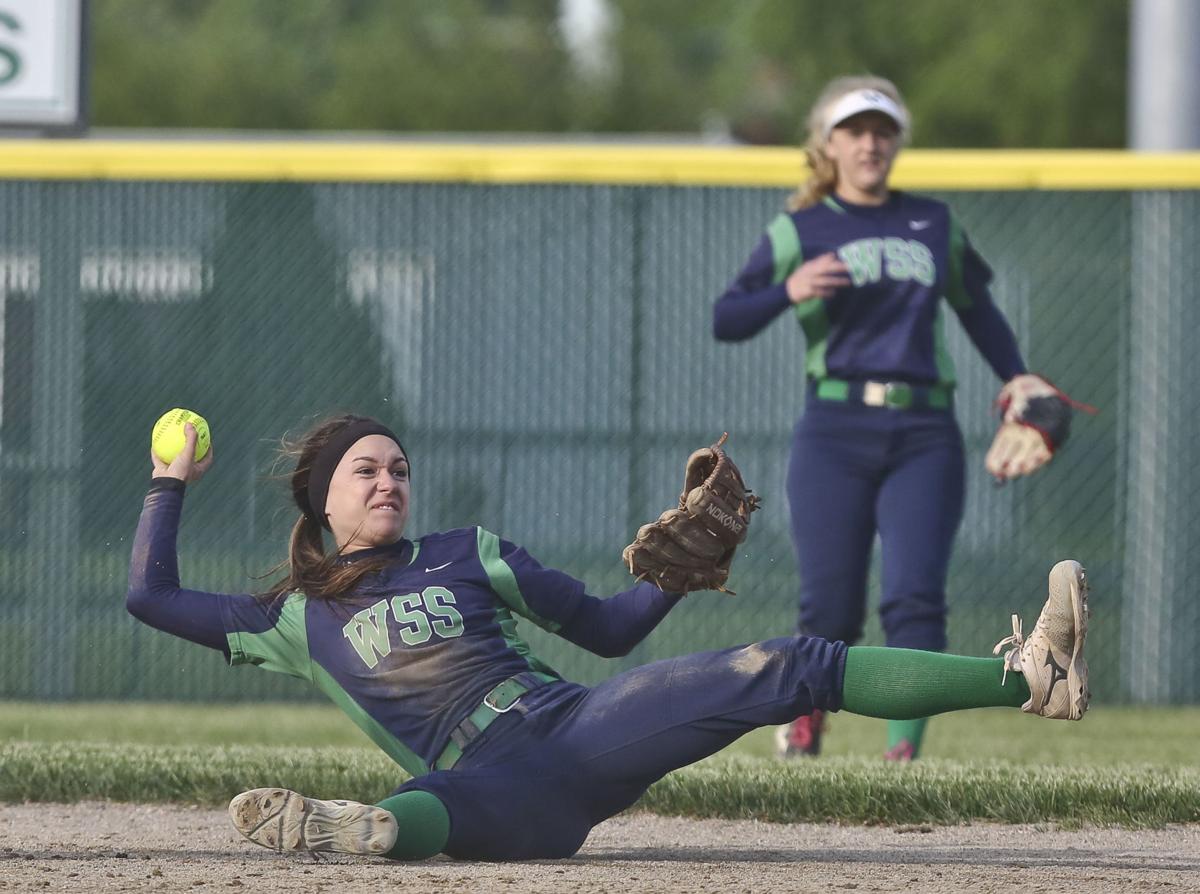 Windsor/Stewardson-Strasburg's Ava Bennet makes a throw in the sixth inning vs. Effingham St. Anthony on Tuesday at Meridian. More photos at www.herald-review.com

MACON — Craig Moffett stood behind the dugout of the Meridian softball field and inhaled to search for an answer for which words simply couldn't answer.

What makes the pitching rotation of his Windsor/Stewardson-Strasburg softball team so good?

“They are very talented," Moffett said after pursing his lips together and exhaling, but before crediting his assistant coaches and all of the coaches his pitching triumvirate have encountered during their careers.

In Tuesday in a 9-0 Class 1A Macon (Meridian) Sectional semifinal win against Effingham St. Anthony, Moffett used every weapon in his rotation. Megan Schlechte was officially credited with the win for pitching the first two innings, allowing two hits, no runs and striking out four.

Then came Calla Roney, who threw three of her own dominant innings, allowing three hits while also striking out four. Then came freshman Karlie Bean, who pitched the final two innings, allowing just one hit and striking out the side in the bottom of the seventh to send her strikeout total to four. The final strikeout sent the Hatchets (35-1-1) to their third straight sectional championship game.

In 17 postseason innings, the Hatchets have allowed zero runs.

Each are a little different, but each are equally dominant. Schlechte moves the ball around the zone with precision, Roney is the flamethrower and Bean is a mix of both.

“We all know we have a job to do," Roney said. "We’re all really different pitchers, but we all do a good job of getting it done when we need to. Today, we all threw one time through the lineup and they had no idea what to expect. That’s awesome to me. We have three pitchers who are more than capable of pitching against anybody here."

Moffett won't stand up and proclaim himself an expert in the field of softball pitching. He's got strong assistant coaches around him and talent in the circle to clean up any mistakes.

"They’re good, but they’re also extremely competitive," Moffett said. "They’re really good at dealing with adversity. If a call doesn’t go their way or if there’s a miscue in the field, they do a great job of coming back with another pitch. It’s that bulldog mentality in the circle and they all three have it."

In total, St. Anthony (19-9-1) strung together four hits and had runners on early, but couldn't crack the pitching puzzle of the Hatchets. Moffett unleashed all three heads of his pitching monster to keep them sharp.

“They’re good with one pitcher to begin with, but then you add two more," St. Anthony coach Crystal Tipton said. "If one of them is not throwing it like they want, they go to the next one who is equally as dominant. They’re just powerful. That’s all you can say."

Offensively, the Hatchets scored in every inning except the sixth. Carson Cole set the tone at the top of the order, going 2-for-4 with two runs scored and three RBIs, and Ava Bennett drove in a pair of runs including a solo home run.

But Cole was the catalyst. When she's going, the Hatchets quickly follow.

“When she gets on base, that sets the table for the rest of the lineup," Roney said. "We have a really strong lineup one through nine. When she gets on, I know we’re going to score that runner. Some how, some way."

The second game of the night between Casey-Westfield and Meridian will resume at 6 p.m. Wednesday, weather permitting. It will resume with one out in the top of the fifth inning with Casey leading 1-0. The game was initially delayed because of lightning and later postponed.

Casey (23-8) got its run in the second inning when starter Claire Maulding scored on a wild pitch. Maulding allowed three hits in four innings of work against Meridian and struck out seven.

The winner plays W/SS on Friday in the sectional championship game.

Photos from the Macon Sectional

NEWTON — Mackenzie Brown is on some sort of tear right now.

MOUNT ZION — The game simply could not come soon enough for Chayse Ramey.

STRASBURG — It started as a chance to go back home.

EAST PEORIA-- In just its third year of existence, the Windsor/Stewardson-Strasburg co-op earned its first state championship, dethroning the …

MACON — Freshman Karlie Bean celebrated the moment with a fist pump in the pitcher's circle.

AREA SOFTBALL PLAYER OF THE YEAR: Windsor/Stewardson-Strasburg senior Megan Schlechte does it all

Effingham St. Anthony's Grace Karolewicz (7) makes a throw to first against Windsor/Stewardson-Strasburg on Tuesday at Meridian. More photos at www.herald-review.com

Casey-Westfield's head coach Dalton McFarland calls out a play against Meridian on Tuesday during Sectional at Meridian High School. More photos at www.herald-review.com

Meridian's Greg Steeval cheers on his team while at bat agaisnt Casey-Westfield on Tuesday during Sectional at Meridian High School. More photos at www.herald-review.com

Windsor/Stewardson-Strasburg's Ava Bennet makes a throw in the sixth inning vs. Effingham St. Anthony on Tuesday at Meridian. More photos at www.herald-review.com