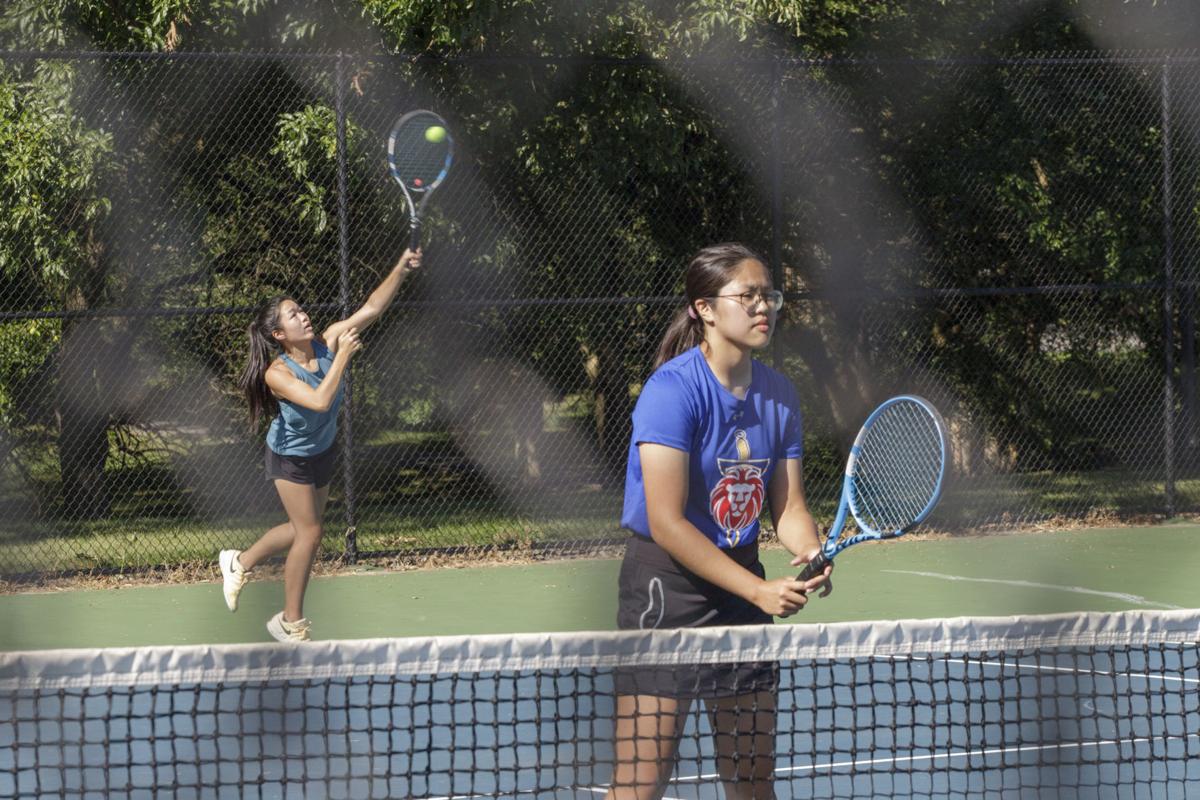 The Maroa-Forsyth girls tennis doubles team of Serena Tuan, back, and Mavis Wang made a trip to state last season and hope for a tennis state tournament this year. 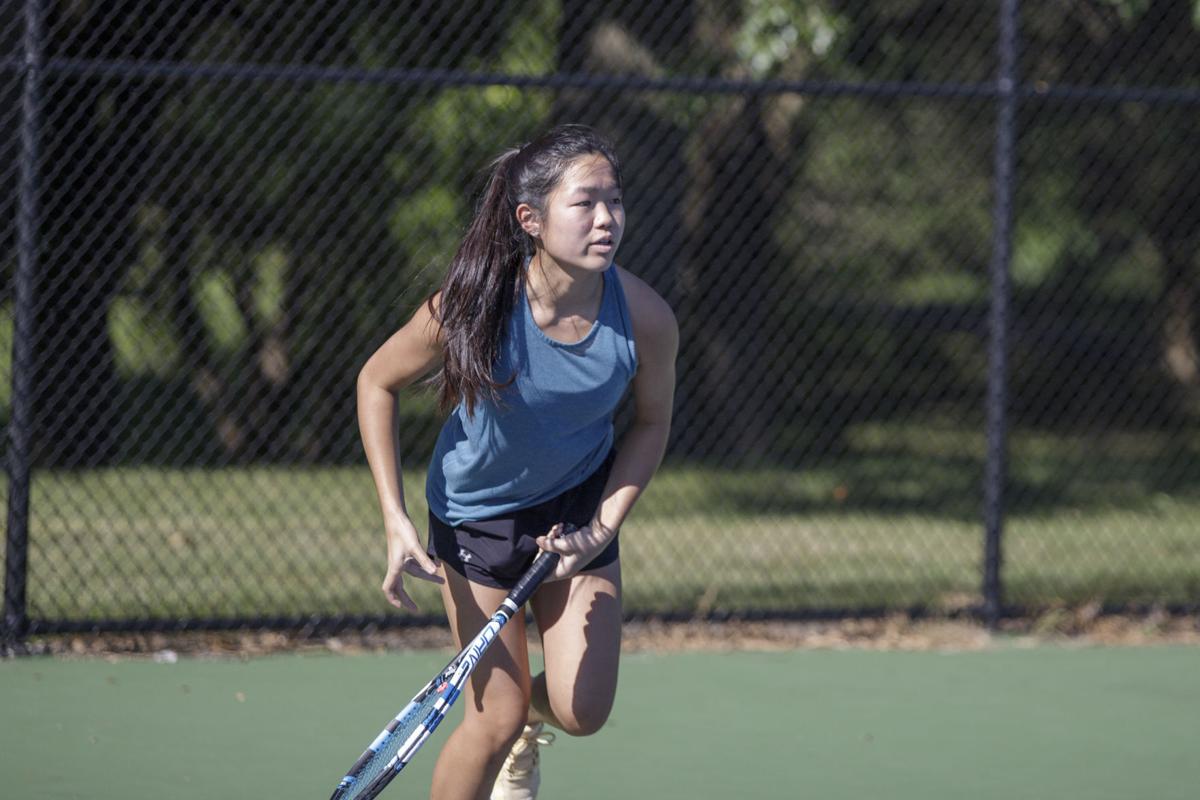 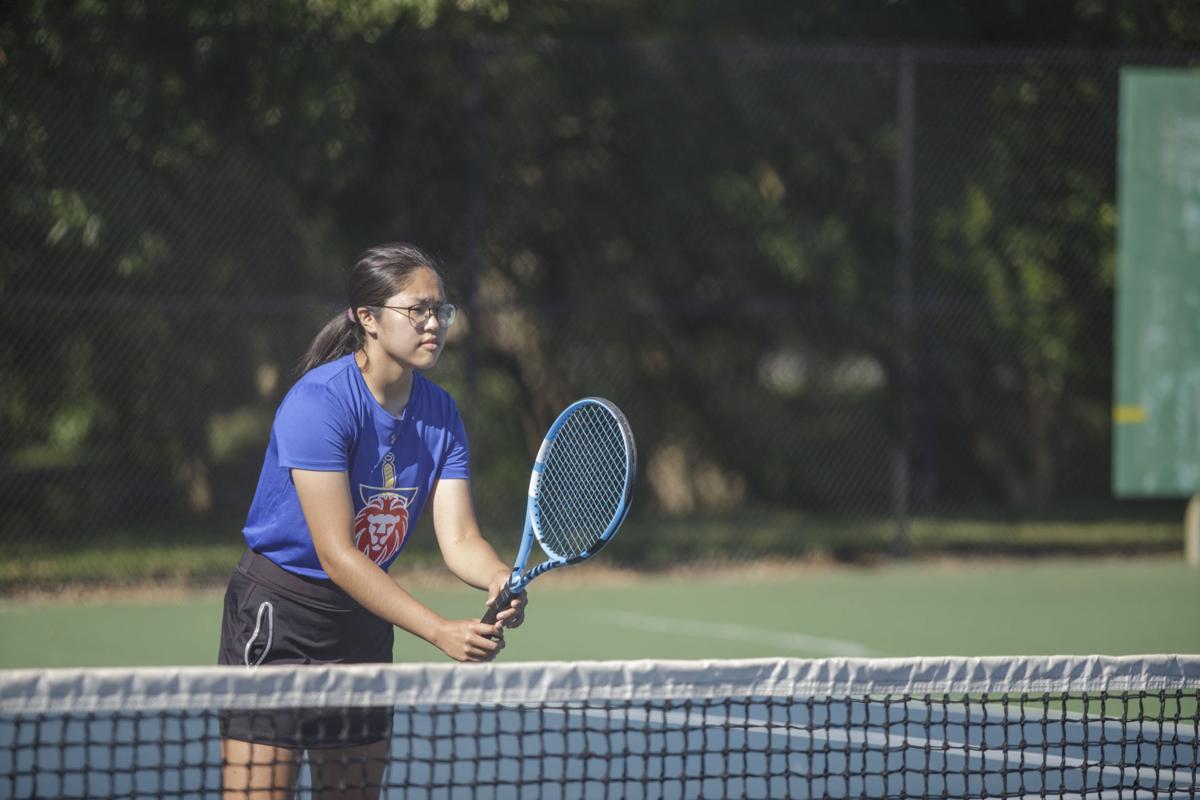 Maroa-Forsyth senior Mavis Wang isn't slacking off even with an uncertain future of the state tournament.

FORSYTH — A small speaker sat near the net on the tennis court at Forsyth Park and music pumped out of it as Mavis Wang and Serena Tuan took their spots they know all too well.

Wang, the taller of the two, stood near the net, racket in hand, ready to bash away any practice volley that came her way. Tuan patrolled the back area of the court. It was a sense of normalcy all athletes have desperately lacked for months because of the fight against the novel coronavirus.

Though tennis largely can go on without many different rules put in place by the Illinois High School Association, the Illinois Department of Public Health and the governor's office, things aren't entirely normal for the Maroa-Forsyth doubles team that qualified for state last season, the first trip to state for a Maroa-Forsyth girls tennis player. Practices didn't start until Aug. 10 and they said they didn't spend much time hitting together in the offseason. On top of that, the status of a state tournament is to be determined, at best.

“This year we won’t have state if we did get there so that would be a big change and that’s also kind of sad," Tuan said.

That doesn't mean Mavis, a senior, and Tuan, a junior, are going to take their foot off the gas.

“We’ve just got to practice like everything is going to be the same, just doing our best no matter what happens," Wang said. "If it does get canceled or rescheduled, then we’ve got to be ready for what happens next."

They complement each other perfectly on the court; Tuan is a lefty and Wang is a righty and their personalities mesh on the court. The tandem started playing on a doubles team together last year, but it wasn't immediate. They started last year by playing singles and doubles, though they each had different doubles partners.

Former coach Cheryl Vandevoorde and then-assistant Susan Wu, who is now the team's head coach, decided after about three weeks to pair Tuan and Wang together. It didn't take long before the two got to their winning ways, a relative surprise to pick up such chemistry so quickly.

“Our strengths just kind of worked well together," Tuan said. "She’s better at net and I’m better at baseline, so that worked well."

Said Wu: “It was at least the middle of the season we realized they could go pretty far as doubles partners."

The two have known each other for a while, and Wang said she knew of Tuan as her sister's friend for a while. They started playing tennis together once high school started and got to know each other a bit more. Was the run to state surprising at all given how new they were as a doubles team?

“Yes and no because at practice we were pretty strong compared to the other girls we played with on our team," Wang said. "We were kind of like, ‘Oh, if it works out here it may work out.’"

Maroa-Forsyth co-ops with LSA, though LSA has no athletes on this year's team, Wu said. The expectation is to have a regional tournament with hopes of a sectional and state tournament. Tuan understands the sheer volume of tennis players from all over Illinois at the state tournament and said her hope for having the tournament is dwindling.

Tuan will have another season in high school; hopefully one that isn't affected by a global pandemic. This is it for Wang, who said she doesn't intend to play in college.

“I guess right now it’s like playing for fun but I still have to try my best; even if there isn’t a state tournament it doesn’t mean I should slack off, especially since it’s my senior year," Wang said. "Just make the best out of it."

Preparation is key with uncertainties ahead.

“If something does change and we’re able to have a state tournament, that's wonderful and hopefully we’re able to make it again this year," Wu said.

PHOTOS: Maroa-Forsyth students through the years

How Teutopolis landed a one-year stay with the Apollo Conference

When major college sports began going to a conference-only schedule earlier in the month, Teutopolis Athletic Director Laurie Thompson could see the writing on the wall.

TAYLORVILLE — Teutopolis will join the Apollo Conference ... for a year.

The IHSA can keep alive the spirit of a 'state title.' Here's how.

The Illinois High School Association will be handing out hardware this fall.

It was hurry up and wait for Maroa-Forsyth' Mavis Wang and Serena Tuan at the Class 1A Champaign Central Sectional on Friday.

The Maroa-Forsyth girls tennis doubles team of Serena Tuan, back, and Mavis Wang made a trip to state last season and hope for a tennis state tournament this year.

Maroa-Forsyth senior Mavis Wang isn't slacking off even with an uncertain future of the state tournament.