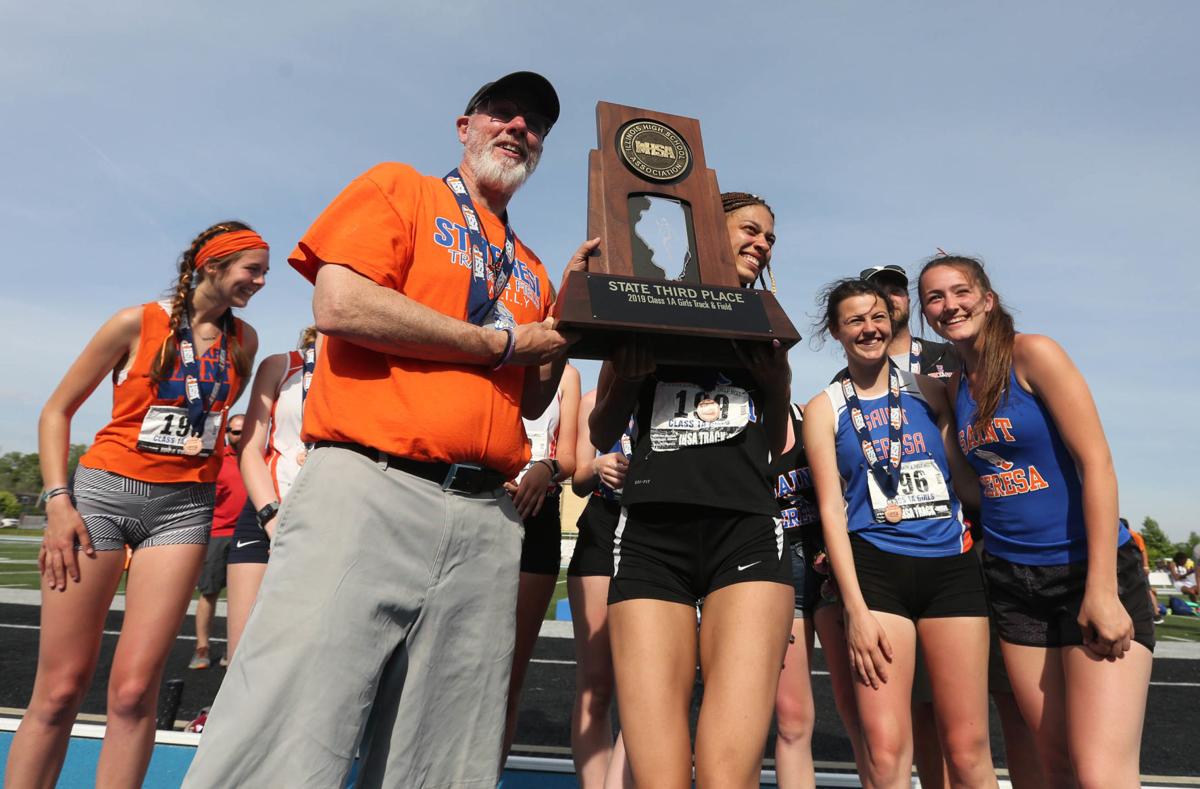 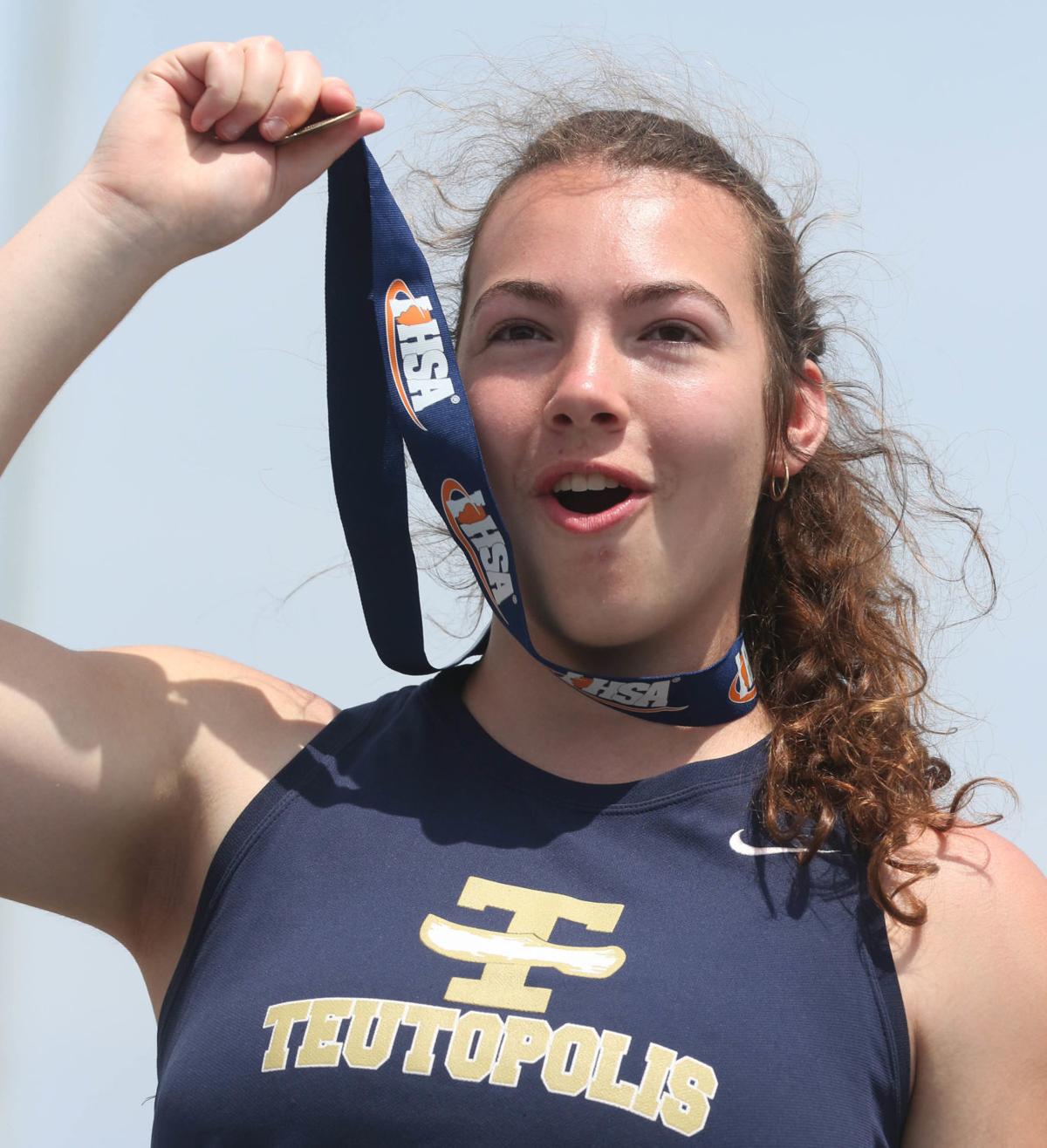 Teutopolis' Claire Bushur celebrates after winning the discus throw on Saturday at the Class 1A girls state track and field state finals at Eastern Illinois University in Charleston. More photos at www.herald-review.com

CHARLESTON — DaeLin Switzer was frustrated. In fact, she really didn't want to continue on with the Class 1A girls state track and field finals in Charleston on Saturday after not winning the high jump.

Switzer, a St. Teresa senior who is signed to run at Northern Illinois University next season, finished third in the high jump. It was the first time in her high school career she didn't win.

It hurt. But St. Teresa coach Todd Vohland was instrumental in helping Switzer regain her composure and finish in second in the 100-meter hurdles (14.40), 300-meter hurdles (43.75) and in the 200-meter dash (25.09). Those finishes, combined with Noelle DeJaynes' seventh-place finish in the shot put and sixth-place finish in the discus, led the Bulldogs to a tie with St. Joseph-Ogden for third place in the team standings. The Bulldogs won third outright last season.

"They were like, ‘Look, you’re not a quitter. You still have three more events. You can still win those three and do your best in those three,'" Switzer said. "That’s exactly what I did."

Switzer broke three school records, including two of her own in the 300 hurdles and 200, and finally got the elusive school record in the 100 hurdles, which was set by Jayne Godfrey in 2010.

“After coach talked to me I was like, ‘You know what? I’m going to use all this frustration from high jump and I’m going to go out there and kill it.' That’s what I did," Switzer said.

She left Charleston as one of the most accomplished female athletes in Macon County history.

“It there’s a better female athlete that’s come through Macon County, and we’ve had some great ones, I haven’t seen her," Vohland said. "The different events she can do and excel in, and she's a three-sport athlete."

St. Teresa was packing up its tent to leave Charleston when Vohland decided to check the team scores one last time during the 4x400-meter relay — the final event of the day. Vohland was "totally in shock."

DeJaynes finished 11th in both shot put and discus last season and wanted to atone for that. She threw 39 feet, 9.25 inches in the shot put on Saturday for seventh and 127-6 in the discus for sixth.

“After last year at state not going at all like I hoped it would, this is a great way to kind of undo all that," she said. “I came in to this season and my goal was to medal in both events and I was able to do that, which is awesome."

Said Vohland: “She had a great flippin’ day. I told her the other night that she’s one of the great stories in the state. … You’re talking about a girl who is missing part of her right arm, which is by birth her strong arm. To go out and throw and medal and go on and get to throw in college (at DePaul) is amazing."

Teutopolis junior Claire Bushur did a little extra warming up in the shot put. She had to get her adrenaline going. It was absolutely more than usual and it worked.

She finished second with a throw of 44-3.75 and launched the discus 133-10 to win that event outright. Entering Saturday she knew it was a realistic goal, but on Thursday she was nervous. She had a history of scratching in the discus, but it didn't matter Saturday.

"That’s what my goal was," she said. "I’m really glad to know that I actually achieved what I wanted to."

In the 3,200-meter relay, Shelbyville's Ailey Mitchell knew she just had to keep her pace. Chicago Latin freshman Ava Parekh was too far away to catch and if Mitchell kept her own pace, she wasn't going to be caught by anyone in sight.

She cruised to second with a time of 11:20.75 with still some energy in the tank. And in the final 100-meters of the 1,600-meter run, she channeled that to kick past her competition and into third place behind Marianne Miahs and Parekh, both of Latin.

“The endurance," Mitchell said. "That’s all I really do. I just had to dig in deep.

“I’m really happy with it. I’m just really excited to be here and do so well."

There was about 2 hours, 25 minutes between races. If it were up to Mitchell, she would have gone one right after another. She was ready to run.

“It was kind of torture," she said. "I really just wanted to run. I just wanted to get it over with and be done. I’m happy I am now. The nerves are just bad."

Warrensburg-Latham junior Brittney Oakley added the triple jump to her schedule and made for a busy Saturday, but wasn't much of a deterrent.

She entered the field as the No. 8-ranked long jumper and vaulted up to fourth with a jump of 17-11.25. The rest was kind of a haze. She was back-and-forth between triple jump and the 4x100-meter dash.

The Cardinals finished sixth in the 4x1 and Oakley finished ninth in the triple jump with a leap of 36-9.

“Triple wasn’t the best because I just got done running 4x1 and I just scratched my last one," she said. "Overall, I still placed and it’s my first year doing triple, it’s pretty good."

MONTICELLO — She was never an understudy. Instead, Monticello's Landis Brandon has spent the last two years as the best actor in a supporting role.

MACON COUNTY GIRLS TRACK ATHLETE OF THE YEAR: St. Teresa's DaeLin Switzer is ready for her next chapter

MACON COUNTY GIRLS TRACK COACH OF THE YEAR: Todd Vohland had the Bulldogs on the podium again

DECATUR — As the 2019 Class 1A Girls State track meet was winding down, St. Teresa track coach Todd Vohland had his team packing up their stuf…

Teutopolis' Claire Bushur celebrates after winning the discus throw on Saturday at the Class 1A girls state track and field state finals at Eastern Illinois University in Charleston. More photos at www.herald-review.com