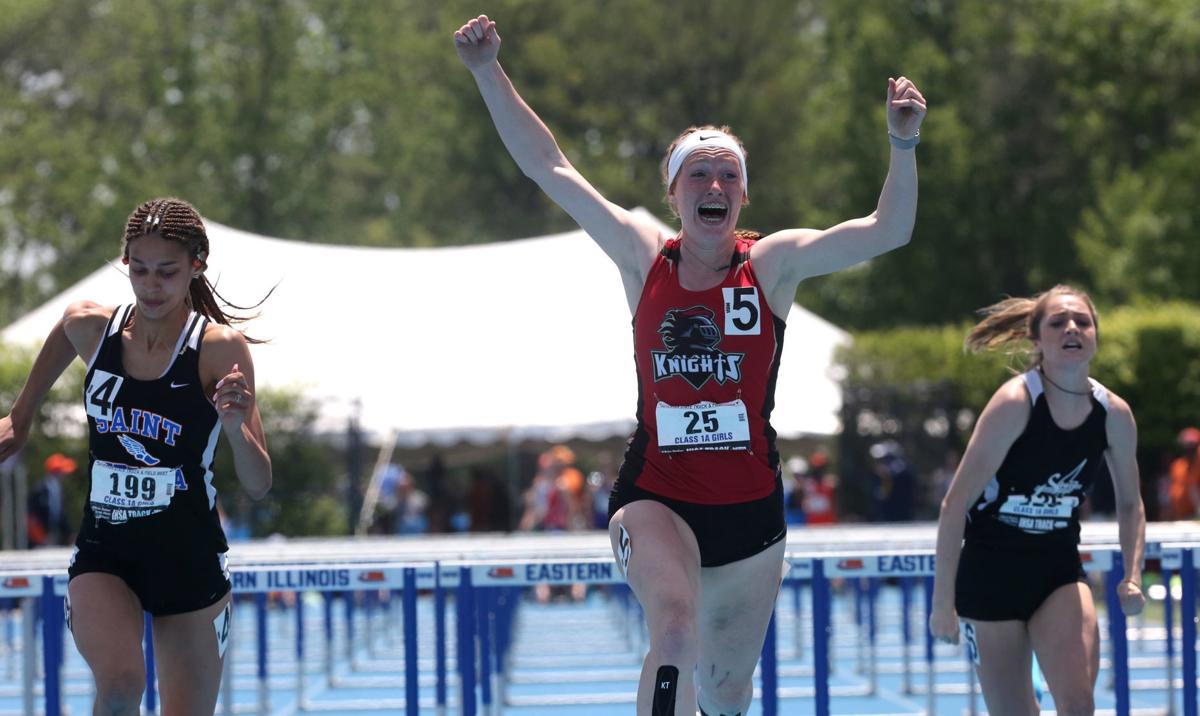 Kenli Nettles of Arthur-Lovington-Atwood-Hammond celebrates after winning the 10-meter Hurdles on Saturday at the Class 1A girls state track and field state finals at Eastern Illinois University in Charleston. More photos at www.herald-review.com 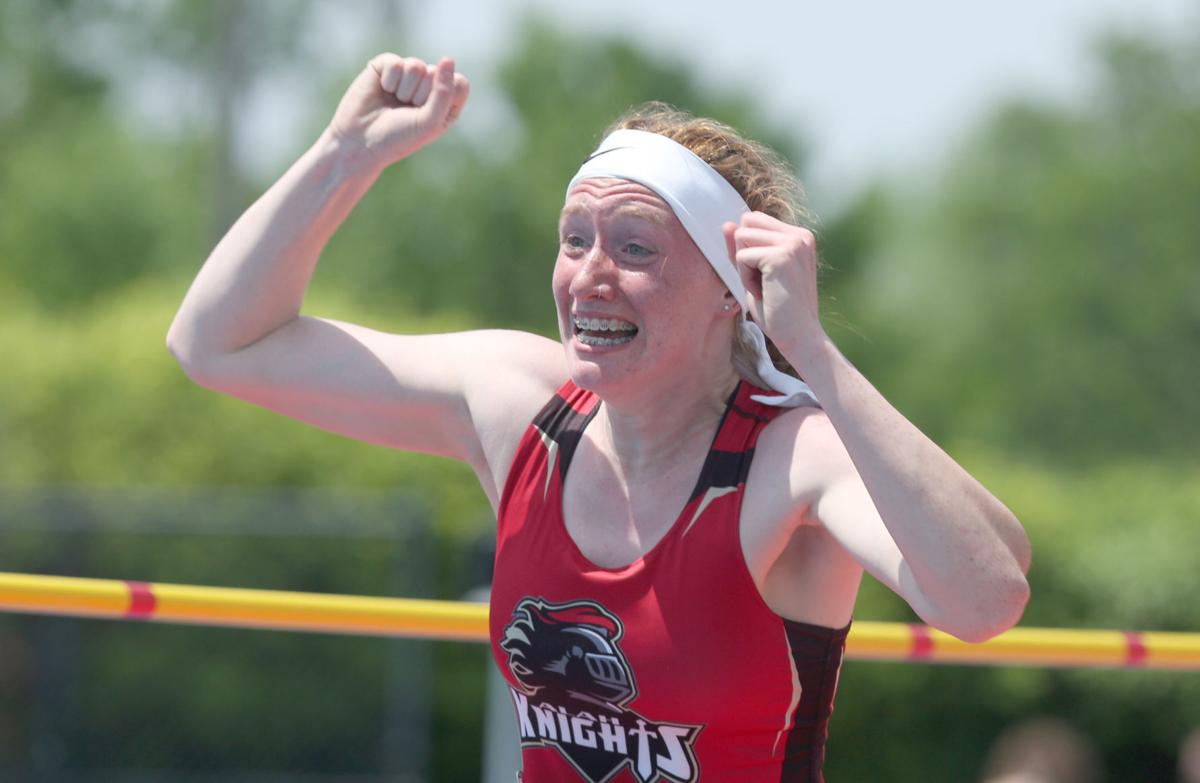 Kenli Nettles of Arthur-Lovington-Atwood-Hammond celebrates after winning the high jump on Saturday at the Class 1A girls state track and field state finals at Eastern Illinois University in Charleston. More photos at www.herald-review.com

CHARLESTON — All that was left was one hurdle. One intermediate barrier and a brief foot race that stood between Kenli Nettles and her third gold medal of the day.

Her front foot kicked the hurdle right down, but it was a small detour on her path to gold. She knew she had to go, so she hammered the final 10 meters and burst through the finish line in first place.

Nettles, a junior from Arthur-Lovington-Atwood-Hammond, crossed the line in 43.68 seconds, just a hair ahead of St. Teresa senior DaeLin Switzer, to win gold at the Class 1A girls state track and field meet at O'Brien Field in Charleston on Saturday. A smile overtook her face and she rested both hands on her hips. Not but a few seconds went by before she put both arms up and pointed to the sky.

She was pointing at her late grandmother, Rosie Nettles, who died in 2015 after a battle with lung cancer. Kenli was pointing to celebrate a day that ended with three first-place finishes: the high jump, 100-meter hurdles and 300-meter hurdles. She also finished fifth in the 200-meter dash.

“She was always at every single one of my track meets, so I’m really just doing this for her," Nettles said.

They were the first three golds of her high school career to send her medal count to 11 total, the most in ALAH history or any school that makes up the co-op. She'll place them in a display box that her brother made her in shop class, specifically designed to house her neck-ware.

“It’s amazing," she said. "That’s all I can say. I am so amazed with myself and the way I performed today."

The celebration after the 300 was almost muffled. The clipped hurdle appeared to leave the window open just enough for Switzer to turn on the jets and grab a gold to add to her already packed medal count.

“I was like, ‘You just have to go. You have to power through it,'" Nettles said. "I knew she was right there. She’s a great competitor and I love competing against her so that pushed me even harder."

In fact, the final push of the 300 was just part of a rollercoaster day for Nettles. The day started with the high jump, which turned into a waiting game. She was almost eliminated at the 5 feet, 6 inches bar. Nettles missed her first two attempts at 5-6 and cleared on her third try that would have otherwise eliminated her and gave the championship to Kiah O'Neal of Rock Island Alleman.

When the bar went up to 5-7 to determine a winner, Nettles knew she was in a good spot. She had cleared that height before, and she could do it again. On her first attempt she leaned back, got her steps and hopped over without so much as clipping the bar. She popped off the mat, threw two fist pumps and ran over to celebrate with her competitor, and close friend, NaKaya Hughes of Champaign St. Thomas More.

This was the jump that @kenli_nettles17 cleared at 5-7 to win the Class 1A high jump championship. pic.twitter.com/08CS12WOq3

O'Neal, though, cleared on her final try at 5-7, but neither competitor cleared the bar at 5-8. Nettles had fewer misses, giving her the day's first gold.

"Today was definitely a rollercoaster with high jump, but I’m so glad it’s over with and I can say I’m the 1A state champion," she said.

Her next gold came in the 100 hurdles. She was the top overall seed after turning in a blistering 14.23 in Thursday's preliminary round.

The second Nettles' right foot hit the finish line on Saturday to clinch a win with a time of 14.29 seconds, she extended both arms in the air and clasped her hands together in celebration. Immediately she followed with a fist pump to put the icing on the moment.

She had a good feeling from the start. Usually, her starts had been slow this season. This was different. She broke out of the box and knew she was in good position. In fact, she knew she had her second gold locked up before she crossed.

“With two hurdles left I was like ‘I think I’m going to win.’ I was super excited about that," she said.

Nettles' day started off at 6 a.m., an hour-and-a-half before her alarm was slated to go off. She couldn't sleep. She was ready to get to the stadium and make a wave in the class.

Exactly nine-and-a-half hours later, she stood at the south part of the blue track at O'Brien field as a state champion.

Of course she had to point up at her grandmother. She was too excited not to.

“Oh my gosh. She would be in tears," Nettles said. "She would be so excited. I just wouldn’t be able to think of what she would be thinking right now."

MONTICELLO — She was never an understudy. Instead, Monticello's Landis Brandon has spent the last two years as the best actor in a supporting role.

SHELBYVILLE — Thirty-two years ago when Kevin Kramer pulled up for his interview at Shelbyville High School, he was welcomed by a cinder track…

RANTOUL — The Mount Zion offense flexed its muscles to open postseason play, with Dayna Kennedy picking up where she left off after last year'…

AREA GIRLS TRACK ATHLETE OF THE YEAR: ALAH's Kenli Nettles moved up to the top step as a junior

ARTHUR — The three silver medals Kenli Nettles won as a sophomore were great. But as soon as her junior year at Arthur-Lovington-Atwood-Hammon…

MACON COUNTY GIRLS TRACK ATHLETE OF THE YEAR: St. Teresa's DaeLin Switzer is ready for her next chapter

Kenli Nettles of Arthur-Lovington-Atwood-Hammond celebrates after winning the 10-meter Hurdles on Saturday at the Class 1A girls state track and field state finals at Eastern Illinois University in Charleston. More photos at www.herald-review.com

Kenli Nettles of Arthur-Lovington-Atwood-Hammond celebrates after winning the high jump on Saturday at the Class 1A girls state track and field state finals at Eastern Illinois University in Charleston. More photos at www.herald-review.com