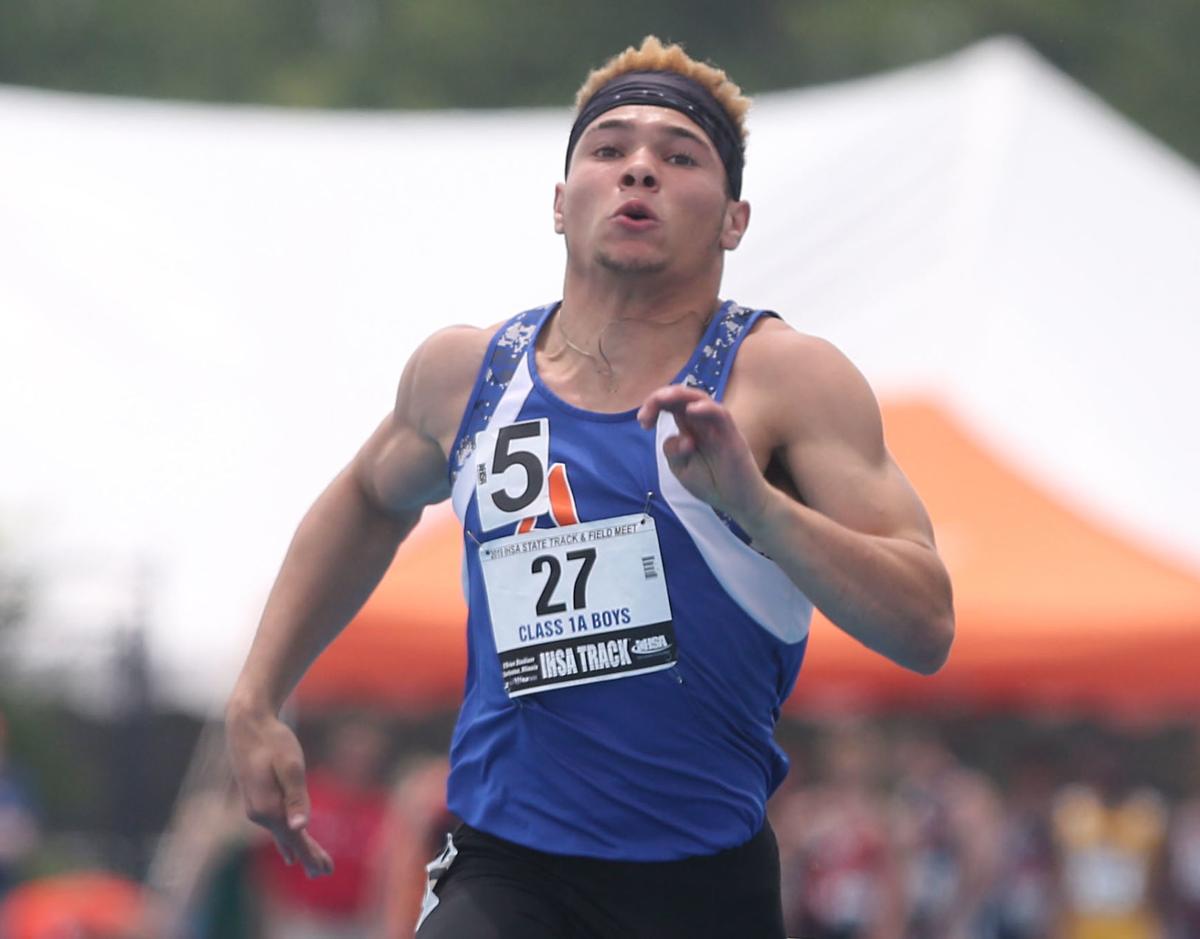 Argenta-Oreana's Makail Stanley, left, runs during the 100-meter dash on Thursday at the Class 1A boys state track and field preliminary meet at Eastern Illinois University in Charleston. More photos at www.herald-review.com 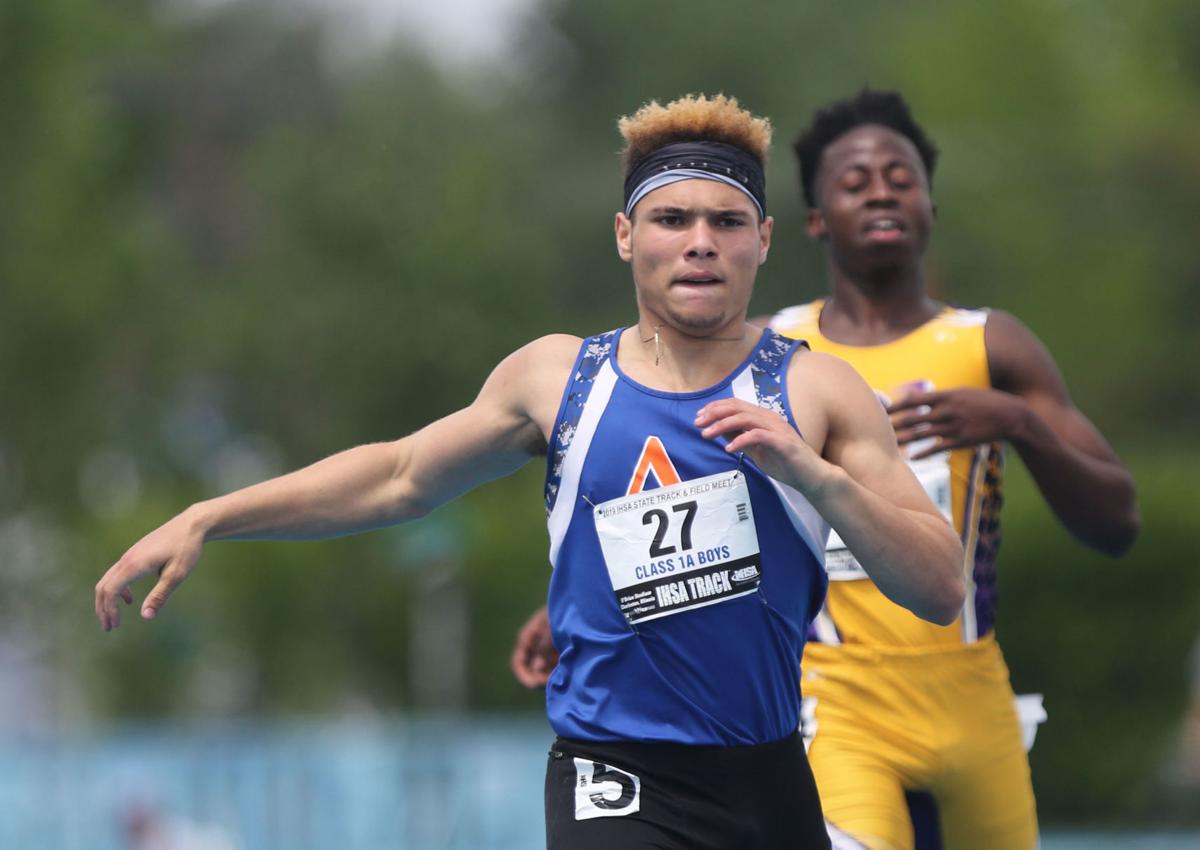 Argenta-Oreana's Makail Stanley runs during the 200-meter dash on Thursday at the Class 1A boys state track and field preliminary meet at Eastern Illinois University in Charleston. More photos at www.herald-review.com 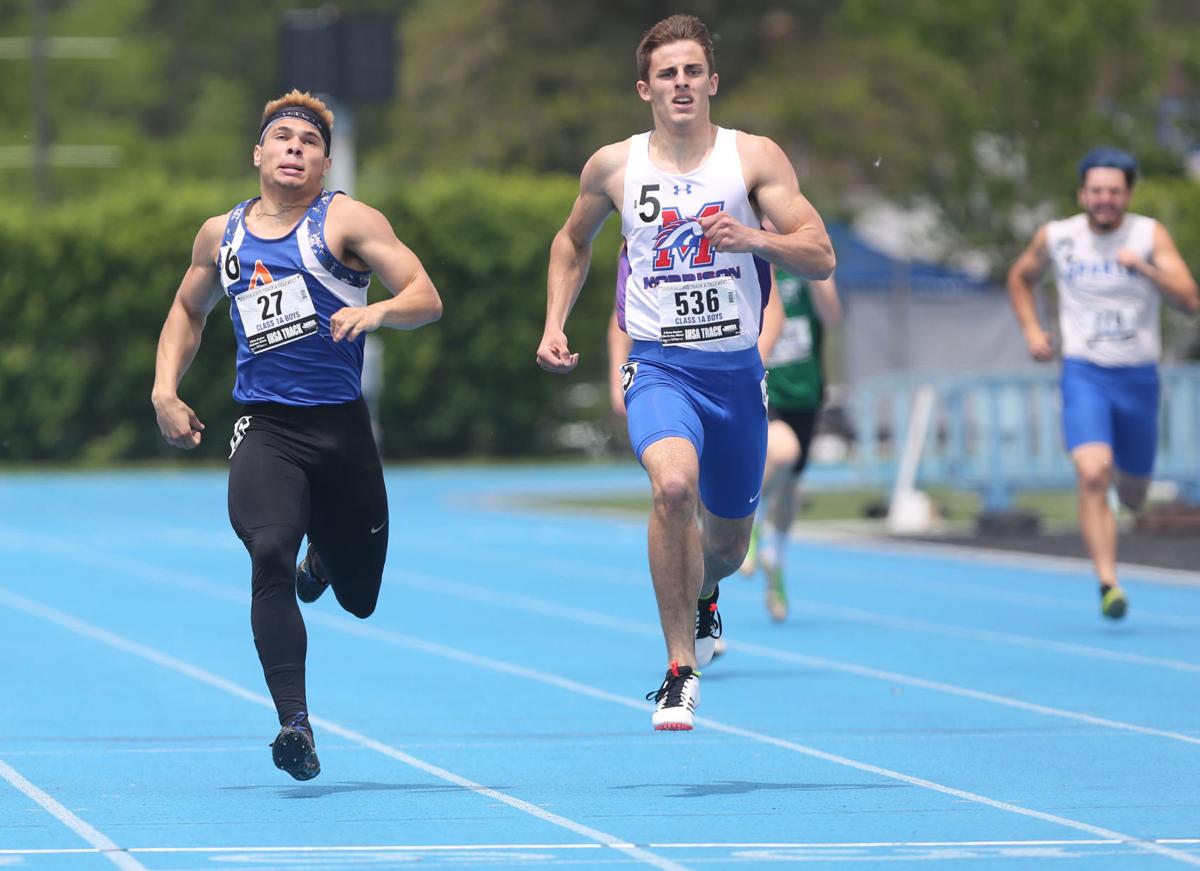 Argenta-Oreana's Makail Stanley, left, runs during the 400-Meter Dash on Thursday at the Class 1A boys state track and field preliminary meet at Eastern Illinois University in Charleston. More photos at www.herald-review.com

CHARLESTON — Just outside of the gate to enter O'Brien Field, Makail Stanley sat, gasping for air and basking in the moment of a first-place finish in his 200-meter dash heat.

A college coach walked over and talked to Stanley, a junior at Argenta-Oreana, to procure his contact information. The coach was interested in learning more and the blur that just tore up the blue track on Thursday at the preliminary round of the Class 1A boys state track and field meet.

Stanley obliged, jotting his information down on a yellow notepad. Argenta track and football coach Steve Kirk walked over and extended his hand to Stanley, who had his black compression pants rolled up to his knee. The two meet in the middle for a high five.

"We did it," Stanley told him.

Have a day, Makail Stanley. Wins his 200 heat with 22.69. He's going to Saturday in three events. @AOHSBOMBERS pic.twitter.com/rJf970CSta

But last season is exactly where it all starts for Stanley. He's proud of his accomplishments, but the shortcomings rattle around in his head. He just missed the finals in the 100 last year and was .17 off of a state championship in the 400. Of course, he remembers.

“Every practice. Every rep," he said of how frequently his mind wanders to 12 months ago in Charleston. "If you ask Coach Kirk, my mentality from last year compared to this year has changed tremendously. That kind of hurt me. I felt like I gave my best. When I look back at it, I was proud of my accomplishment, but I could have done better. That could have been mine. Things could have changed if I wouldn’t have been so lazy."

Those practices are more than the times Kirk sets up for the team. Stanley spends his mornings as a student at Argenta and goes to Heartland Technical Academy in the afternoon. That's when his self-imposed practice starts, at 2:20 p.m. at the track at Argenta. At 3:15, he goes in and does attendance with the team and back out he goes.

The workouts he does before practice begins as a team are intense. He does 50 block starts. If he wants to work on top speed he does runs 40s or 100s. Endurance workouts range from 350-meter runs to 450-meter runs. If he wants a good workout, he'll run his usual events. He always goes full bore on the mile.

.@AOHSBOMBERS with a 48.76 in the 400. That's going to get him to Saturday, despite finishing second. pic.twitter.com/zfXrJYcNT4

It's fueled by motivation and getting better.

“I think when somebody beats him, he uses that as fuel to make sure that doesn’t happen again, which I think is a plus," Kirk said.

Stanley is a rare breed. He doesn't need outside factors to push him. He's got internal push. It's hardly common, and Kirk hasn't seen much of it.

“I think he's a rare breed," Kirk said. "There are a handful in my career, maybe less. Maybe two or three who are able to self motivate without much outside influence. He’s one of those kids."

It didn't take long for Stanley to turn his thought process to a philosophical, big picture look at where he's at. He wants a team trophy, one he would have to earn by himself. At most, he can rack up 30 points for the Bombers. He doesn't want the trophy to say he did it. That's not important to him. He wants it for the teammates who push him everyday at practice. No, most of them don't have the speed or skill to end up at the state meet. Stanley was the lone representative from the school to land in Charleston.

Even still, he has kids who look up to him. He's been on every varsity sport since football camp broke late last summer. The Bombers went to the Class 1A semifinals and he went to state as a wrestler.

Those are great, he cherishes them. But he wants more for himself and for the team.

“The world is a big thing," Stanley said. "In the spec of the universe, we’re just ants, really. What I do now may or may not affect the outcome of what happens in my life or others. But if I can make a positive impact in anyone’s life, that’s the way I want to be remembered, rather than, ‘Hey was all-state track or all-state football or an all-state wrestler.’

"Those are all superficial things. They’re great memories, but in the end if you hurt the people you care about in the process, it means nothing."

Friday: Class 2A and 3A preliminaries

CHARLESTON — Micha Reed didn’t even need to hear the conclusion of the question. He knew the answer.

DECATUR — The Illinois Thundercats, an 8-man football team based in Decatur, will play for the Mid-America 8-Man Football League championship …

Argenta-Oreana's Makail Stanley, left, runs during the 100-meter dash on Thursday at the Class 1A boys state track and field preliminary meet at Eastern Illinois University in Charleston. More photos at www.herald-review.com

Argenta-Oreana's Makail Stanley runs during the 200-meter dash on Thursday at the Class 1A boys state track and field preliminary meet at Eastern Illinois University in Charleston. More photos at www.herald-review.com

Argenta-Oreana's Makail Stanley, left, runs during the 400-Meter Dash on Thursday at the Class 1A boys state track and field preliminary meet at Eastern Illinois University in Charleston. More photos at www.herald-review.com