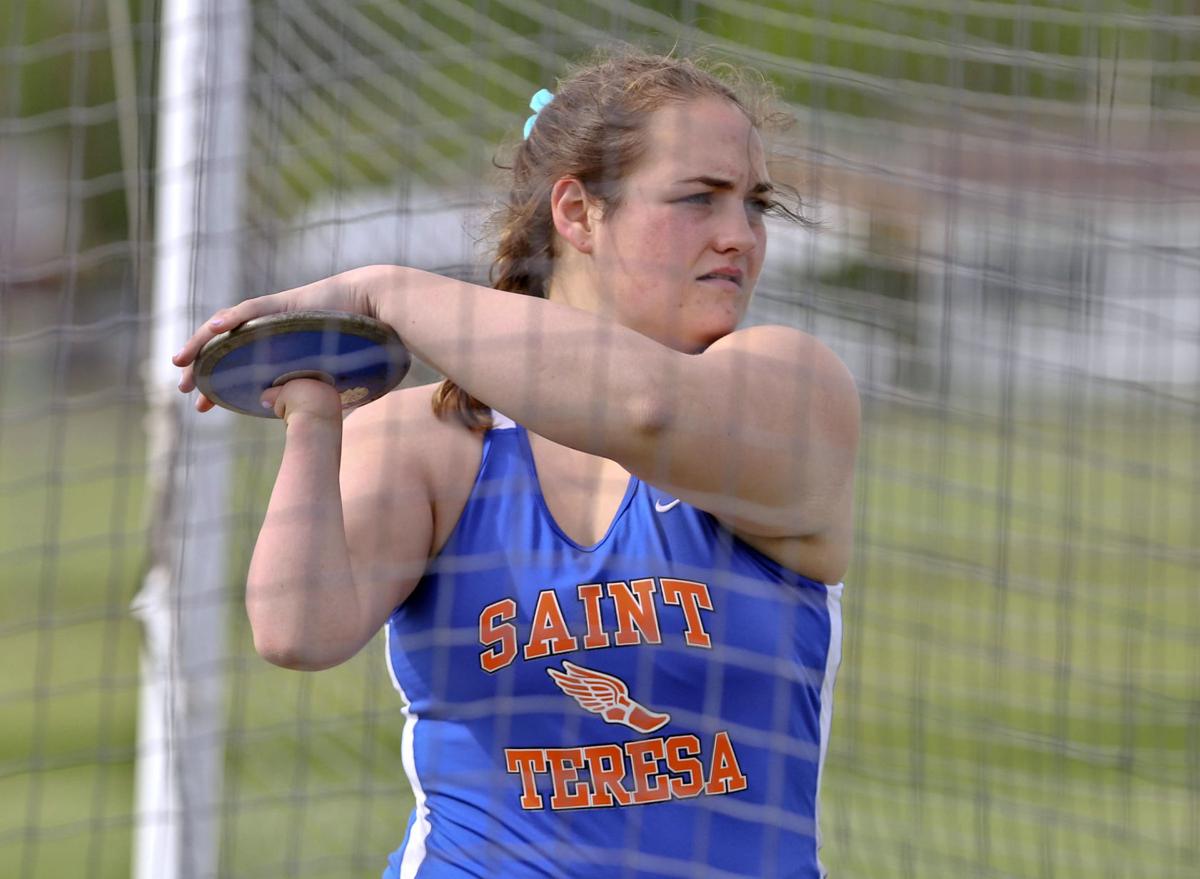 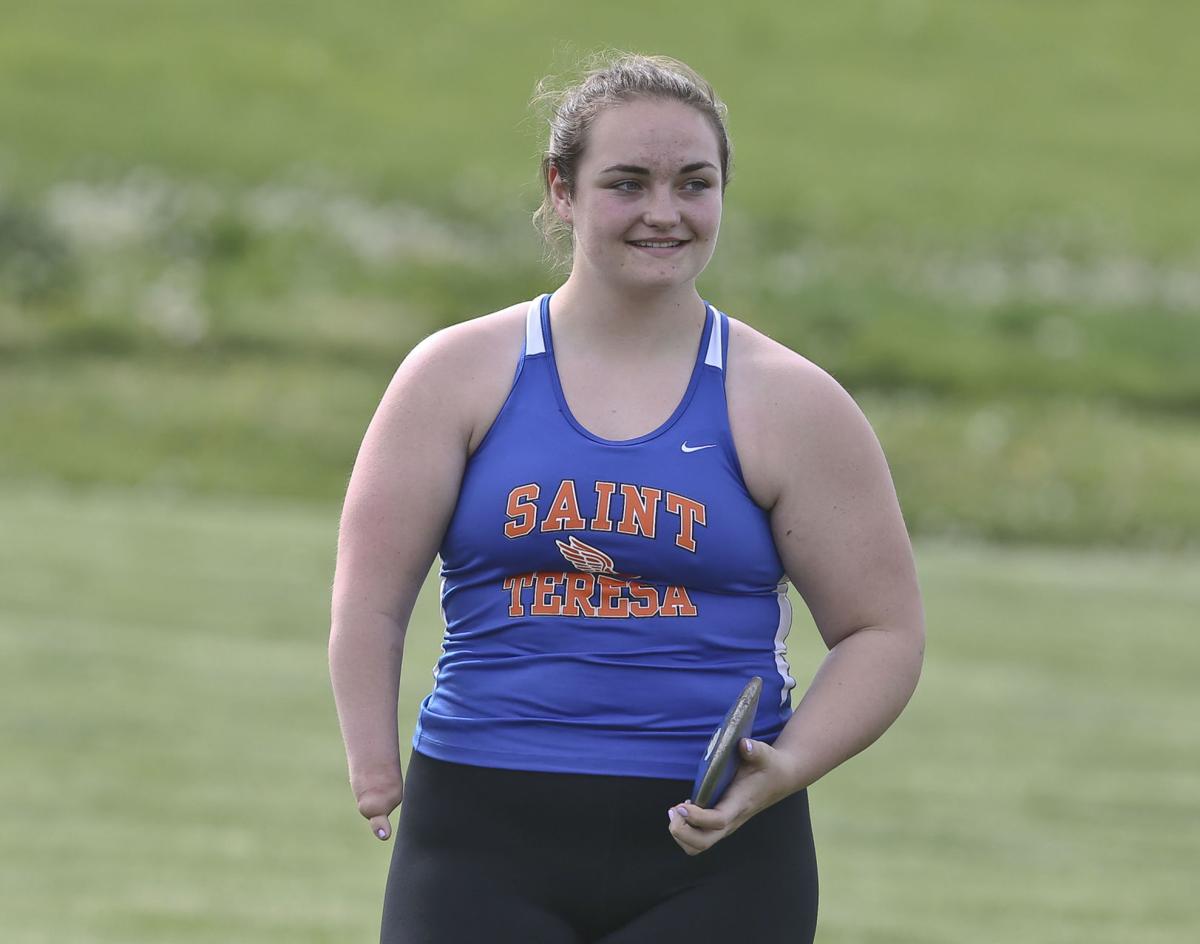 DECATUR — Sara DeJaynes remembers the first time her daughter Noelle told her that she was interested in throwing the shot put.

"She was in the midst of club volleyball at the time and she said 'I think I'm going to throw for the track team.' I was like ' ... All right, let's do it.' I always let her do what she wanted to try and so at the time I had no idea it would catch like wildfire," she said.

Noelle, who throws the discus and shot put for St. Teresa, finished 11th in both events at the Class 1A state track and field meet last spring. On Monday, she signed her National Letter of Intent to continue her throwing career on DePaul University's track and field team.

"This is only something a parent dreams about because when she was born I didn't think, 'Hmm, Division I athlete,' especially in track and field? It has been quite a journey and she is an amazing kid," Sara DeJaynes said.

DeJaynes hurls the discus and shot put with her left hand while having limited use of her right hand. Her improved distances since her freshman year have wowed St. Teresa track and field coach Todd Vohland.

"Coming from a sub-30 foot shot-putter her freshman year to where she is now, and she was an 80-90 foot discus thrower at best her freshman year. The improvement has been incredible and with the work she has put in, you can't be anything but impressed," he said. "Noelle is an incredible story with what she has been able to overcome and to excel is amazing."

College scholarships were also a long way from Noelle's mind when joining the track team.

"I was just so nervous to be around the upperclassmen and especially to be throwing when there weren't a ton of other throwers," she said. "So at first it was something I liked to do then I really started to enjoy it. I started the off-season training and you start getting really serious about it, and then you think: This might actually happen. I might actually go to college for this."

When thinking about a college choice, DeJaynes balanced her academic interests with a strong track program and DePaul University rose to the top.

"I was looking at Chicago because that is where I want to go for my major and Chicago is a great city. I'm majoring in journalism so I figured Chicago would be a perfect place to go for college," she said. "As I was looking at the different programs for throwing, DePaul looked like the best fit for me. They have a big group of throwers and I talked to the coach and we had this great connection, and that's what sold me."

DeJaynes puts her writing skills to good use on the Bulldogs' yearbook.

"I've always liked writing and we have a yearbook and this year I'm the yearbook editor. That's what really got me interested in (writing) and it made me realize I could do this for a living," she said.

The recruiting process was a hectic one but DeJaynes said she's happy with how it turned out.

"Signing to a college is something I have been looking forward to since I started doing track and for it to be my No. 1 choice makes it even better," she said. "The support of my family and friends means everything. Ever since I was younger, doing any sport I've always gotten all this support, but when I got into high school and got serious about this, it has been my whole family. It is all my friends who are so supportive, and it feels so good to have this support system around me that I can talk to about all this stuff and they are always so excited."

Although her college decision is over, DeJaynes still has her senior spring track season ahead of her and she is looking to improve her distances from last year (36-09.5 in shot put and 118-01 in discus).

"I really just want to keep getting better. I'm really hoping that if everyone does how we are supposed to do that we could get first at state," she said. "So obviously I have my individual goals but that team goal is huge. I'm hoping to come out of the state meet with three medals — discus, shot put and as a team. It's going to be great."

DECATUR — If she puts her mind to it, St. Teresa's DaeLin Switzer can do it.

CHARLESTON — DaeLin Switzer is a two-time state champion in the high jump, but going into her junior year at the Class 1A girls state track me…

ASSUMPTION — As Payne Turney walked away from the finish line after winning the 800-meter run, a judge asked if she had any more races.

St. Teresa's Noelle DeJaynes scratched on a couple of her throws during the Class 1A Shelbyville Sectional discus preliminaries.

BLOOMINGTON — There was hardly any time for Kenli Nettles to be overcome by nerves.

MACON — In a span of about five minutes, Chloe Moyer had back-to-back photo finishes.