CHARLESTON — At the end of the 200 meter dash at the Class 2A Boys State Track and Field Meet in Charleston, Maroa-Forsyth's Ben Gilbert went airborne.

"In the 100, I started out strong and at the end, I kind of died. In the 200, I wanted to make sure I finished strong, so I dove because I wanted to do everything I can at the end," he said. "I was concerned about it because it is the same guys in the 100 and the 200. I told myself that I had to finish hard no matter what and give it all I can and that's why I dove."

Gilbert was fastest in the fourth heat of the 200-meter, which had most of the fastest runners from sectionals. But Gilbert's time of 22.45 ended up second to Tony Phillips from Kankakee McNamara, who had a faster time at 22.31 in the third heat, giving Gilbert the silver.

"That kind of sucks," Gilbert said. "When you look back at it, you think that you could have run .01 seconds faster, but you can't go back."

In Gilbert's three-medal performance, his top run was in the 200 after a full day of competition.

"It's hot out, so I felt sort of dehydrated. I went back to our bus after the 4x200 and sat in the air conditioning, so that helped a little," he said. "When you are standing out here before the race, it takes your energy, but you just have to push through it. The 200 meters was my best race. I'm good at running the curve, so that's my strength."

Gilbert was the Trojans' top receiving weapon in football with 549 yards receiving on 34 catches and eight touchdowns last season and he plans to play football at St. Ambrose University next fall. With his sprinting success, the Fighting Bees may look to him for track as well.

"I'm thinking about track and they have contacted me. They had seen my times on Twitter and so I'm thinking about it, but football and track is a lot for college," Gilbert said. "I won my heat today and it could be my last race ever, so it is nice to be able to look back and know that I won."

Joining the Trojan runners in medaling were brothers Charlie and Rob Gentle, who finished third and eighth in the pole vault, respectively. Charlie Gentle, a freshman, cleared 4.22 meters and Rob Gentle, a junior, cleared 3.94 meters. The Trojans as a team finished sixth overall with 32 points.

Arthur-Lovington-Atwood-Hammond's Kaden Feagin's first long jump attempt on Thursday was his best jump of the season. The sophomore multi-sport standout, jumped 6.62 meters, good for the silver medal on Thursday.

Feagin had been hampered with an ankle injury that kept him from competing in the 100, 200 and 4x200 meter relay this season.

"I really wasn't expecting to jump that far. I've been out with an ankle injury so today I was just seeing how far I could jump and at least try to get top nine. I'm proud of the result," he said. "When I jumped, it really didn't feel that great but I guess it was."

Feagin helped the Knight win the sectional team title last week by competing in the shot put and finishing third with a throw of 44-3. He accomplished that with very little training and may add it to his event repertoire when track comes around again next year.

"I had about five days to train and it was pretty fun doing a new event. I was surprised that I got third and I didn't know I could throw that far," he said. "I have to work on my stance because I was just doing the power stance and throwing it."

Feagin's teammate Layton Hall took home a silver medal in the 3,200 race and a seventh-place medal in the 1,600.

"At the beginning of the (3,200) race I felt really comfortable and really relaxed. I'm pretty pleased with the day for the most part. I wanted to go for the win but I'm pretty pleased with today," Hall said following the 3,200. "My focus was on the 3,200 today and for the 1,600, it is whatever I have left in the tank. I'm going to hang out with the big dogs and see what I can do."

Hall stayed with the front pack at first in the 1,600 but the long day of racing impacted his finish.

"I definitely felt the two-mile race in my legs and there were a lot of guys fresher than me but I tried stick my nose up there and hand on as best I could," Hall said.

Hall, who was also an all-state cross country runner, wrapped up his high school career on Thursday and will race at Indiana State next season.

"It is definitely bittersweet. I am ready to go to Terre Haute and run for Indiana State," Hall said. "I'm very excited. It will be a different atmosphere than running at Arthur and I'll get to have some guys to compete with everyday. I'll have those guys all year round and I'll make some friends along the way."

Also medaling for the Knights, Max Allen finished fourth in the 100 meter dash and the 4x200 relay team (Brady Borntreger, Aaron Likens, Allen and Finnian Davison) finished fifth. The Knights as a team finished in seventh place with a team score of 29.

Meridian's Drew Hurelbrink is a standout football and basketball player but high jump is the sport that has his heart. He got into the sport in sixth grade, following his older brother Connor Hurelbrink's steps in the sport.

"I usually put high jump practice over a lot of things. It is my favorite thing to do, to high jump. I love it," Hurelbrink said. "I'll go out and jump whenever I feel like it but if I have school practice I'll put that over it for sure."

Entering Thursday's 1A state track meet, Hurelbrink was the No. 1 seeded jumper, clearing 6-8 at sectionals. But something wasn't feeling quite right for the junior's first trip to the state meet, as he finished in third place with his high jump being 6-5.

"It was one of my worst meets and I wasn't jumping very well. I think I was in my head today," Hurelbrink said. "(The last height) was 6-6.25 and I have cleared 6-6 the last four meets in a row. I guess I just wasn't on today."

Still, the improvement Hurelbrink has shown has surpassed his expectations for the season and gives him some motivation for his senior season.

"I have been really happy with this year and my goal was to top 6-5 and get a top five here. I'm (in third) right now and got 6-8 in my last meet. That's tied for second for our school record, so I am happy with my season," he said. "I think (my improvement this year) was getting stronger and my confidence helped a lot. My steps felt great this year and I felt like I was at the top of my game when I came here but it is alright. It motivates me for next year."

Check out photos from Thursday's Class 1A portion of the IHSA Girls State Track & Field Meet in Charleston.

The Knights junior has eight top-5 finishes this season.

Monticello runner Mabry Bruhn was regional champion and the Sages won the team competition on Saturday.

Monticello's Mabry Bruhn and ALAH's Logan Beckmier were regional champions on Saturday. Mattoon's Brock Davee was a 2A regional champ.

Arthur-Lovington-Atwood-Hammond runner Logan Beckmier was regional champion and the Knights won the team competition on Saturday.

Watch now: St. Teresa runners Caleb Kernaghan and Martin Velchek will push each other at sectionals

The Bulldogs boys and girls will compete at Saturday's Class 1A St. Teresa Sectional at Hickory Point Golf Club in Decatur.

Joining the Knights in advancing as a team to next week's Class 1A state meet was St. Teresa, Monticello and Shelbyville. 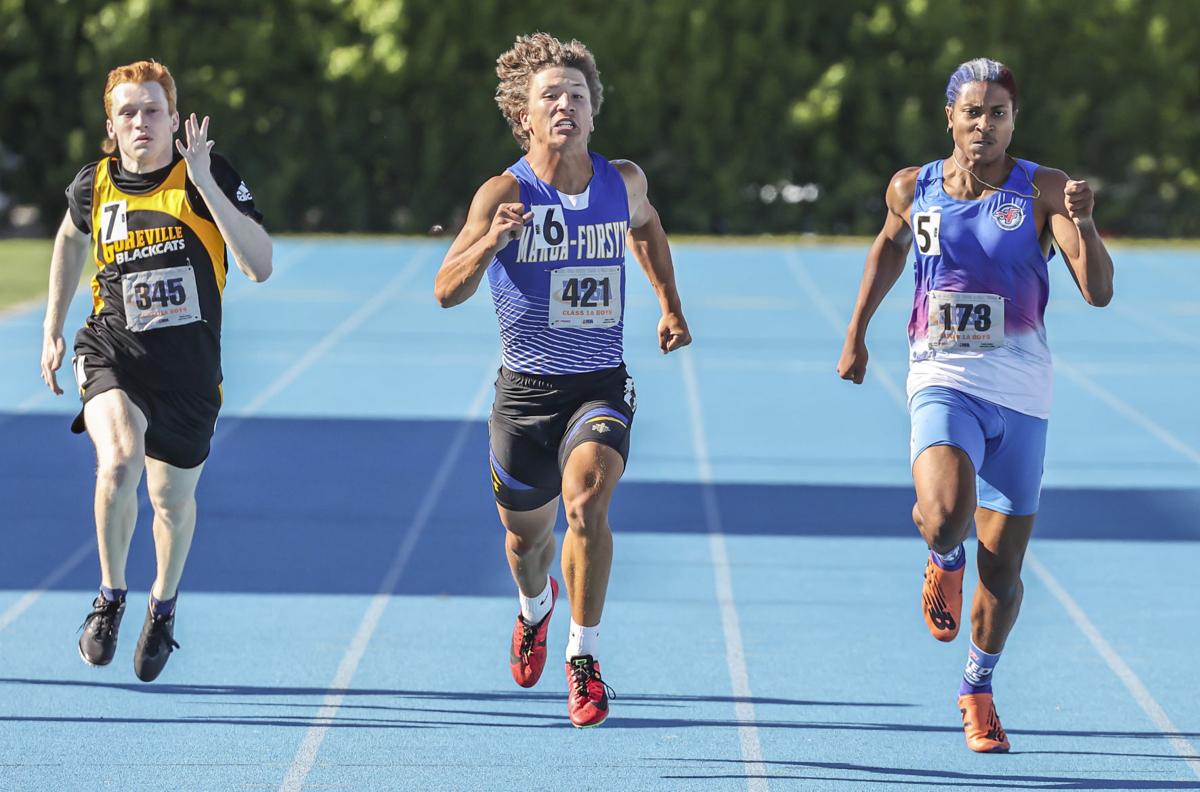 Ben Gilbert, Sr. Maroa-Forsyth, center, runs the 200m on Thursday during 1A Boys State Track and Field in Charleston on the campus of Eastern Illinois University. Visit www.herald-review.com to see more photos and videos from the event. 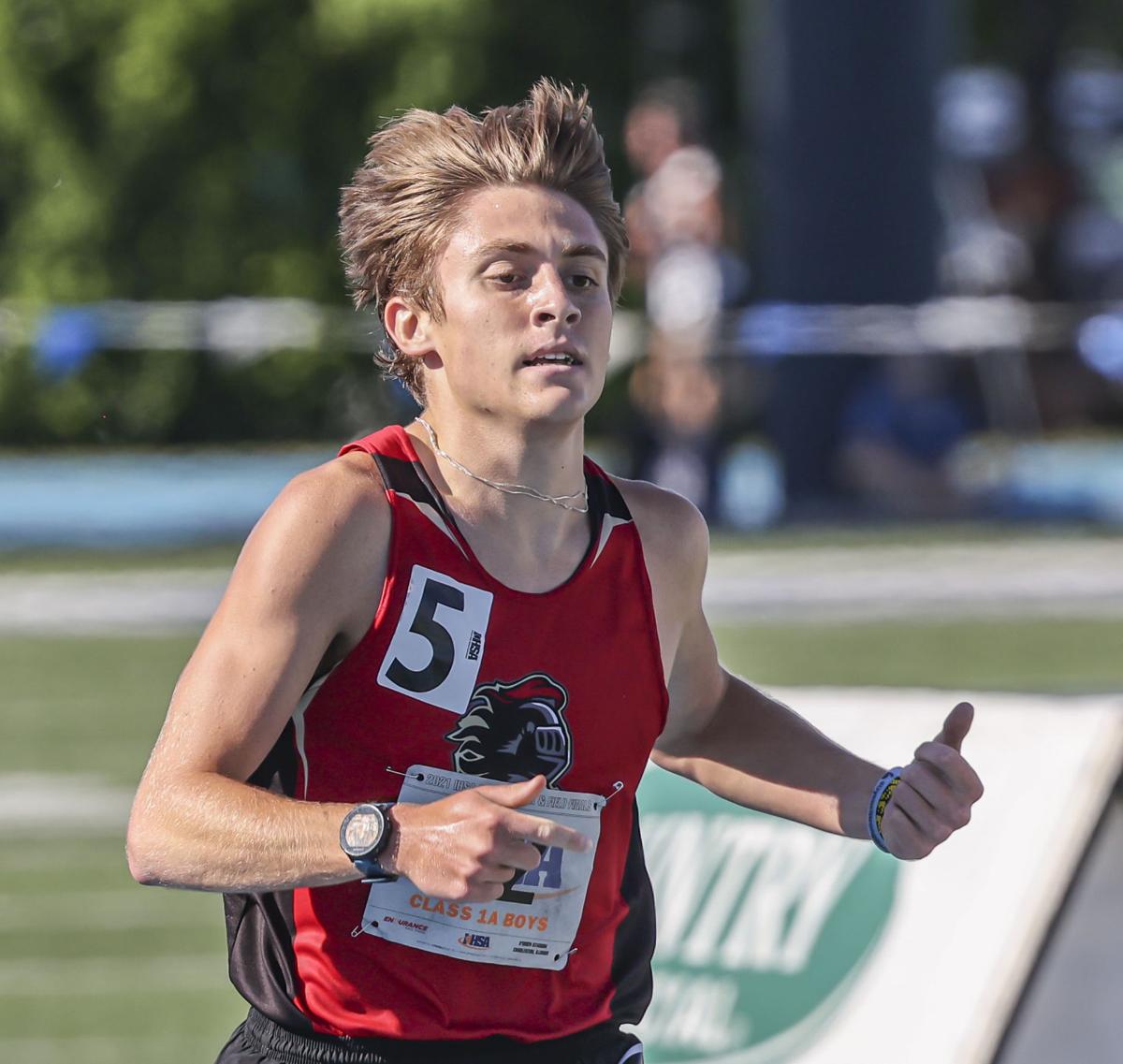 Arthur's Layton Hall runs during the 1600m run on Thursday during 1A Boys State Track and Field in Charleston on the campus of Eastern Illinois University. 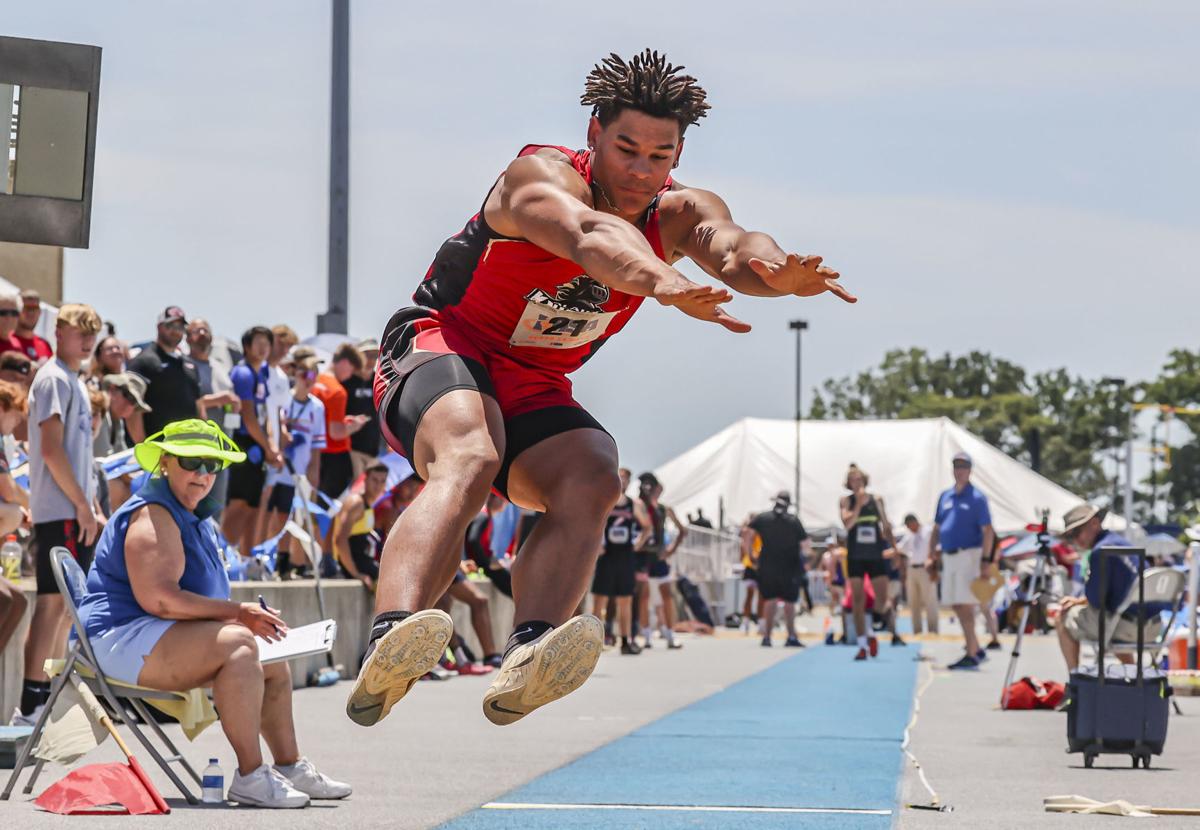 Arthur's Kaden Feagin leaps during long jump on Thursday during 1A Boys State Track and Field in Charleston on the campus of Eastern Illinois University. 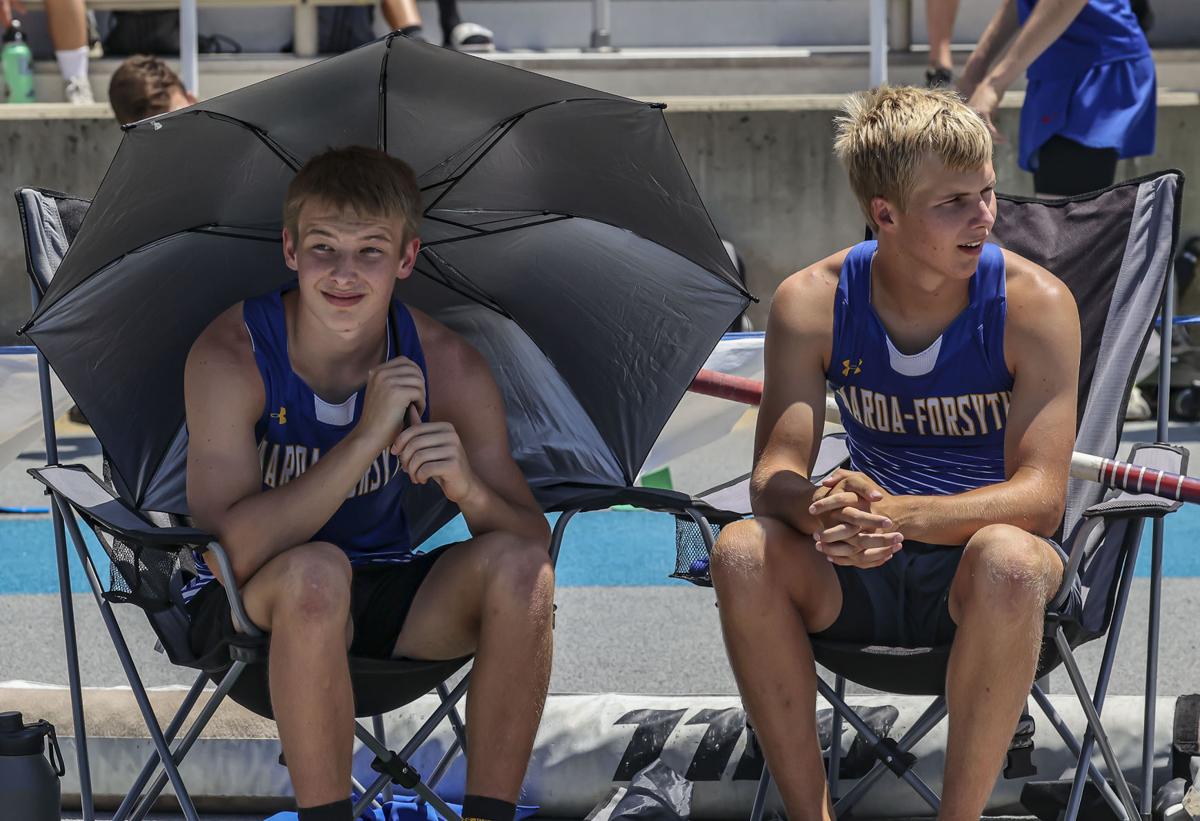 Charlie and Rob Gentle rest during a break on Thursday during 1A Boys State Track and Field in Charleston on the campus of Eastern Illinois University. Visit www.herald-review.com to see more photos and videos from the event. 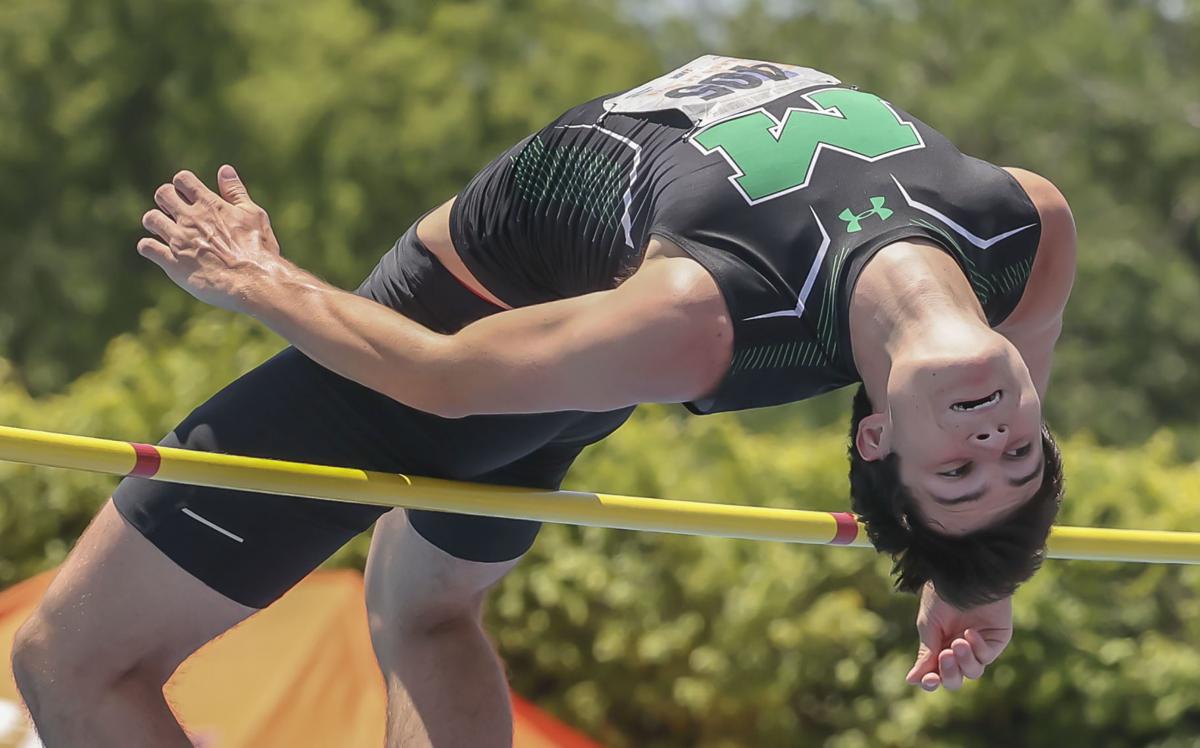 Meridian's Drew Hurelbrink during high jump on Thursday during 1A Boys State Track and Field in Charleston on the campus of Eastern Illinois University. Visit www.herald-review.com to see more photos and videos from the event.