CHARLESTON — Mount Zion's Christian Keyhea has had a busy week.

There was football weight lifting, track practice, football camps at the University of Illinois and North Central College, plus the Class 2A Boys State Track and Field Meet in Charleston on Friday.

Keyhea has been battling Tolono Unity's Kyle Burgoni all track season and Keyhea finished second to Burgoni at the sectional. Burgoni was triumphant again on Friday with a time of 10.72.

"I think I did pretty good. I was kind of surprised that I got second and I was pretty happy about it," Keyhea said. "(Kyle) is graduating and so next year I think will be my year. I raced him three times this season and he has beaten me all three, but I have improved every time I have raced him, so I am pretty happy about that."

Keyhea quickly returned to the track to anchor the Braves 4x200 relay team (Jacob Baten, Kemper Koslofski, Matthias Adams, Keyhea) to a seventh-place medal and the team's best time of the season at 1:30.90.

"We have three juniors and one sophomore, so we are bringing everybody back after placing seventh. We were the youngest group there so that was pretty awesome," Keyhea said. "We have improved in our handoffs and our times. I've improved my time and it has been a good track season. I'm glad we got to have one."

Mount Zion pole vaulters Kyle Hensley and Reid McNeil competed earlier in the day but with the running events pushed from 2 p.m. to 5 p.m. because of dangerously high temperatures, Keyhea and the runners were able to delay their trip to Charleston and stayed out of the heat.

"I do think the delay helped today. When I was outside earlier it was pretty hot and it got a little cloudy here (in the afternoon), so it wasn't as bad," Keyhea said. "I was able to wait to comedown so we were able to get more rest and I think that helped actually."

Mount Zion sophomore Sam Atkinson metaled in the 800 meters with a sixth-place finish and a time of 1:58.94. As a team, Mount Zion finished tied for 14th place with 20 team points.

In his final two high school long distance races, Taylorville's Chris Cherry gave it his all, pushing into the lead with 200 meters to go in the 3,200 meters, and ultimately finishing second with a time of 9:21.03.

Cherry entered the 3,200 seeded sixth from sectionals and although he would have a 1,600 race later in the hot and humid conditions where he was the No.1 seed, the Tornadoes senior left it all out on the track.

"I was going has hard as I could on both because I was trying to get the double (championship) but it is what it is," Cherry said.

Cherry ran with the lead group throughout and was in second at the 2,000 meter mark. He was passed and sitting in third as the final 400 meters began and with a burst of speed, he was leading entering the final two turns of the last lap.

"Drew is fast and I gave it my all and he was just the better man today," Cherry said. "I think I might have scared him a few times but he's a phenomenal runner and I love the competition. We can't get any faster if there isn't anyone faster than us. (In the 1,600), I came in and I felt like I was ready to die. But I'm excited to get out of here and start the next chapter in my running career."

Cherry will be moving on to run cross country and track for the University of Illinois-Springfield next year.

"I've never been more excited in my life. I have been working so hard and I had a little trouble finding a college for a while. UIS is my spot and its the real deal," Cherry said.

Cherry had a large contingent of fans making the trip from Taylorville and sporting his name across their chests.

Said Cherry: "They are a heck of a cheering section and they are my favorite part of every race." 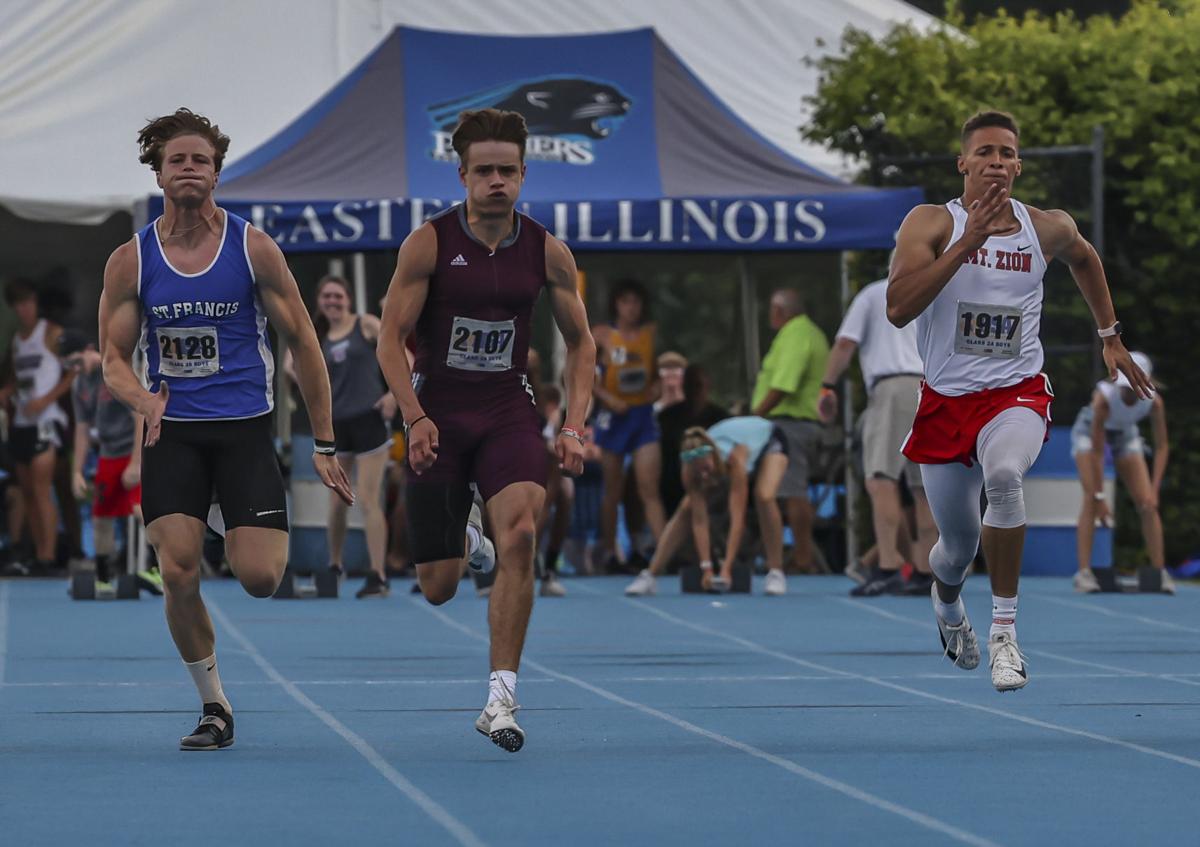 Mount Zion's Christian Keyhea, far right, runs in the 100m on Friday during 2A Boys State Track and Field in Charleston on the campus of Eastern Illinois University. Visit www.herald-review.com to see more photos and videos from the event. 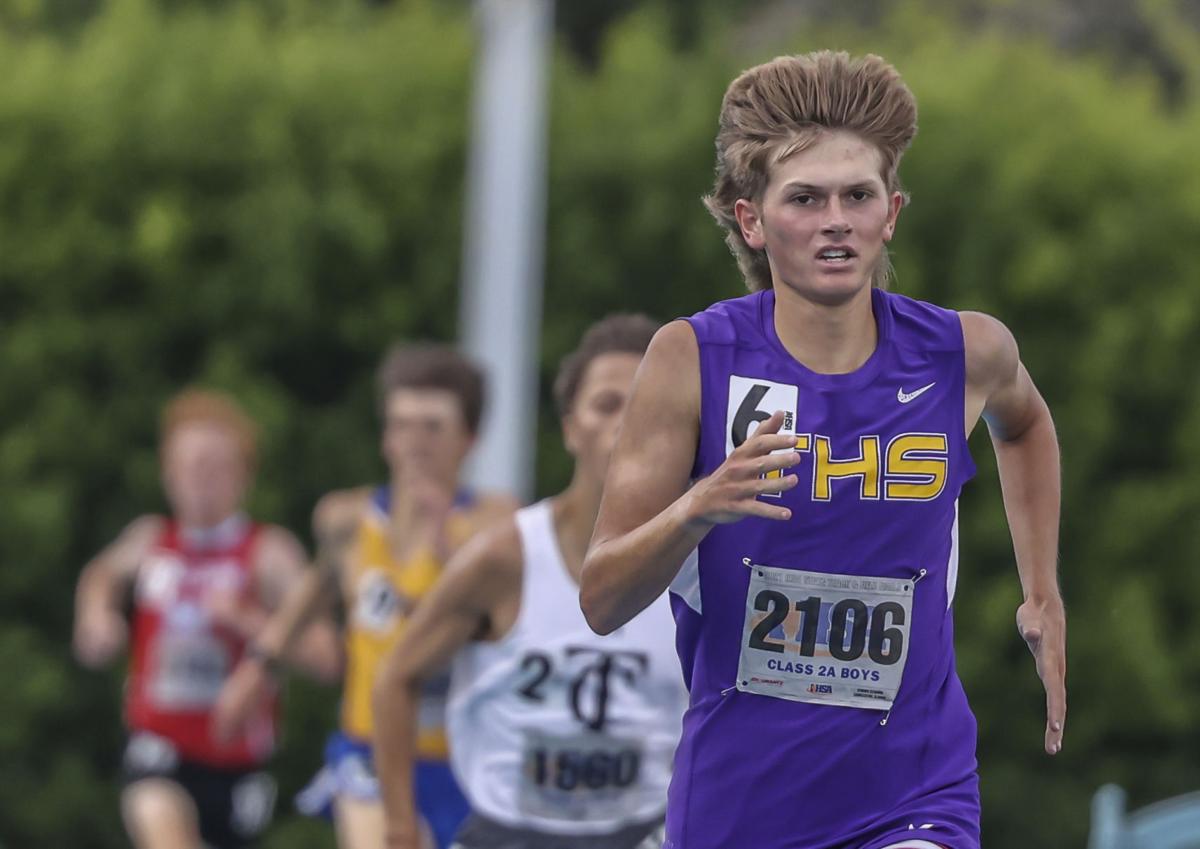 Taylorville's Chris Cherry competes in the 3200m on Friday during 2A Boys State Track and Field in Charleston on the campus of Eastern Illinois University. Visit www.herald-review.com to see more photos and videos from the event. 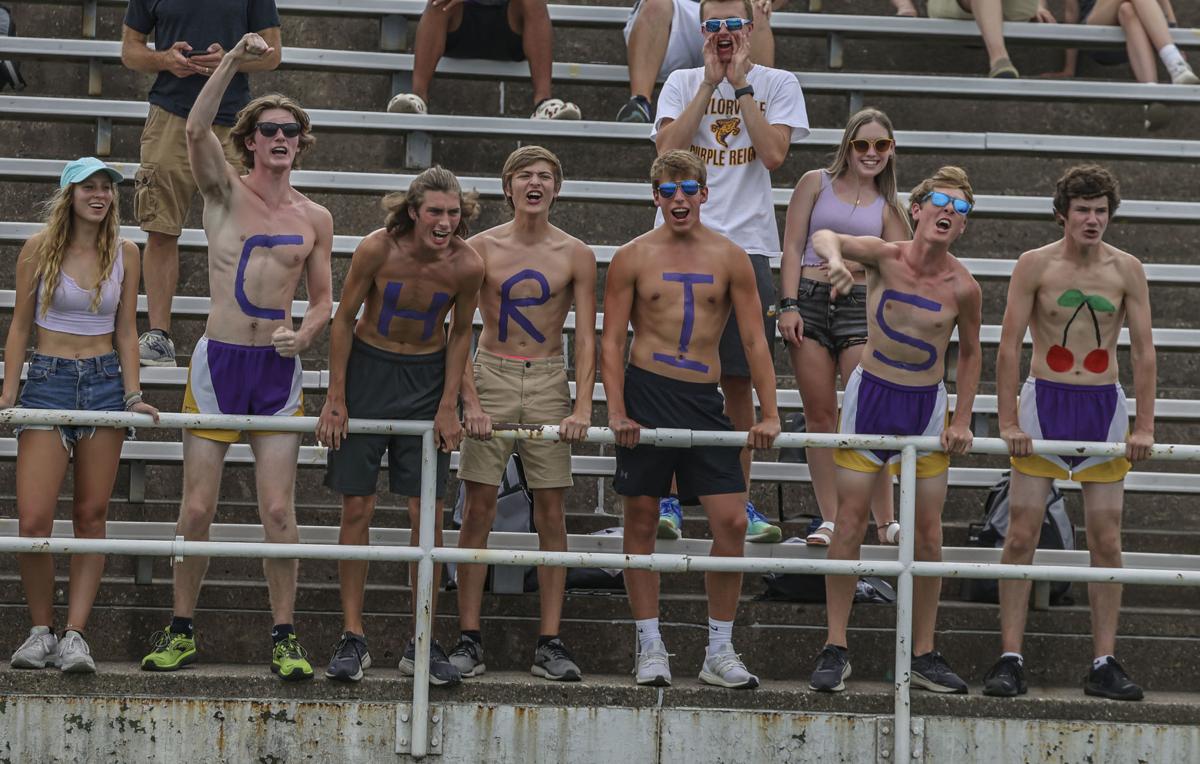 Taylorville fans cheer on Chris Cherry during the 3200m run on Thursday during 1A Boys State Track and Field in Charleston on the campus of Eastern Illinois University. Visit www.herald-review.com to see more photos and videos from the event.