The team held a volleyball retreat at the start of the season, and as the regular season approached its end, Brinkoetter gave the team's four senior players the opportunity to get a taste of coaching.

"This was the last week with the seniors and so I had them lead practice. They were the coaches and they started and ended the practice," Brinkoetter said. "I feel like a lot of them could be future coaches and they are always looking for coaches for the Rapid Fire Volleyball Club. They did a great job and we had a lot of fun running drills. They are a great group and I am going to miss them tremendously."

But Brinkoetter still hopes to have plenty of time left with this year's Rams, who start postseason play next week along with the rest of the teams in the state.

Senior outside hitter Mia Wade, middle hitter Mallory Holland, libero Carli Canada and defensive specialist Alivia Young put the Rams through their paces and got an idea of what Brinkoetter deals with each practice.

"It was a kind of chaotic but it was really fun. We got to see it from a coaching perspective," Wade said. "I think it was fun that we each got to split up and do our own drills with our own positions on the court."

For Holland, it was a chance to connect with the younger players that will take over her spot in the middle.

"It was super fun and it was hard to get all 26 players to listen to us. We got to break into our separate positions and work with all the middles," Holland said. "I'm the only senior middle so I wanted to work with those that are coming up behind me and share my knowledge and experience with them. Hopefully, they can step up next year and be big on the court at the middle."

Wade leads the team in kills (165) and digs (311) while Holland is the leading blocker with 49 this season. Canada has 308 digs in her first season at libero.

"Mia has always done a great job and she is one of the best passers that Shelbyville has ever had. She is a very good role model," Brinkoetter said. "Mallory in the front row is a beast when it comes to blocking. She can intimidate other players and she's very loud and gets the team in line."

The Rams started their season 10-1 but hit a stretch of challenging games in the middle of the season.

"We started off great and I feel like in every program in the middle you have a dip and we struggled a little bit," Brinkoetter said. "We were going three sets in every match and then lose really close. We should have won about half of those games."

The team (21-9) righted the ship and finished their regular season with a win against Meridian on Thursday to wrap up the Central Illinois Conference title. They play Mount Zion and Windsor/Stewardson-Strasburg on Saturday.

"(During the season's struggles), we talked about it after the games about what we need to fix and how we can fix it and progress from there," Wade said. "We come into practice the next day with new attitudes and everyone is fresh."

Powering the Rams offense is Brinkoetter's daughter, sophomore setter Jaycee Brinkoetter, who has 436 assists this season.

"She started as a freshman and was a little quiet. It's hard for a freshman to lead a varsity program but she was learning a lot," Meleah Brinkoetter said. "This year, you can tell a huge difference. You can tell she feels more confident out on the floor. She's way more consistent and doing a better job talking with the team."

Jaycee said she credits her club season with her improvement, along with extra time with her hitters after practice.

"Club definitely has helped me and (Rams assistant coach Lindsay Krumreich) was a setter and she has helped me improve a lot," she said. "It was getting my hands on the ball and staying after some practices. I feel like my hitters aren't afraid to tell me if I need to fix things and they are never rude about anything. We stay after practice and work on improving our communication with each other."

The No. 3-seeded Rams host their own Class 2A regional and begin play against No. 5 seed Vandalia in the regional semifinals on Tuesday, Oct. 25, at 7 p.m.

The Rams were last regional champions in 2019 and advanced to the regional finals last season.

"Since the beginning of the season, our goal is to get out name up on the (team titles) banner. It's been a few years and so that was our big goal," Meleah Brinkoetter said.

Wade was a part of the 2019 regional championship team and wants to continue to cross off items from her goals list.

"My biggest goal for the season was to get my 1,000th dig and I reached that last week. I think that was a really big accomplishment for me," Wade said. "Another big goal is a regional championship. My freshman year we got regional champion and I'm really hoping we get to do it again my senior year."

As conference play was winding down, the Rams were in the hunt for a CIC championship but needed some help, and got it.  Shelbyville beat Meridian on Thursday and Warrensburg-Latham defeated Sullivan, giving the Rams their first CIC title since 2017.

Holland said that gives Shelbyville even more confidence for the postseason.

"I think at the regional we have a pretty good draw," she said. "We have home court advantage, which is exciting."

Jaycee Brinkoetter wants to help win the team some more hardware for the outgoing seniors.

"They definitely deserve it and they are a really good group of players. They are hard-working and so I want to play my best for them," she said. "I feel like our chemistry is really good on and off the court. We had a rough patch in the season and I think we have stopped being in our head so much. We needed to stop thinking about what had already happened and we needed to forget about it and move on."

Live Week 9 score updates from throughout the Central Illinois area

Check out all of Friday night's finals here.

The Decatur area has 14 teams who have either made the playoffs or could still make it with a win on Friday.

Check out each nominee for player of the week and scroll to the bottom to make your vote. Voting will continue through Thursday at noon, with …

Illinois running back Chase Brown leads the nation in rushing. He's in the national spotlight after the Illini's first seven games.

Ousted quickly from playoffs, Cardinals face life after Molina without certain starters up the middle and payroll titans taking over the Natio…

Live Week 8 score updates from throughout the Central Illinois area

Check out all of Friday night's finals here.

Week 8 rewind: No. 1 St. Teresa football gets everyone involved in remaining perfect

All four Decatur-based football teams — MacArthur, Eisenhower, St. Teresa and LSA/Mount Pulaski — were victorious on Friday for the first time…

North Central had 776 yards of total offense while Millikin was held to 198 yards.

With a win the Railers (4-4) could make their first playoff appearance since 1984.

Check out the Central Illinois boys and girls cross country runners who will be in contention at Saturday's regionals.

Check out the local boys and girls cross country runners that advanced to sectionals on Saturday.

Decatur Lutheran School Association/Decatur Christian, ALAH, Shelbyville, Taylorville and Lincoln are among the schools still alive in the playoffs.

WSS moves on to face St. Thomas More in the 1A sectional finals on Wednesday.

The Hatchets advance to play St. Thomas More in the 1A sectional championship on Wednesday.

Volleyball playoffs: Despite small numbers, Decatur LSA volleyball had a season to remember

The Lions posted a 29-8 record and won the program's second regional title this season, their first in 15 years.

The Hatchets finish their season as regional and National Trail Conference champions with a 29-10 mark.

The Hatchets finish their season as regional and National Trail Conference champions with a 29-10 mark.

The Tornadoes face LaGrange Park Nazareth Academy on Friday at about 5:30 p.m. at Redbird Arena in Normal. 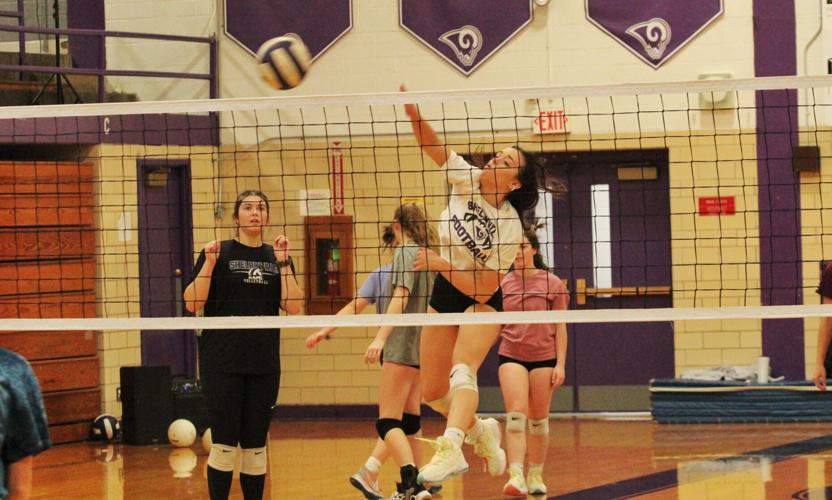 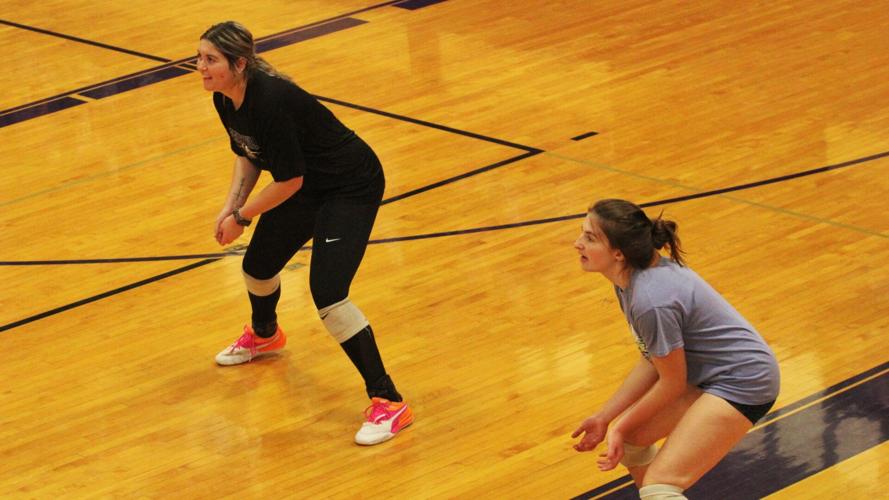 Shelbyville's Mallory Holland (left) and Jaycee Brinkoetter (right) wait for the ball at practice this week. 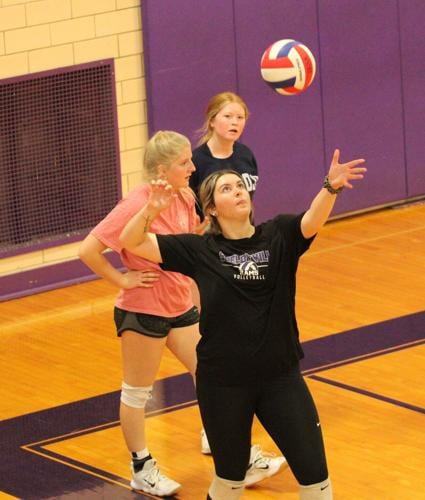 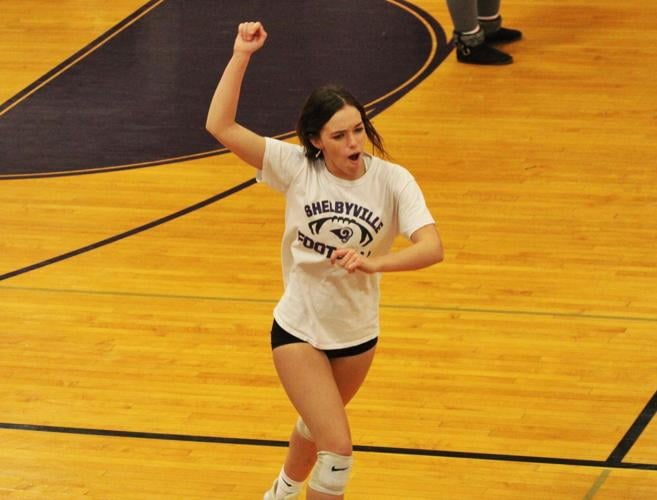 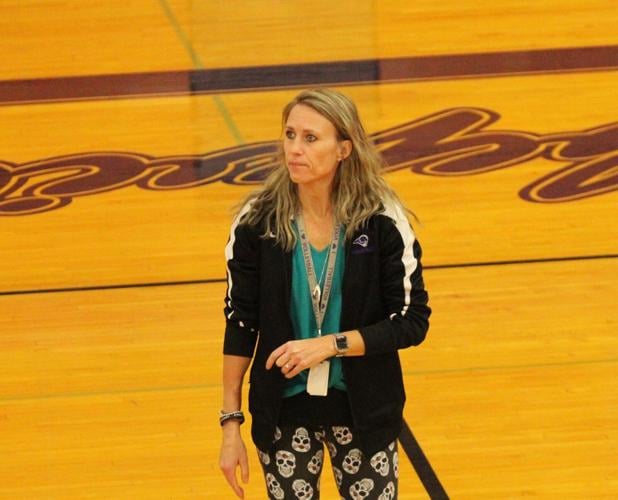 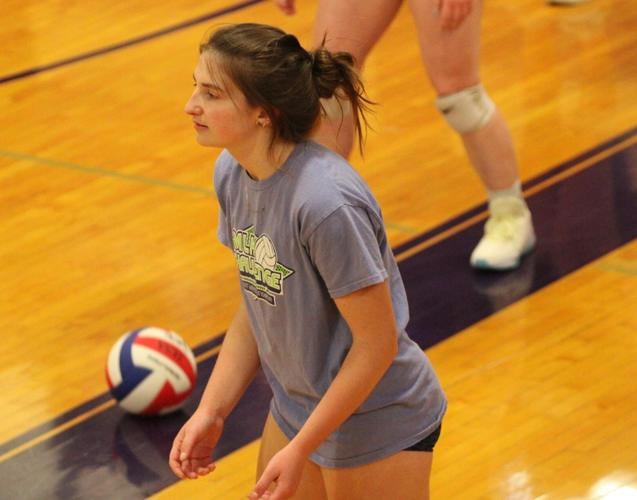 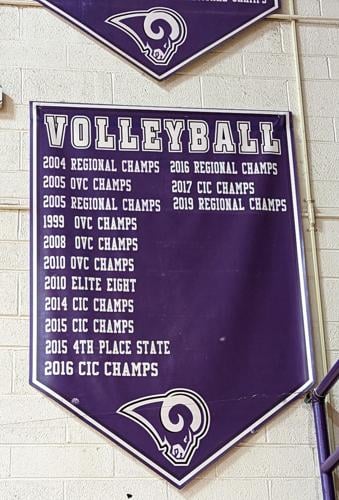