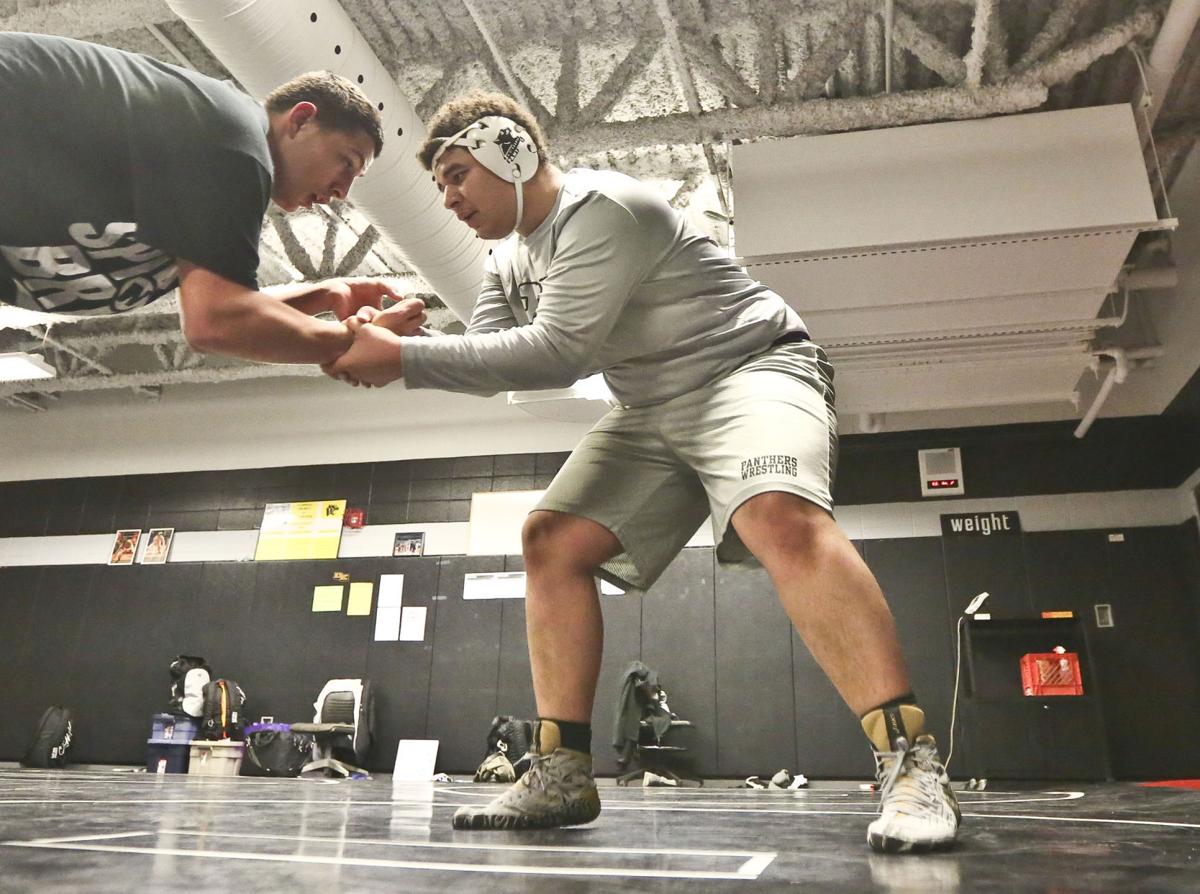 Eisenhower junior wrestler Caleb Guise, right, grapples with Stephon Ball during practice. Guise hopes to make it back to the state tournament this season. 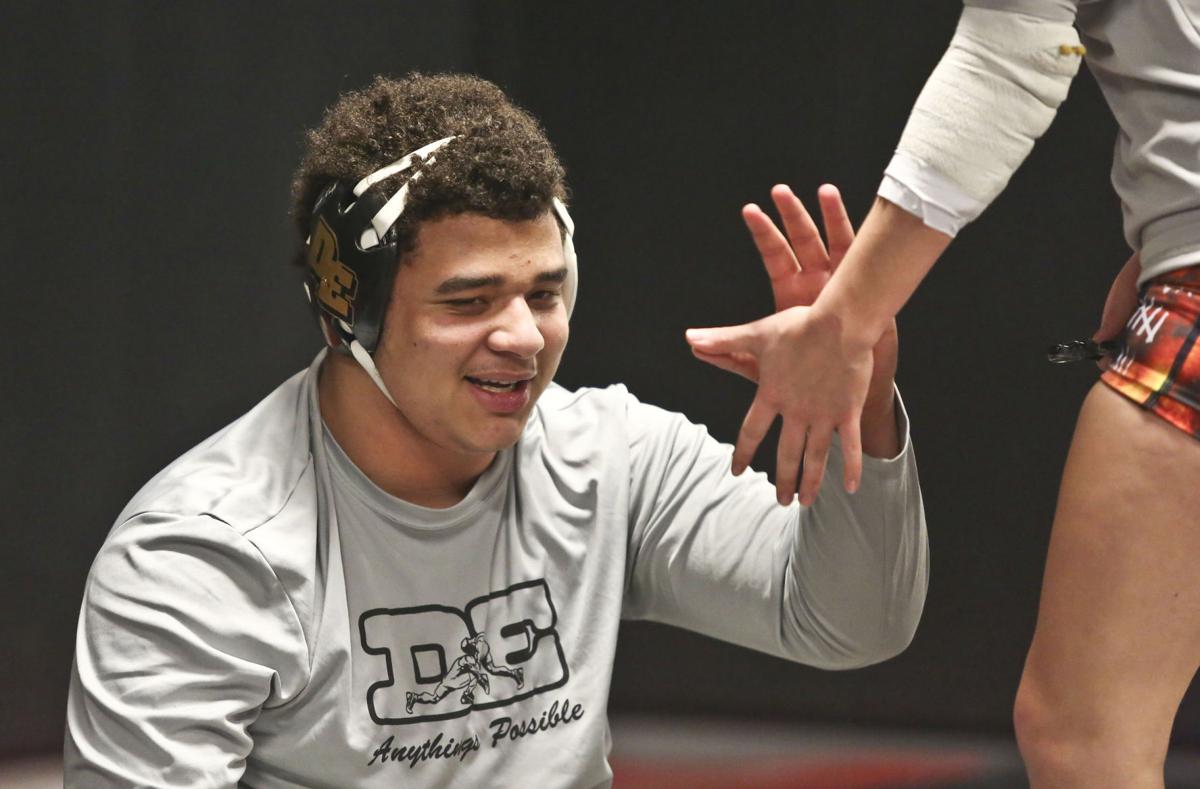 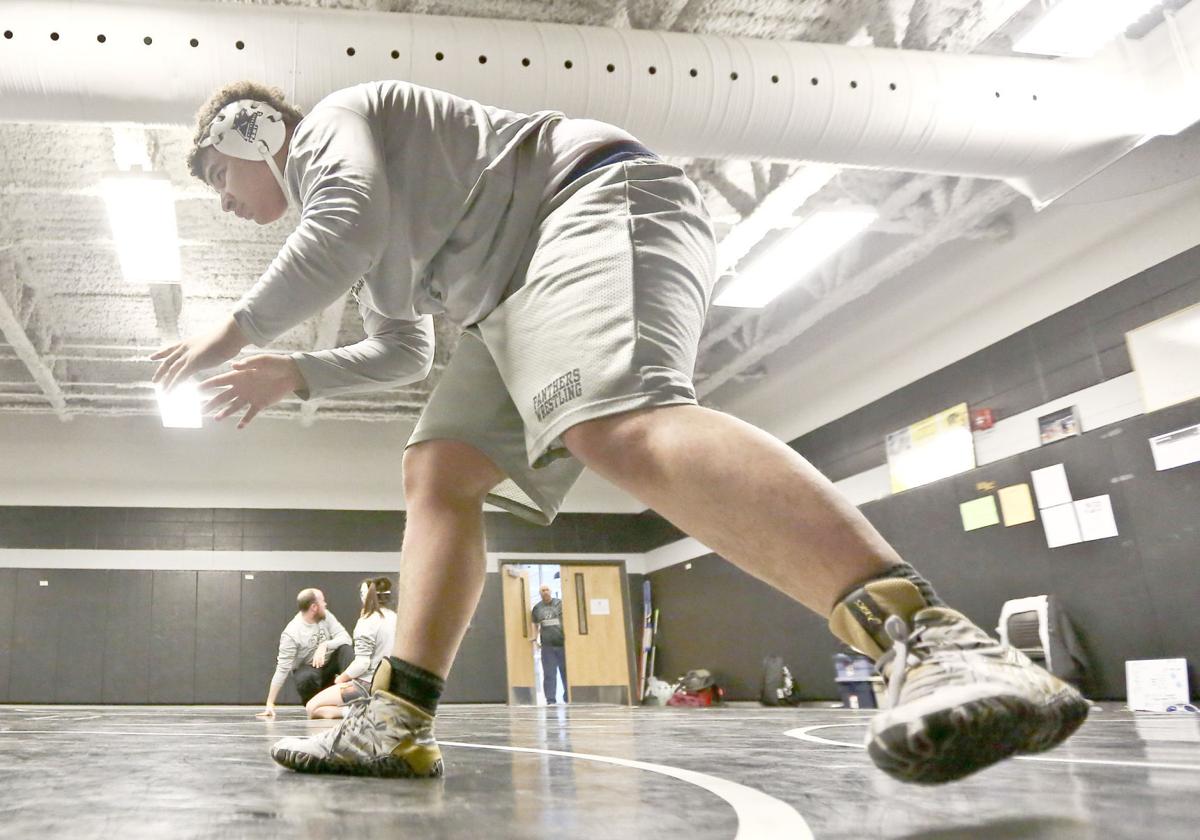 DECATUR — Cable Guise is a rare find in Decatur.

He's a state-tournament-qualifying student athlete at Eisenhower in a sport Decatur forgot — wrestling.

Guise is the junior co-captain of the Panthers' wrestling team and last year qualified for the Class 2A state tournament. This year, with regionals looming on Saturday, Guise has a 30-4 record, including titles at Chatham Glenwood and Argenta-Oreana tournaments.

Although he's got the talent, and the size at 6-foot, 270 pounds, he's faced hurdles to just be able to play the sport he loves in his hometown.

Decatur students interested in wrestling start with one hand pinned behind their back. With no program at the junior high level, high school-aged students wanting to hit the mat are behind their competition in other school districts.

"Our kids who come to high school and, unless they are like Caleb and have been in a program, they have no experience," Eisenhower wrestling coach Jerry Seeforth said. "Most kids, by the time you get to high school, have got anywhere from four to eight years experience, so we are behind the eight ball."

Guise, though, was able to find programs outside of Decatur to wrestle.

"Caleb’s been wrestling since he was in grade school and he's been all over the place wrestling," Seeforth said. "He’s wrestled in Argenta, and he’s wrestled in Clinton programs, since Decatur doesn't have anything."

"I was doing karate and they told me that they offered wrestling. And I always watched the WWE and when I first started wrestling I was like this isn’t anything like that but I like it," he said.

"I always liked the Undertaker when I was younger."

The comparison is appropriate. Guise has been burying his opponents this season and is currently ranked as the No. 4 heavyweight wrestler in 2A by illinoismatmen.com, placing him among the wrestlers who should be vying for a state medal in February.

But his road to state won't be an easy one and, according to Seeforth, Guise will have one of the toughest regional in the state.

"There are four to five kids, heavyweights, in that regional who are tough, top notch," Seeforth said. "You have to wrestle and not make mistakes. I think he’s got a good shot. He’s got to be on top of his ball game."

His regional heavyweight competition includes Nick Langenfeld from Champaign Centennial, Hayden Copass from Westville, and David Griffet from Mahomet-Seymour, who is currently ranked right behind Guise as the No. 5 2A heavyweight.

For Guise, it might be the luck of the draw in who comes out on top at regionals.

Along with the lack of a pipeline of Decatur wrestlers to the high school programs, wrestling has also suffered, Seeforth said, because it isn't compatible with students who want success immediately.

"With kids nowadays if they don’t win and are not successful they don’t hang around," Seeforth said. "We had two seniors this year, we should have had six or eight. We started out with about 20 kids and we are down to seven. I’ve never had it shrink this small.

"But we do the best we can. We put them out on the mat and let them rip."

The smaller team size does have some advantages for Guise.

Seeforth said he appreciates Guise's work ethic and commitment to the sport.

"He’s always here, he’s always working," Seeforth said. "And Caleb's very astute, he is a constant thinker. In this sport, you just don’t go out there and blunder around and do this and do that."

Seeforth, who's been coaching Eisenhower for 17 seasons, is the protypical wrestling coach — a Navy veteran who is tough but fair with his wrestlers.

Guise said he recognizes the work and support his coach provides.

"He’s really hard on me. Some days it’s hard to tell and some days he just bashes me," Guise said, smiling. "But I know when it comes down to it he’s going to do whatever it takes for me and I really appreciate it."

Time on the line

Guise has succeeded on the mat this season despite adversity during the football season.

Guise's size caught the attention of the Panthers' football coaches, who approached him to join the team last fall.

"They asked me to come out and I needed to stay in shape so I went ahead and went out," he said.

Guise played one game on the line at right guard before he developed an increasing pain in his legs.

"I played one game and in the next game I couldn’t run — it was hurting too bad," he said. "I went to the doctor and they gave me a bone scan and they said I had hairline fractures in both my tibias. So I had to stop playing football because wrestling is my main sport."

In the history of Eisenhower wrestling, there have had two state medalists.

Baker's achievement coincided with Guises' freshman year and he witnessed Panthers history first hand and how hard work can lead to success.

"With Matt and Caleb, there was a good rapport there," Seeforth said. "Matt was a hard worker, he had a motor on him that was going 150 miles per hour all the time."

As a freshman, Guise was getting used to the change of wrestling 13-year old kids in middle school to facing 18-year old adults at the high school level.

"Matt and I wrestled a lot and he was really good. He always liked to see someone get better so we worked a lot," Guise said. "Coming in from eighth grade and wrestling kids, it was a really big difference to go against someone like him."

Finding state-level success a sophomore has Guise stepping into leadership roles at school and on the mat as a junior, something he's getting used to.

"It’s hard balancing wrestling and school," Guise said. "At Eisenhower, if you are an athlete you have to be on your queues, they always want you to be a role model. You can’t fly under the radar.

"As team captain, I’ve always got to make sure we are ready because even though we have a small team, the refs always make sure the captains have the team’s wrestlers ready to go."

And although wrestling doesn't grab the headlines at Eisenhower, Guise loves his sport.

"The really big sport here is basketball. They do say something about us on the intercom every now and then," he said. "But wrestling in general I feel like doesn’t get enough recognition.

"What I like about it is, you can’t blame anyone else for your failures or successes because it is all you."

DECATUR -- The No. 18-ranked Millikin wrestling team split a pair of duals in the 'Wrestling at Kirkland' event held Thursday at Millikin's Ki…

Far from average: Millikin wrestling thrives in its new home

DECATUR — When Millikin restarted its wrestling program after a seven-year absence, Millikin athletic director Craig White had expected an 8- …

SHELBYVILLE — Benton Freeseman doesn't hide behind anything. In fact, the Monticello wrestler stands in the spotlight to support his cause.

DECATUR — When Cheyanna Bork announced she wanted to wrestle for MacArthur as a freshman, she encountered heavy resistance.

Eisenhower junior wrestler Caleb Guise, right, grapples with Stephon Ball during practice. Guise hopes to make it back to the state tournament this season.