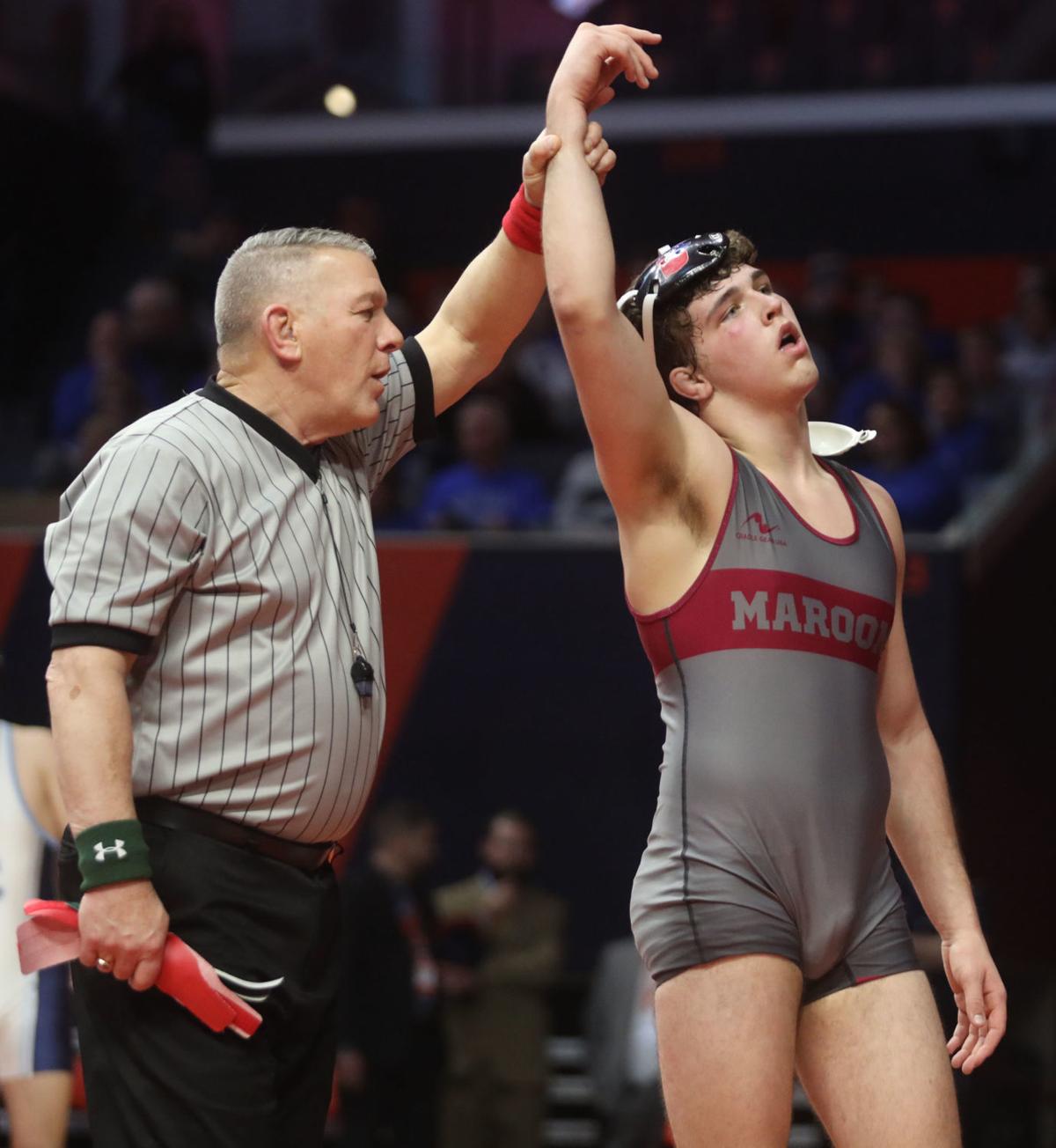 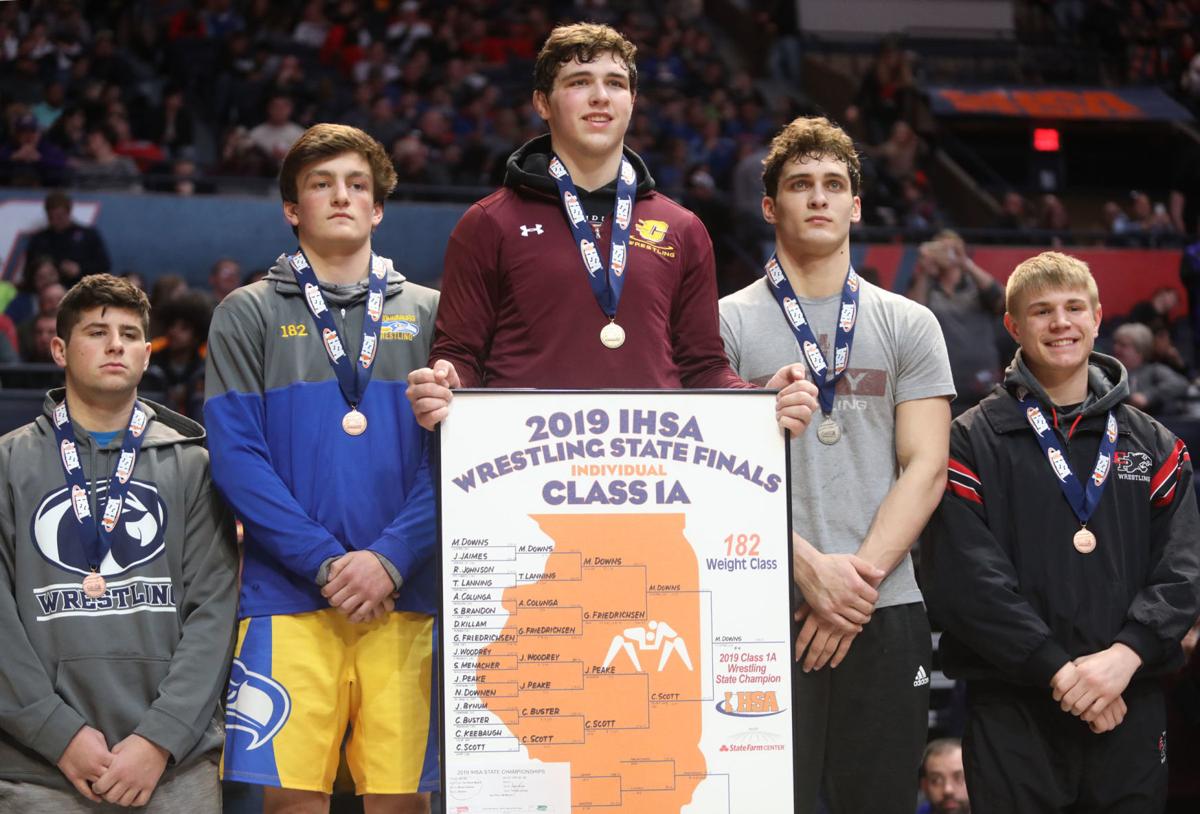 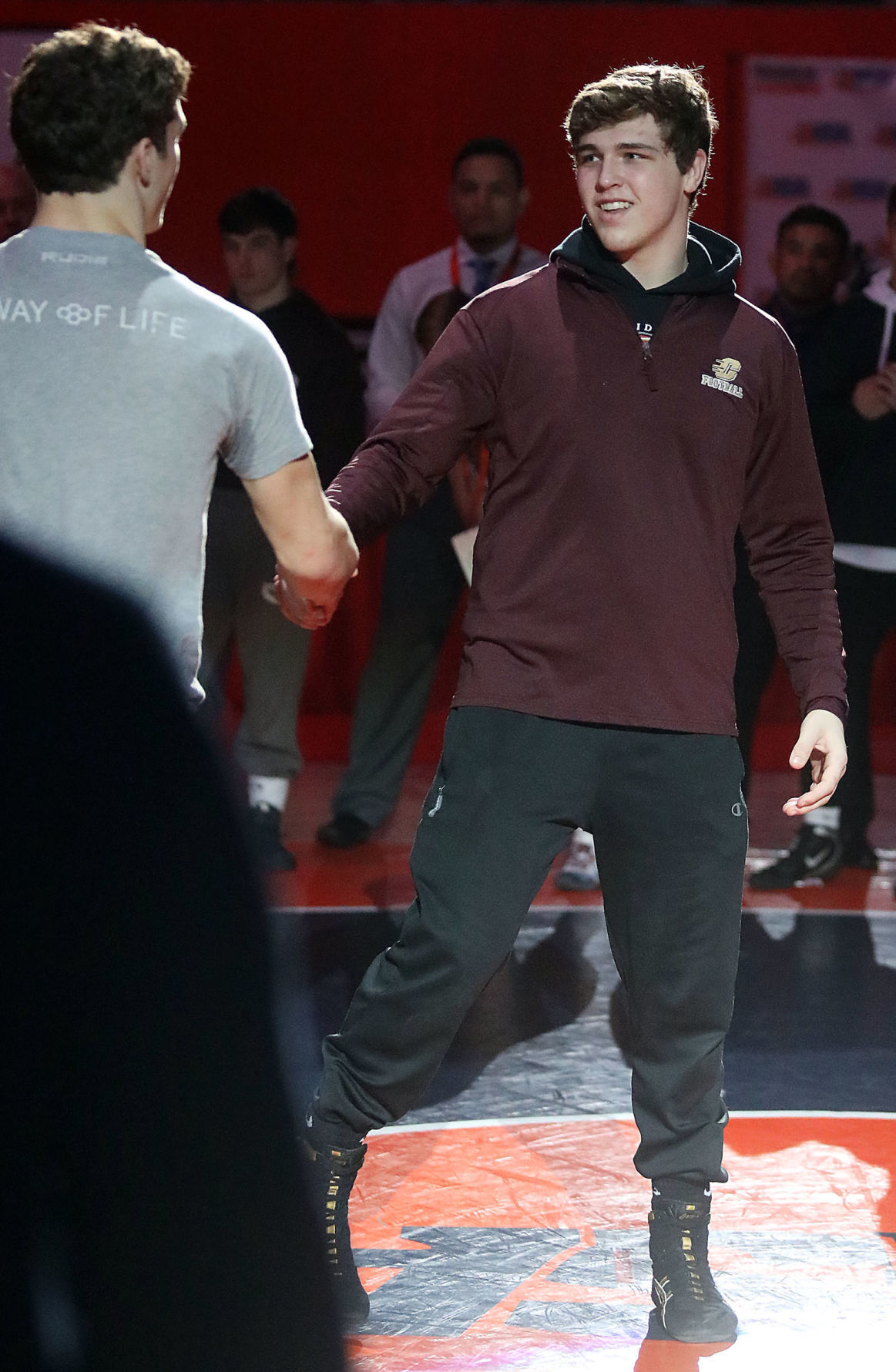 Clinton's Micah Downs is introduced during the Grand March before his 182-pound championship match. Downs became the first Clinton wrestling champion since the 2001-02 season. 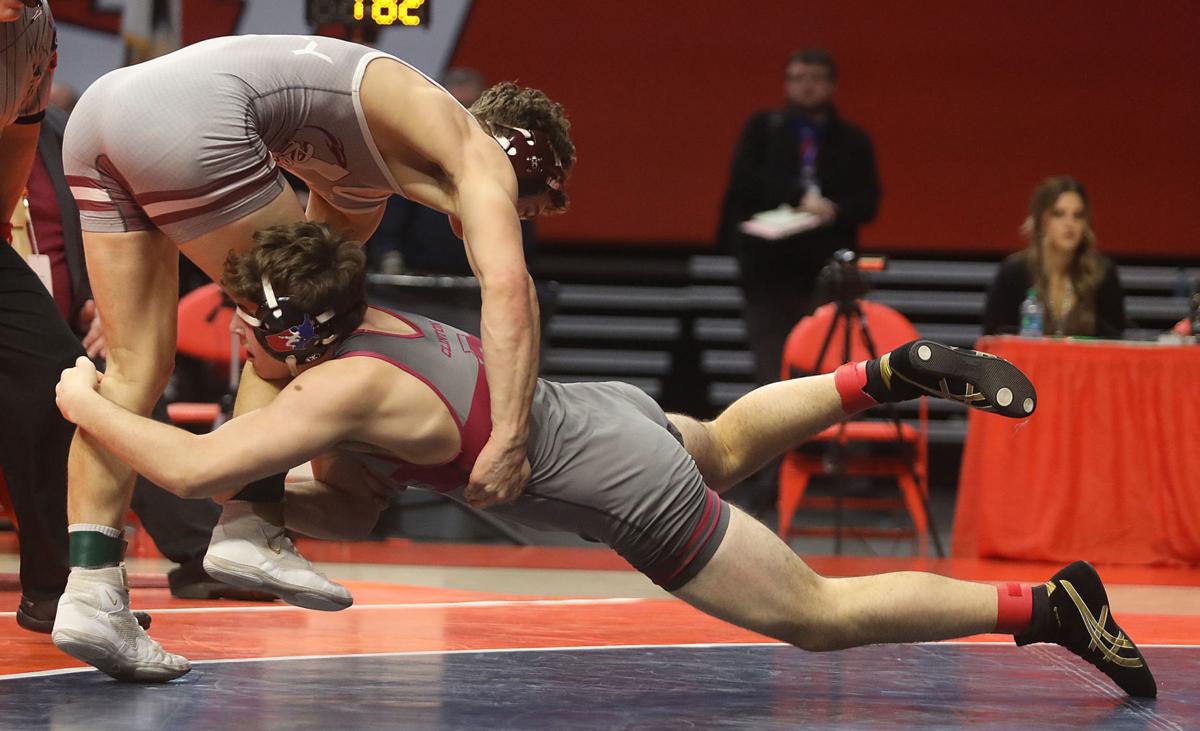 Clinton’s Micah Downs dives to keep a hold of Tolono Unity’s Cade Scott in the Class 1A 182 pound state championship match at The State Farm Center.

CLINTON — When Clinton wrestler Micah Downs was facing his off-season training partner Cade Scott from Tolono Unity at this year’s Class 1A state tournament there was more on the line than the Class 1A state title at 182-pounds.

“We made a deal that the winner had to buy the other one a milkshake at Steak ‘n Shake,” Downs said.

Downs capped off his season and surpassed his third-place finish from last year with an 8-4 decision over Scott to become the first Clinton wrestler since 2002 to be crowned state champion. The junior is also the Herald & Review’s 2019 Area Wrestler of the Year.

In winning the title, Downs avenged a defeat against Scott from earlier in the season and will soon have to pay up on his milkshake debt.

“We’ve talked about and I’ve joked with him about it," Downs said. "I owe him that milkshake and I start working with Cade this coming week. I'm looking forward to it."

Downs is already in full offseason training mode after taking a couple of days off following the tournament.

“The first week after state is about the best week of training you can get," Downs said. "You can eat and you don’t have to worry about cutting weight."

Along with Scott, Downs keeps some elite off-season practice company. He also trains with Fairbury Prairie Central's Brandon Hoselton, who went 49-0 and won a Class 1A state title at 195 pounds last year.

Downs’ improved training was the key to his championship and his next goal — a repeat title.

"Brandon and Cade, they have pushed me each time I’m on the mat with them,” Downs said. “In the past, I took third and I would train to be on the podium rather than on the top of it. If I felt I put in a good workout I would stop, but that not nearly good enough for my training now.

“I’ve got to push it as far as I can go every time and push my limits.”

For Clinton wrestling coach Matt Cooper, Downs is the rare wrestler who is a self-starter and knows the amount of work required to be on top of the podium.

“Micah leads by example and puts in the work in the room," Cooper said. "Every coach preaches that, and really it only reaches a couple of kids sometimes, but it reached him for sure.

“The example he sets in the room is great. It means a great deal and we talk about (winning a championship) all the time and it is great that he was able to achieve it.”

Downs also has a confidence in his ability far beyond his years.

“Nothing really seems to get to the kid," Cooper said. "Even his few loses ... sometimes as a coach I wish he was a little more mad about them but he always fixes what he needs to fix and moves on."

A state champ on the mat, Downs also brings the same mentality to the Maroons’ football team as a linebacker.

“I think I was born and raised to be a leader and push myself," Downs said. "As far as competing, I feel like I can be and I’m going to be the most dominating athlete whether it is wrestling or football.

“It definitely grows in the weight room and grows in my training and on the mat. When you train hard, that comes to mind before and during competition.”

Downs’ road to a repeat will get a little bit harder as several teams will be reclassified into Class 1A — including the Class 2A second-place squad from Coal City. Even with the added competition, Downs remains his confident self in the face of the challenge.”

“I think whatever weight class that I decide to compete in, I think it will be the toughest year of my wrestling career,” he said. “With Coal City dropping down, they always have tough kids and there are a lot of athletes and well trained wrestlers that will be coming back. It will be a tough year but I think I will handle it well.”

“At the end of the day the job isn’t finished yet so there is more to look forward to.”

CHAMPAIGN — After winning his semifinal match on Friday, Clinton wrestler Micah Downs looked up at the scoreboard and saw his off-season train…

CLINTON — Week 9 of the football season proved to be an unusual one for several members of the Clinton wrestling squad.

VANDALIA — Navigating a wrestling team through the dual team state finals tournament can test even an experienced coach.

Clinton's Micah Downs is introduced during the Grand March before his 182-pound championship match. Downs became the first Clinton wrestling champion since the 2001-02 season.

Clinton’s Micah Downs dives to keep a hold of Tolono Unity’s Cade Scott in the Class 1A 182 pound state championship match at The State Farm Center.