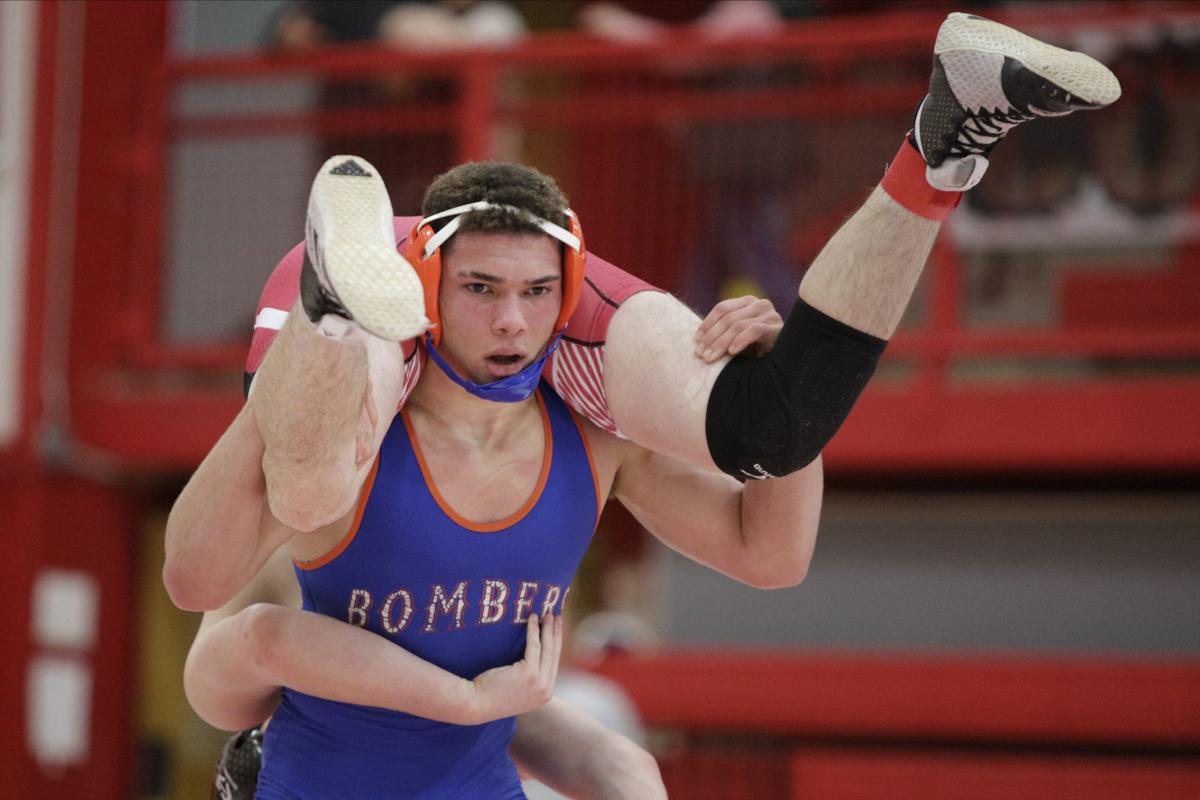 Argenta-Oreana's Makail Stanley takes an opponent airborne during Saturday's 1A Vandalia Sectional. Stanley makes his second appearance at the state tournament on Thursday. 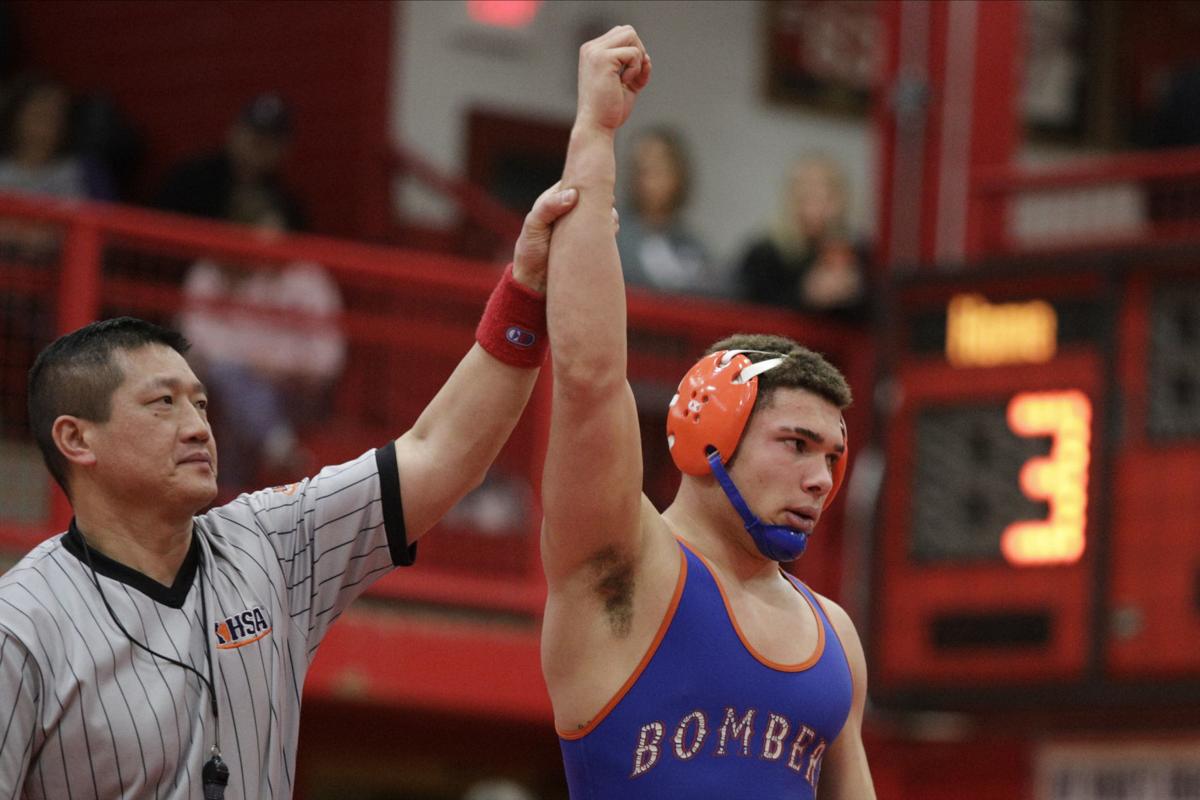 Argenta-Oreana's Makail Stanley is declared the winner during Saturday's 1A Vandalia Sectional. Stanley is the No. 1-ranked wrestler in Class 1A according to IllinoisMatsMen.com 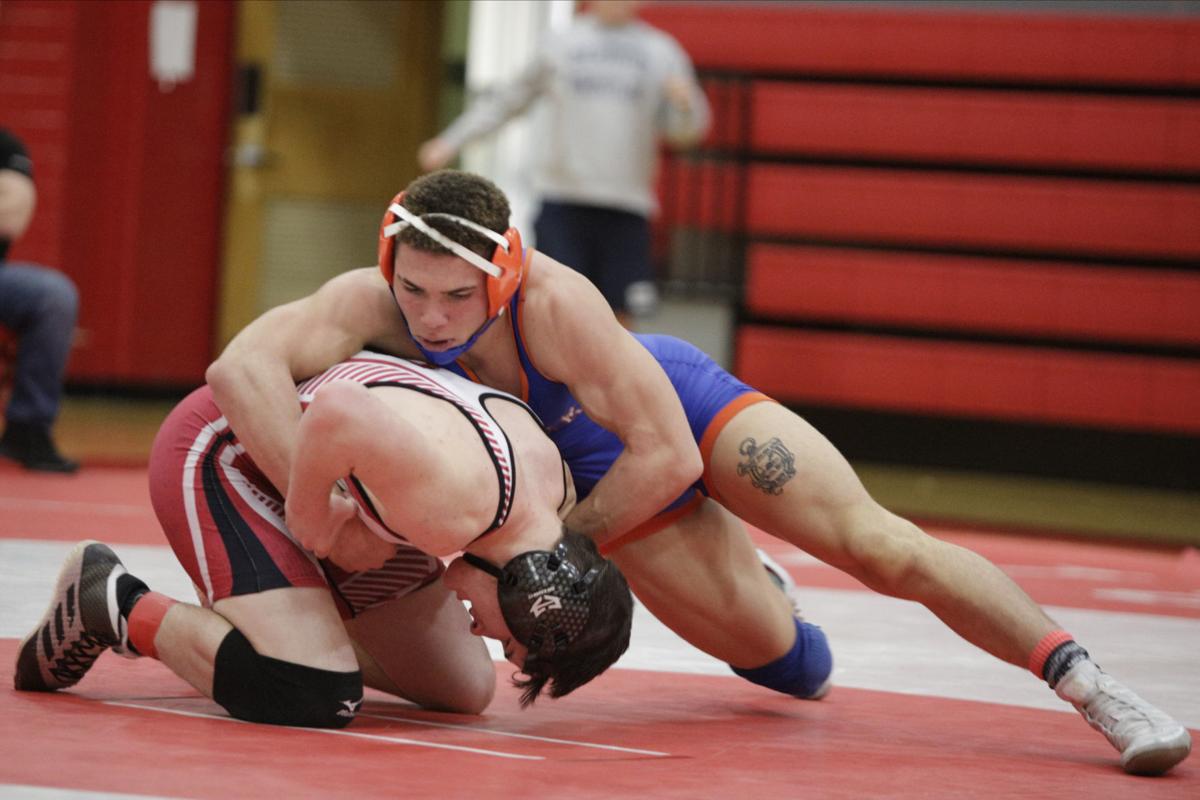 Argenta-Oreana's Makail Stanley finished third at the 1A Vandalia sectionals on Saturday and is making his second trip to the state tournament this week.

ARGENTA — Argenta-Oreana’s Makail Stanley entered the Class 1A Vandalia Sectional as the odds-on favorite at 160 pounds.

The Bombers senior was the No. 1-ranked 1A wrestler at 160 by both illinoismatmen.com and the Illinois Wrestling Coaches and Officials Association. He had picked up tournament championships at PORTA, Clinton, Prairie Central, Argenta as well as regionals. The only loss of his 37-1 season was to Logan Deacetis from Prairie Central, the reigning state champion at 160 pounds.

But Stanley ran into Tolono Unity's Pate Eastin, a regional champion himself, in the semifinals and the two ground each other down as Eastin ultimately won a 1-0 decision.

It’s the kind of setback that could shake a lesser wrestler. Stanley now faced a blood round match that could've ended his high school wrestling career.

Instead, Stanley pinned Vandalia’s Tiler Worker and then pinned Cumberland’s Iysten Syfert at 1:47 to take third place at sectionals.

"My coach has been preaching to me since the beginning that we just have to make it through regionals and sectionals. When you step on those state mats, you are 0-0," Stanley said. "I'm just looking to move on to win the state championship."

In Stanley's loss, the difference between victory and defeat was minuscule.

"I always use a loss as a motivation," Stanley said. "You have to make the most out of each person’s mistakes and when it is that close you pick apart every little detail because you remember that match so well.

"(After my first loss) that whole next week I dedicated the week to being able to beat that kid again if I faced him."

Stanley only has a few years of wrestling experience, picking up the sport in high school and qualifying for state last season. His growth from his junior to senior year has been substantial, said Argenta's wrestling coach Matt Morlock.

"(Makail) has improved tremendously this year," Morlock said. "His strength overall has improved and he has gotten better on his feet. He’s been a lot better riding and he broke the career record for takedowns."

Stanley's final pin at sectionals set a Bombers' record for pins in a season at 30. It was a record that snuck up on him.

"Actually the last practice we had on Friday I was glancing at the records in the wrestling room and I was like 'Coach how many pins do have?' Sure enough, I was two off from tying it and so I broke it today," he said.

It's hard to imagine that the same athlete that ran for 1,913 yards and averaged 11.6 yards per carry with 28 touchdowns during football season has gotten even stronger and faster, but Stanley has done just that in moving from the 185-pound class down to qualify for state at 160.

"I think my technique and overall anything that has to do with being a top wrestler is better," Stanley said. "(Before,) I wasn’t really good on top. I was good on the bottom and good at shooting but my top game really lacked skill. Gradually, my coach has been working with me and really pushed me on small little things and those things add up to make me who I am and how I wrestle."

Getting down to 160 is a testament to Stanley's ability to set a plan and follow through with it.

"Really it is discipline. If you don’t have discipline, it makes it very hard. If you do it makes it substantially easier but again when you are going three days without a lot of food, it is hard," he said.

His go-to meal when trying to make weight is a surprise and his post-state tournament meal has already been decided.

"My favorite during the season is a nice Snickers bar. One Snickers for dinner is perfect. I destroy it," he said. "Outside of state, I'm going to Fat Sandwich in Champaign. It is wonderful. It’s college food; it’s amazing. I have a card so I’m almost up to a free one and so after state I’m getting a free Fat Sandwich."

Before then though, Stanley has some unfinished business at state.

"Last year I didn’t know what to expect. I knew it was going to be big crowds and a great environment but this year I know exactly what I’m walking into and I can’t take any shortcuts this coming week," he said. "I’ve got to push myself harder than I’ve ever been pushed before. That’s the only way you can hang with these guys going into state.

"You are both great wrestlers and you are both decorated and it is either you or him."

Who to watch at state

Argenta-Oreana's Makail Stanley takes an opponent airborne during Saturday's 1A Vandalia Sectional. Stanley makes his second appearance at the state tournament on Thursday.

Argenta-Oreana's Makail Stanley is declared the winner during Saturday's 1A Vandalia Sectional. Stanley is the No. 1-ranked wrestler in Class 1A according to IllinoisMatsMen.com

Argenta-Oreana's Makail Stanley finished third at the 1A Vandalia sectionals on Saturday and is making his second trip to the state tournament this week.